App analytics company App Annie is today out with its newest report, a retrospective look back at the industry during 2016. The report claims that the total number of app downloads, across both Android and iOS, increased to over 90 billion during the year, an increase of 13 billion compared to downloads during 2015.

While App Annie doesn’t offer split data for the iOS App Store and Play Store, downloads from Apple’s storefront increased more in 2016 than they did in 2015. The Play Store, however, accounted for the majority of the 15 percent total year-over-year growth.

Additionally, the time users spent inside of apps grew by 25 percent in 2016 versus 2015. The biggest growth sector for time spent in apps was shopping, with App Annie’s data showing that time spent in shopping apps was up 30 percent year-over-year in the United States. Though, users still spent the most amount of time in messaging and social apps. 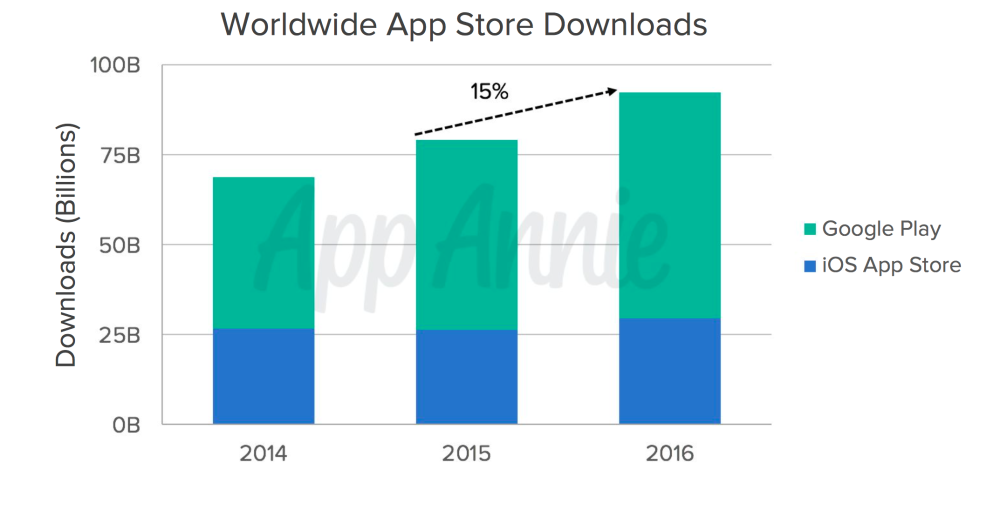 Furthermore, revenue paid out to publishers was also up during 2016, with that number increasing by 40 percent year-over-year. As has become the common trend, Google’s Play Store accounted for more downloads, but the iOS App Store brought in a higher amount of revenue for developers.

Worldwide revenue app revenue across the Play Store and App Store cracked $35 billion, but as you can see in the chart above, the App Store accounts for the majority of that revenue. iOS App Store revenue also grew at a faster rate in 2016 than the Play Store, with revenue growing by almost 50 percent compared to the 40 percent for the Play Store.

As Apple continues to spin itself as a services company, the new data from App Annie only strengthens the argument that services are where the revenue is.