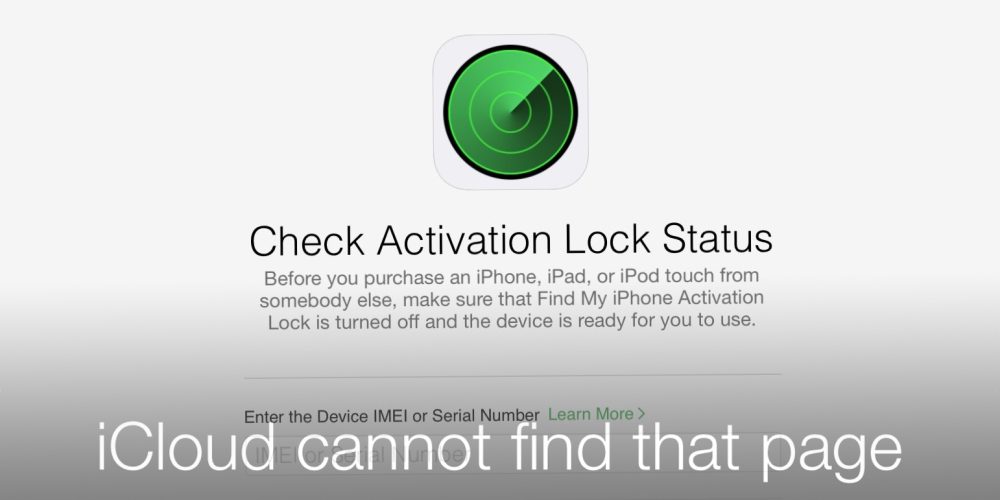 Apple has inexplicably removed the iCloud Activation Lock status page, which used to exist at iCloud.com/activationlock, but that URL now leads to a 404 error instead. The utility let anyone type in the IMEI or serial number of an iOS device to find out if Activation Lock had been turned off, handy to verify the authenticity of a seller when buying a used iPhone online.

References to the web page have been removed from Apple’s support documentation, indicating this is not a temporary issue and the page has been intentionally pulled from service …

This Apple support document used to (see screenshot) recommend people check the Activation Lock status of a used iPhone, iPad or iPod touch before buying it to ensure the product will be ready for you to use. The text was removed on January 24th and the iCloud.com/activationlock URL stopped working sometime last night.

An alternative way to find out if an iOS device is Activation Locked without having the product in your possession is not given.

It isn’t clear why Apple would take away such a useful utility. The ability to check if the device was still locked helped to prevent online sites from illegally selling stolen iPhones.

For a while, it was a common scam to put stolen iPhones on sites like eBay at a low price, turning a quick sale for the buyer to find that the device was effectively unusable as the Activation Lock was active.

Apple’s online advice says to not ‘take ownership of any used iPhone, iPad, or iPod touch until it has been removed from the previous owner’s account’. This simply isn’t possible to verify now for online transactions, if the Activation Lock status tool does not return.

Activation Lock has been enabled by default for iOS devices since iOS 8; it prevents anyone from activating a device without providing valid Apple ID credentials of the owner — dramatically cutting the value of stolen iOS devices on the black market.

Activation Lock is available — and enabled by default — on all new iPhones, iPads, iPod touch devices and Apple Watch units. Users can disable Activation Lock on their own devices through the Find My iPhone app.

Update: Many commenters have noted the following video in the last 48 hours, showing how Apple’s tool was used maliciously.