Following Apple’s “record” quarter it reported yesterday, Strategy Analytics is today out with new data showing the performance of the Apple Watch during the holiday quarter. Apple touted yesterday that its wearable had a record quarter and today’s data further reflects that strong performance…

As a whole, the smartwatch industry was up 1 percent year-over-year to 8.2 million in 2016. That growth is almost entirely attributed to Apple’s success during the holiday quarter.

According to the data, Apple Watch secured a marketshare of 63.4 percent last quarter, while Samsung came in second place with 9.8 percent of the market. In terms of shipments, Apple Watch saw shipments of 5.2 million during the quarter up slightly from 5.1 million in the last quarter of 2015.

Apple’s success during the quarter allowed the company to clear a large backlog of inventory. Demand for the Apple watch Series 2 was “surprisingly strong” during the holiday quarter in western markets, as well.

Demand for Apple’s new Watch Series 2 as a holiday-season gift in Western markets was surprisingly strong and it enabled Apple to clear a large backlog of smartwatch inventory during the quarter. ”

Apple isn’t in any danger of falling to Samsung, either. The company reported just 800,000 smartwatch shipments during the holiday quarter, down 38 percent year-over-year from 1.3 million in Q4 of 2015. 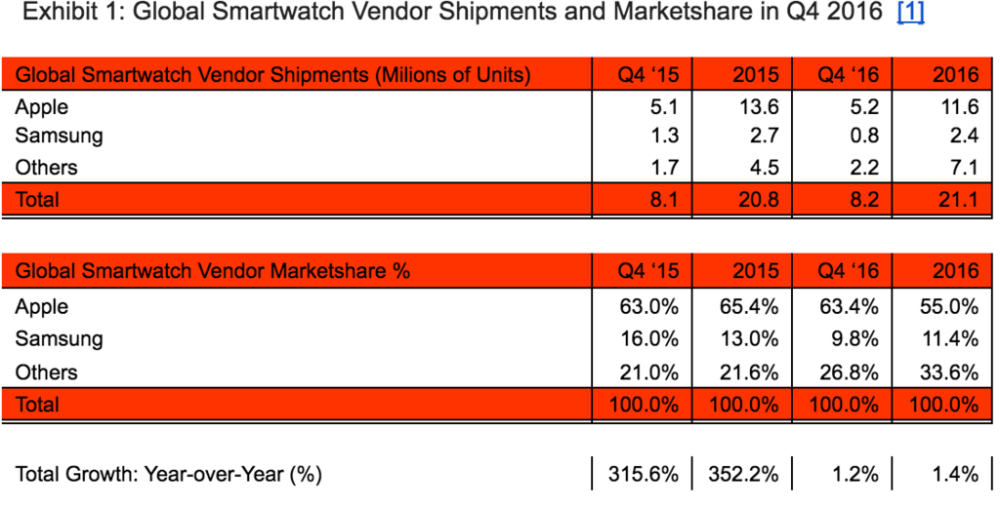 During yesterday’s earnings call, Tim Cook continually highlighted the fact that Apple Watch saw a record quarter during the holiday season, noting that holiday demand was so strong that Apple couldn’t keep up with it. Apple itself doesn’t break out sales of Apple Watch, citing competitive reason, thus making analyst firms like Strategy Analytics one of the best sources for estimates, though they aren’t guaranteed to be entirely accurate.

As for Apple as a whole, the company yesterday reported profits of $17.89 billion on revenues of $78.4 billion. The company sold 78.3 million iPhones, 13 million iPads, and 5.3 million Macs, as well. Read our full coverage of Apple’s Q1 earnings call, which featured remarks from Tim Cook and CFO Luca Maestri, as well as Q&A.