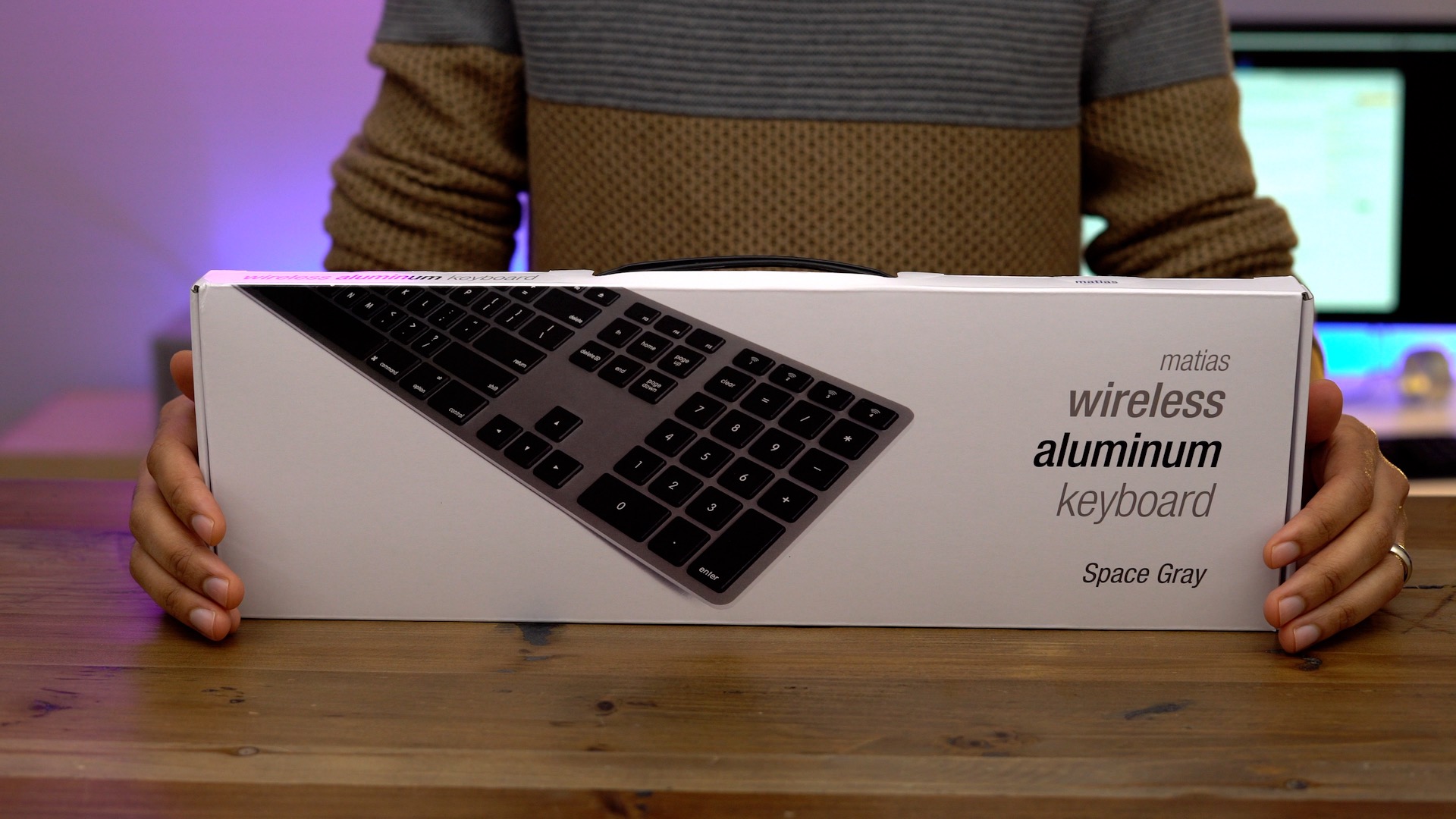 Although I’m a big fan of tactile, clicky mechanical keyboards, I also enjoy the sleekness, quiet keys, and wireless nature of Apple’s Magic Keyboard. I wish Apple would make a full-size Magic Keyboard, but that doesn’t seem to be happening any time soon.

Thankfully Matias, a computer accessory manufacturer that’s been around since the 90s, is offering its own take on what an Apple-made full-sized wireless keyboard could be like. The end result — the $99 Matias Wireless Aluminum Keyboard — is an impressive rendition of Apple design principles, coupled with a few bonus features that truly make this keyboard worth considering.

Have a look at our full video walkthrough for a hands-on look at the Space Gray version of Matias’ Wireless Aluminum Keyboard.

The Matias Wireless Aluminum Keyboard is available in four colors — Silver, Space Gray, Gold, or Rose Gold — that allows it to complement any color of MacBook or MacBook Pro. The Space Gray and Gold versions feature black key caps, while the Silver and Rose Gold colors feature white key caps. 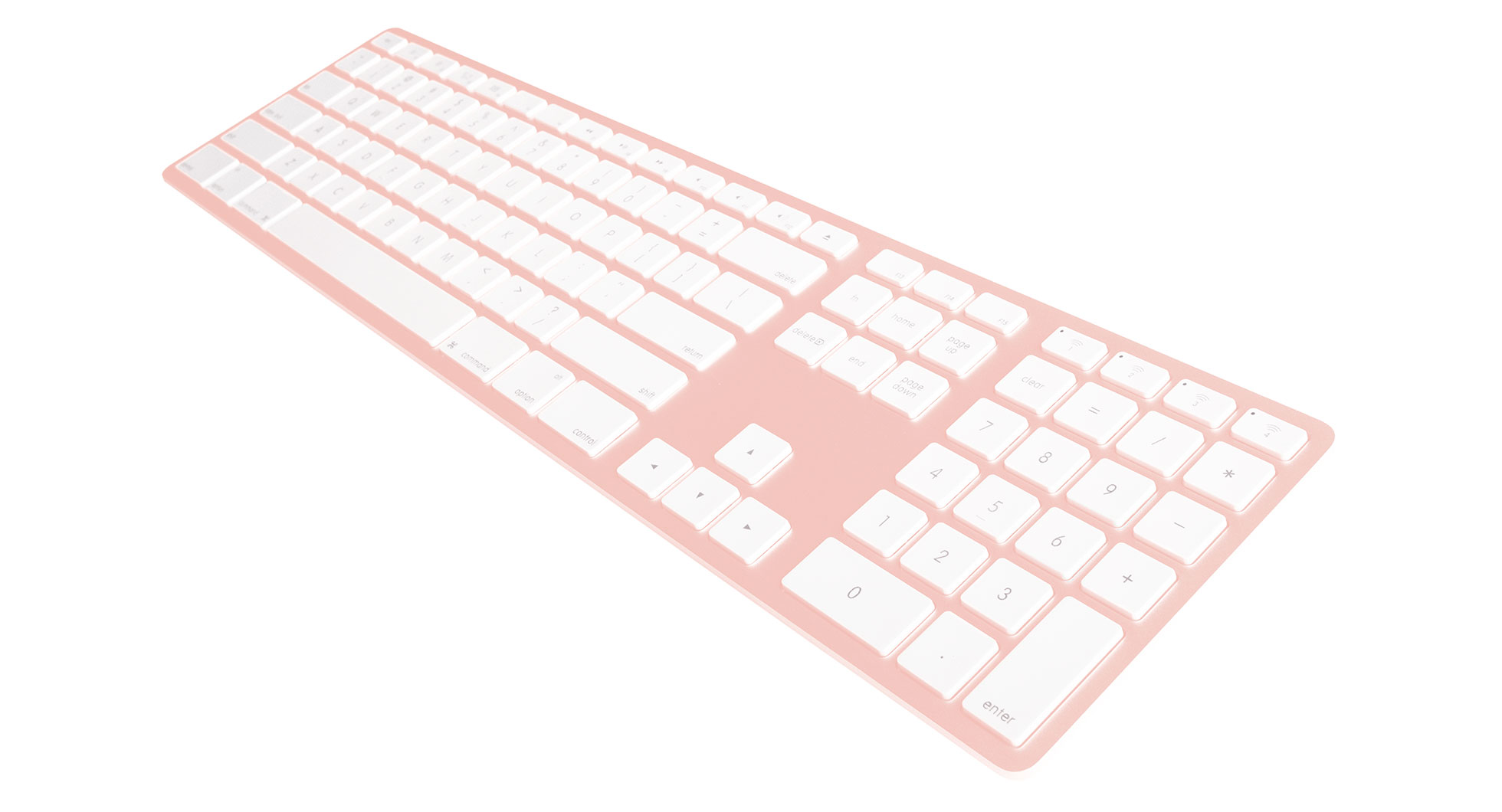 Needless to say, I think that Matias did a great job of nailing the Space Gray version that I’m currently testing, as it matches the 2016 MacBook Pro about as well as one could reasonably expect. I’m assuming that the other three colors are just as good, but I’ve not yet compared them in person. 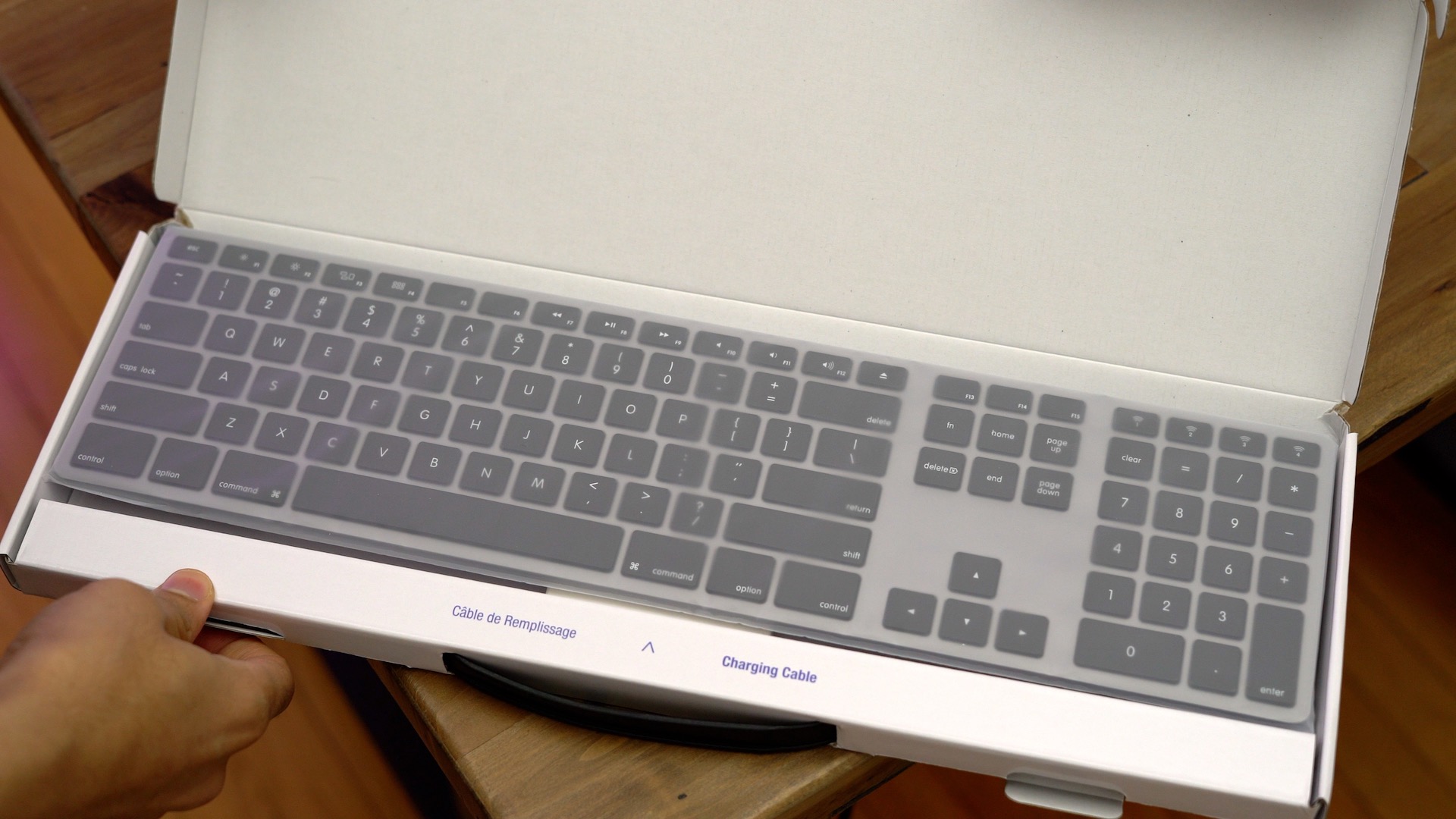 The keys themselves, while not underpinned by the much-improved butterfly switches that are found on the latest MacBook Pro, feature significantly more key travel, and are relatively stable no matter where you press on a key. I found that I could type fast on this keyboard, and didn’t experience any out of the ordinary key input issues. 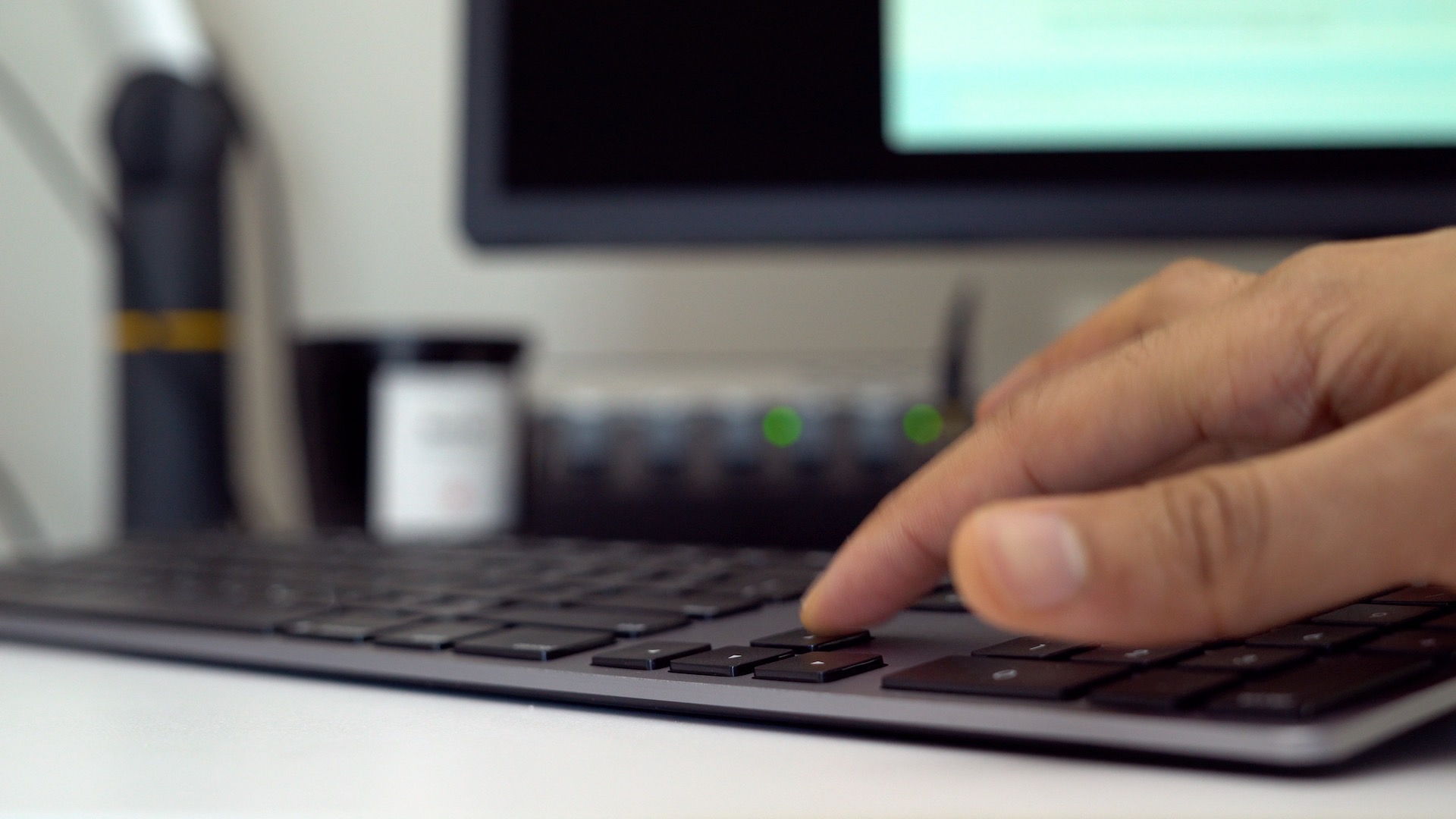 The keys on the keyboard are not backlit, but Matias is producing two versions with backlighting that are currently available for pre-order (shipping in June). The Backlit Wireless Aluminum Keyboard will come in two colors, and feature a separate battery dedicated to the backlight. 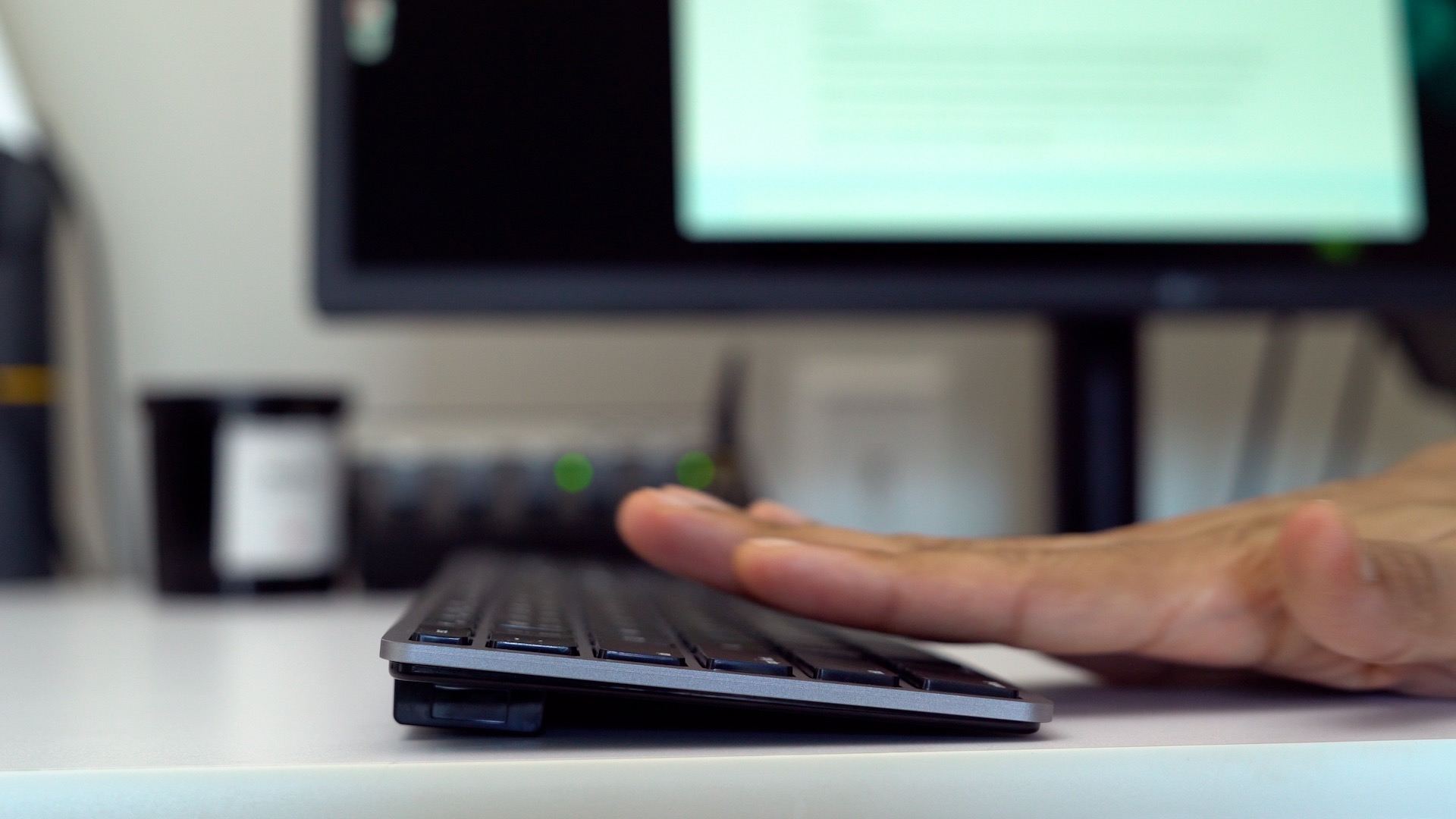 The four rubber feet on the bottom of the keyboard do a good job of keeping the keyboard stable on the desk while typing. However, you won’t find any legs on the bottom to adjust the typing angle. Depending on the way you type, this could pose an issue with adjusting to the keyboard’s angle. 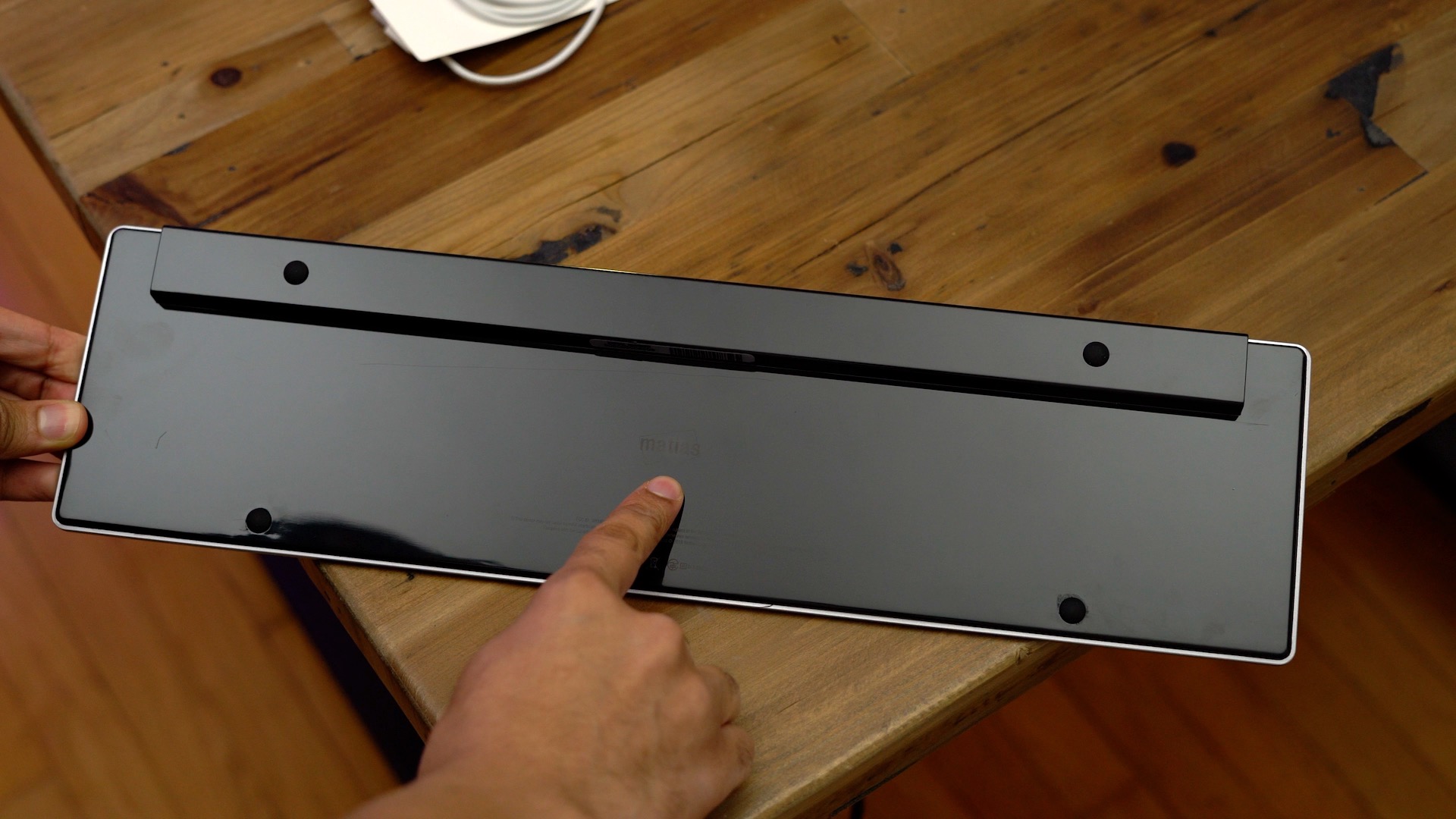 It’s been a while since I’ve used Apple’s full wired keyboard with number keys, but if memory serves me correctly, the build quality between it and this keyboard is similar. The Apple-built keyboard may be slightly superior in overall build quality, as I did notice a little bit of play on the edges of the Matias hardware when pressed, but no one’s going to do that in real world usage, and that’s probably being overly critical.

The most impressive thing about this keyboard is its battery life. Matias includes a 1,600mAh battery, which it claims is 5x to 12x larger than competing hardware. The result is a keyboard that can be used for a year on a single charge.

Included in the box is a USB charging cable, which features a full-size USB-A port on one end, and a right-angle micro USB plug on the opposite end. As much as I hate micro USB, I don’t mind it as much considering that I’ll only need to charge the keyboard once a year. 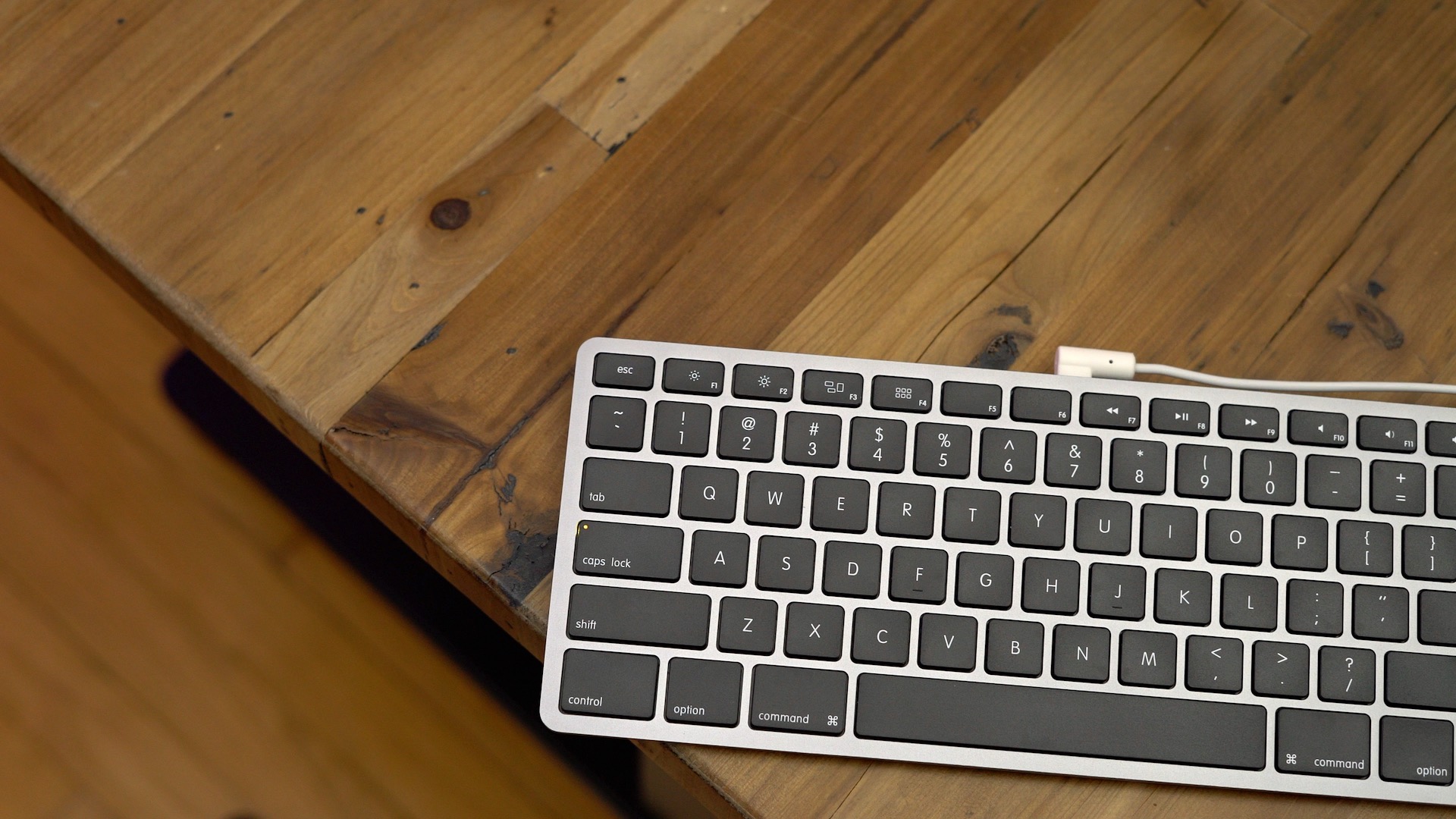 The micro USB port for charging is located on the front of the keyboard, along with the unit’s power button. Charging that keyboard takes around 5 hours, and the Caps Lock key light shines amber while charging.

Although there is a power button on the same front panel as the USB port, you’ll rarely need to use it. Once the keyboard is on and paired with your devices, you can leave it that way. Because the keyboard features such a large battery, it stays on and stays connected, which means that there should be no delays on the hardware side of things when you sit down for work.

But what makes this keyboard special is that it does two things that Apple has quarantined to two separate products. If you want a full-size keyboard in Apple’s world, then you have to live with having a wired connection. But if you want wireless, you have to ditch the number pad, and the rest of the amenities that come with a larger keyboard. 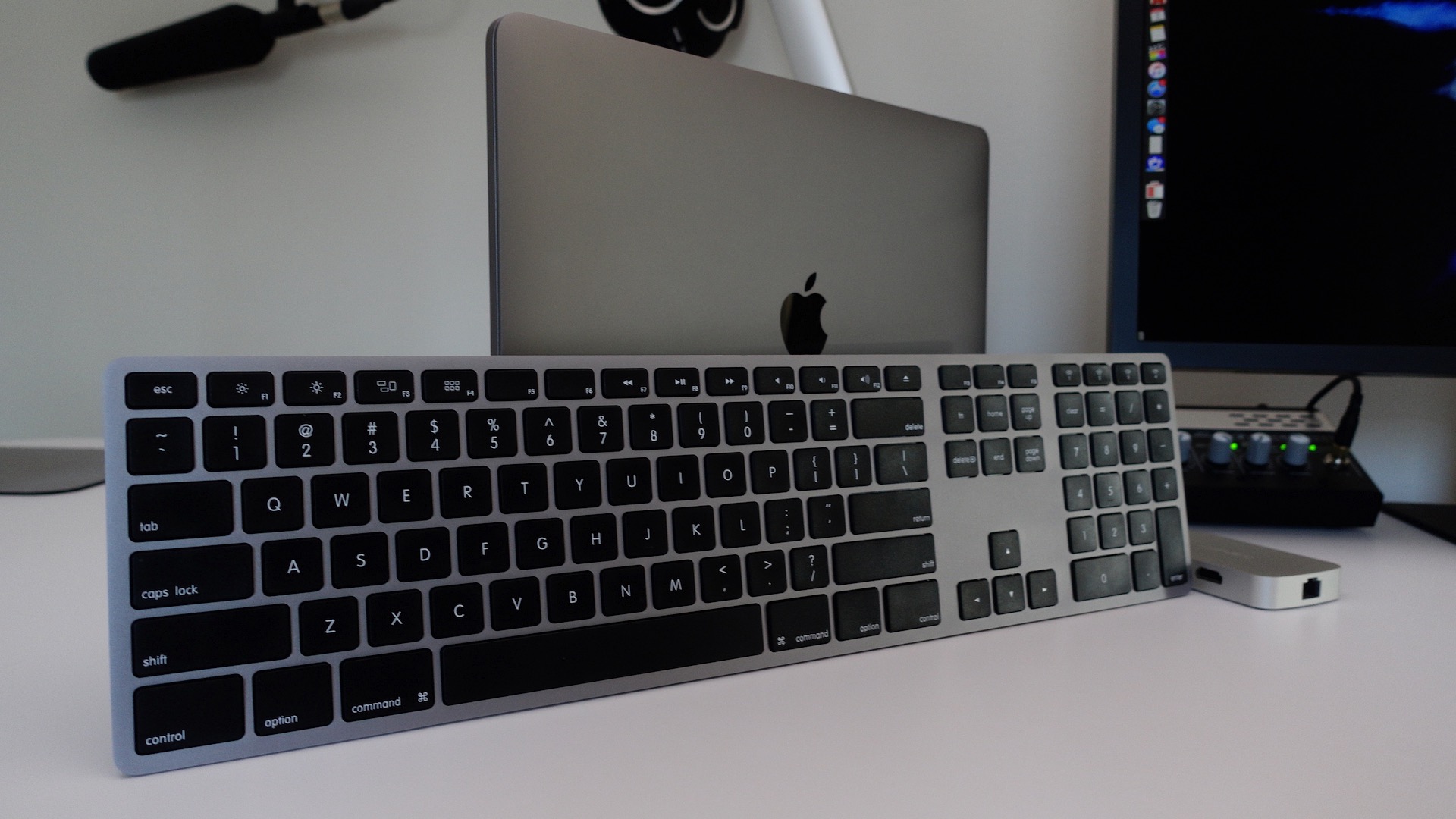 With Matias’ offering, you get the best of both worlds. You get a truly wireless keyboard with a long-lasting battery, and you get a number pad, extra function keys, large arrow keys, etc. You aren’t forced to sacrifice one thing for another.

Pair up to four devices

You’ll notice four curious-looking keys above the number pad on the right-side of the keyboard. These keys are dedicated to paired-devices, and you can pair up to four devices at once with the keyboard. 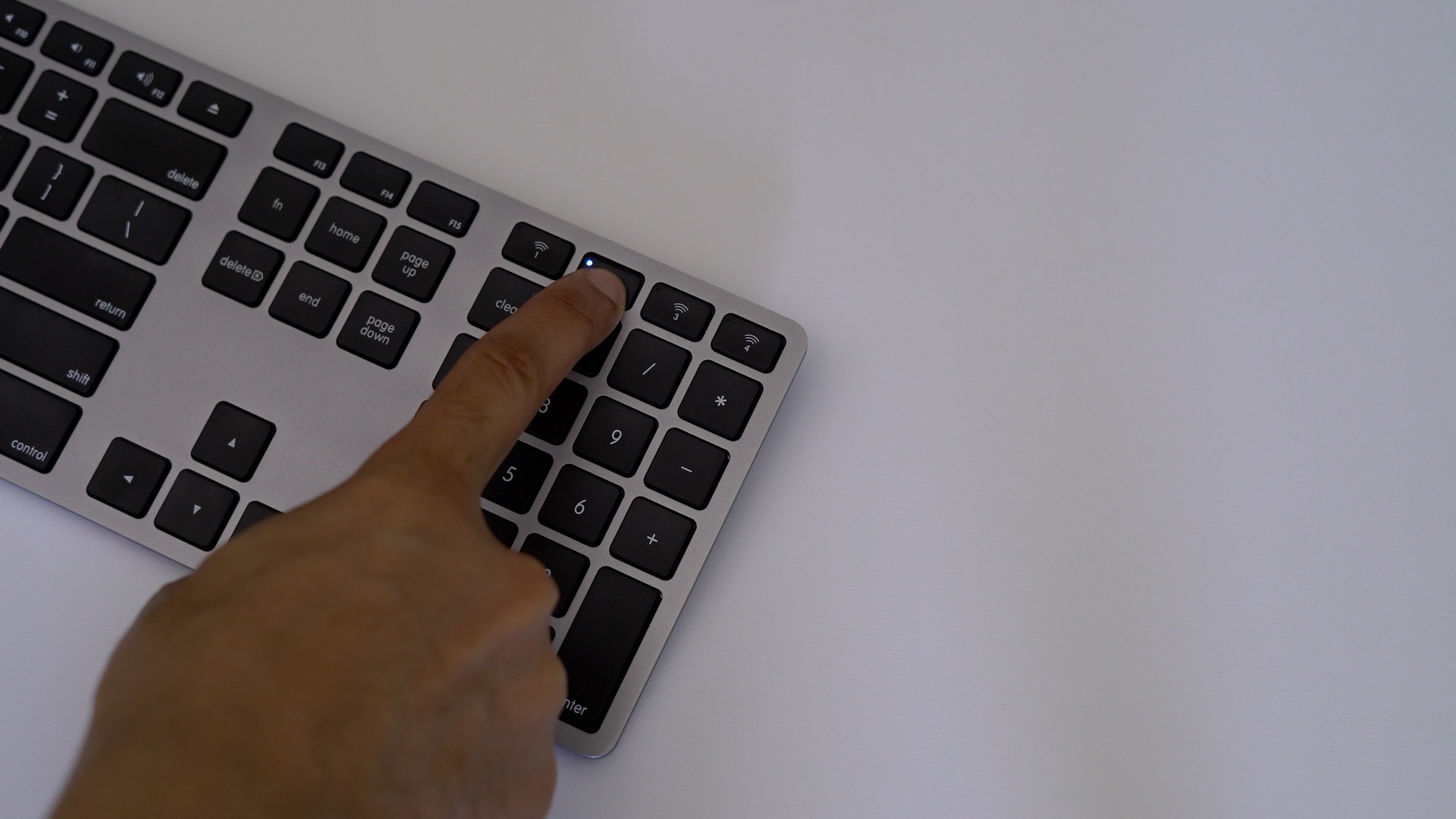 Thus, these dedicated keys make switching between an iPad and MacBook, for instance, a painless affair. You can literally press a single button to switch effortlessly between multiple devices, and it works just as advertised. Matias’ keyboard plays nice with macOS, iOS, Android, and Windows machines.

The Matias Wireless Aluminum Keyboard is probably the keyboard that Apple should be making. It’s a full-size keyboard with Bluetooth wireless connectivity, which is something that Apple doesn’t offer.

If you’re in the market for a good-looking wireless keyboard that features Mac-centric keyboard shortcuts, yet can be easily paired and switched between other devices, then give it a look.

You can find the Matias Wireless Keyboard for $95 from B&H Photo Video, but if you prefer to use Amazon, you can also find it there in all four colors.