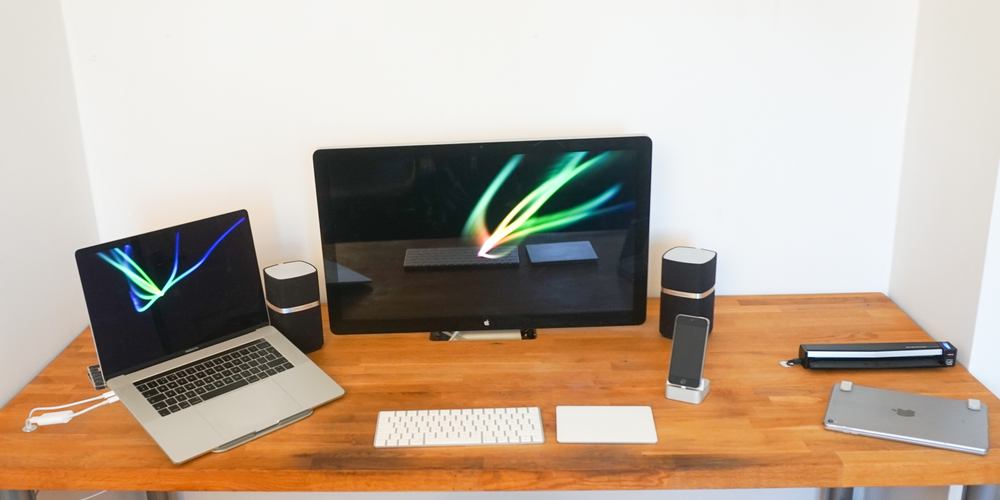 Time moves quickly in the tech world. Back in 2013, I thought it would be fun to share the Apple kit I use, and to invite you to do the same in the comments. Three-and-a-half years later, some of that kit looks almost comically dated – like the iPad 2.

So it’s time for an update, and this time I’m taking a slightly broader approach and talking about both Apple and non-Apple tech. So, as before, let’s begin with the things on my desk …

As regular readers will know, I last year finally bit the bullet and switched from my much-loved (and heavily upgraded) Late 2011 17-inch MacBook Pro to a shiny new 2016 15-inch MacBook Pro with Touch Bar. If you’d like to read about my purchase decision and experience with the machine, check out my MacBook Pro Diary series.

I’ve always gone for fully maxed-out Macs to maximize the useful life of the machine, but this time I had an additional reason: I was planning a move into more serious video editing. I’m shooting in 4K to allow room for crops during edits, and my new machine flies through 4K editing and background rendering without a stutter or beachball in sight.

On my desk, the machine sits on TwelveSouth ParcSlope stand (review), which helps with cooling and lifts the display more towards the centreline of my monitor. On the move, it travels in a Mujjo sleeve (review).

When I had my 17-inch MacBook Pro, it was sufficiently chunky that I felt the need for an 11-inch MacBook Air for mobile use. The 15-inch MacBook Pro is so portable that the MacBook Air is now redundant. I’ve hung onto it simply because a backup machine is always a good idea when you need a Mac to work.

I still have my 27-inch Apple Thunderbolt Display. I’m vaguely in the market for a 4K replacement, but so far nobody seems to offer what I’m looking for. As the comments in that piece show, I’m not alone in my view that Apple’s recommended monitor is not for me.

Finally, to complete my desk setup, I upgraded my wireless keyboard and trackpad to the Magic versions, mostly for the greater convenience of not having to swap batteries, though the slightly sleeker form factor didn’t hurt.

I’ve upgraded my iPad three times since that 2013 piece: first to the iPad Air, then the Air 2 and most recently the 9.7-inch iPad Pro. I tried the 12.9-inch model, but much as I loved the size of the screen, I found the size too impractical for some key iPad applications, like reading ebooks in bed.

My iPad is only really used as a pure tablet for ebook reading and Netflix viewing. The rest of the time, a Brydge keyboard (review) turns it into a mini-laptop.

With my iPhone, I’ve come almost full circle since my earlier piece. I always preferred the smaller form factor, and at the time had an iPhone 4S. I upgraded to the iPhone 6 and then 6s, but then swapped that out for the iPhone SE. With my iPad as my primary mobile data device, the more pocketable size of the SE suits me perfectly – and I greatly prefer the iPhone 4-like design.

I’m still using the same low-profile Fujitsu scanner to support my paperless life, but have upgraded my desktop speakers to the absolutely superb B&W MM-1s.

I also have a few things hidden out of sight at the back of my desk. Behind my MacBook Pro is a Blue Snowball microphone used for video voiceovers. This was recommended by my colleagues as a way to get decent-quality recordings without breaking the bank, at less than fifty bucks. I also added a pop filter.

Tucked away behind the monitor is the other piece of hardware used for video editing: the Contour ShuttleXpress (review), a hardware jog-dial which is a much more intuitive way of moving through videos than keyboard shortcuts, especially when you want to select a precise frame. This is supplemented by Editors Keys keyboard skin, just visible poking out from behind my Mac.

That completes the tour of my desk, so let’s look now at cameras.

Getting moving shots of review kit tends to require both additional hardware – like a camera slider – or a steady hand with a decent tripod and fluid head. While I’m practicing the ‘steady hand’ part, I wanted the option of animating footage in post-processing. This is easy with still photos, but doing it with video requires enough pixels to crop in.

This was the reason I upgraded from my much-loved Sony a6000 camera to the 4K-capable a6300 model. This wasn’t a cheap upgrade, but I figure it’s only a matter of time before 4K video becomes the expected standard, so I might as well bite the bullet now.

While I currently do voiceover narration during editing, I wanted to have the option of doing pieces to camera too. Built-in microphones are always weedy, so I got what seems to be the default external mic for vloggers everywhere: the Røde Videomic.

Completing my 4K camera line-up is a GoPro Hero 5 actioncam, and a DJI Mavic Pro drone (review). I probably won’t be using the latter for any 9to5Mac reviews, but you never know …

Where home hifi is concerned, I have an all-AirPlay setup. My main hifi system, in the living-room, is the elderly but still superb Bang & Olufsen Ouverture with Beolab 6000 speakers. This is the very epitome of the wisdom of ‘buying the right thing once.’ Now almost 20 years old, its CD and cassette(!) players may be redundant, but with the addition of an Airport Express, it serves as an AirPlay system that can play music from my Mac, iPad or iPhone.

In the bedroom, I have a Naim mu-so (review), an absolutely stunning all-in-one hifi system. Bathroom and kitchen have Logitech UE Air Speakers, a great way to get a multi-room AirPlay setup on a budget now that these are officially discontinued.

Although I didn’t get the iPhone 7, Apple’s view that we now live in a wireless headphone world did persuade me that it might be time for a long-time wired headphone guy to make the switch. The choice of which wireless headphones was simple: I did a straight swap from my wired B&W P5 to the B&W P5 Wireless (review).

My Tado heating system (review) isn’t yet HomeKit-enabled, but the company tells me it will be shortly. I’m not sure this will have much practical impact anyway – as a combination of schedules plus iPhone-based presence detection does everything needed of it – but it will at least complete the set.

One final piece of technology I upgraded might technically be considered a downgrade. I swapped out my app-controlled WiFi kettle (similar to this one) for what my partner refers to as a ‘magic tap’: an InSinkErator HC1100C. This is a unit that provides instant boiling water for tea! Technically, it provides water at 97C, which is the perfect temperature for black tea. There’s no WiFi and no app, so it’s arguably lower-tech, but provides tea on demand – so is definitely an upgrade where usability is concerned.

So, those are my key pieces of tech – what about yours? Please share your setups and favourite gadgets in the comments.

Photos: AirPlay one Jason Zigrino; rest are manufacturer stock shots or my own.