Drone Diary: A review of the DJI Mavic Pro, an ultra-portable prosumer drone 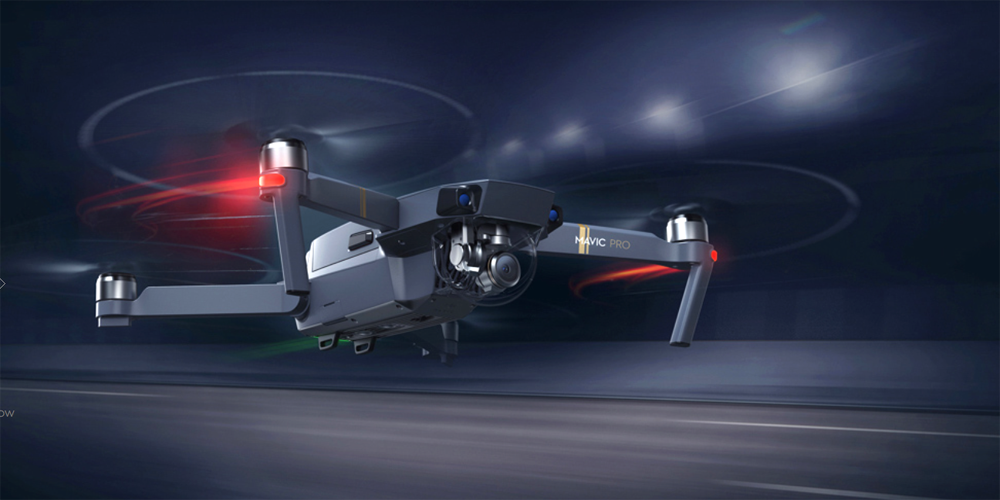 I’ve been keeping a watching brief on drones for some time. They had immediate and obvious gadget appeal. I mean, proper drones are both radio-controlled flying vehicles and high-end cameras – what’s not to love?

But decent ones are expensive, and I feared that they might be one of those things I’d find fun for a short time before the novelty wore off. I didn’t want to spend a four-figure sum on something that would soon be relegated to a cupboard.

Then a few family members got together to buy my father a DJI Phantom for his birthday, which gave me some hands-on experience. I was starting to get the itch, but still resisting. After all, what would I actually do with it?

Travel was the only situation I could think of where I might make use of one, but small ones were poor quality and high quality ones weren’t exactly compatible with my handbaggage-only approach to travel. Then along came the DJI Mavic Pro – a folding drone whose spec was virtually identical to the Phantom 4 but with a folded size so small it was almost pocketable …

The DJI Mavic Pro and GoPro Karma were announced almost simultaneously. I initially favored the Karma, as I already owned a GoPro Hero 5 camera – so could save money by buying one without – and it would get me a handheld gimbal into the package.

But the far better portability of the Mavic that really sold me. The Karma fits into a custom-made backpack, sure, but the Mavic fits into a shoulder bag small enough to count as a second carry-on bag on even the strictest of airlines. Since travel was my main exc– reason for buying one, the much more compact form-factor was a huge deal.

I tried very, very hard to resist buying one. I failed. 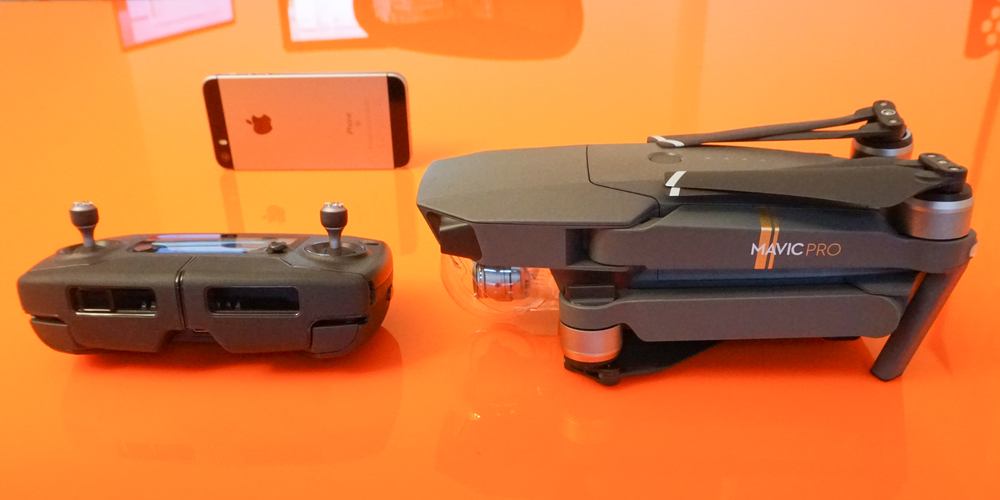 Let’s start with the portability. It is literally pocketable if you’re a cargo pants kind of guy. I’m not, but DJI sells a custom-made shoulder bag to hold the drone, controller and a couple of spare batteries. The bag is so small that there’s no way in the world anyone would imagine it could hold a drone.

Unfolding and folding takes literally seconds, as you’ll see in the video. Unlike most drones, the prop blades stay on, just folding away, so you can have the drone ready for flight in about 10-15 seconds. Allow another minute or two for the GPS to locate itself and to rotate the drone in your hands to calibrate the compass, and you’re in the air.

The portability is not quite at a level where you can carry it with you on a ‘just in case’ basis, but it’s close. Certainly I’ll carry it with me everywhere when travelling. I swapped out the supplied bag for a slightly larger camera bag – still within ‘second carry-on bag’ sizing – which allows me to carry the drone, controller, two spare batteries, my iPad, an adapter that I’ll talk about later, and my Sony a6300 still/video camera. That’s everything I might possibly need for photography and video in one compact bag.

But just because it’s small doesn’t mean it’s not capable. As I mentioned earlier, the Mavic Pro is almost identical in spec to the Phantom 4, a much larger drone aimed at the prosumer market.

If you’re sufficiently brave (and it’s legal in your country), the operating range is a staggering 4.3 miles. And it’ll get there quickly, with its maximum speed of 40mph.

Claimed battery-life is 27 minutes when flying at 15mph in no wind, which I found equated to over 20 minutes in real-life use. With the two spare batteries I got with the Deluxe Bundle, that’s a full hour of flight time between charges.

Despite its sophistication, the Mavic Pro is really easy to fly thanks to both a simple UI and a great deal of on-board AI. Bring both control sticks down and in to confirm you’re ready to fly, then push the left stick forward and it will take-off. If this is too much trouble, just press the auto-takeoff button on your iPhone screen. In the air, you simply use the joysticks to go up & down, forward & back and rotate left & right. You can even fly sideways and backwards if you like.

The drone intelligently brakes when you centre the joysticks. Normally, if you were flying forwards at speed, and just stopped applying forward power, it would gradually drift to a halt. But the Mavic automatically applies reverse-thrust for exactly the time needed to bring it to an almost instant stop.

To give you an idea just how easy it is to fly, I’d flown the Phantom 3 for about 20 minutes before I got my Mavic. On its very first flight, I flew it inside a tower with a radius of about ten feet, and then flew it through a narrow gap in a large hunk of stone (something you’ll see on the video below): that’s how confident I was in it. Granted, that first flight was shaky, but I performed these manoeuvres without any qualms.

Four flights later, I was much smoother, and already feeling confident enough to fly it through the centre of a bridge some distance away.

I half-joked when I got it that there’s likely a U-shaped curve of likelihood to crash it. High at first, when it’s new and unfamiliar, falling as you get the hang of it, then rising again as you get over-confident. I came uncomfortably close to demonstrating this when I repeatedly ignored the low battery warning and let it get a little far away from me before having to return into a stiff headwind. In the event, I had to set it down some distance away and then go running after it.

But that was entirely my fault. The instructions tell you clearly to always set a safe ‘return to home’ altitude – higher than any surrounding obstacles. Then the safety features kick in.

The drone has a number of intelligent features designed to protect owners from their own incompetence.

For example, there is collision-avoidance, where the drone will come to a halt if you try to fly it into an object – though it should be noted that this only works when flying forwards. Sensors also tell it when it’s close to the ground, when it automatically slows its descent.

It memorises the take-off position, and if you ignore the battery-low warning, it will wait until there’s only just enough power, then automatically return to the start point and land (if you allow it to do so …).

The app also has a constantly-updated database of airspace restrictions. If you try to fly too close to an airport, it won’t allow you to take off. If you’re allowed to fly at low altitude but have controlled airspace above you, it will only go as high as the law allows it to.

Use with an iPad

One compromise the Mavic makes for portability is that the controller screen only displays data. You need a smartphone to display the live video feed, and there’s only enough room for a phone or – at a push – an iPad mini. (The mini isn’t officially supported, and you have to kind of jam the corners into the holder in a fashion that looks insecure but reportedly holds it quite well.)

In my case, I had the smallest possible screen, as I have the iPhone SE. Although I found it usable, it’s less than ideal – and I greatly prefer the view from a full-size iPad. Fortunately we live in the age of 3D printing, which has spawned an entire cottage industry of after-market parts, so I bought the aero3D. This is a bracket with a mounting point for an official DJI iPad holder designed for its larger drones (you have to order the holder itself direct from DJI).

Those with an iPhone 6/6S/7 Plus will probably be more than happy with that screen.

One point worth noting: the DJI documentation tells you that you need to use the microUSB port in the side of the controller to connect to your smartphone or tablet, as the main USB-A port is only for updating the firmware. This would be a problem for an iPad, as the supplied microUSB-to-Lightning cable is too short to reach an iPad, and longer cables don’t appear to exist.

Fortunately, DJI is mistaken: the main port works fine, which makes it easy to use any Apple or third-party Lightning cable.

As mentioned, flying the Mavic is easy. You simply open the DJI Go app, switch on both drone and controller, wait for everything to see each other and off you go.

I mostly fly the Mavic from the live video feed, but do note that some countries – the UK included – require you to keep the drone within your sight at all times, so I haven’t personally got the option of putting that 4-mile range to the test.

I have, though, flown it until it’s just a dot in the sky, and both control and video feed were rock stable. I’ll talk more about the flying experience in the video.

The DJI Go app includes some intelligent flight modes, which I’ll talk about in a future diary entry, but the company has also opened up the platform to third-party developers. Next time around, I’ll be putting one of these – Litchi – to the test.

The video has a short intro showing the size and setup, then gets quickly into the fun bit: the flying. One step I realise I forgot to show was removing the camera cover and gimbal protector – this also takes seconds, though refitting the latter after a flight is a bit more fiddly.

So, er, yeah: price. The DJI Mavic Pro isn’t a cheap toy – but then that’s because it’s not really a toy. DJI positions the model rather eccentrically, describing it as a consumer model but sticking ‘Pro’ in the name. The reality is that plenty of videographers use the Mavic for serious work. Both camera and flight capabilities are good enough for anything short of a full-on cinema-standard movie.

The DJI Mavic Pro costs $999, which gets you everything you need to fly bar an iPhone: the drone itself, the controller and charger. The Deluxe Bundle costs $1299 and adds two extra batteries, two spare propellers, a 4-battery charging hub, a car charger and a shoulder bag. This offers a small saving over the all-in cost of the individual items if you want everything in the pack.

The cost was the main reason I hesitated for so long before buying a drone at all, and took more time to consider this one. But in the end I took the view that I’ve paid more for cameras in the past, and this is a flying camera. For travelling in particular, it lets you get some unique views you couldn’t get any other way.

The portability of the Mavic means that I’ll carry it and use it in situations where I simply wouldn’t use a larger drone, and if you compare to the company’s other models, you’re really not paying much of a premium for the compact size. Within its price bracket, the Mavic is – to me – the best drone on the market.