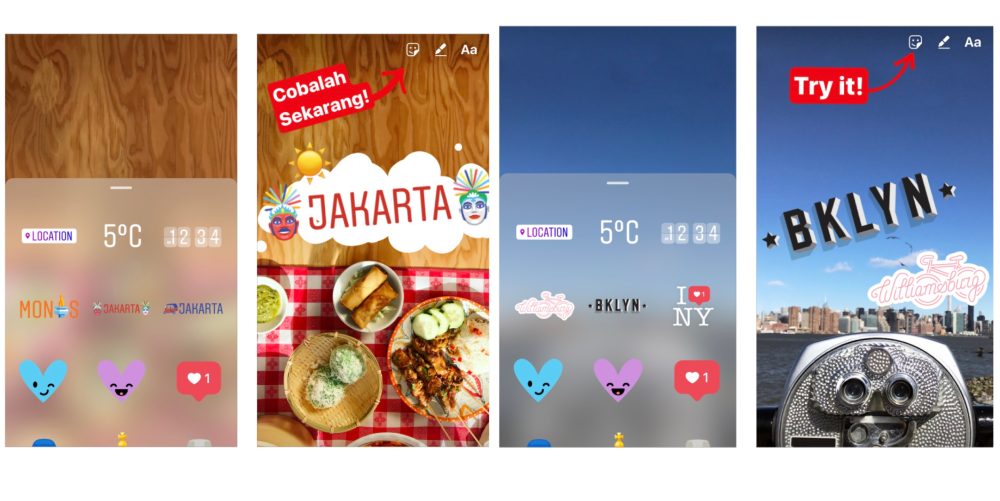 As it continues to play catch up to Snapchat, Instagram today updated its Stories feature with support for geostickers, a capability that Snapchat has supported for a while now and is arguably one of its most unique features.

At this point, Instagram’s geofilters aren’t nearly as widespread as Snapchat’s, but presumably that will change as time progresses…

Instagram announced its new geostickers in a blog post and explained that the feature is launching first in New York City and Jakarta. The company explains the feature as an evolution of the stickers capability it introduced back in December.

The process of adding a geosticker to your Instagram Story is pretty straightforward, especially if you’ve ever used Snapchat before. After you take a photo or video, just look for the sticker icon in the upper-right corner.

Additionally, someone viewing your Instagram Story can tap a geosticker to see the location page for that specific city.

When you take a photo or video and tap the sticker icon, you’ll see geostickers at the top. No matter where you are in New York City or Jakarta, you’ll see a custom sticker for that city. You may see other stickers appear when you’re visiting select neighborhoods and landmarks — each one is designed to match the vibe of the location it represents.

You can add as many stickers as you want, adjust their size and placement and mix and match with other creative tools. Just like the customizable location sticker, people watching your story can tap a geosticker to see the location page. Your story won’t show up on the location page itself.

Instagram first introduced its ephemeral sharing Stories feature back in August and it quickly drew comparisons to Snapchat’s Stories feature. Since then, Instagram has been playing catch to Snapchat, gradually adding new features and capabilities.

Instagram hasn’t hinted as to what cities are next on the docket for geostickers, but presumably there are more planned. The new geostickers come as part of Instagram version 10.11 on the App Store and Play Store for Android.