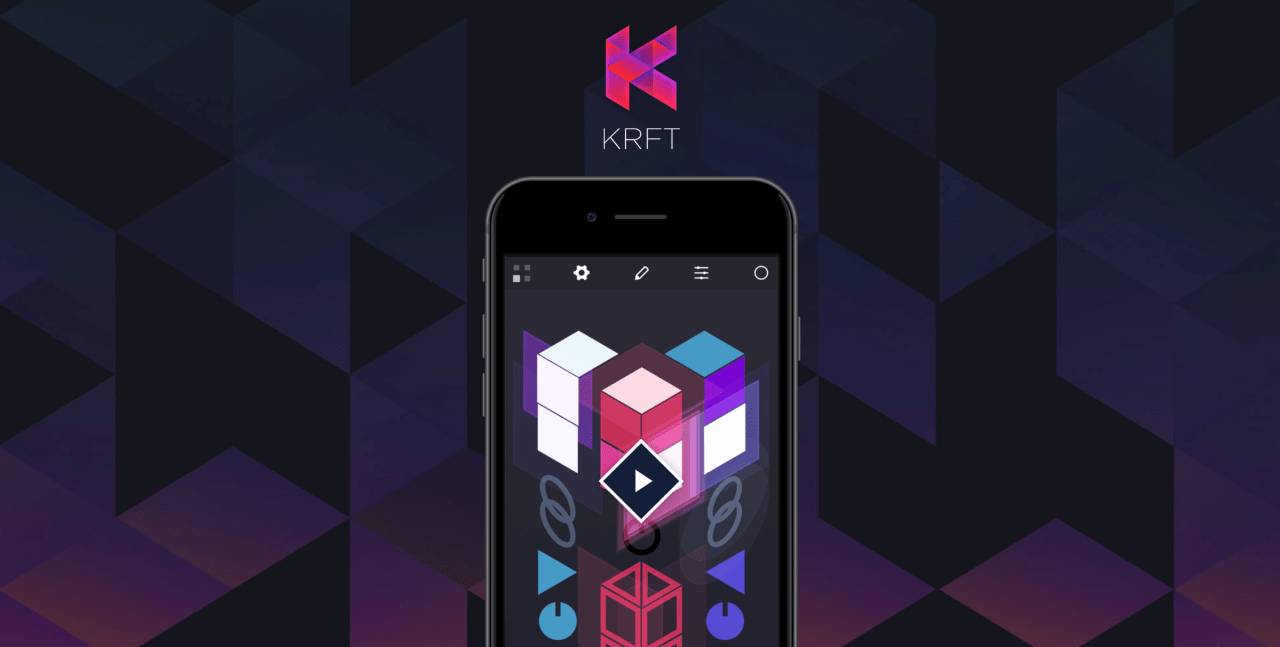 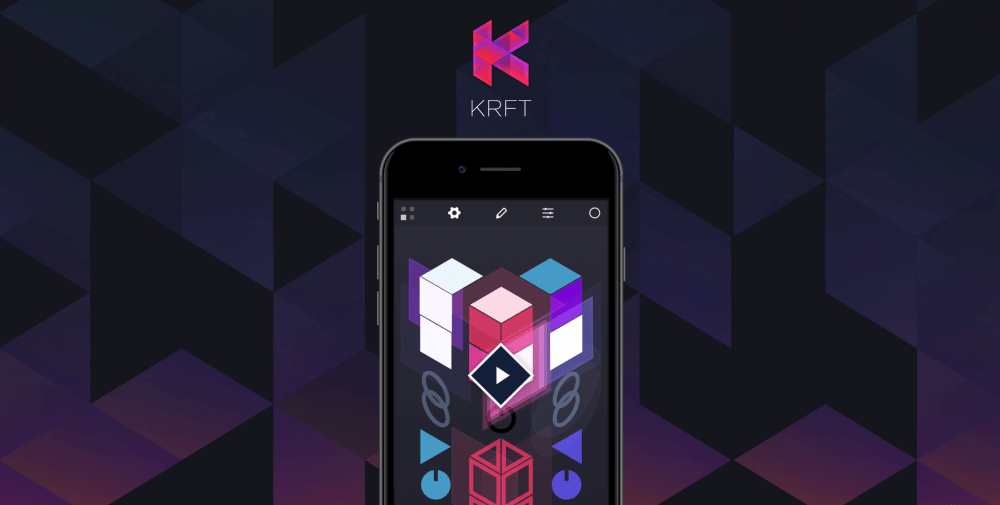 KRFT for iOS takes a unique approach to music production and performance allowing producers to not only create the musical notes, melodies and chords in a particular song or set, but also the Surface with which it will be performed on.

Using a simple system of touch-controlled geometric shapes, users can arrange a series of hand-crafted loops, drum beats, modifier Dials, Morph buttons and more into a custom-made performance control surface. Due to the almost modular nature with which the app treats the various elements of your song, KRFT’s performance Surface becomes a new and interesting way for coming up with entire song arrangements as you morph riffs and beats with the app’s built-in effects. Here’s how it works:

Geometric squares represent each loop or part in your song. They are color coded by instrument: red is drums, blue is lead sounds, purple is bass and so on for each new instrument you add to the project. Think of these squares as loop containers that can be turned on and off (or played/stopped) with the touch of your finger. Within the Edit page for each of them, you can use a traditional Piano Roll style editor to create your riffs and beats, record your ideas in real-time, and even apply loads of effects and instrument parameter changes to custom tailor the sound.

A highly optimized and high quality custom sound engine is at the core of KRFT. Choose from 50 Bass presets, 50 Lead presets, 14 Drum Kits & over 50 Sound Effects to make your creations. Go deeper and tweak filters, effects and more to make the sound your own.

Once you’re done creating a part on a square(s), each one can then be arranged or flipped on a 3D axis, allowing you to arrange them on the main Surface page to create a custom controller for your performance. In other words, the awesome geometric towers you see below): There is more to it than an interesting aesthetic style though. The proximity of each loop to one another on your Surface design will determine the ease with which you can perform the parts, create interesting changes and more. You can select multiple elements of your surface with a strategic click and hold (with full multi-touch), and then release them just at the right time to create an interesting transition, for example.

Outside of the basic Loop squares, you also get a Sample player represented by grey circles, Dials for applying temporary parameter changes/effects to particular instruments or the master mix, and a Morph function presented by triangles (which look a bit too much like play buttons). The Morph controls can be very powerful. You can choose to apply variations to the sound of a particular set of squares. For example, applying an interesting reverse-like effect with some wacky envelope settings on your Lead sounds can be a cool way to get a completely different sound out of the Lead loops on a particular Surface. Great for live performance.

Beyond that, you also get the Group element, which allows you to play/stop custom selections of Loop squares with a single click (very handy!). And those Fill squares (the outlined shapes seen below) allow us to create temporary fills or alterations in the basic pattern in a song. This is really great for glitchy drum patterns on the fly or massive melody machines you can just swipe your fingers across to make interesting lead lines and ambiences.

While the interface may seem gimmicky at first glance, I haven’t been able to put this thing down for days

What you can’t do with KRFT is load up your own audio or record through the mic on an iOS device directly to the Sample elements! It think it would add a ton of personalization to the music created in KRFT, and would just be plain fun. You can clone loops of a particular color or instrument type (very handy), but I would also like to see the ability to quickly copy MIDI/note data from one instrument to another.

It would have been nice to be able to share my entire Surface with colleagues, collaborators and the 9to5Mac gear heads. While the ability to quickly record and then share a performance you have just done on your custom Surface is very possible and quite well implemented, sharing the entire Surface itself would be awesome.

While the interface may have seemed quite gimmicky to me at first glance, I haven’t been able to put this thing down for days. The synth engines might not be the most robust option out there, but the playability that comes along with the Surface mechanics is undeniable. When using the app as a complete song-in-a-box setup – with drums, bass and melodies – it feels a little bit like a hobby or a fun musical diversion. But when using the entire interface to create a single patch or sound, things can get pretty serious. I am certainly creating morphing melodies and atypical motifs I don’t normally land on in a typical DAW set-up. That’s worth the price of admission for me on its own.

Fortunately, the two-man team behind KRFT looks to be supporting the app quite well with new features already being added. They have nailed the idea of a personalized and highly playable UI so well here, it has my mind swirling with possibilities for future updates.

KRFT for iOS sells for $4.99 on the App Store along side Studio Amplify’s other interesting music production apps: Junglator and NOIZ. Both of which are currently available for free for a limited time.