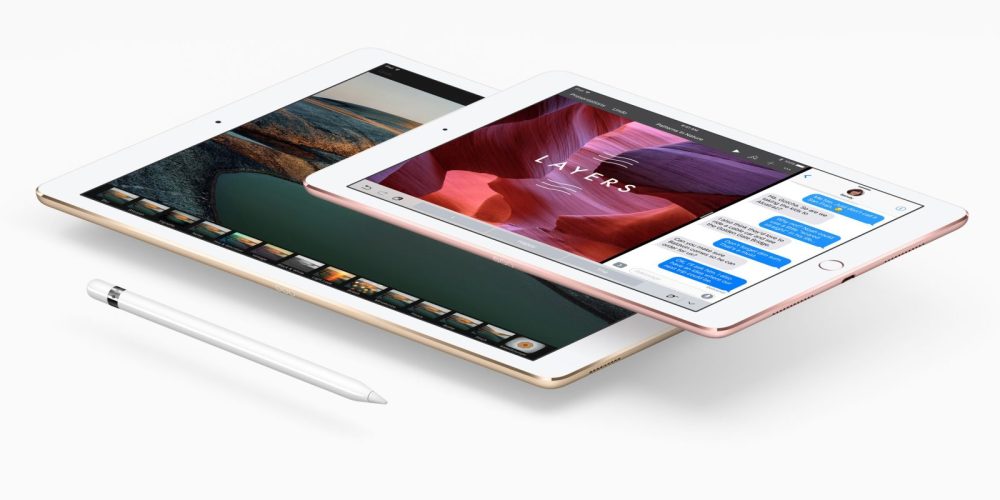 Following leaks about as-yet-unannounced iPad device identifiers, Digitimes is today reporting that Apple has moved up production plans for a new 10.5 inch iPad to this month, and will unveil the new iPad at a product event in ‘early April’.

The 10.5 inch iPad is expected to have an edge-to-edge display, a new virtual Home Button and other upgrades. Digitimes says updates to the 9.7 inch iPad and 12.9 inch iPad Pro are also in the pipeline …

The supply chain analyst had previously predicted that the 10.5 inch iPad will not be ready for launch until May/June, but this latest report says that Apple has pushed the production schedule forward.

The 10.5 inch iPad is expected to be almost the same physical size as the current 9.7 inch iPad Pro, but will gain an extra 0.8 inches in diagonal screen space by losing the left and right bezels, as the product has been described as having an edge-to-edge display. The bezel-less iPad would somewhat presage one of the big rumors for the new iPhone 8 in the fall, which is also expected to feature a bezel-less design.

The report says an upgraded 9.7 inch iPad and refreshed 12.9 inch iPad Pro are also imminent. As the new 9.7 inch tablet is likely meant as a cheaper offering in the lineup, Digitimes says Apple will pitch the 10.5 inch and 12.9 inch iPad as the mid-tier to high-end competitors in the tablet market.

Apple is only expected to make about 1 million 10.5 inch iPads per month, whilst the upgraded 9.7 inch model will see more a healthy ~3 million/month run rate.

Digitimes is a supply chain centric site. Their claims about Apple hosting a product event to announce the new iPads in early April ‘to mark the inauguration of Apple’s new headquarters in California’ should be taken with heavy skepticism. Apple’s plans about an event can change on a whim and are not connected to the supply chain at all.

However, it is reasonable to expect the new 10.5 inch iPad sooner rather than later off the back of this report. Digitimes says mass production of the 12.9 inch iPad may not start until May or June, but this does not preclude Apple announcing it alongside the 10.5 inch iPad in April. It makes sense for the ‘budget’ 9.7 inch model to also launch at the same time.