Elektron is well known for its innovative hardware instruments like Octatrack, Analog Rtym/Keys and more. But today we are looking at the new Analog Heat Stereo Processing unit. The company has brought much of its forward-thinking sensibilities to an otherwise non-remarkable product category here: outboard analog effects. These and similar effects units are commonly used for adding subtle warmth to vocal tracks or entire mixes, to viscous levels of distortion and more. It’s equipped with 8 distortion circuits, a filter, and what can only be described as a sort of magical integration with Logic Pro X and other major DAWs. It uses the company’s phenomenal Overbridge technology to work the same way a typical virtual plug-in does.

Much like the rest of Elektron’s gear, this thing is quite well made. All of the pots and switches feel durable and there is nothing flimsy about them. Along the back we have the power, stereo analog inputs/outputs, USB (audio and MIDI) and a pair Control inputs for control voltages, expression pedals and more. Elektron has received some criticism in the past for the way it designs the user interface and the way we access certain functions on its devices, but I really didn’t have any issues with this product. The display might not be the most high-res or flashy option out there, but it was more than serviceable.

The 8-analog distortion circuits, which include Drive and Wet/Dry controls, are followed by the analog multimode filter, and a 2-band EQ. We also have some nice digital elements like an LFO and an envelope with a sweet little transient follower function. The analog EQ bands are at fixed frequency points (High and Low). While it would have been nice to be able to adjust these manually, Elektron has actually customized the frequency and curve of the EQ for each of the 8 circuit options. In other words, the EQ reacts differently depending on which of the distortion modes you are using. It is a fairly basic set-up, but things can go quite deep when you get into the modulation options. I had loads of fun (and success) with the envelope follower. You can use this feature to create a sort of pumping-compression sound on groups of instruments or drum kits (anything really). You can easily get the transients in a particular recording or part to duck the filter cut-off, for example, which I found great for pounding bass/kik lines:

Analog Heat is also a fully functioning sound card or 2-track audio interface for your computer. It is not very often we see hardware manufacturers enable this functionality as audio is normally left to analog inputs/outputs and USB connections are typically for power/MIDI/data. Analog Heat can do both. And man does it benefit from doing so: 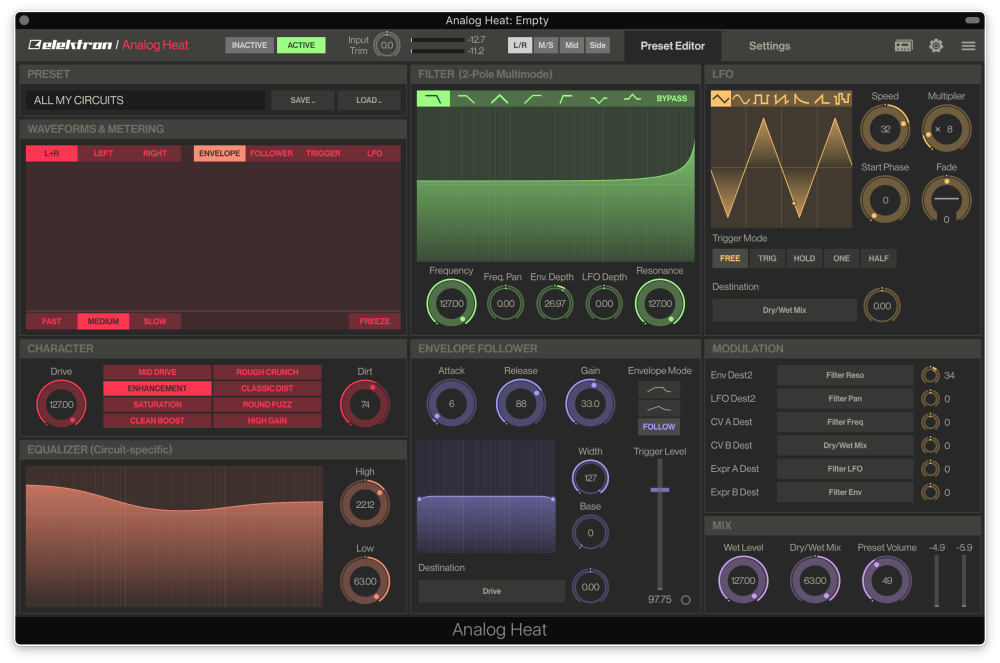 Overbridge is a technology that allows Elektron’s hardware devices to communicate to your Mac and DAW over USB. Of course, Analog Heat has standard audio I/O and can be used in a traditional fashion that way as well.

We can have a single instance of Analog Heat represented in the effects slots inside of our DAW. Overbridge basically round trips the audio from a track down the USB cable and right back into the correct place in the signal chain on your channel strip without you being none the wiser. Sick. In other words, we can load up Analog Heat just like any other virtual plug-in we have on our system, tweak the hardware or the plug-in interface to taste and we’re ready to go. If you want to hear what this kick drum track would sound like if you EQ’d and compressed it before processing it with Analog Heat, just move the Analog Heat plug-in down in the chain like any other plug. Now, of course, we can only have a single instance of Analog Heat running in a given project (unless you have a small army of Heats in your bedroom).

From within the plug-in (only it appears) we can choose to process the audio over USB using a Mid/Side pattern as well, which is a particularly nice touch and adds some extra depth to the box.

The inclusion of the Analog Heat plug-in is also a perfect visual-aid for what is happening inside the unit. We can clearly see what the EQ curves look like, precisely how the envelope follower is detecting the incoming audio, the amount of modulation on a certain parameter and more. Beginner or seasoned vet, this is good stuff.

Here’s a basic drum machine-style drum loop running through some of the various presets and different circuits to give you an idea of what this can do. The first couple bars is the dry, un-processed drum loop, followed by a series of different variations using Analog Heat there after:

Oh, and there is an awesome interactive demo available on Elektron’s site where you can actually hear the effect on several instruments through all of the circuits etc. 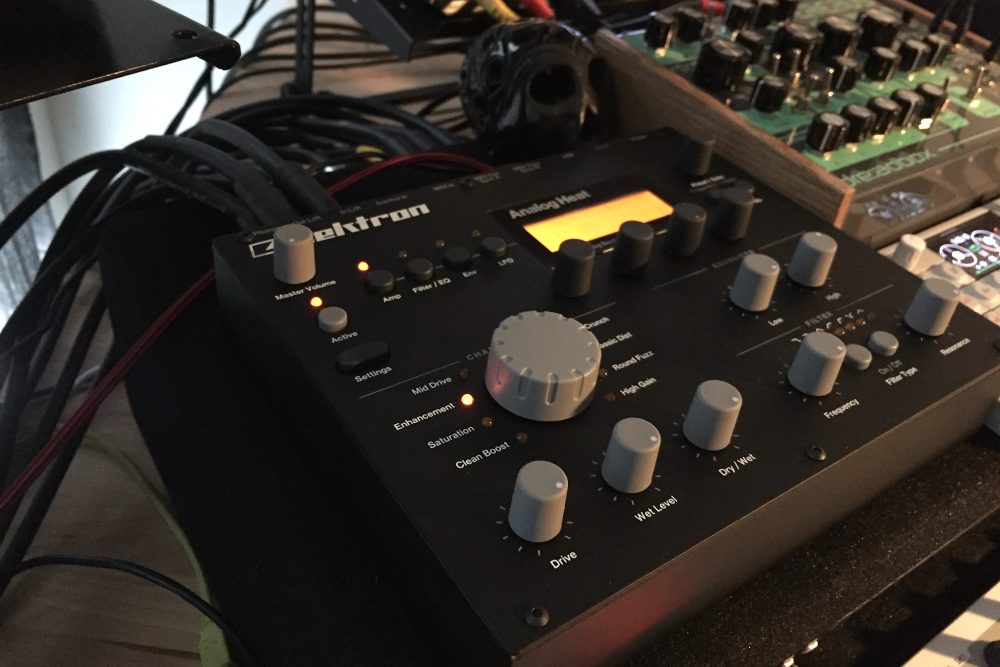 Anyone familiar with analog gear or Elektron in general may have already guessed it, but this thing isn’t cheap. It is going to run you $749 to have one of these suckers in your set-up. When they first unveiled it, I thought maybe the price was a little steep, but after using the machine with the completely free Overbridge in Logic Pro X and in live synth performance set-ups, I’m more convinced.

one of the best and most versatile analog preamp/distortion units for producers and performers on the market…
It’s hard to argue with the value Elektron has added in on top of the inherent cost of the analog components the box houses. The distortion circuits sound great for everything from subtle warmth and presence, to nasty overdrive and pumping compression effects. Particularly the envelope follower, but the modulation options here are very nice to work with as well.

If I had to fault the little fuzz box for anything it might be the somewhat old school-looking display. After seeing products like the OP-1 from Teenage Engineering and Elektron’s upcoming new drum computer Digitakt, it just would be nice to see a slick OLED on there. Another thing, and this is personal, I might have preferred more of the distortion circuits to be less drastic/harsh. Five of the eight are fairly intense, but I will say that it always depends on the source and settings. I did find the more savage settings useful on individual instruments and drum hits, more so than kits or sub groups.

If you value the sound of analog gear with the flexibility Overbridge provides, Analog Heat is certainly worth a close look. I’d say it might be one of the best and most versatile analog pre-amp/distortion/boutique compression solutions for producers and live performers on the market.

See any interesting products/gear you would like us to review/cover? Let us know in the comments below.