Twitter rolling out advanced word & phrase muting on iOS, here’s how to use it 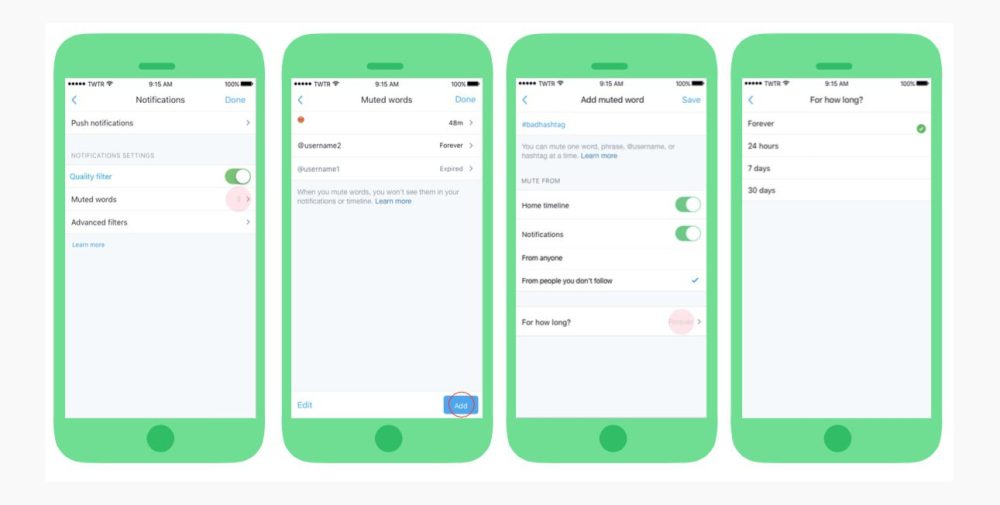 Over the last week, Twitter has started rolling out more advanced filtering features allowing users to block words, phrases, hashtags, and more. The company announced today that the new features are now available on iOS. Read on for more details and how to take advantage…

The new update allows users to mute words, phrases, and hashtags for a set period of time or forever. The update comes as Twitter works to make the social network “safer and better” for users amid growing concerns about harassment and spam.

In order to take advantage of the new filtering features, follow the steps below:

There are a variety of settings available to further customize the muted word. You can choose whether to mute the word from appearing in notifications, from appearing in the Home timeline, or both. You can also choose whether to mute the word from anyone or from people you don’t follow. You can also choose for how long you want you want to mute a word, ranging from 24 hours to forever.

Twitter had previously announced these new features earlier this much as part of its efforts to make the social network safer. Twitter has been facing increasing criticism for not doing enough to combat harassment, but the company has promised to do more.

Twitter originally started rolling these new features out on the web and to Android devices last week, but today marks the release to iOS. It’s important to note, however, that this is a server-side update and appears to be gradually rolling out to accounts. For instance, I have the new muting features on one of my accounts but not the another.

To ensure you get the new features as soon as possible, you can download the latest version of Twitter for iOS from the App Store.

You can mute words, phrases, and hashtags for a set time period in your timeline and notifications.