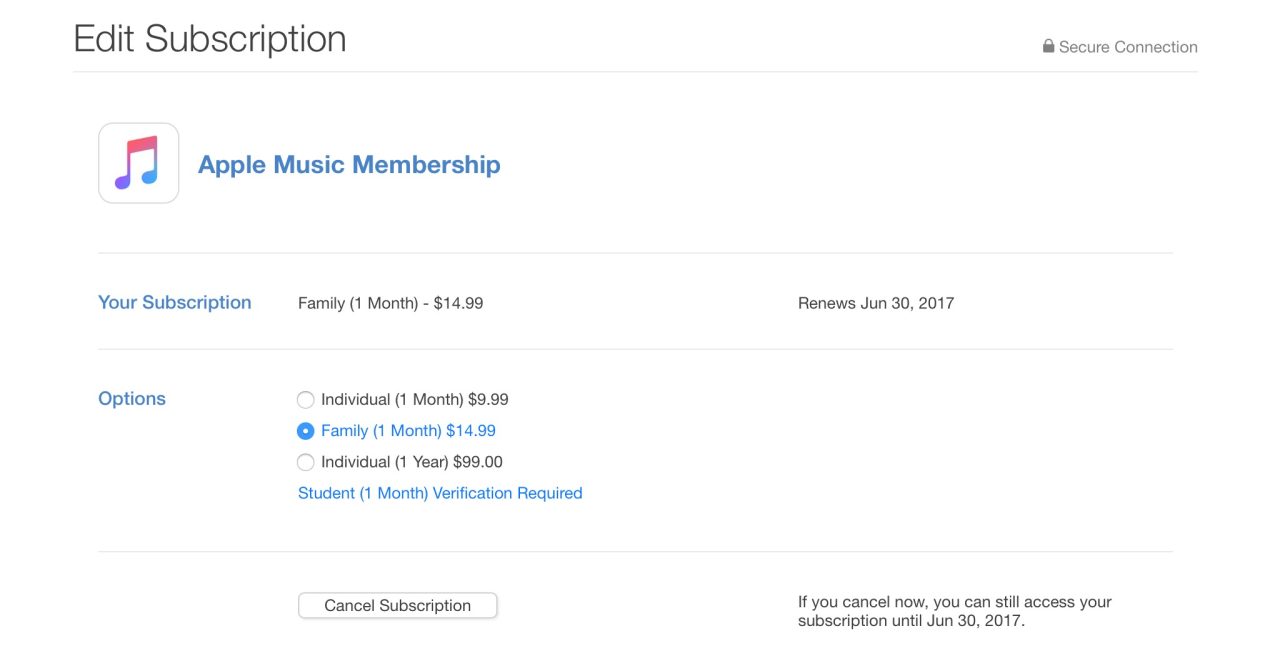 As noted by TechCrunch, the new option is a bit buried and not exactly prominently advertised by Apple. For instance, if you currently don’t subscribe to Apple Music and head into the Music app to subscribe, you’ll see the normal individual, family, and college student monthly rates. So, if you don’t already have an Apple Music membership, you’ll have to subscribe to one of those tiers first before switching to the yearly plan.

Once you’re subscribed to a monthly family, individual, or student plan, you can head into the App Store and start the process of switching to the yearly plan. In the App Store (on iOS 10), scroll to the bottom of the featured tab and tap the “View Apple ID” option. From there, tap the Subscriptions option and choose Apple Music. Then, you should see the individual 1-year membership for $99. Simply tap that option to switch your account.

It’s a pretty good deal if you’re happy with Apple Music and know you’ll be with it for at least another year. Normally, an individual subscription would cost $120 per year, so you’re saving a little under 20 percent by going for the full-year option, which is well worth it.

Previously, Apple Music gift cards could be purchased that offered a year membership for $99, but you had to go out and buy a physical gift card to be eligible. Now, you can simply make the switch right from your iOS device. At this point, the yearly subscription option doesn’t offer student or family plan users a discount, though, with Apple seemingly focusing on individual subscribers with this change.

As always, Apple Music prices and availability vary by country, but we’ve confirmed that the new yearly option is available in at least the United States, Canada and the UK, and commenters have reported it available in a number of other countries.

Will you make the switch to a yearly Apple Music subscription to save a few bucks? Let us know down in the comments.