TechInsights has analyzed the chip and confirmed that the SoC is fabricated using a 10 nanometer process, whereas the A10 and A9X use 16mm processes. This results in a high-performance chip that is also the smallest iPad SoC die size to date …

It is interesting that Apple has adopted 10nm in this generation, as the iPhone chips usually lead the way with new fab processes.

The A11 is expected to debut on a 10nm process in September for the next-generation iPhone, so it is surprising to see Apple break the pattern and push out the iPad chip first at 10nm.

The shrink has resulted in Apple’s smallest ever die size for its tablet SoCs; the A10X measures at 96.4mm squared. AnandTech graphs the dramatic change: 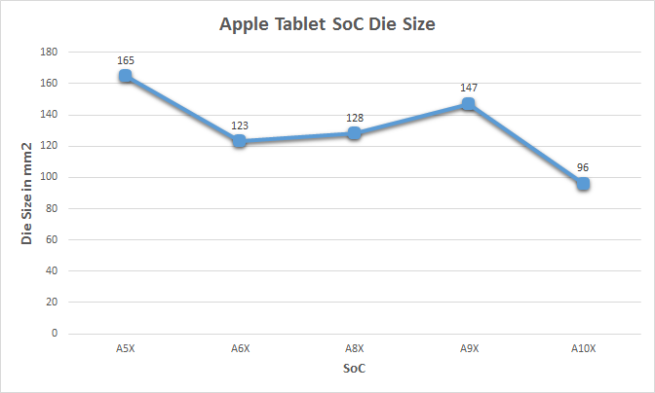 Adopting new smaller process nodes is risky as production problems cause yield issues which result in higher costs. Of course, Apple is in a unique financial position to absorb costs and take on more risky projects. Despite the aggressive update of 10nm though, it seems the A10X is a relatively conservative chip otherwise.

As shown by the floorpan photos, the design of the A10X is very similar to the A9X. Apple has upped CPU cores from 2 to 3 and increased L2 Cache to 8MB, but it does not seem there are any major structural differences between the two generations. Apple has taken full advantage of the 10nm process by reducing the die size, which should reduce overall power consumption.

It also seems that the A10X is using similar GPU cores to that of the A9X and A10. This means that Apple has not yet dropped its reliance on Imagination Technologies, which Apple has already announced it would do within the next eighteen months. It will be very interesting to see if that happens with the A11 and the iPhone 8; if not, it is almost certainly happening with the next Apple chip revisions in 2018.