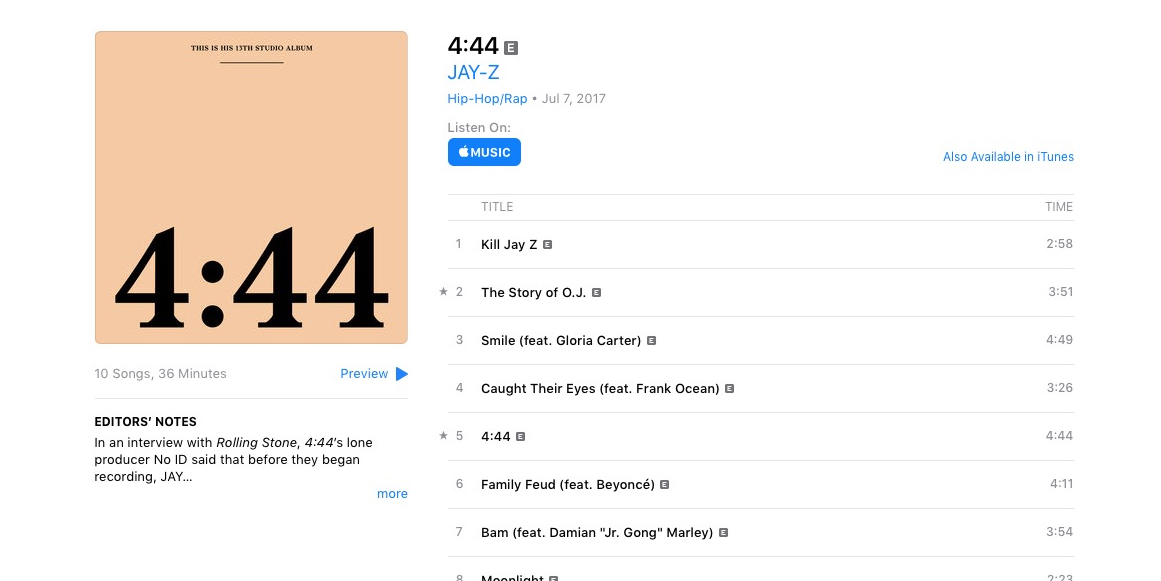 Tidal owner Jay-Z released his hotly-anticipated new album ‘4:44’ a week ago on his streaming music service. The album launch was a hit, going platinum in five days, but it wasn’t as big a win for Tidal as it first seemed as the exclusivity window only lasted a week.

The album is available now on Apple Music, iTunes, and Amazon Music Unlimited although Spotify is notably left out. Tidal continues to struggle in the streaming music market as it tries to compete with bigger players, and it now seems that Kanye West has walked away from his exclusivity deal …

Yesterday, Apple Music premiered the first music video from the album’s songs despite not offering the actual music.

That inconsistency has now been resolved. Before the wider release today, 4:44 was only available to Tidal users worldwide and a Sprint exclusive for new Tidal customers in the United States. A physical CD version of the album will also follow soon, with exclusive content not available on the digital releases.

The fate of the Tidal music service remains murky as the service struggles to attract the millions of users that its rivals, like Spotify and Apple Music, tout. Tidal has traded on its exclusive deals with artists but it seems that one of those is also about to collapse.

Billboard reports that Kanye West has terminated the Tidal exclusivity rights to his music. West claims that Tidal owes him more than $3 million after the success of The Life of Pablo on the music service. There is also dispute about payment for West’s music videos.

Spotify boasts 50 million paid subscribers to its service and Apple last announced 27 million subscribers to its $9.99 Apple Music offering. In contrast, Tidal is thought to have under 2 million members. Sprint took a 33% investment in Tidal earlier this year to keep the service above water.