As it continues to expand its own ecosystem, Amazon may have a new messaging app on the horizon. According to a new report from AFTVnews, Amazon is working a messaging app called Anytime that carries a strong focus on group communication.

The report cites customer survey information and explains that Anytime will have standard messaging features such as encryption, video support, audio support, and stickers. Amazon says users will be able “encrypt important messages” at a higher level of security, while voice call and audio call will also presumably be private and secure.

How Amazon plans to differentiate, however, is with group messaging.

Anytime is said to have virtually no dependance on phone numbers, unlike competing apps such as WhatsApp. Instead, everything is handled with usernames and Twitter-like  replies. To add a new member to a group message, all you have to do is @ mention them.

Anytime by Amazon will apparently let you “reach all your friends just using their name” without needing their phone numbers. It’s unclear what that means exactly, but it could mean the app hooks into existing social networks and other messaging services.

There’s also support for location sharing, simultaneous music listening, food ordering, and bill split. Amazon also says that the app will support business chat, a feature being worked on by Facebook and Apple as well.

Amazon has been putting a renewed focus on communication with its Alexa line of devices, and Anytime seems like the perfect service to integrate into the virtual assistants. Most notably, Anytime could be particularly useful on the Echo Show, which offers a screen and camera for more feature-rich communication. Even on the voice-only models, however, you could simply say “Send Zac a message” to easily communicate without lifting a finger.

Of course, one of the things this world probably doesn’t need is yet another messaging app, but nevertheless we’ll be sure to keep you updated on if Amazon confirms the existence of Anytime. 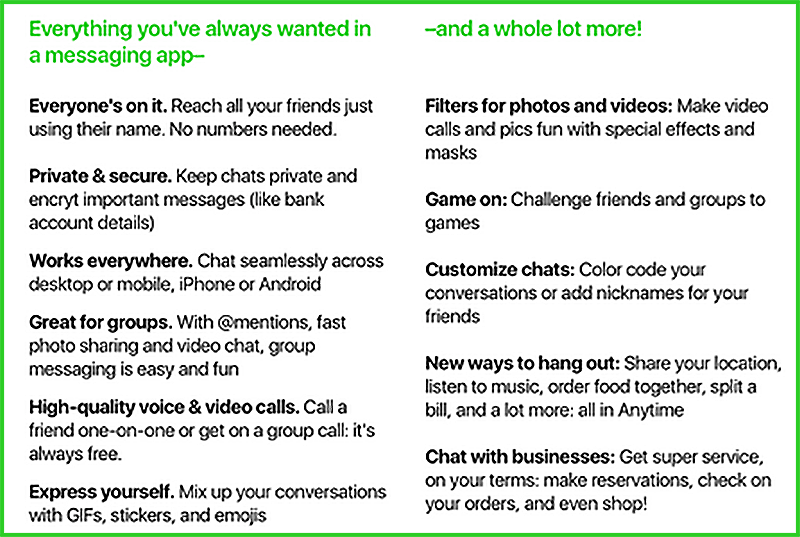