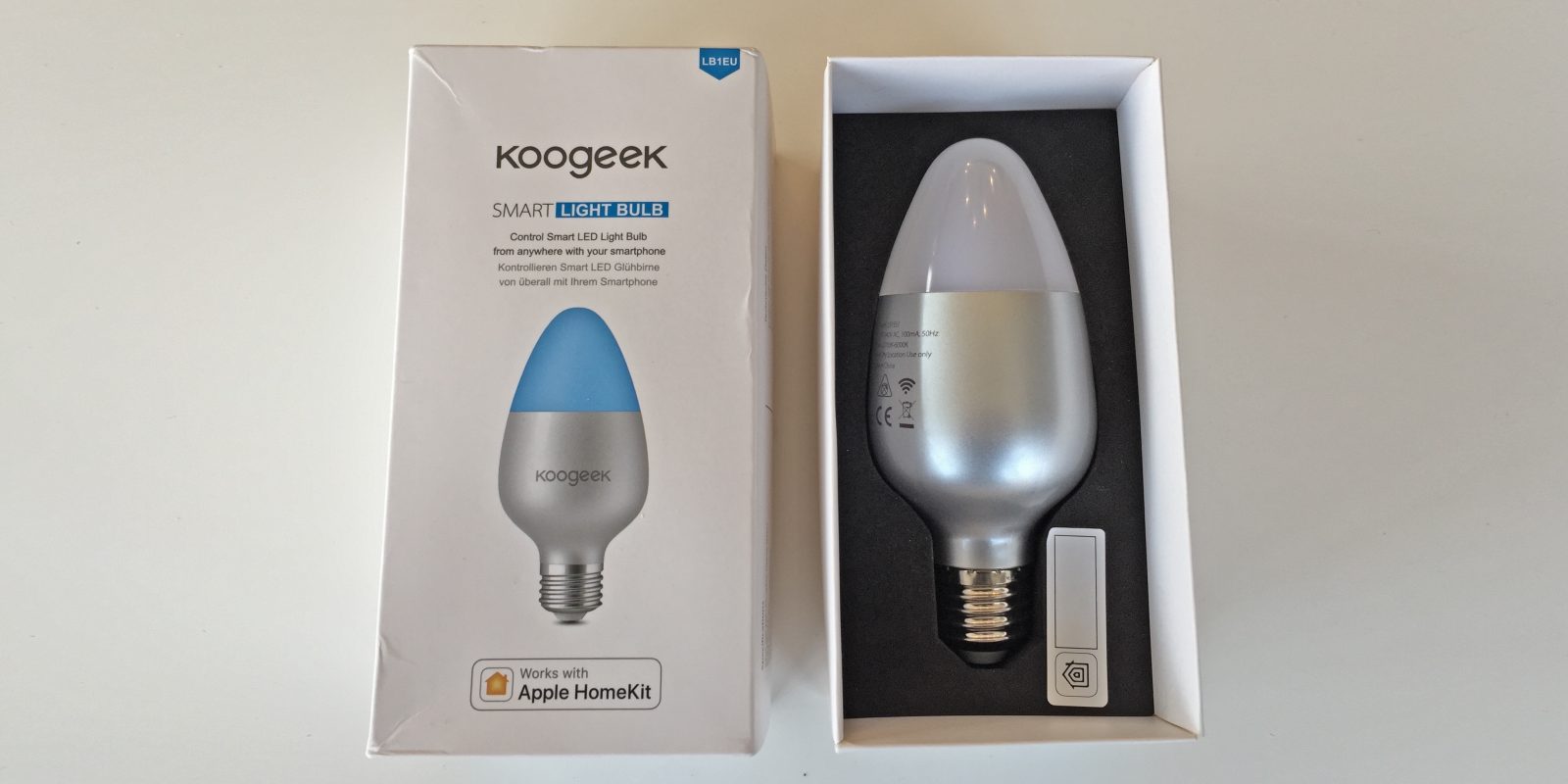 The HomeKit ecosystem continues to expand with new accessories coming out all the time. Koogeek has now released the first hub-less HomeKit light bulb ($36) that can display more than 16 million colors. Existing solutions like Philips Hue require running a bridge hub in additional to buying the special multicolor bulbs.  The Koogeek solution is simpler and easier to recommend as a gift item — just replace your current bulb and you are pretty much good to go.

The Smart Bulb integration with HomeKit enables users to toggle the light on and off, change color and set the brightness level; everything is accessible from the Home app on iOS or with Siri voice commands. The hub-less approach has some tradeoffs, but on the whole it is a great accessory that adds smart home features to a room with very little fuss. Read on below for my full hands on …

The installation and set up is pretty much as you would expect. The nice thing, of course, compared to most other smart bulbs is that there is no hub to plug-in and configure. I screwed the bulb  — it’s an Edison screw type — into the light fitting and scanned the HomeKit code using the Home app.

Aside: the Koogeek manual tells users to download the Koogeek app and control the accessory using their app. As always, I ignored this recommendation and used the Apple Home app for everything, which is preinstalled on any iOS device since iOS 10.

About 30 seconds after scanning the identification tag, with the time mostly spent watching the loading spinner, everything was set up and the accessory was added to my HomeKit home.

Like other products in the Koogeek HomeKit range, the bulb communicates over WiFi. Whereas I have found Bluetooth-based HomeKit smart home accessories to be pretty unreliable, the WiFi equipment is very responsive. The same is true for the Smart Bulb.

You can tap the platter for the bulb to toggle it on or off, or 3D Touch to change its color. In the Apple Home app, you pick colors by dragging across a color wheel. The bulb state responds in under a second, so it feels like a very futuristic and connected experience.

The Koogeek bulb can show a wide variety of colors although I was slightly disappointed by the reproduction on some of the selected hues; it isn’t as fine-grained as the color wheel makes it first appear. The ‘pink’ is a lot closer to white than I expected, even ‘dark pink’ isn’t that pink. If you care more about finding a specific color temperature rather than rainbow hues, you can pick from a different wheel that goes from warm to cool shades of yellow and white.

Naturally, you can also control the bulb with Siri voice commands. All the usual commands will work: ‘turn bedroom light off’, ‘set living room light color to dark red’, ‘set bedroom light brightness to 50%’ etcetera. Again thanks to the 2.4Ghz underlying WiFi connection, Siri is able to complete my queries very quickly.

I would like HomeKit to support a rainbow color option. This would automatically cycle through all the vibrant colors in the rainbow at a set rate. If you have friends over and want to pump the party atmosphere, it would be cool to be able to blast music with psychedelic lighting. This is not currently possible in the HomeKit spec.

Because HomeKit doesn’t have any concept of it, the Smart Bulb cannot do it (nor can any other multi-color HomeKit bulb available today). 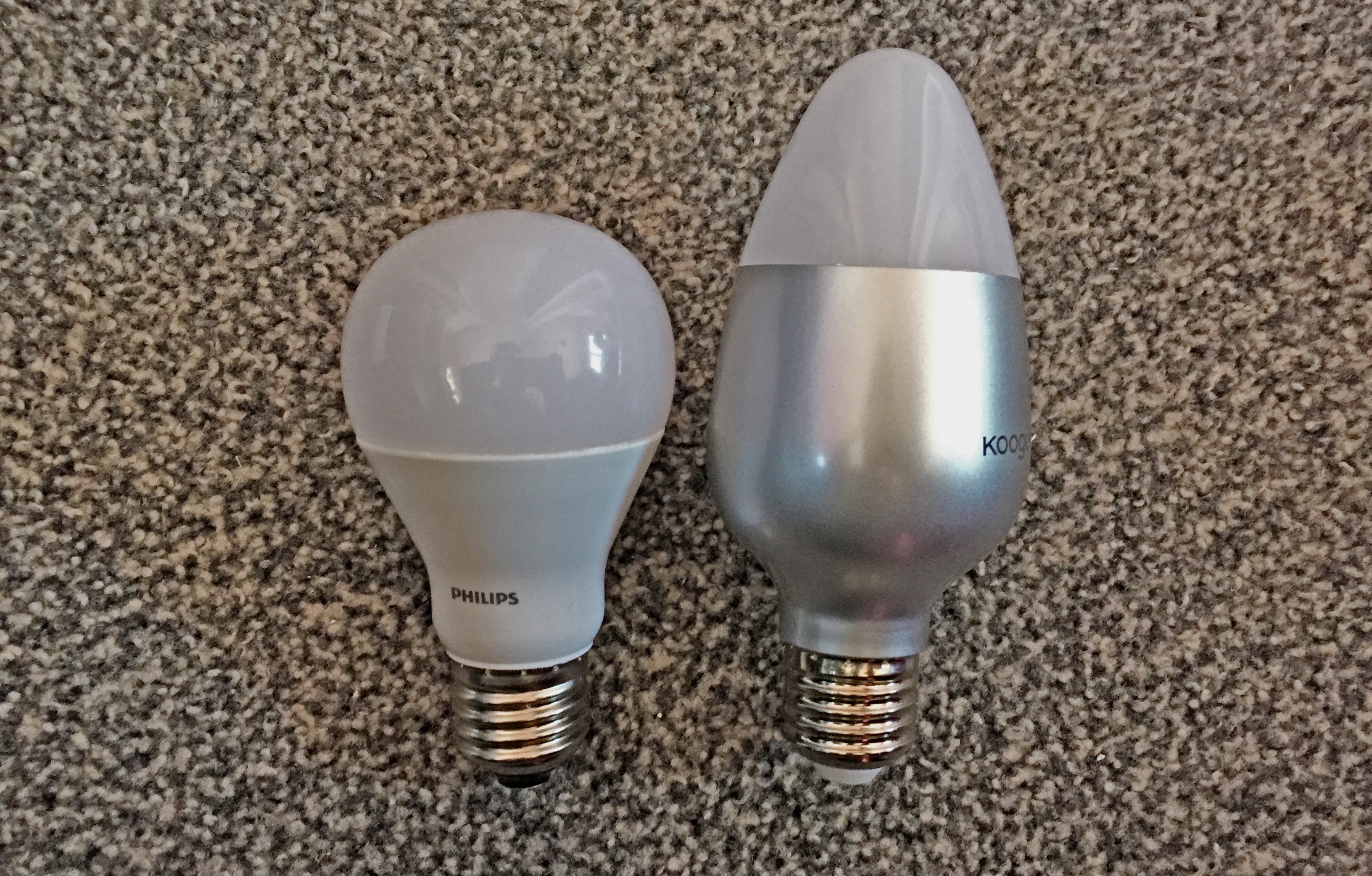 The specific hardware disadvantage of the Koogeek Smart Bulb over the competition is simply its size. With no hub, all the electronics and antennas are housed inside the bulb. This makes the bulb considerably larger than other HomeKit bulbs. For instance, see how bulky it is next to a Philips Hue bulb. It is also significantly heavier than a Hue bulb, not that weight really makes a difference when it’s snugly snapped into its socket.

How much its obese nature imposes on the room will vary. If you are putting the bulb into a light with a shade, you don’t really notice how big the bulb is. If it’s hanging bare, it’s probably going to be an eyesore. I also think there will be a few lights in the world that simply can’t fit the bulb because of its outsized chassis.

Aside from that, the Smart Bulb does what it says on the tin. It offers a good multi-color HomeKit bulb that doesn’t need a hub and responds quickly to HomeKit/Siri commands. It’s also reasonably priced: buy one off Amazon for under $40.

(Related: Koogeek has also recently released a new version of its HomeKit Smart Plug. It’s a small smart plug adaptor that features a nightlight and also works directly over WiFi, no hub necessary.)