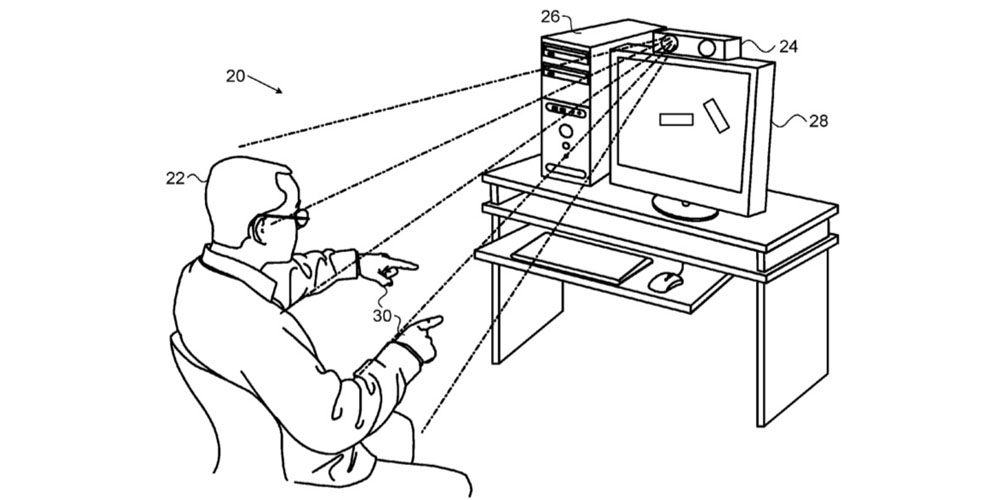 Apple has today been granted a patent for using hand gestures to control a Mac. The inventors named in the patent are from PrimeSense, the company that developed Microsoft’s Kinect sensor, and which Apple acquired back in 2013.

PrimeSense was also involved in developing some of the technology behind Face ID, and the patent here appears to rely on a similar TrueDepth camera in a Mac …

The patent specifically addresses the issue of how gesture mode might be activated, describing the use of a ‘focus’ gesture.

A method, including receiving, by a computer executing a non-tactile three dimensional (3D) user interface, a set of multiple 3D coordinates representing a gesture by a hand positioned within a field of view of a sensing device coupled to the computer, the gesture including a first motion in a first direction along a selected axis in space, followed by a second motion in a second direction, opposite to the first direction, along the selected axis. Upon detecting completion of the gesture, the non-tactile 3D user interface is transitioned from a first state to a second state.

Once engaged, additional gestures could then be used to control the Mac. Focus gestures illustrated in the patent drawings are pushing, waving and lifting a hand.

We’ve already seen an Apple patent application to use Face ID on a Mac, published even before the release of the iPhone X – a patent which goes further than simple unlock. My colleague Chance is not alone in waiting impatiently for this. A separate report suggested that Face ID may also be making its way to a future HomePod.

As always with Apple patents, there’s no way to know which ones will ever be adopted, but there’s obviously a credible team behind this one, and it does seem likely that the necessary hardware will make it into future Macs to enable Face ID.

On the other hand, Steve Jobs’ objections to a touchscreen Mac would also seem to apply here – it would be a tiring way to control a Mac for any significant period of time. For that reason, if this is ever adopted, I’d expect it to play a pretty limited role.