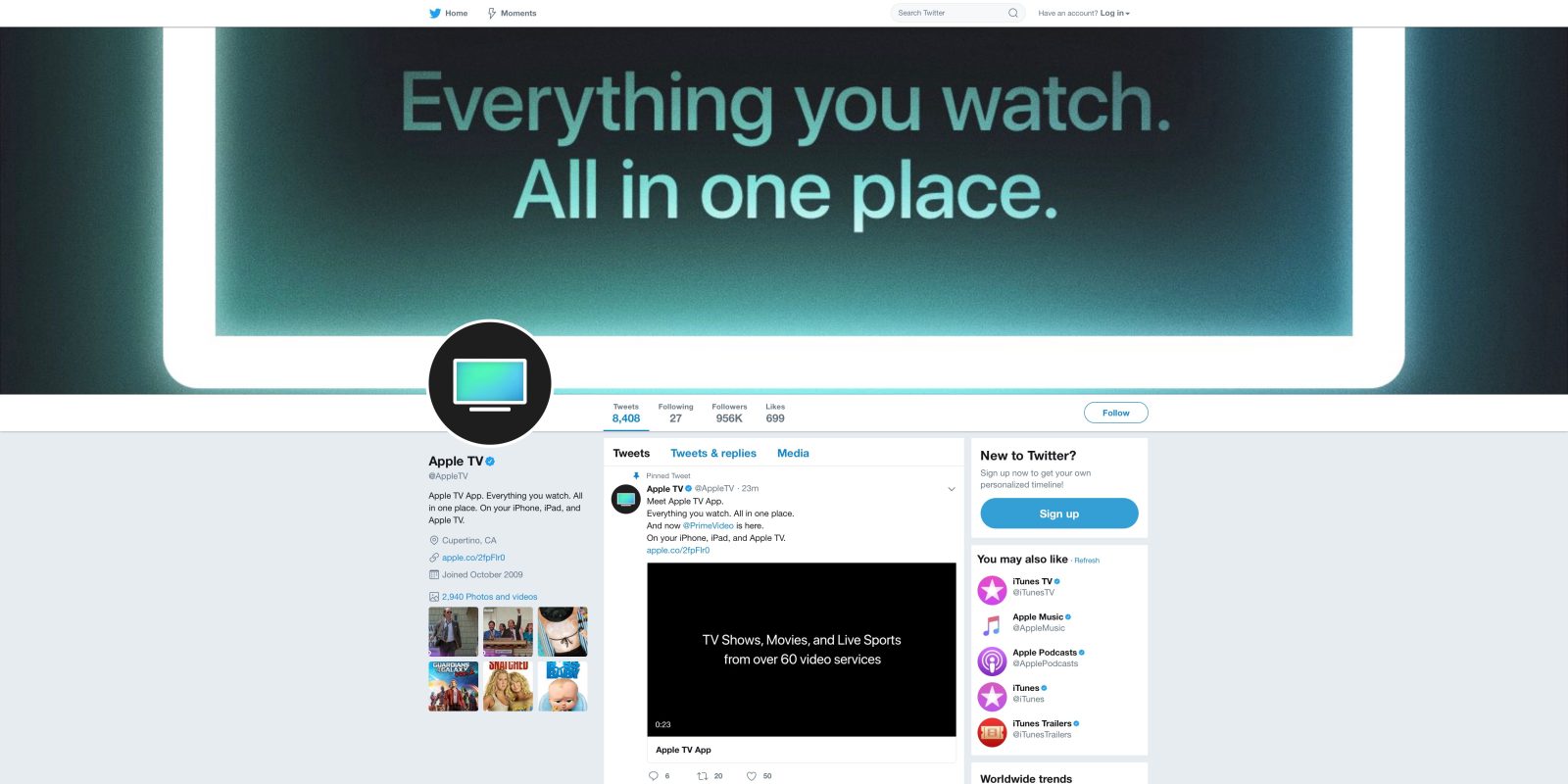 Following the launch of Amazon Prime Video on Apple TV, Apple has increased its Twitter presence with a new account dedicated to all things Apple TV. The shift sees the old @iTunesMovies account rebrand with a new @AppleTV handle, and the first new tweet from the account promotes the Apple TV app and Amazon Prime Video support. You can still find tweets from the original account deep in the timeline while the old handle is now protected so it can’t be reused outside of Apple.

Apple’s TV app is available on Apple TV, iPhone, and iPad, and the new @AppleTV account seems focused on that app versus the set top box hardware specifically. While the software is simply called TV, Apple does refer to it as the Apple TV app as well.

In addition to promoting today’s launch of Amazon Prime Video on Apple TV (3rd gen and newer) which has integration with Apple’s TV app, the newly rebranded account also highlights Live Sports features which were introduced with tvOS 11.2 this week.

Live sports integration works with live games broadcasted from ESPN with live scores and game time remaining displayed across multiple live games on a single interface. Scores can be optionally hidden as well. As part of live sports integration, the TV app can send alerts for close games so you can switch to those as they happen. The TV app also gains a new Sports tab as part of the update with the most recent sports categories presented first based on what is in season.

Meet Apple TV App.
Everything you watch. All in one place.
And now @PrimeVideo is here.
On your iPhone, iPad, and Apple TV.https://t.co/t8HrwrXyqT pic.twitter.com/RRWdHDJT0L

While Amazon Prime Video and Live Sports are both finally here, we’re still awaiting News integration in the TV app and a wider rollout to the UK and elsewhere which were both promised this year however.

The new Twitter account may also be a step toward Apple repackaging its video efforts in to a new streaming service. Apple currently has multiple original series in the works with top names like Steven Spielberg and Jennifer Anniston. Apple’s existing video efforts are squeezed in to Apple Music, although Carpool Karaoke and Planet of the Apps were both developed before Jamie Ehrlicht and Zack Van Amburg were hired from Sony Television to lead Apple’s TV efforts.