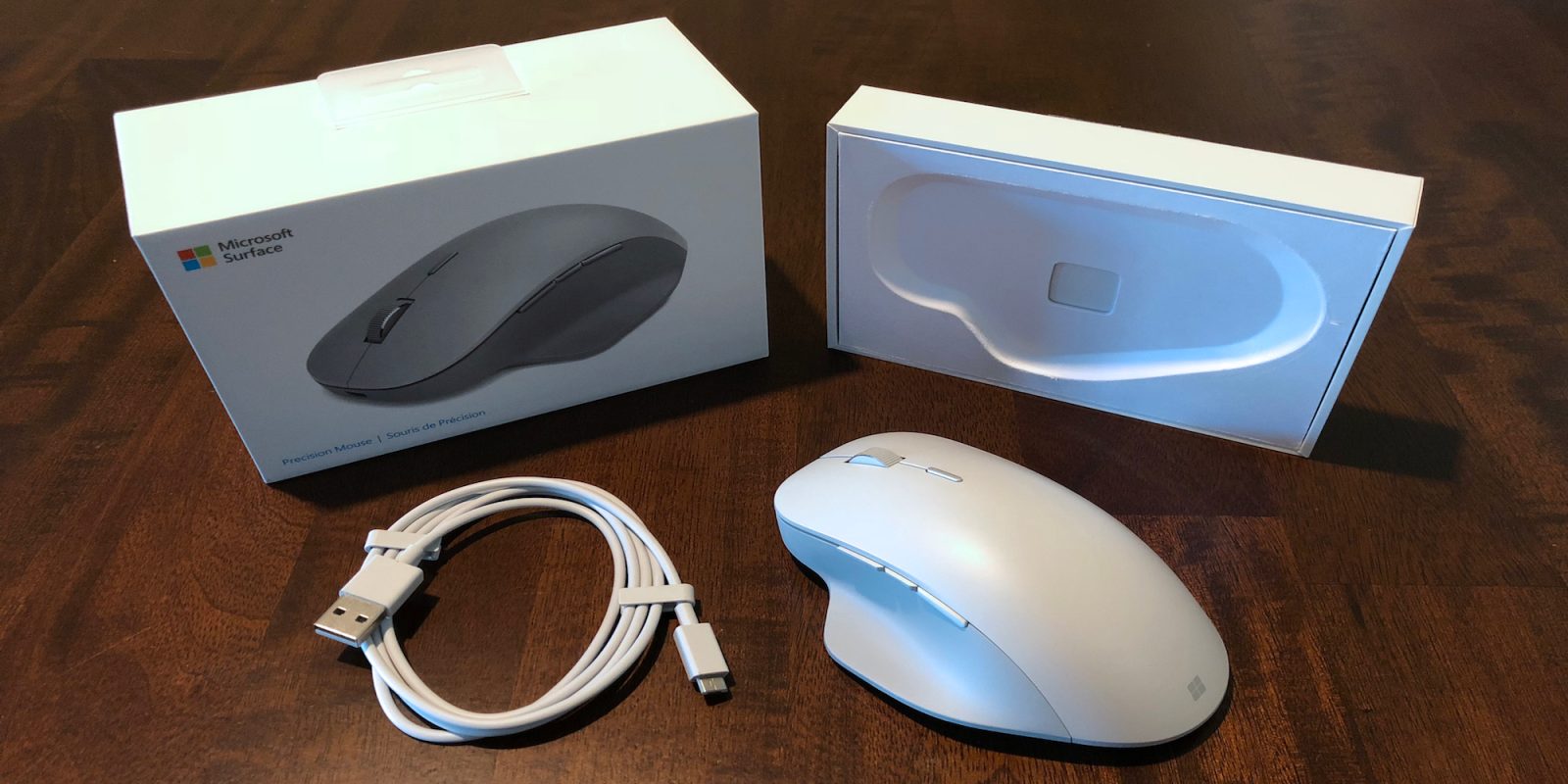 I have never been particularly fond of any of Apple’s mice. I appreciate the company’s dedication to simplicity when it comes to their products, but for my uses which include design and gaming, Apple focuses entirely too much on form over functionality.

As someone who frequently has multiple apps running at the same time, I find Mission Control (formerly Exposé) to be one of my favorite and one of the most useful features of macOS, and I like to use a third-party mouse that has extra buttons with my Mac so that I can program them for Mission Control’s window commands (specifically, Mission Control, Application Windows, and Show Desktop).

This makes switching between Photoshop documents or getting to a file on my desktop as simple as a mouse click. That’s why I decided to go against the grain, so to speak, and try the Microsoft Surface Precision Mouse.

Apple has made very clear their vision for a wireless future. For better or for worse, Bluetooth headphones, mice, and other peripherals are here to stay. I have embraced the wireless lifestyle, but have run into issues this year after upgrading from a 2014 15″ MacBook Pro to a 2017 15″ MacBook Pro.

Previously, I had no troubles using a Logitech MX Master 2S and a pair of Bose QC 35s or AirPods at the same time while paired to my 2014 MacBook Pro using Bluetooth. However, something has definitely changed with the design of the 2017 (and 2016, for that matter) MacBook Pro with Touch Bar and the means by which it works with Bluetooth peripherals.

Now, the MX Master 2S disconnects, hangs, or experiences severe lag when any Bluetooth headphones are used at the same time. Trevor Daugherty reviewed the new MX Master 2S with a new MacBook Pro with Touch Bar and a pair of QC 35s and did not encounter connectivity issues, but the same cannot be said for my experience.

I have successfully replicated my troubles with a colleague’s 2016 15″ MacBook Pro with Touch Bar and a separate MX Master mouse, so I don’t believe my hardware is at fault. Logitech’s “solution” is to use their included USB Bluetooth dongle, but that defeats the whole purpose of using a Bluetooth mouse in the first place (to say nothing of having to use a USB-C adapter to even connect the dongle to the new MacBook Pro).

I have since given up on Logitech’s Bluetooth mice and reverted back to using Apple’s Magic Mouse 2 because, for whatever reason, the Magic Mouse 2 works flawlessly for me when Bluetooth headphones are used at the same time. Unfortunately, it’s one of the most uncomfortable mice to hold and I can only program one Mission Control command as opposed to the three I prefer, so as a power user I find it lacking.

Microsoft piqued my interest with the announcement and subsequent release of their Surface Precision Mouse: a Bluetooth mouse with lots of extra buttons that Microsoft claims is Mac-compatible. I had hoped that this could be the device that gave me everything I was looking for in a mouse: Bluetooth connectivity with programmable buttons, but without the connectivity problems of the MX series, so I ordered one to test it out.

The Microsoft Surface Precision Mouse is a Bluetooth Low Energy device that requires Bluetooth 4.0 or later and features an ergonomic design with six buttons including a scroll wheel. It comes packed with a built-in, rechargeable lithium ion battery that, unlike the Magic Mouse 2, allows you to use the mouse while charging it at the same time.

According to Microsoft, the mouse can last up to 3 months on a single charge. Included in the box is a USB charging cable, though you’ll need a USB-C adapter to use it with the latest MacBooks. Like the MX Master 2S’ Flow technology, the Surface Precision mouse can be paired with up to three computers and transition seamlessly between them. Unfortunately, this feature requires Microsoft’s Mouse and Keyboard Center software and is only compatible with Windows 10 PCs.

The Surface Precision Mouse is very comfortable to hold and use, while it also feels solid and well-constructed. It is available in only one color: light gray. The lower portion of the mouse features a more “grippy,” rubberized chassis and the top section that makes up the left and right buttons is constructed from a smoother plastic. Pairing the device is as easy as you might expect. Open Bluetooth Preferences, flick the switch on the bottom of the mouse, and connect. Simple.

While connecting to a Mac is effortless, nearly everything else about the mouse ends up being a frustrating or limited experience as a Mac user. Yes, the Surface Precision Mouse is technically compatible with the Mac in that it will connect and allow you to use the left, right, and scroll wheel buttons, but that’s about it.

If you are looking to program the buttons, you’re out of luck in terms of support from Microsoft. Customization requires Microsoft’s Mouse and Keyboard Center software, which is only available to PC users. By comparison, Logitech makes its software available to Mac users right out of the box. 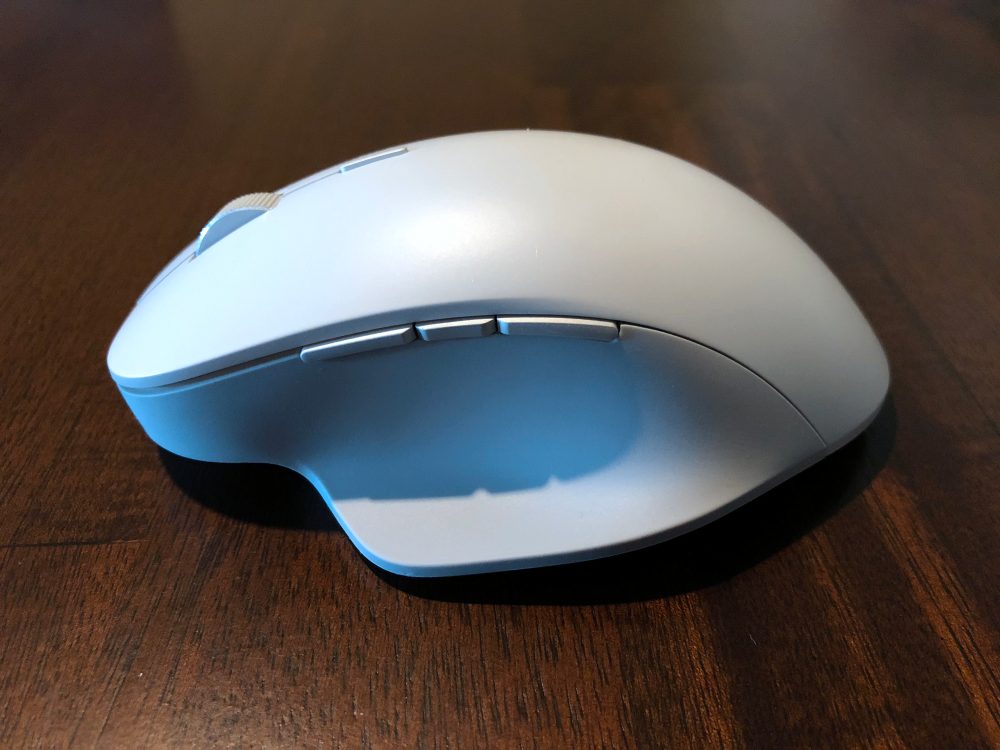 Mac users looking to program the Surface Precision Mouse’s buttons are not completely out of luck, but you’ll need to spend an additional $20 on third-party software to do so. I downloaded SteerMouse and was able to program every button but one. The middlemost side button refused to be programmed no matter what I tried. I reached out to SteerMouse and worked with their support staff to run a diagnostic test on the Surface Precision Mouse, which allowed them to update their software. In return, they sent me a beta version of SteerMouse 5 that now works with every button of Microsoft’s new mouse.

I wish Microsoft offered their own software, but it’s nice to know that a Mac solution does exist. I did reach out to a representative from Microsoft inquiring as to whether or not the company had any plans to support the Mac in the future. I did not receive a definitive answer, but was assured my feedback would be sent to Panos Panay and his device team.

Unfortunately, the Bluetooth performance of the Surface Precision Mouse (when used in conjunction with QC 35s or AirPods) suffered many of the same problems as the MX Master 2S. I never experienced a complete disconnection with the Surface Precision Mouse as I have with the MX Master 2S, but very noticeable lag to the point of being unusable presented itself.

I think this problem has more to do with Apple or the new 15″ MacBook Pro with Touch Bar specifically than it does Logitech or Microsoft, but given just how reliably the Magic Mouse 2 performs when paired with Bluetooth headphones, it would be nice if whatever is causing the issues could be remedied. I am by no means an expert in Bluetooth technology, but if anyone has a possible solution I would love to hear about it in the comments.

The mouse itself is comfortable, and while I found it connected to my Mac more reliably than Logitech’s MX Master series, I still experienced Bluetooth issues when I fired up my wireless headphones. Perhaps this has more to do with how the new 15″ MacBook Pro communicates with Bluetooth mice than it does the mice themselves (since I’ve had worse hiccups with the Logitech MX Master). If Apple’s vision for the future is to be truly wireless, they need to do a better job supporting third-party Bluetooth devices.

I keep hoping for the day when the perfect multi-button Bluetooth mouse presents itself, but in the meantime I have reverted back to using a Magic Mouse 2 on my Mac. It’s as uncomfortable as it is reliable, but “it just works.” The Surface Precision has been relegated to PC gaming.