The Pixelmator team has today released an important update to Pixelmator Pro (currently $60), adding new cropping abilities that didn’t quite make the cut for the 1.0 release. Other changes include tweaks to selection and text tools and many more bug fixes. Pixelmator Pro is available exclusively in the Mac App Store.

In my hands-on with Pixelmator Pro at launch, I noted that whilst it represented a milestone improvement in interface and overall capability, not every feature from the non-Pro Pixelmator made it in the app with the 1.0 release.

One of the big omissions I noted was the lack of custom aspect ratios for crops. This has actually prevented me from using the app for my 9to5Mac blogging work because our site uses 2:1 headers and Pixelmator Pro could not crop to that resolution.

With the 1.0.6 update, users can set custom aspect ratios and save them as presets. I now have a ‘9to5Mac’ named preset which crops to 2:1.

This preset will persist across application launches so I can use it again and again. You can drag and drop the custom preset to any position in the toolbar, and create as many custom presets as you like with unique names.

This is actually better than the old Pixelmator which could only remember the configuration for one custom crop ratio at a time, keeping up to the app’s ‘Pro’ nomenclature. 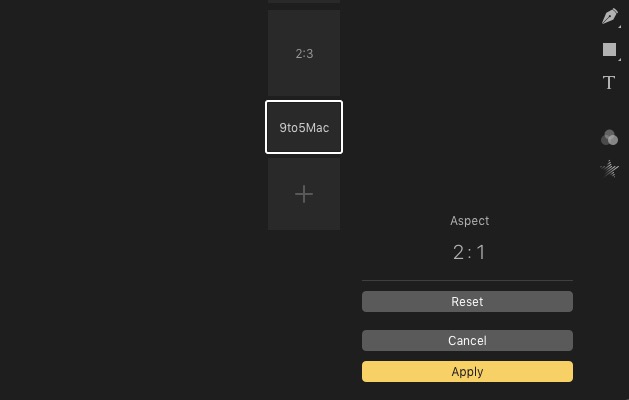 The latest update also brings some quality-of-life improvements when using text layers and making selections, including the ability to quickly move a rectangular selection by holding the space bar. There’s also more than twenty bug fixes individually listed in the release notes for the update, so check out the App Store to see everything that’s changed.

Get Pixelmator Pro exclusively from the Mac App Store.