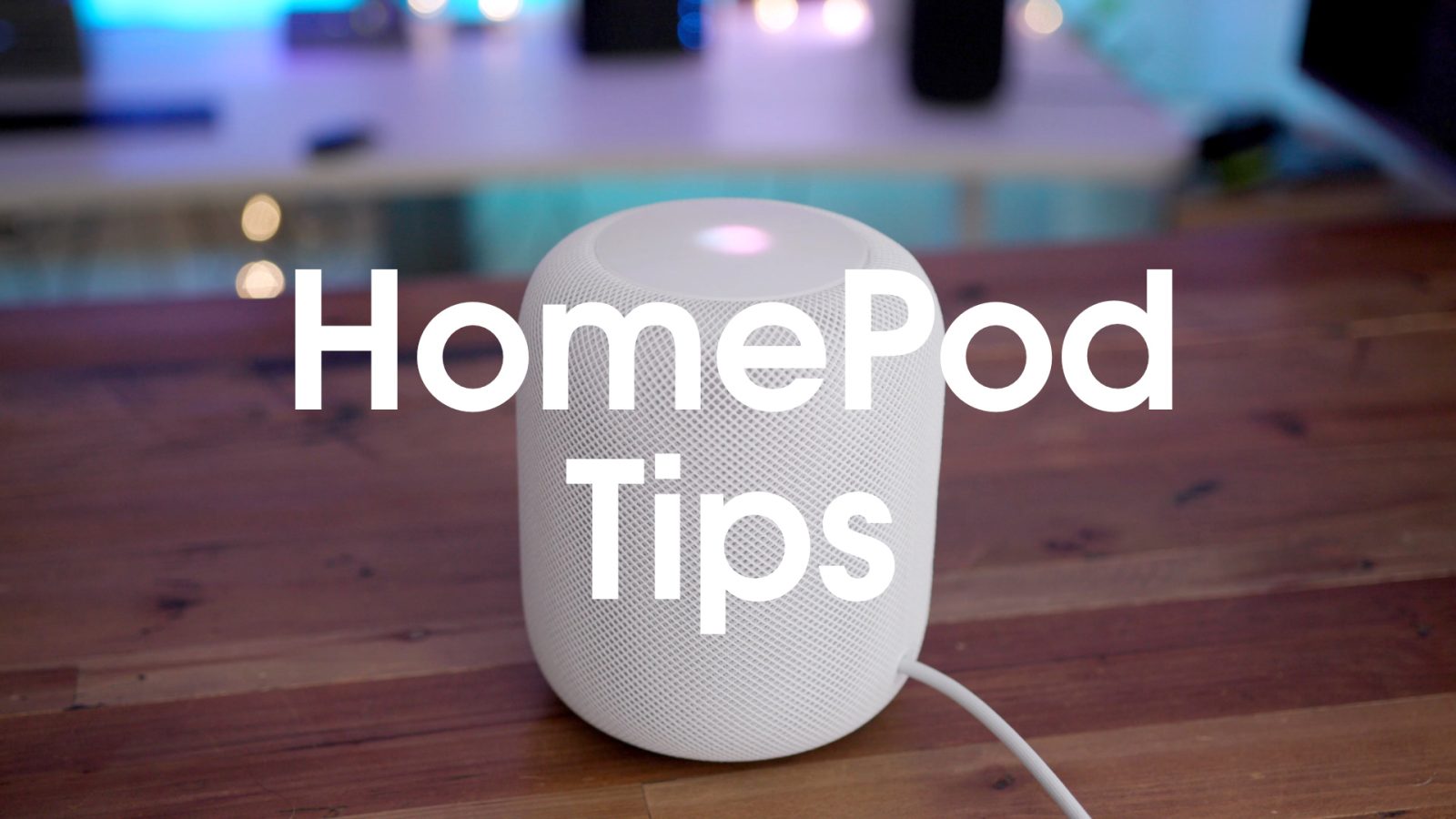 If you’re an Apple Music subscriber who’s all in on the Apple ecosystem, then the HomePod is a compelling smart speaker. Not only does it sound excellent, but it has Siri built in, which can do things like control your music and control smart home accessories.

HomePod isn’t yet as “smart” as Google Home products with Google Assistant, or Amazon products with Alexa, but it has loads of potential, and already features many built in conveniences. Did you recently purchase a HomePod? In this hands-on video, we’ll walk through some of our top must-know tips for new HomePod users.

To access HomePod settings, open the Home app, tap the Home tab, long press on the HomePod tile, and tap the Details button in the bottom right-hand corner.

Although each HomePod takes on the identity of the room its in, if you have multiple HomePods in the same room, giving them a unique name may be a good idea. To rename your HomePod, open its settings, and tap the name field at the top of the screen.

How to talk to Siri

There are two ways to invoke Siri. You can simply say ‘Hey Siri’ or you can long press anywhere on the HomePod touch panel and Siri will respond.

Keep in mind that when talking to Siri via Hey Siri, you don’t have to wait for Siri to respond before issuing your command. If you make your command a part of the initial Hey Siri command, you will have more success controlling HomePod.

So instead of saying:

How to disable ‘Hey Siri’

Disabling Hey Siri is easy, and can be done directly via the HomePod settings using the Hey Siri toggle. You can also disable Hey Siri by asking HomePod to do so via Siri. Simply say:

Siri will ask you to confirm with a yes before disabling Hey Siri. If you wish to enable Hey Siri again, you’ll need to do so directly from the HomePod Settings, or by manually invoking Siri using the HomePod’s touch controls.

How to control HomeKit accessories 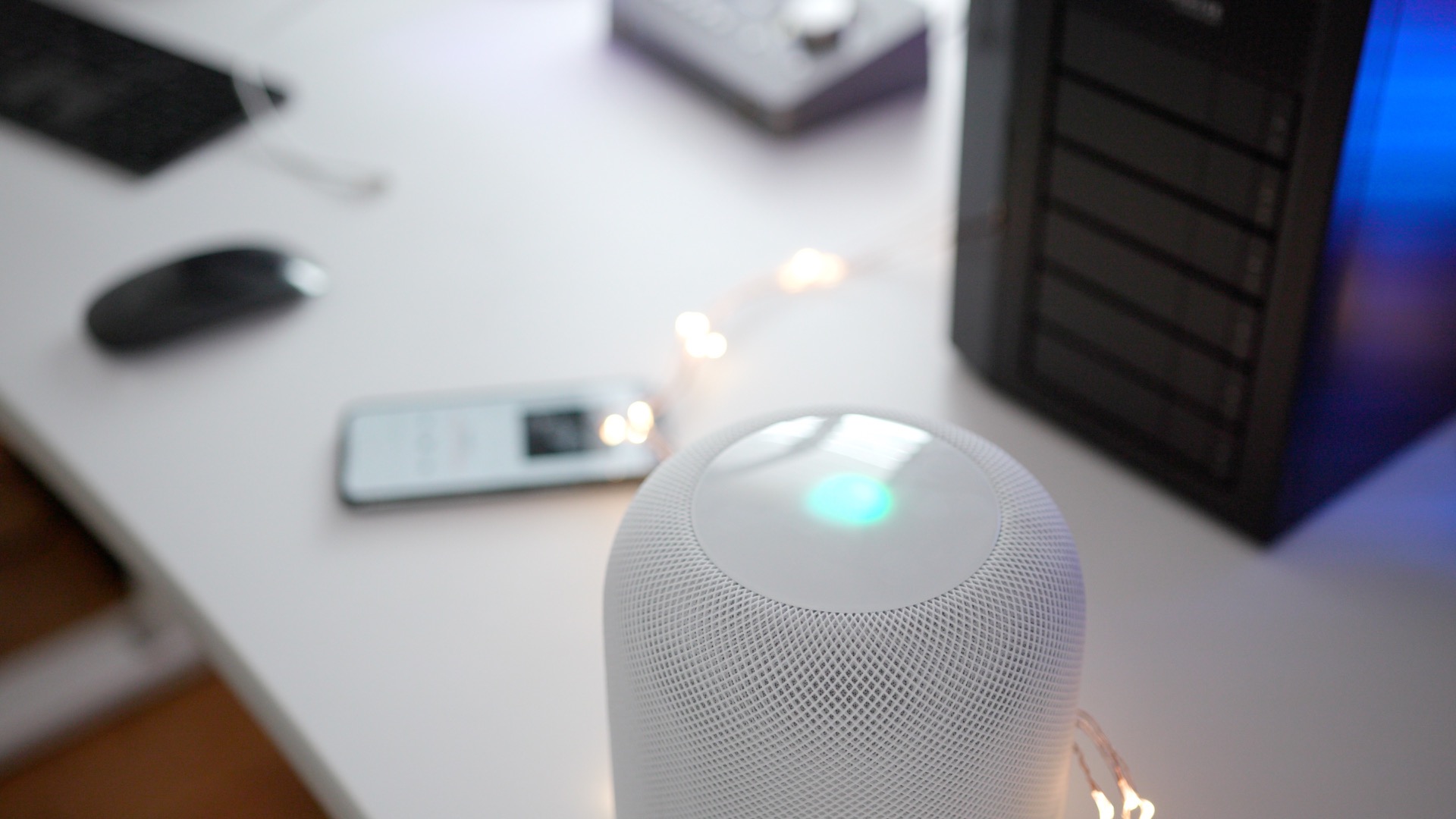 HomePod can be used as a hub to control most HomeKit accessories like smart lights and thermostats. Simply say something like:

You can also use Siri to control HomeKit scenes. For example, say:

How to set alarms on HomePod 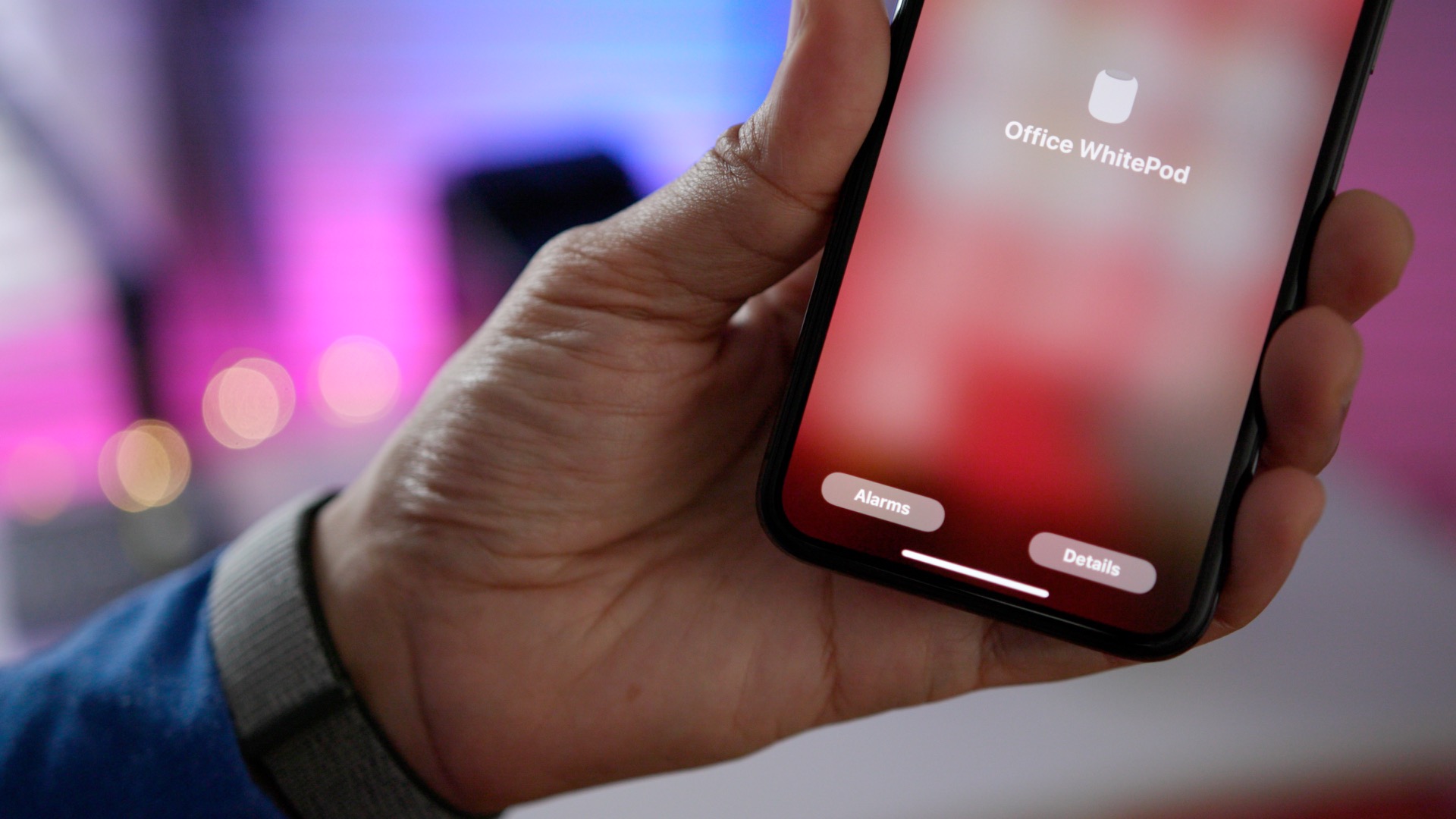 Keep in mind that HomePod alarms are separate from the alarms you set on your iOS device. There are two ways to set an alarm with HomePod. The first way is to use Siri:

You can also venture directly into the Home App, tap the HomePod tile, and tap the Alarms button in the bottom left hand corner.

How to play music with HomePod

The easiest way to play music on HomePod is to simply ask Siri. Just say:

Keep in mind that you can only play music Apple Music, iTunes Match, iCloud Music Library and iTunes Purchases via your voice.

How to adjust HomePod volume 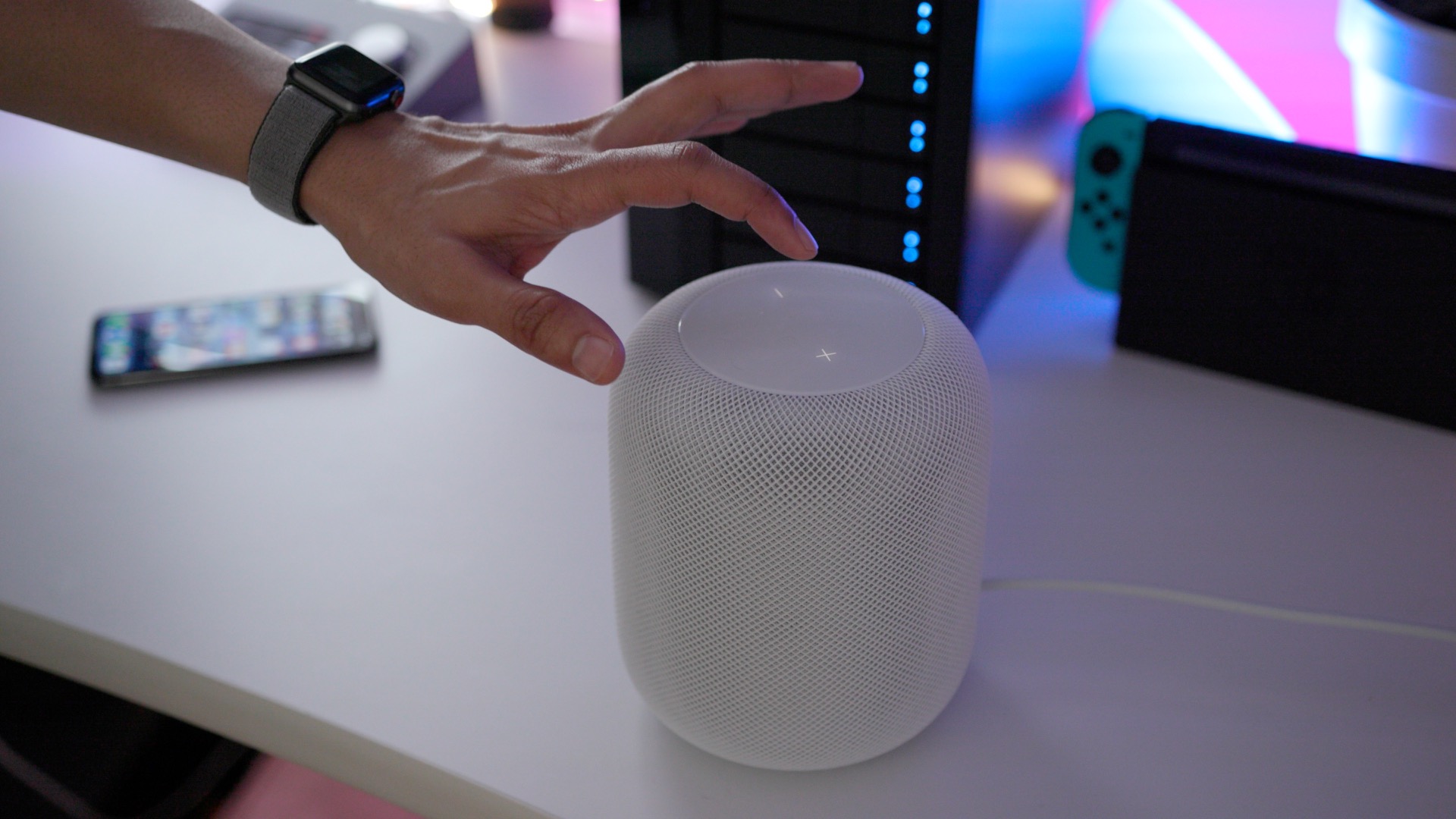 There are several ways to go about adjusting volume with HomePod. For starters, you can use the touch controls to incrementally adjust volume up or down. You can also long press on the + or – buttons to quickly adjust volume in either direction.

Of course, you can also ask Siri to adjust volume as well. Some valid commands include, Hey Siri…

How to control music playback

You can use Siri to control music playback on HomePod. Simply say:

The HomePod’s touch controls can also be used to control music playback, much like the EarPods inline remote controls.

How to play similar music on HomePod

Hey Siri, make a station from this song.

How to add a song to your library using Siri

If you’d like to save a now playing song to your music library, say:

Hey Siri, add this song to my library.

How to play Podcasts on HomePod

You can playback your favorite podcasts on HomePod by saying something like:

Request the latest news from Siri

You can change your news source by saying:

How to add a song to Up Next using Siri

To keep the music playing, use the Up Next feature to queue up songs to play next. Say Hey Siri…

Add ‘Hotel California’ to Up Next.

If you’d like to check which song is queued to play next, say:

Hey Siri, what song is up next? 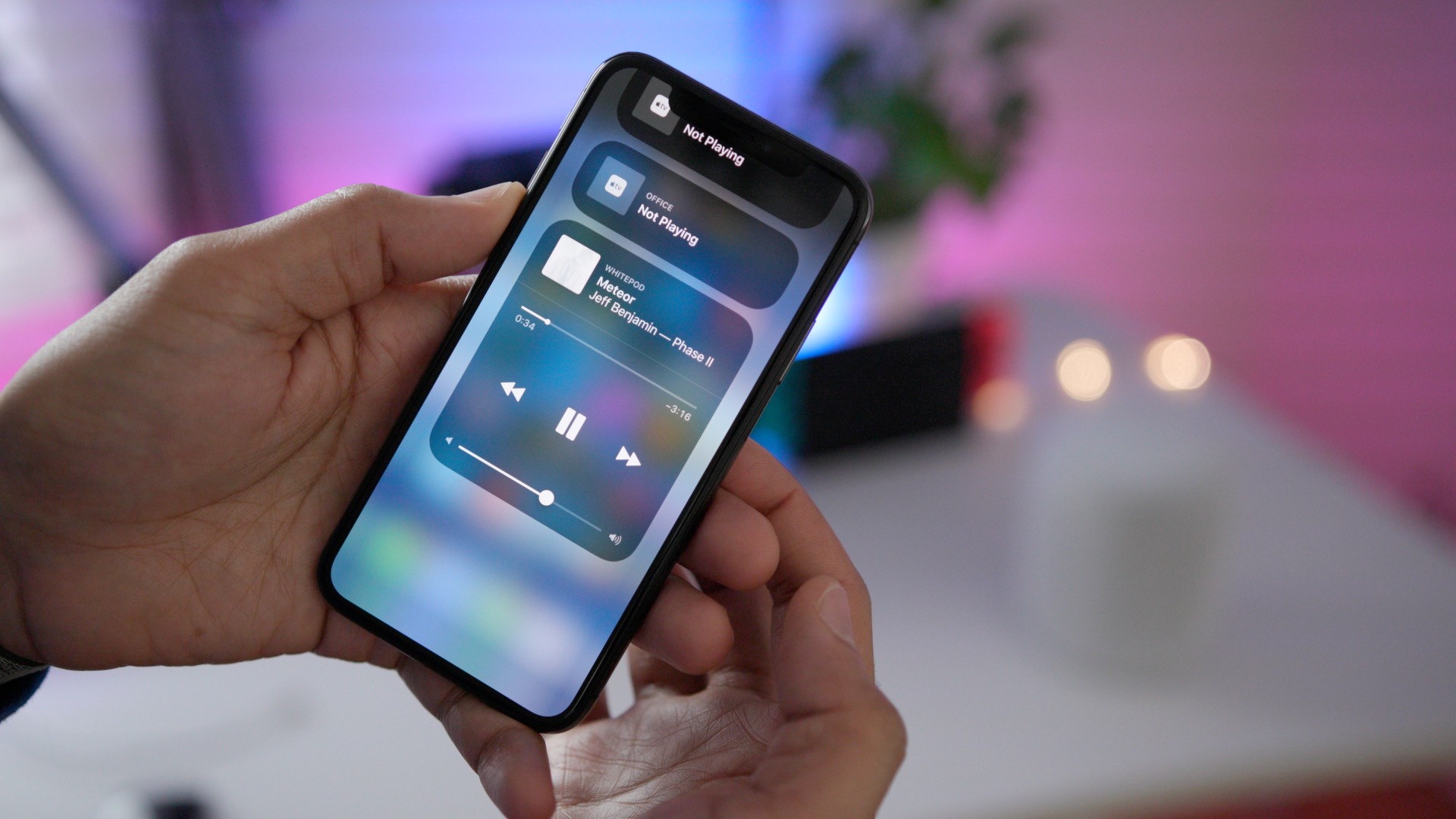 Although it’s not very discoverable, it’s possible to control and view details about the currently playing song directly from an eligible device, like an iPhone, on the same network.

To do so, invoke Control Center, and long press on the Music widget. Scroll to your HomePod, and you should see the currently playing song. Tap on the HomePod to expand the Now Playing controls, which will allow you to play/pause, skip, and go back to the previous song.

You can also use the HomePod Now Playing controls to adjust playback volume directly.

It’s possible to fully control Apple Music, including selecting additional songs, and queueing up music, directly from an iOS device on the same Wi-Fi network as HomePod.

There are two ways to do so:

The first way is to invoke the HomePod Now Playing interface as described in the previous step, and tap on the album artwork to open the Music app. From there it’s possible to control your music just like you would when playing music directly on an iOS device.

The second way to access full HomePod music controls is to open the Music app, and tap the AirPlay button at the bottom of the Now Playing interface. Once you do, you will be able to access the HomePod, and control music playback directly. 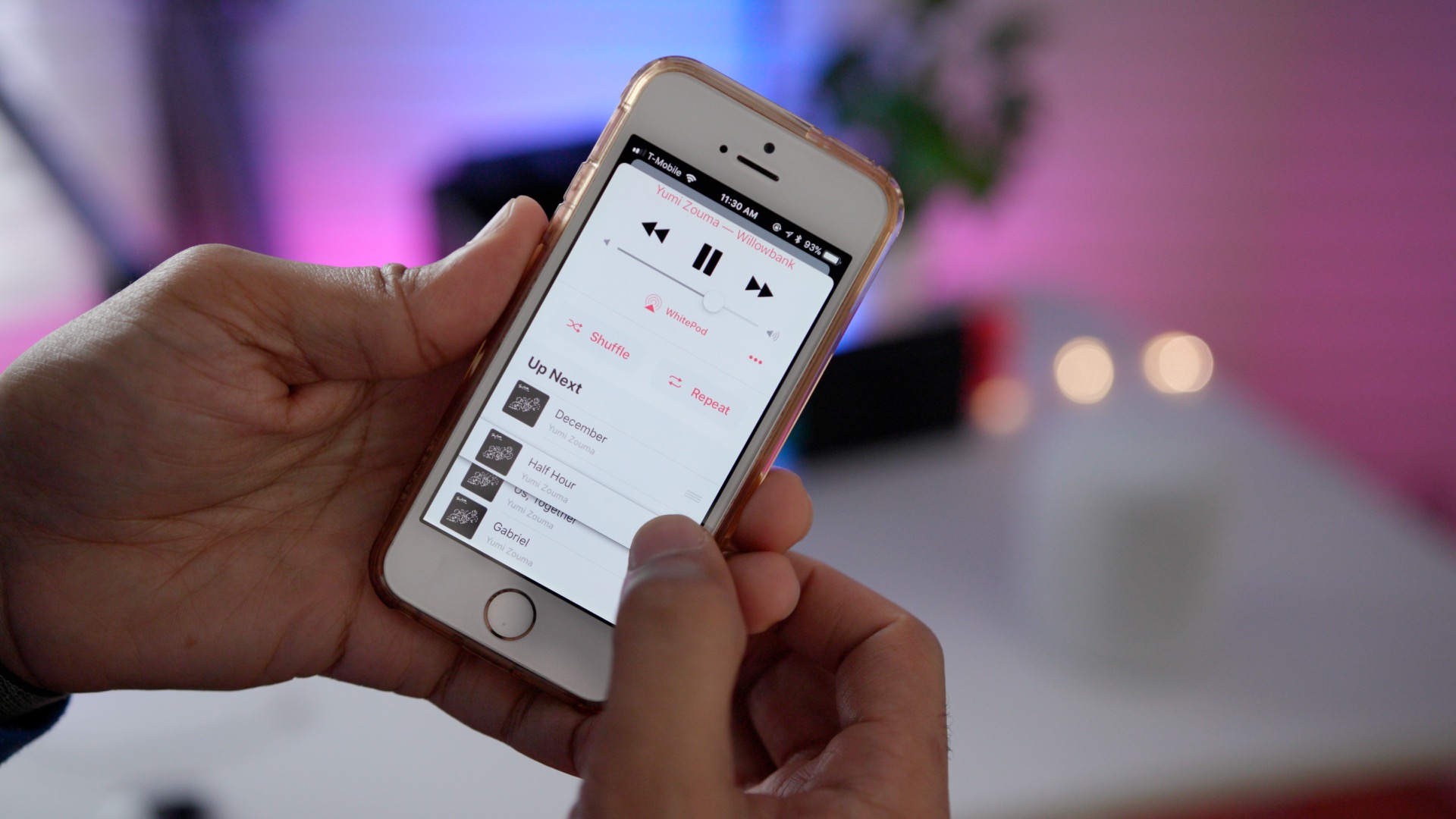 One cool thing about controlling HomePod from an iOS device using the music app is that you, or anyone else on the same Wi-Fi network with Apple Music can contribute to the Up Next queue.

Simply access the HomePod controls as described in the previous steps, long press/3D Touch on a song, album or playlist, and select Play Next. This allows multiple people to contribute to the Up Next queue, which is great for parties.

How to transfer a phone call to HomePod

Although you can’t initiate a phone call from HomePod, it is possible to transfer a call to HomePod to continue a conversation. While on a phone call, tap the audio destination button in the Phone app interface, and select HomePod.

You’ll know when HomePod is hosting a phone call by the green Siri indicator on top of the Touch Panel.

How to output sound via Apple TV 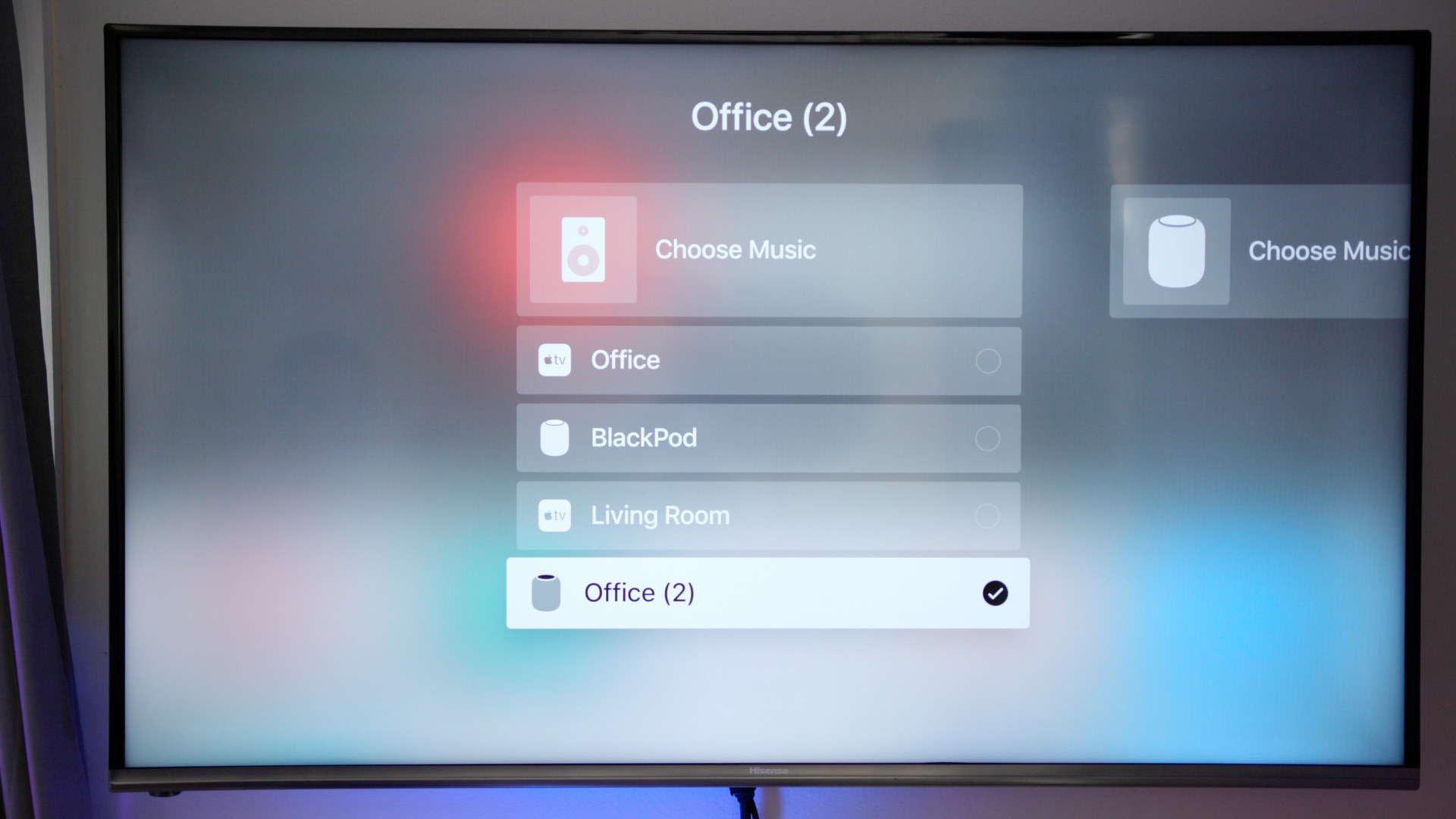 There are several ways to go about connecting the Apple TV to HomePod for audio output. The easiest way is to simply press and hold the Play button on the Siri Remote while on the Apple TV Home screen. Doing so will invoke an interface, shown in the photo above, that allows you to quickly select audio output.

You can also go to Settings → Video and Audio → Audio Output and select the HomePod as output. Other apps, like the Music app, allow you to select audio output options directly as well.

One of the major benefits of outputting sound from Apple TV to HomePod is that it surfaces a limited amount of voice controls. While watching content, you can control playback via HomePod using the following Hey Siri commands:

In the future I imagine that Apple will work on fleshing out Apple TV voice control via HomePod to be more closely aligned to what’s possible via the Siri Remote. But even now, in this limited state, using HomePod to control the Apple TV playback experience is pretty awesome.

How to AirPlay to HomePod from Mac 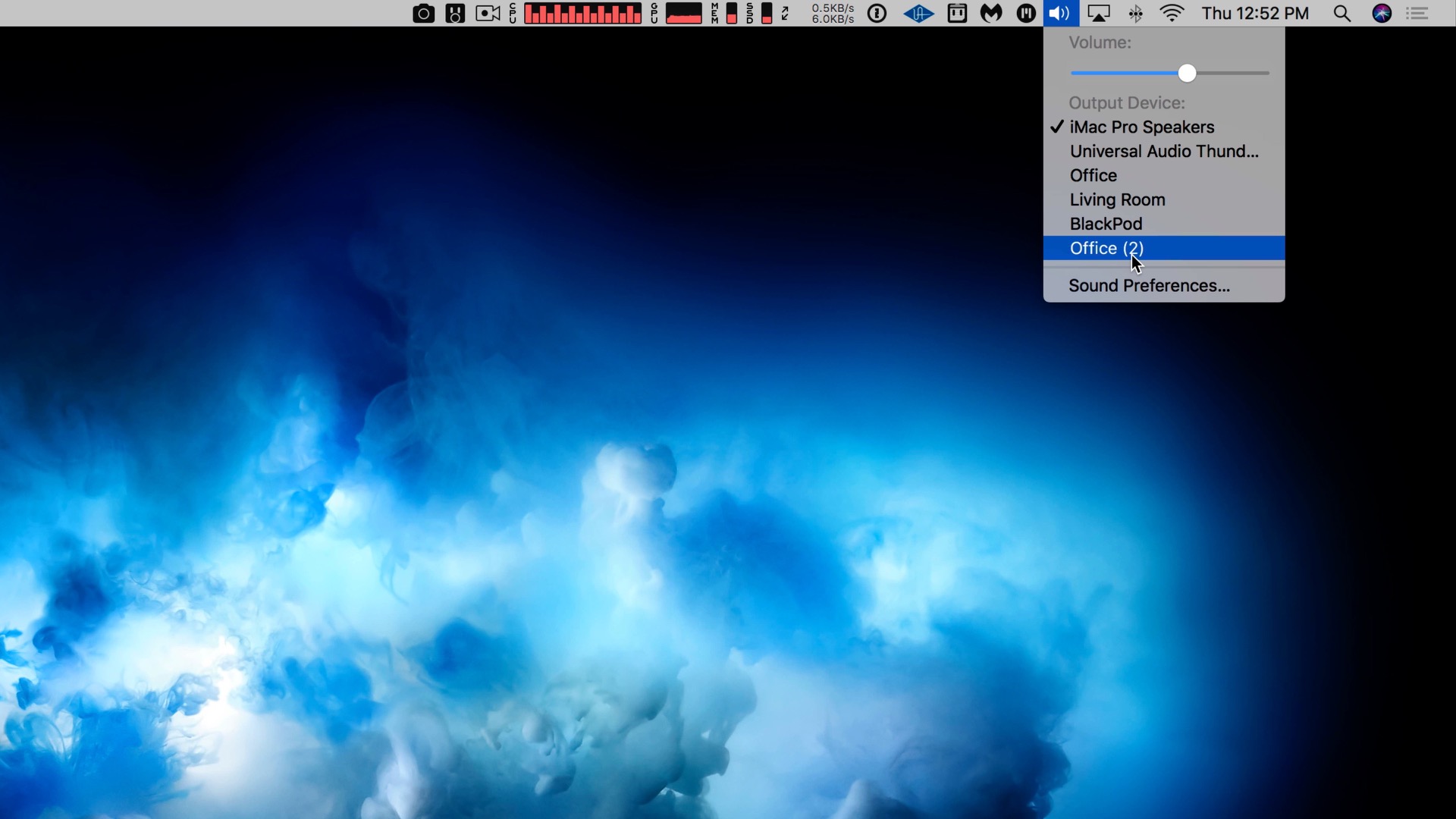 To AirPlay all sounds coming from your Mac, you should enable the Show volume in menu bar option located in System Preferences → Sound. Once you do, you’ll be able to easily select your Mac’s sound output destination, which includes the HomePod, by clicking on the Volume button in the menu bar.

How to AirPlay to multiple HomePods using AirFoil 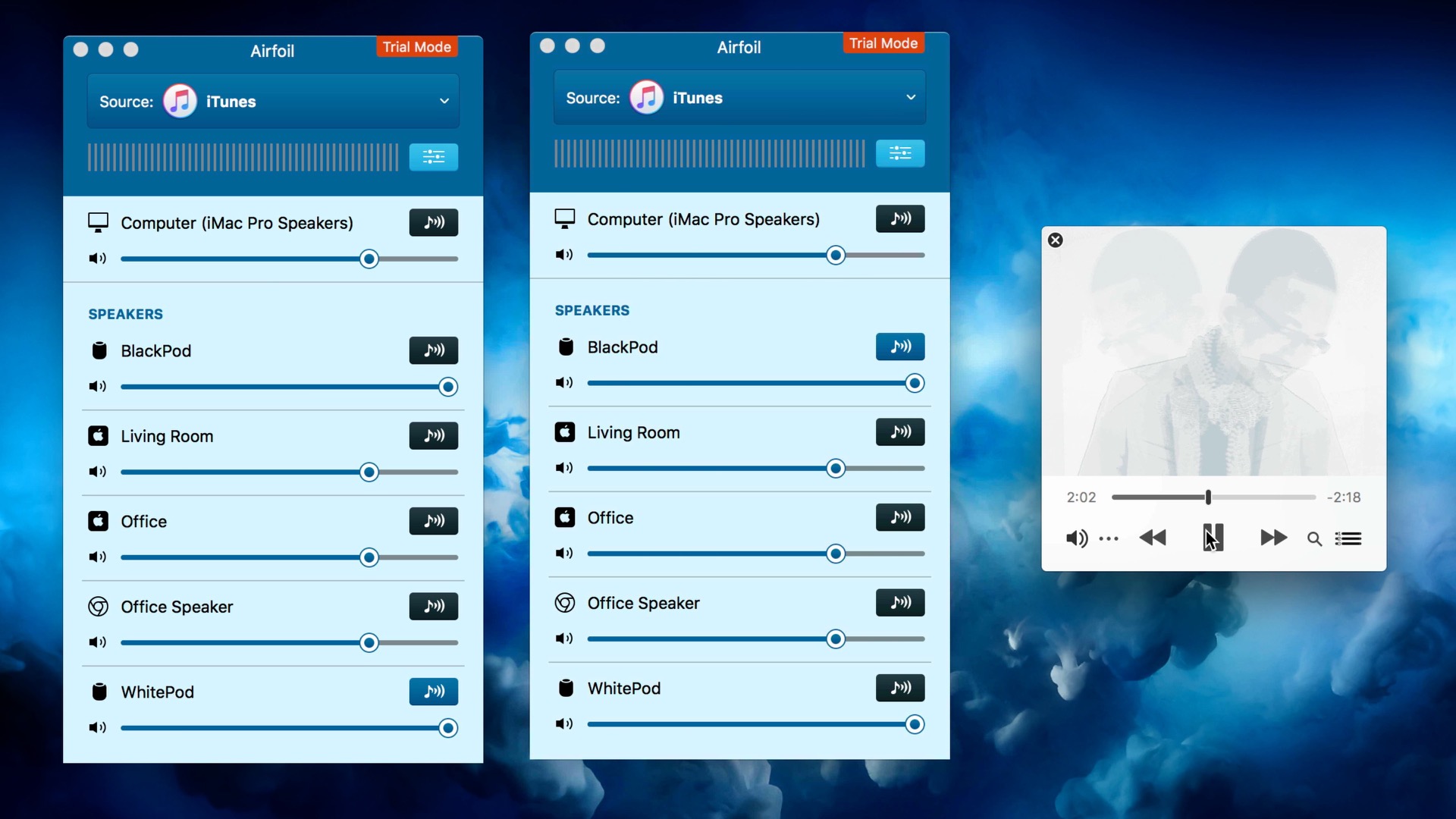 Users will be able to facilitate stereo pairing with two HomePods once AirPlay 2 launches in a future iOS/HomePod software update. For now, it’s possible to enable “stereo” playback via AirFoil, a paid Mac utility. It’s not exactly what Apple had in mind with AirPlay 2, but it’s an interesting workaround until stereo pairing launches alongside iOS 11.3 in the near future.

How to reset the HomePod 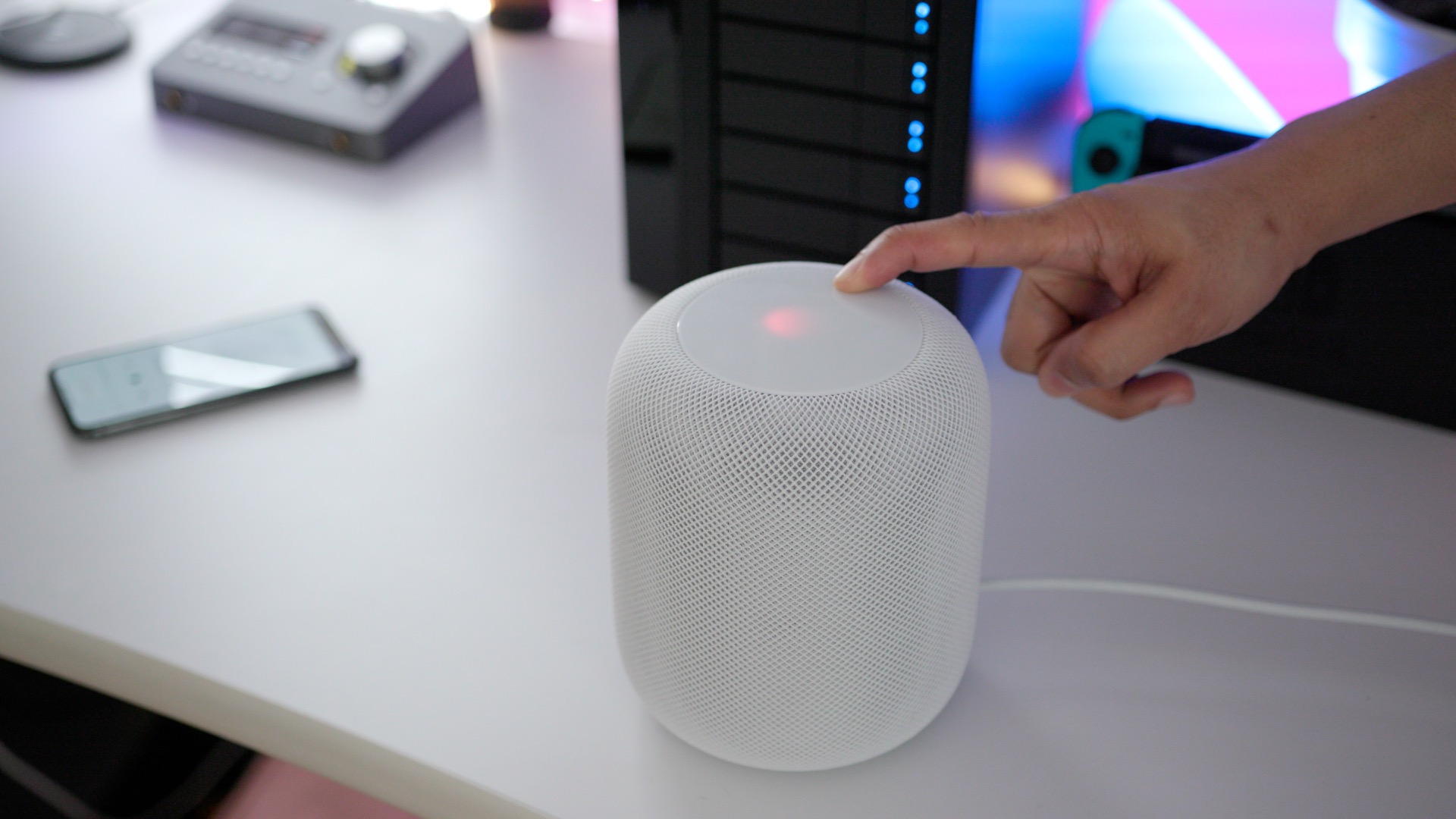 There are two ways to go about resetting the HomePod. The easy way is to venture into HomePod settings via the Home app. Once there, you’ll find a Remove Accessory option at the bottom of the screen.

The second way to reset the HomePod, and the method that you’ll need to use if resetting via the Home app fails, is to do so directly from the HomePod itself.

Step 2: Plug in the HomePod, and after three seconds elapse, tap and hold the touch surface.

Step 3: Continue to hold the touch surface, and you should see the touch control status indicator turn red. Continue holding the touch surface until you hear three beeps. The HomePod will then reset, allow it to be reconfigured from scratch.

There are many more Siri commands that you can utilize to control HomePod. What are some of your favorite commands? What other HomePod-related tips do you have to share? Sound off in the comments below with your feedback.