After Apple Park, here’s a possible shortlist for the location of Apple’s next US campus 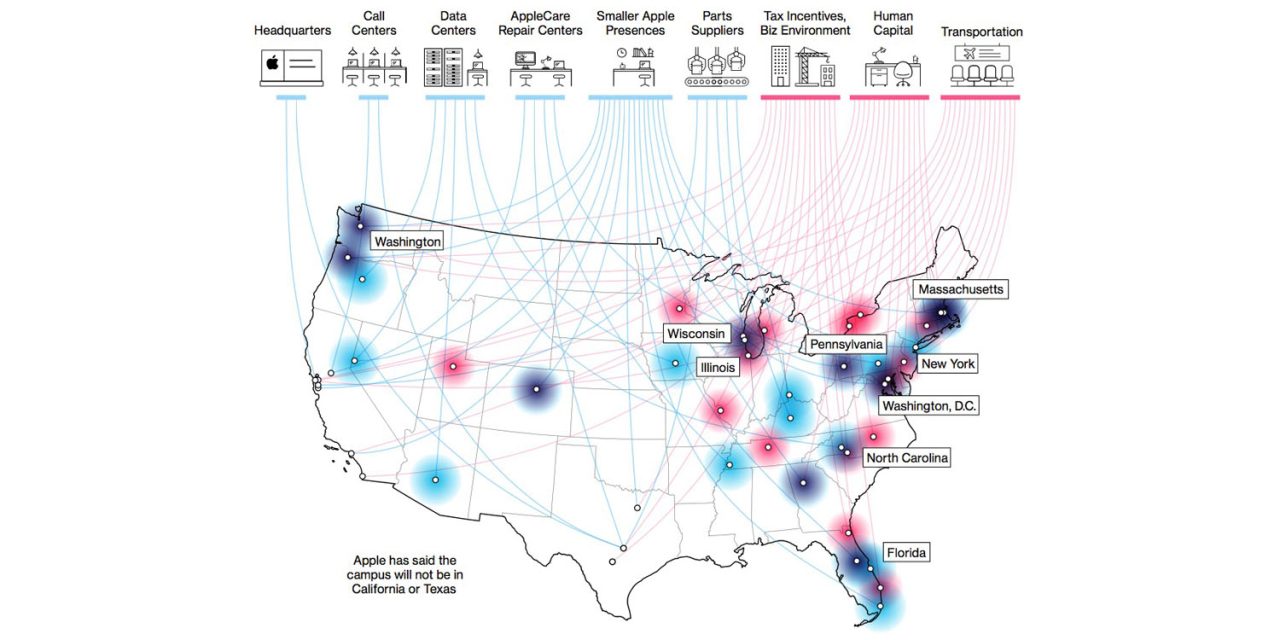 Apple Park may be the most dramatic and ambitious campus for the company, but it won’t be its last. Apple is already planning its next one, at an as yet undisclosed location.

Bloomberg, working with Moody’s Analytics data, thinks it has come up with a shortlist of likely locations for the campus …

Bloomberg notes that while Apple hasn’t yet said where the new building will be – a significantly smaller one with a primary role as a tech support center – it has said where it won’t be.

The iPhone maker has said the new facility won’t be in California or Texas and that initially it will house call-center staff.

The piece factors in where Apple already has a corporate presence, speculating that it wouldn’t want the new campus to be too far from existing facilities, and then considers three further factors it thinks likely to influence the decision:

To rank cities by these factors, Bloomberg uses data from Moody’s Analytics. It says that while Apple is unlikely to engage in an Amazon-style bidding war to see which cities will offer it the most tax-breaks, incentives will surely play a role.

Here are America’s top 15 cities ranked by tax incentives and local business environments, according to Moody’s Analytics. Like most companies, Apple will surely expect such incentives in exchange for its investment. A major company such as Apple could transform a city by jump-starting its economy of schools, retail stores, restaurants and the housing market.

Human capital – aka workforce education – may be less important given that the campus is geared to tech support rather than research or new product development. But transport links are always important.

Here are the top 15 cities based on public transit such as airports, subways and bus systems, according to Moody’s Analytics. Apple will be looking for an array of commuting options for employees. A nearby airport will also be crucial to serve Apple employees flying in from the company’s many U.S. offices.

Combine all the factors, and you get a list of potential candidate cities.

Apple seems likely to choose among northeastern states such as Pennsylvania, Massachusetts and upstate New York; North Carolina and Florida in the southeast; and Midwestern states like Illinois and Wisconsin. The East Coast has one obvious advantage: the ability to provide customer support before existing call centers in Texas and California open for the day, as well as its proximity to hundreds of suppliers. The company could also consider the northwest, where it has a couple of offices, including an R&D center for cloud services in Seattle, and several suppliers.

It will be interesting to see how accurate these guesses turn out to be, and what Apple has planned for the design of the new campus.