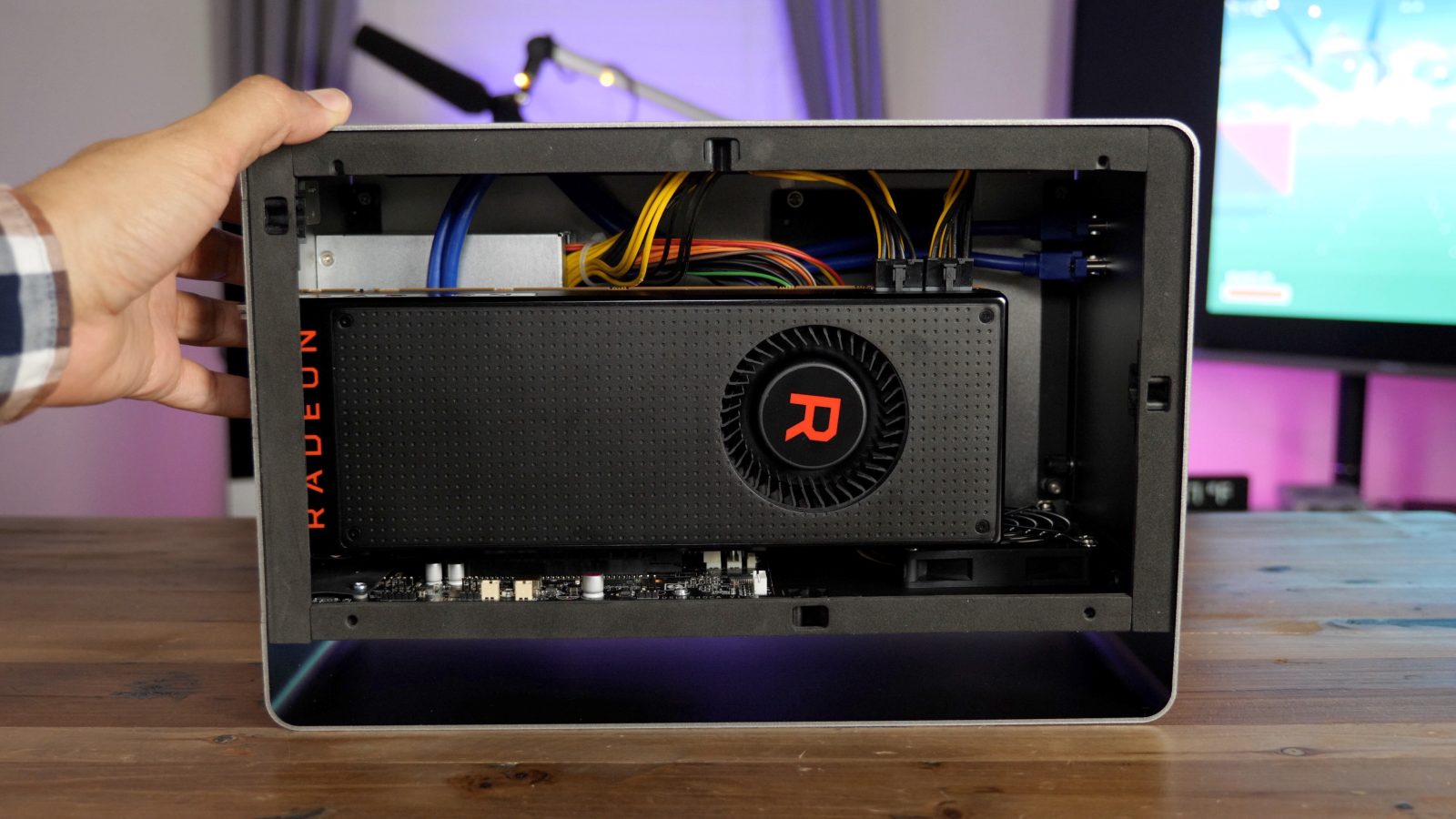 As Apple gets closer to its self-imposed spring 2018 deadline for officially adding external GPU support to macOS, each beta seems to increase the stability of external GPU connections. We recently put the fifth and latest version of the macOS 10.13.4 beta to the test. Using a Mantiz Venus external GPU box plus a Radeon RX Vega 64, we performed the usual round of benchmark tests and general usage to see how things are shaping up.

As far as performance is concerned, the experience is very much like previous betas. In fact, performance has basically remained right in line with previous tests of macOS with the Vega 64.

Stability, on the other hand, is noticeably improved. Hot plugging the GPU connects in a matter of seconds, and disconnecting the GPU via the menu bar Eject option is just as fast. macOS now identifies the GPU being used in the eject dialog instead of just saying “eject GPU” like it did in previous versions.

If you pull out the Thunderbolt 3 cable, macOS will provide you with a warning message that the eGPU has been improperly disconnected, similar to what happens when disconnecting an external drive without dismounting first.

Another point of note has to do with Final Cut Pro X stability. Although in my experience the app isn’t yet taking full advantage of the eGPU setup for performance gains, overall stability with Final Cut Pro X is better than before. During my usage, the app launched like normal on the external display connected to the eGPU, and remained stable as I edited a video on the timeline. Unfortunately, macOS continued to rely on my MacBook Pro’s significantly inferior Intel Iris Plus Graphics 640 iGPU to do the heavy lifting.

Closed-clamshell mode also works very well, allowing MacBook Pro users to keep the computer closed while using an external display driven by an eGPU. Since the eGPU takes a significant load off of the MacBook Pro’s iGPU, closed-clamshell mode should play nicer than it normally would from a thermal standpoint.

One downside of the update, as noted by the enthusiasts over at eGPU.io, is the apparent disabling of unofficial Thunderbolt 2 eGPU support. We may see an unofficial workaround in the future, but only Thunderbolt 3-enabled eGPUs, like the Akitio Node, Akitio Node Pro, and Sonnet eGFX Breakaway Box are officially supported in macOS.

The state of the eGPU in macOS still isn’t quite there yet, but this latest update continues the trend of incremental improvement. Benchmarks like Unigine Heaven showcase consistent performance gains that will translate into real results when playing games on a device like the underpowered 13-inch MacBook Pro. 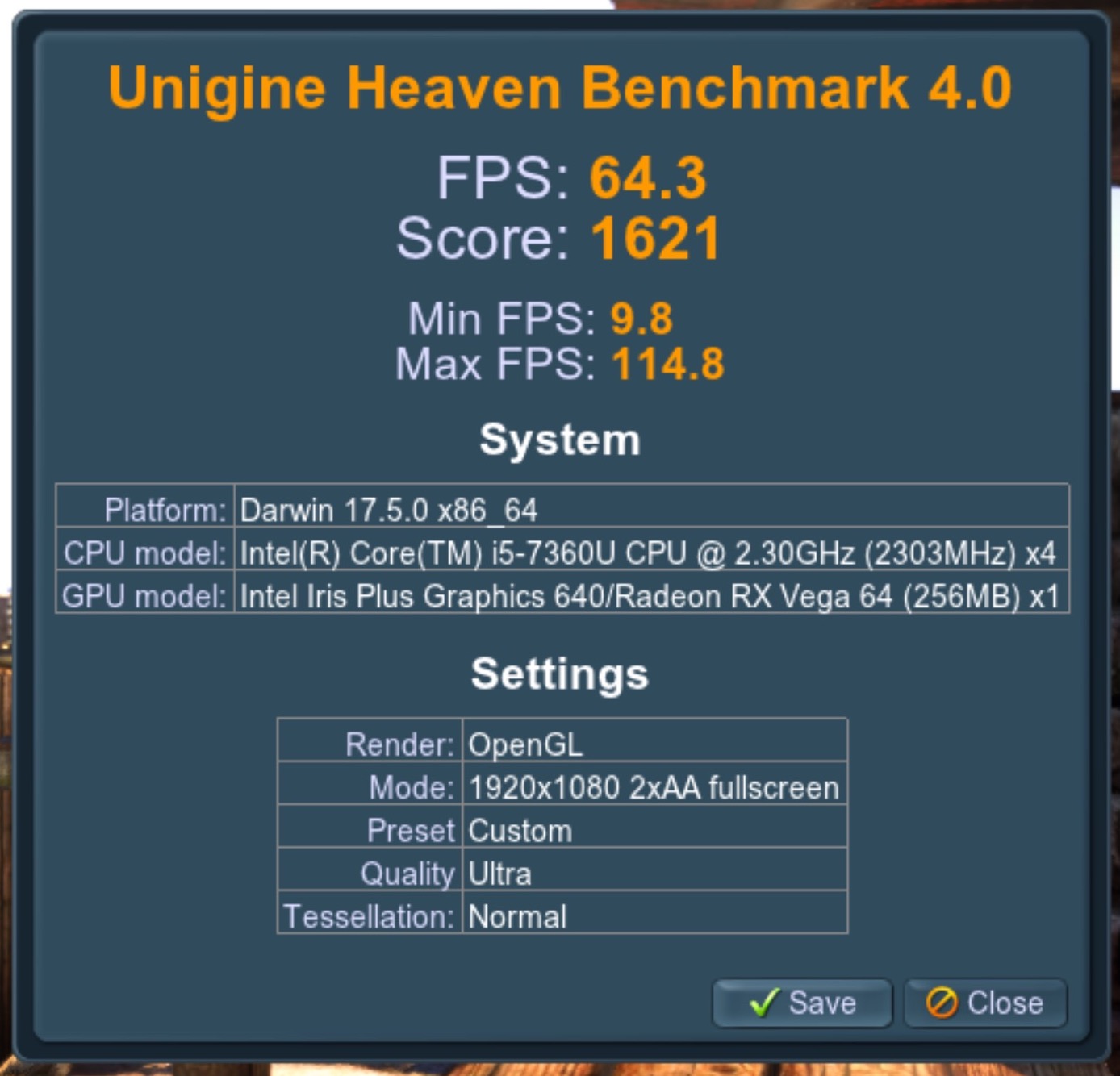 The sheer stability of eGPU setups on the latest beta version of macOS paints a promising picture that official support will be launching sooner than later. If Apple can just improve performance and allow users to drive the internal display with an eGPU, it will make the idea of ponying up for such a solution all the more palatable.

Will you consider using an eGPU in the future?