HomeKit Weekly is a new series focused on smart home accessories, automation tips and tricks, and everything to do with Apple’s smart home framework.

In our third installment of HomeKit Weekly, we’re going to explore how to make HomeKit-enabled sensors more useful through automation in Apple’s Home app. 9to5Mac has also teamed up with FIBARO to offer a HomeKit bundle giveaway, so this week we’ll highlight ways to put those products to work.

Before setting up an automation, you will need to have at least one of three devices: a HomePod, an Apple TV 4 or Apple TV 4K, or an iPad that stays at home and powered.

Creating a new automation with a sensor starts like any other automation in HomeKit. Launch the Home app on the iPhone, iPad, or iPod touch, then look for the Automation tab. Once your HomeKit hub is in place, you will be able to add new automations here with the + button in the top right corner.

When creating a new automation, the Home app offers five event options for triggering the automation. For automations enabled by sensors, you will want to tap the ‘A Sensor Detects Something’ option to reveal HomeKit sensors that you’ve added to your Home app.

After selecting this option, the Home app will show you each available HomeKit sensor by room name and sensor name. Tap the sensor that you want to use for the automation to continue. 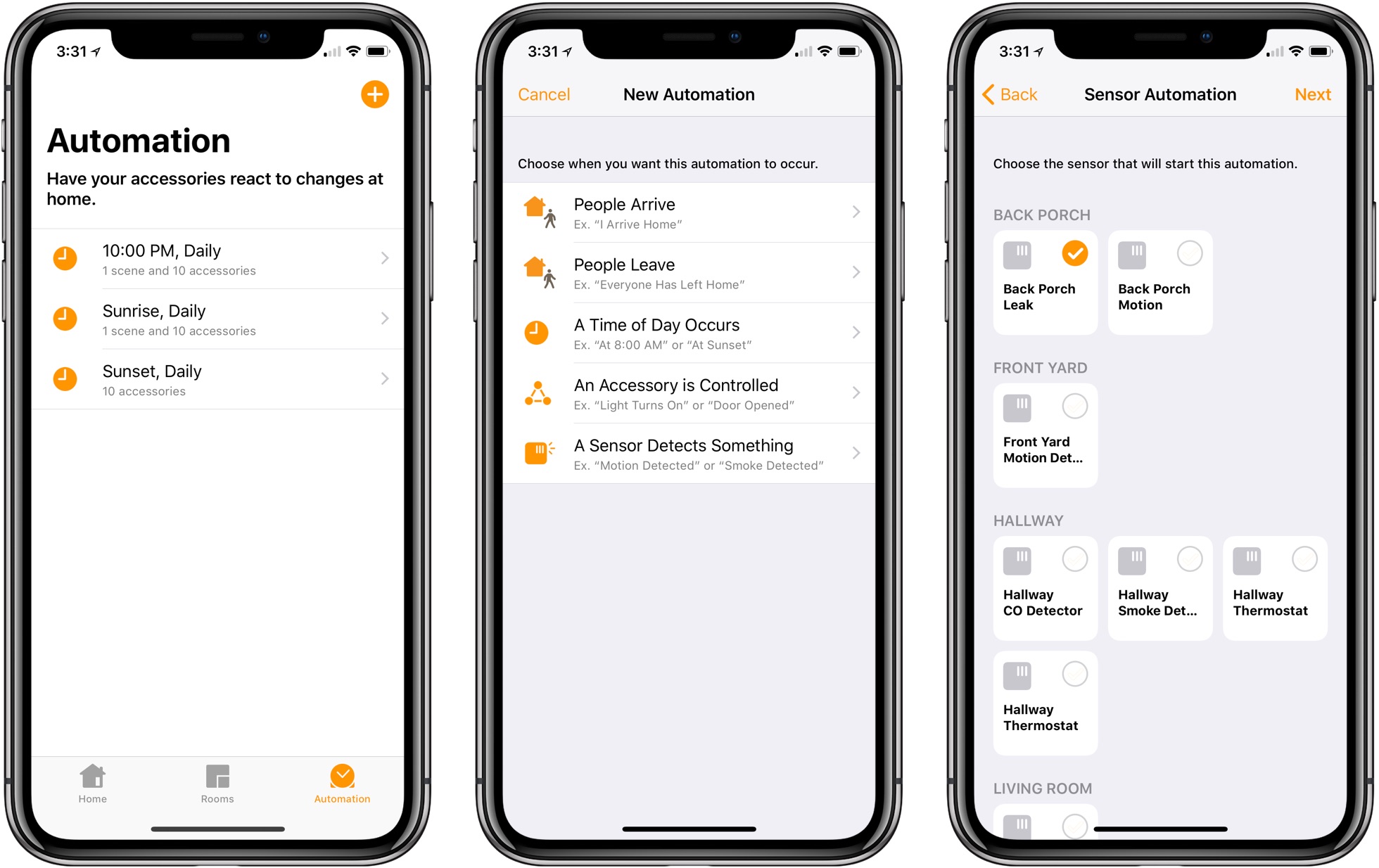 In this example, we’re using the Fibaro Flood Sensor as the trigger for the automation. The sensor is located on the floor of my indoor back porch where I’ve been battling an ongoing leak. I suspect the leak is related to the master bathroom shower, so I want to have the HomeKit-connected lights in my bathroom react when the leak occurs. This will signal to me when the leak has occurred without relying on an alert from my iPhone.

After selecting the Back Porch Leak sensor in the Home app, the next step is to select which HomeKit accessories that you want to react to the trigger. I’ve selected both the ceiling and vanity lights in my master bathroom. The next step is specifying what you want the accessory to do — in this case HomeKit lights.

Lights can turn on, off, change colors if available, and adjust to specific brightness levels. In this case, these lights do not change colors and the bathroom light will already be on. I also don’t want the lights to turn off while I’m using them, so I’ve selected setting the brightness to 80% to create a visual signal. From here, you can test the automation to see the lights dim as if a leak were detected, or tap Done in the top right corner to save the automation. 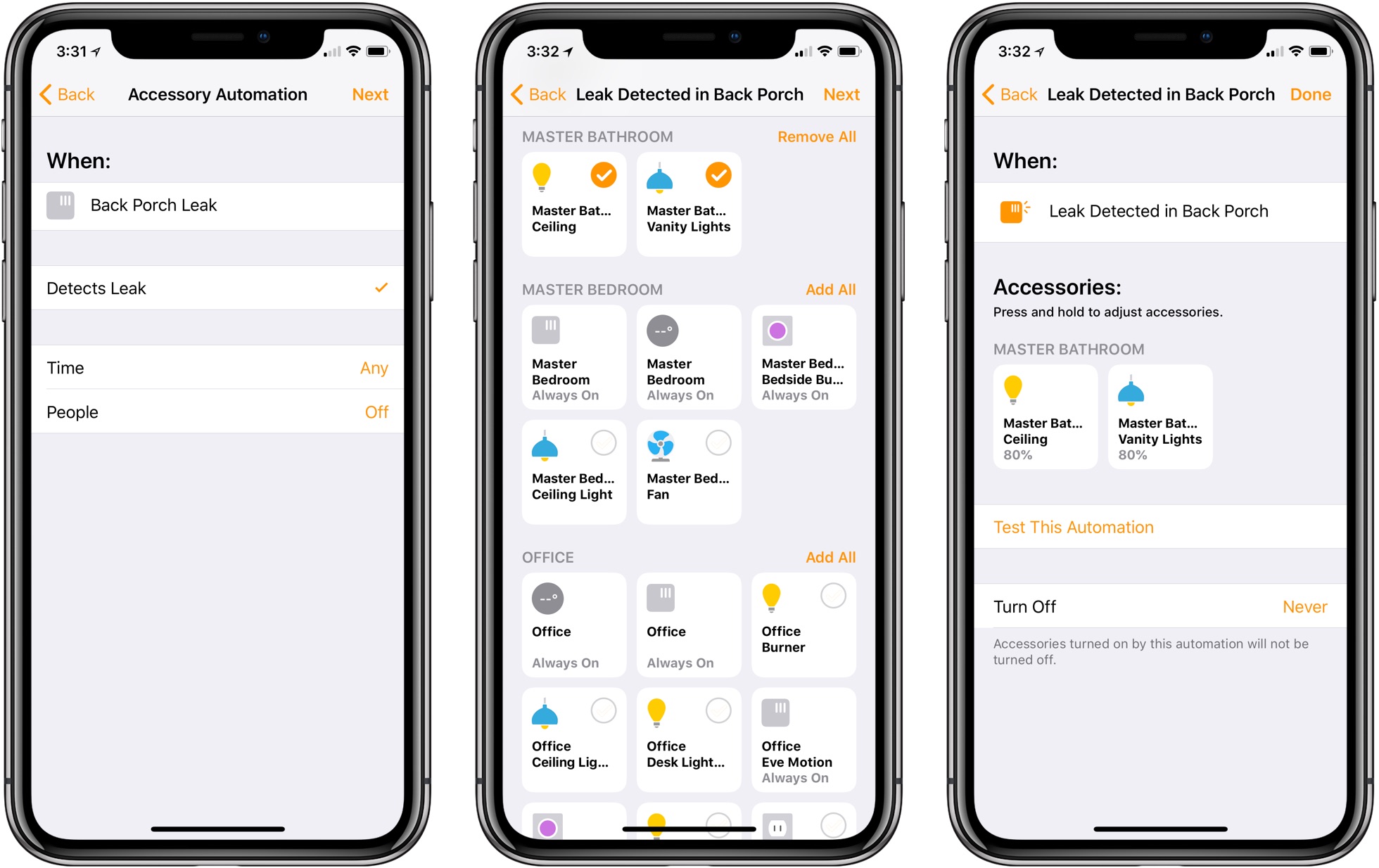 HomeKit sensors can also be used to automatically set scenes when triggered. Scenes are groups of actions like turning off multiple lights in different rooms or controlling various types of accessories with one pre-set command.

Scenes can be triggered manually using the Home app or with Siri, and automation lets you automatically enable scenes with other triggers. In our example, we’re going to turn on various lights around the house with the Good Morning scene when motion is detected. Fibaro Motion Sensor can be used for this automation.

During the day specifically means between sunrise and sunset, and these values can be offset by as much as one hour before or after each event. When I am home is based on my iPhone location as I’m the primary user who manages the Home configuration. 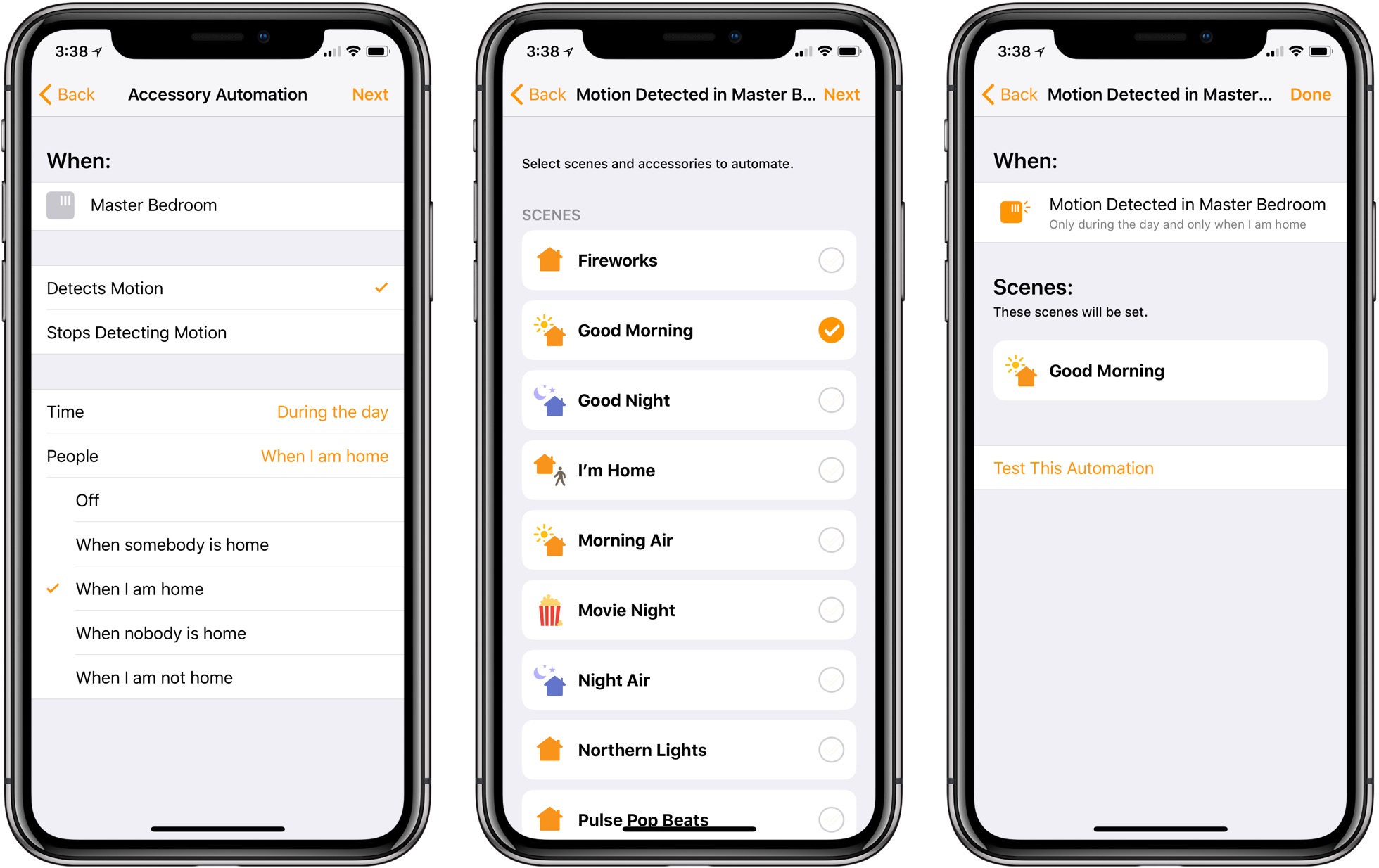 Another use case for motion sensors is turning on lights when motion is detected, but only if it’s dark based on time of day. This can work with a motion sensor, or Fibaro Door/Window Sensor can make opening the door to a room at night a trigger. In our example, we’re choosing ‘Detects Motion’ and specifying ‘At night’ as the time.

We’re also selecting the specific lights that we want to control with this sensor trigger, but adding another rule: turn off after 60 minutes. This value can range for several minutes to up to an hour with lights automatically turning back off if no motion is detected after the time limit is up. 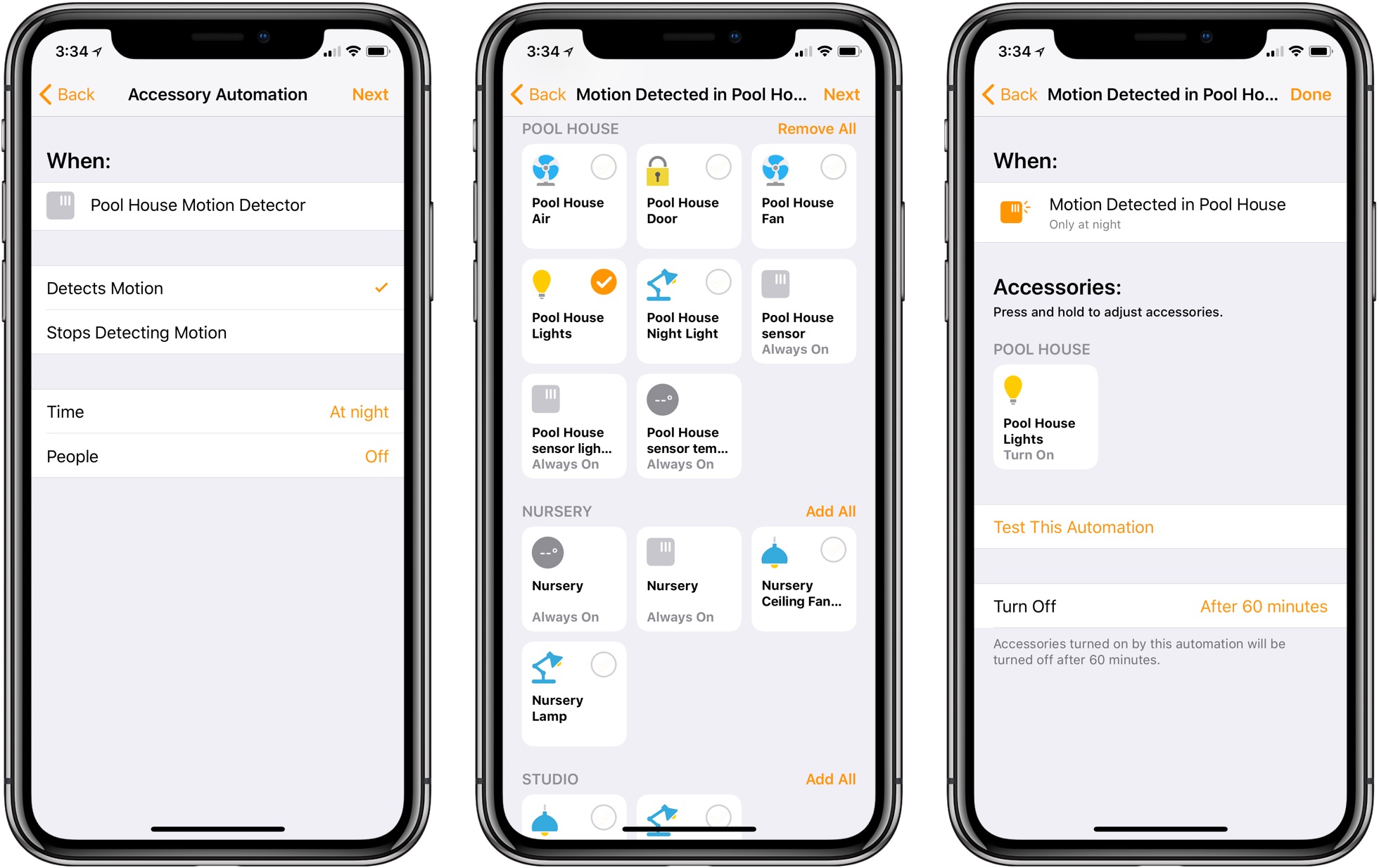 Last up is one of my favorite automations: turning off the lights and ceiling fan in an empty room. After creating a new sensor automation with a motion sensor, we’re selecting ‘Stops Detecting Motion’ as the trigger. We’re also specifying ‘During the day’ as the time for this automation to be available, and including ‘When somebody is home’ for good measure.

Now both the HomeKit-enabled lights and fan will turn off if no one is in the master bedroom between sunrise and sunset. This prevents lighting a room in daylight or cooling an empty room — and prevents you from discovering that someone else in the house forgot to turn off the light and fan … again. 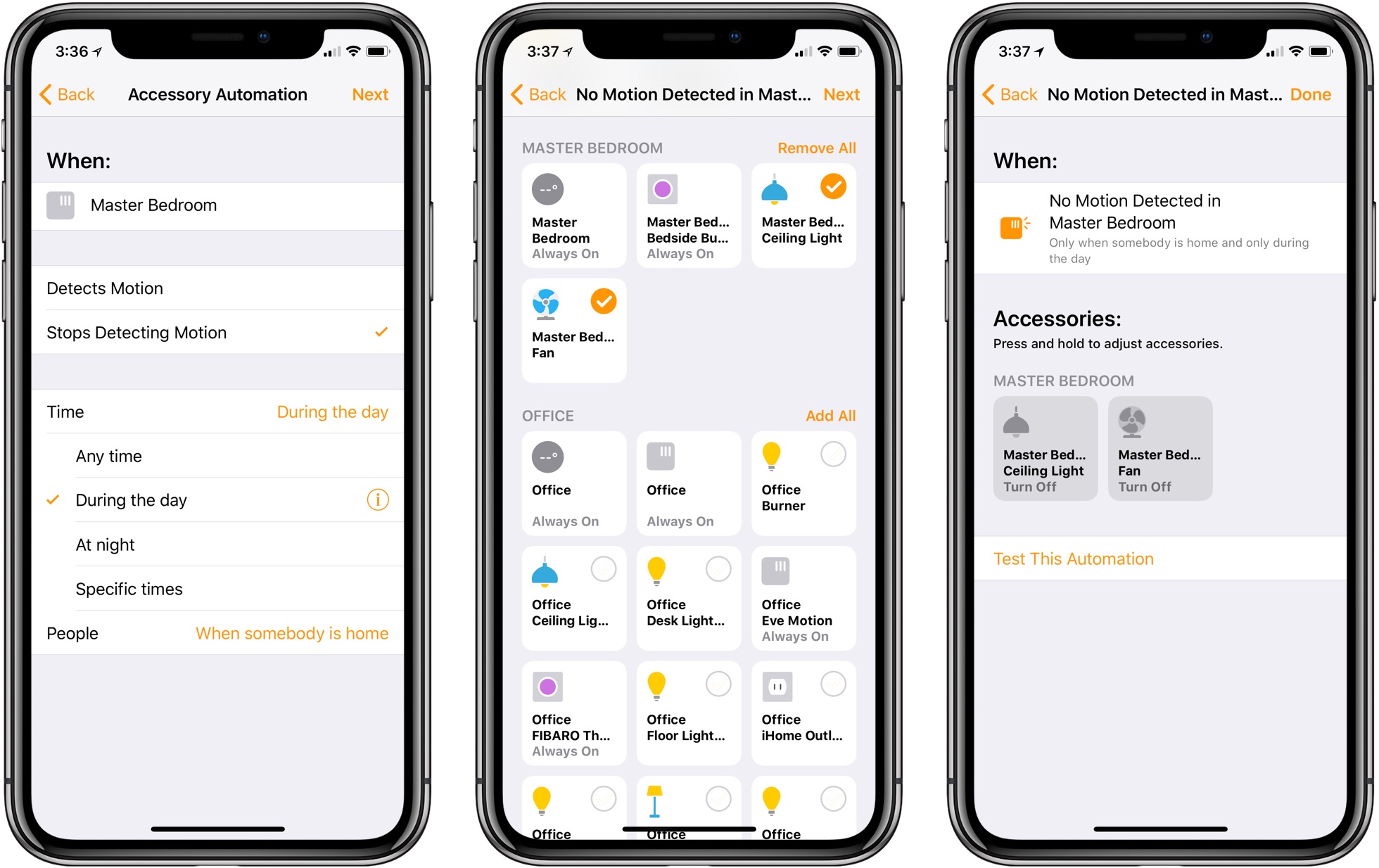 HomeKit sensors can be affordable and fun ways to explore your smart home hobby, and using automation to put sensors to work gives them way more purpose. Without creating automations, sensors tend to just offer alerts when changes are detected, but making sensors control other accessories in ways that take steps out of your routine can save you time and energy.

In addition to flood, motion, and door/window sensors, 9to5Mac’s HomeKit bundle giveaway also includes FIBARO‘s new HomeKit version of The Button — which is available for pre-order now and we checked out over the weekend.

Stay tuned for the next installment of HomeKit Weekly next Wednesday, and catch up on the first two entries below: