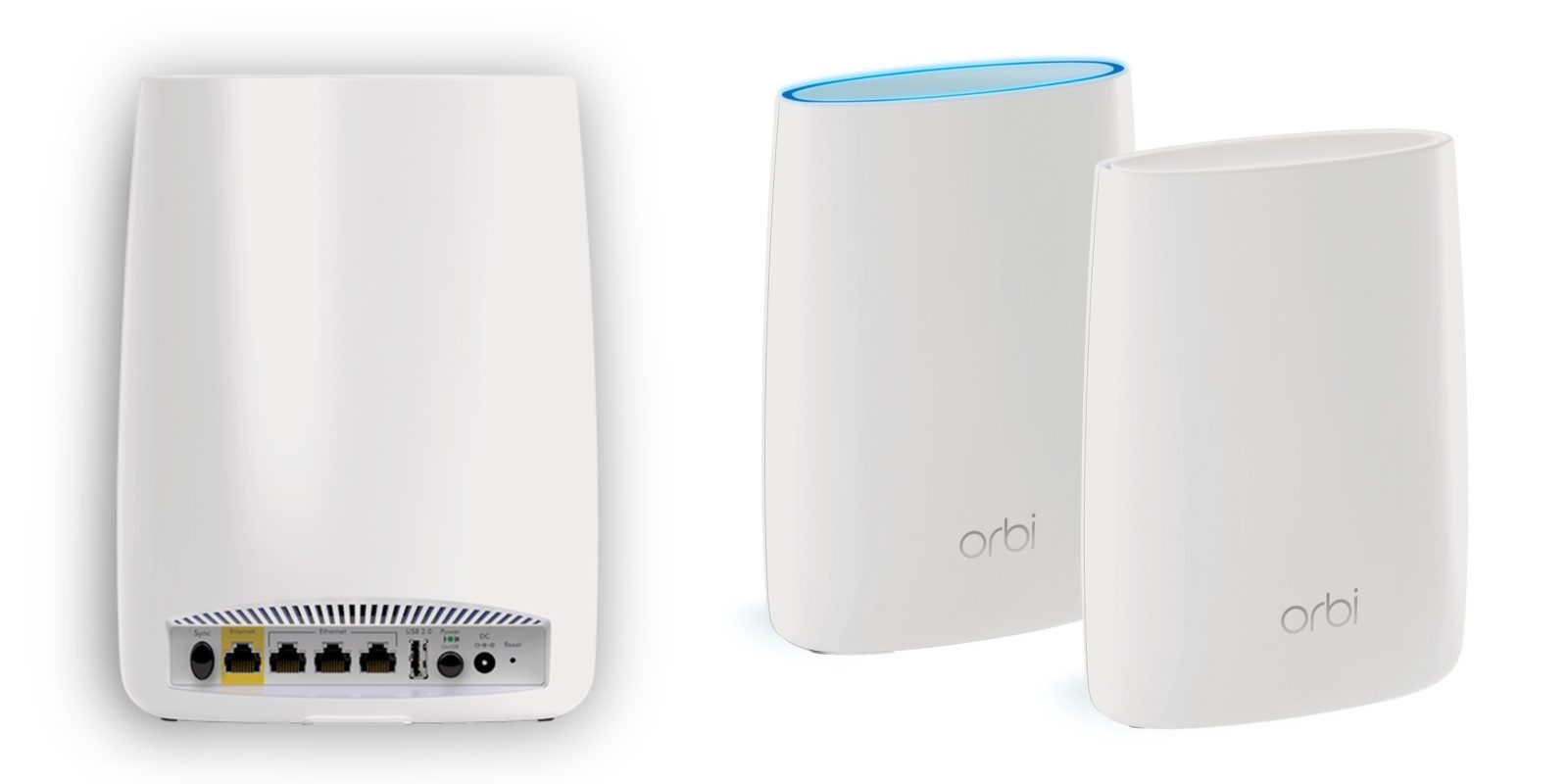 Historically, I have flitted between many different routers. I used AirPort Extreme for a while, and then a variety of third-party options. A couple of years ago, mesh WiFi became a popular buzzword. I kind of passed it over, thinking it was more of a marketing gimmick, but I recently got the chance to review one such mesh WiFi system.

I was pleasantly surprised with how good it was. Read on for my my hands-on with the Netgear Orbi mesh WiFi system.

A WiFi router is best placed in a central location in the home with no obstructions around it.

We used to live in a flat. The one router served us well, in the main living areas, kitchen, and bedrooms. Even there, the very edges of the property would not be covered by reliable WiFi. A combination of walls, interference from other devices and applications, and proximity to other networks competing for the same bandwidth all cause range and performance to degrade no matter how good your router’s antennas are.

Now, we live in a two story family house with a fair number of thick walls. Our internet comes into the house at the very front, from the side wall into the downstairs bedroom. This is not ideal location for the network hub but we don’t really have a choice. This is just a reality of the building and the access to the road.

Network performance on the old router was decent on the ground floor and mediocre upstairs. The master bedroom is, of course, diagonally opposite to where the router is situated and therefore suffered the most. Speeds would top out around 20 Mbps in the best case, with usage interrupted from the connection dropping out on phones and iPads. Our home internet will deliver 200 megabit download speeds over Ethernet. The laptop fared better, presumably because its internal antennas are larger and more powerful than the miniaturized iOS devices. Regardless, not ideal.

We have two Apple TVs hooked up to the living and family room televisions. For whatever reason, the Apple TV WiFi reception was always mediocre even for the box that was only adjacent to the room where the router resides. Streaming content from Plex or Now TV or whatever was plagued with stuttering and buffering.

My first attempt at compensating for these black spots was to setup two Powerline devices, which run internet over the electricity lines in the house, essentially creating Ethernet endpoints in any room where you have a plug socket. Because of the hacky approach — after all, power lines were not designed to carry network traffic — Powerline devices offer significantly lower throughput than a real networking solution, but they are incredibly convenient to set up. Most importantly, what I needed was a way to improve the stability of the internet connectivity to the Apple TVs; it didn’t really matter if the speed was degraded as long as it was consistent. The Powerline system worked surprisingly well but obviously has limitations — ideally you’d be able to retain the broadband speeds you pay for wherever you are. 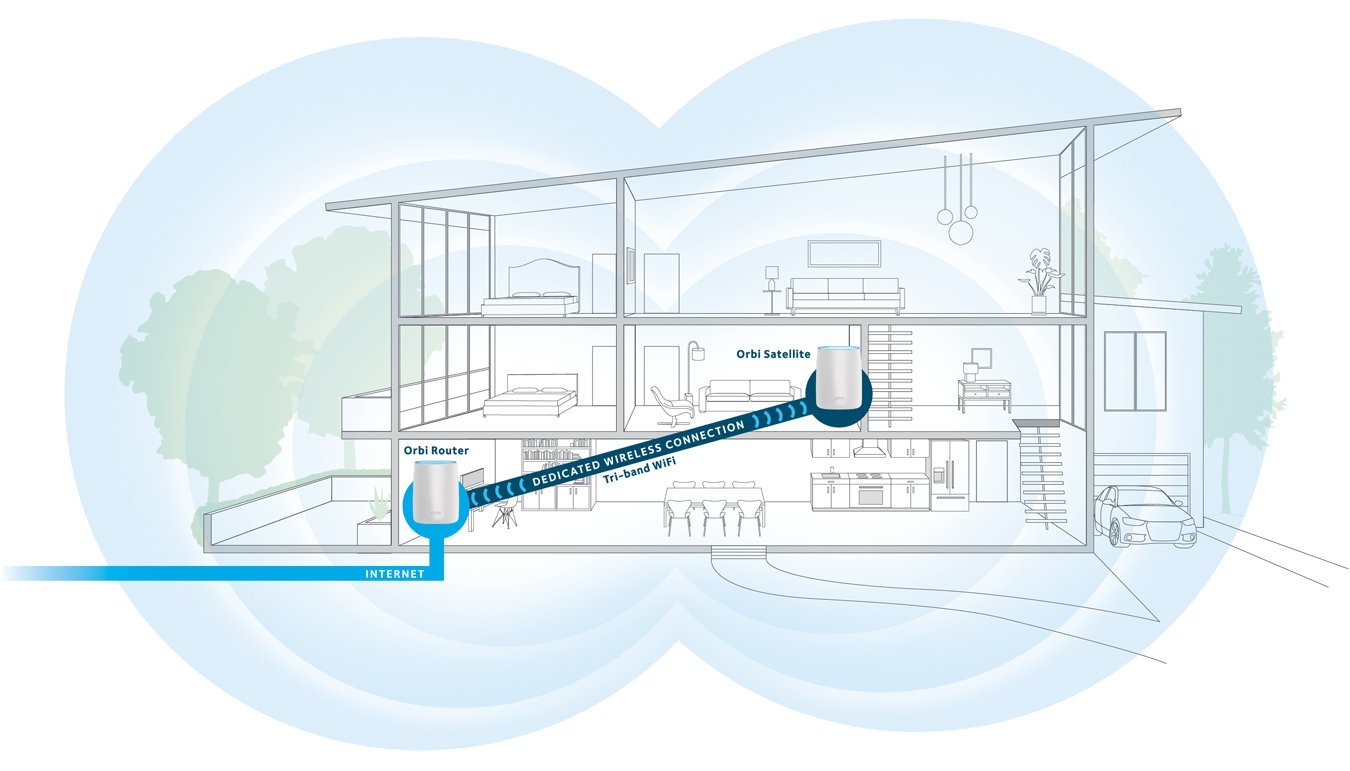 This led me on to trialling a mesh router system. Mesh routers allow you to workaround the problems I enumerated above with placement of a traditional box by having multiple boxes spread out over the home. These mesh systems use dedicated backhaul networks to communicate which helps maintain the speed across bigger distances.

There are several different leading brands, from Eero to Linksys Velop and Netgear Orbi among others. I went with Orbi because I went to a router benchmarking site and they said the Orbi had the best throughput-range performance. It wasn’t a sophisticated buying decision really. I think, in general, all of these systems work out about the same at the end of the day.

One thing I like about the Orbi system I picked out is that the hubs are bigger than mini satellites, but you only need two or three of them. The RBK50 is rated for 5000 square feet. Some of the other systems are based on having lots of mini-hubs spread around your house, recommending one for every two or three rooms. 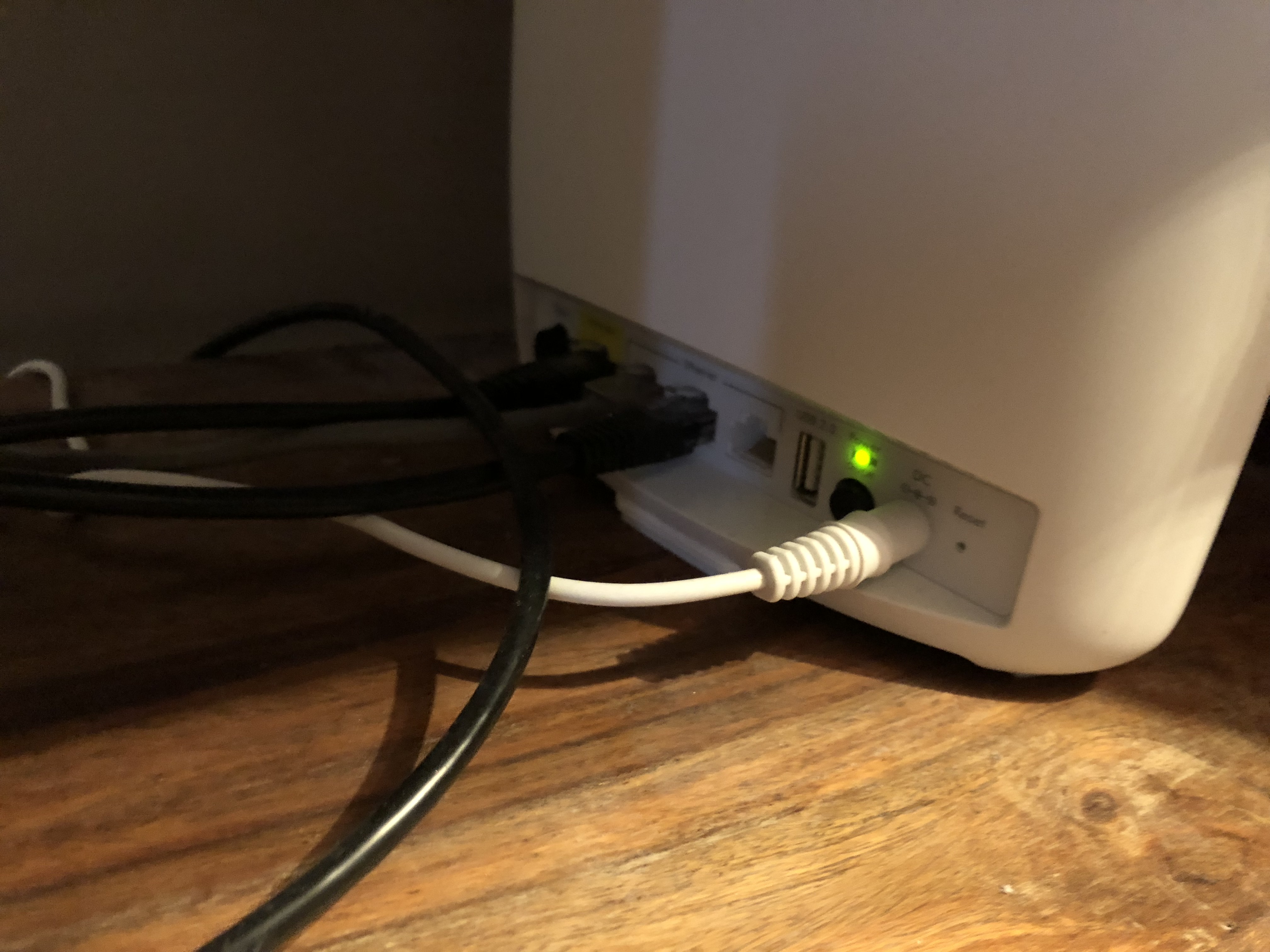 With Orbi, Netgear took a slightly different approach initially relying on fewer, bigger, beefier, routers and satellites. With the original firmware, the Orbi satellites could not talk to each other. The satellites would only communicate with the router on the backhaul channels. This is why most of the Orbi packs only come with one satellite. With Orbi OS 2.0, this policy has now been revised and satellites can talk amongst each other; I did not test this capability as the RBK50 pack only comes with a single satellite.

(Extraordinarily large plots may need more than one satellite, but average medium-large homes should be fine with just the one base station and one station.)

I put the main router in the same place as the old one, in the front-right bedroom where the cable internet comes in, as the ergonomics of the house essentially require it as explained above. I then put the satellite in the diagonally opposite living room on the ground floor. I’ve been using the Orbis for a few months now.

I am happy to report that this configuration works great, for the most part. I wish I would have done this sooner. It really does blanket the house in WiFi. It’s great. Downstairs room can get 150-200 Mbps on speedtest.net and upstairs rooms are not far behind. The lowest speed I’ve seen a device get to is 50 Mbps, about a quarter of the theoretical maximum. More importantly, the connections are always rock solid. No dropouts or dead spots anywhere. 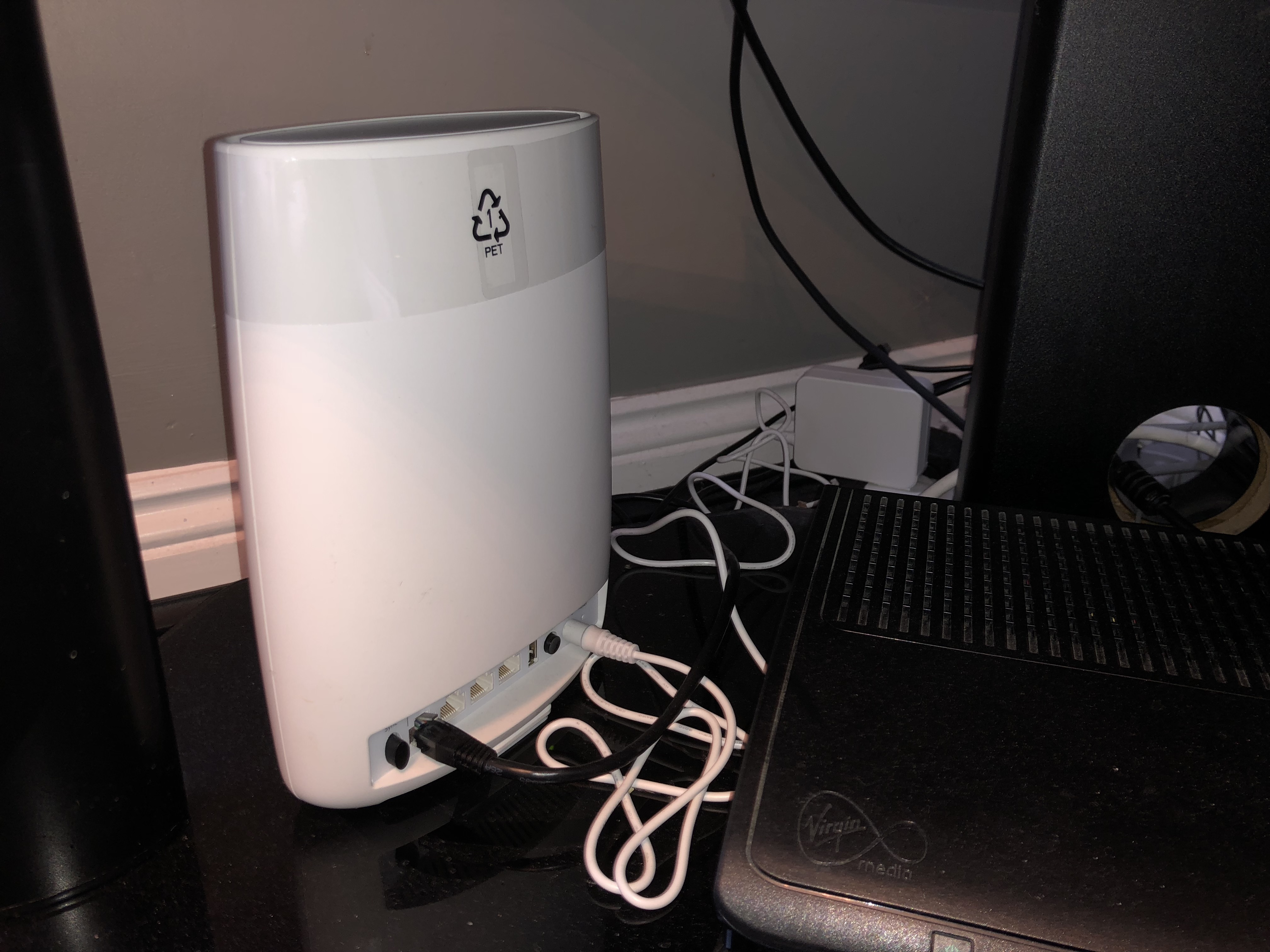 There are three Ethernet ports on the main router, and another three on the satellite. This means if you put your satellite on the TV stand, you can connect games consoles and cable boxes with a physical wire to the wireless satellite. This decreases latency a little and frees up the wireless bandwidth for devices like laptops and iPads. Amusingly, despite my fourth-generation Apple TV sitting next to the Orbi in the television cabinet, I connect via WiFi, not the Ethernet port. Not because of any fault in the Orbi equipment, it’s just the fourth-gen Apple TV only has a 100-megabit Ethernet port. Thankfully, the 2017 model has upgraded to gigabit connectivity.

The only time I’ve seen some weirdness is that the satellite loses connection to the base station temporarily; you can see this because the top of it glows when there is an error. This problem happens rarely, like less than once a week, and always resolve themselves within a minute. Obviously, I’d prefer if this never happened. I think the firmware must have a bug of some kind that causes the devices to reboot occasionally. (Netgear keep pushing out software updates so hopefully this problem will get resolved eventually.)

Here’s the thing. The router is great, it does the job. But you know what? Using the Orbi makes me want an Apple mesh router even more than I did before.

Getting started with the Orbi system is straightforward. You plug them in, you press Next on a few screens with the included app and you are done. There’s a web portal for the router if you don’t want to use an app, or want to setup from a Mac for instance.

After everything is set up, you can use the Orbi app to see what devices are connected, run a speed test, enable a guest network, and adjust some basic settings. For anything more complex, you have to go to the web portal — which has a design straight out of 2002. The iOS app isn’t going to win any awards for excellence. It’s ‘fine’.

You can easily imagine how an Apple approach to mesh WiFi would be superior. You’d be able to set up the system as effortlessly as you can add a HomePod, or pair AirPods. The hypothetical product could send push notifications when the Internet goes down, or allows you to easily blacklist/whitelist connections that seem suspicious. You could revise settings in the WiFi Settings of the Settings app. Perhaps the Apple router would include some onboard solid state storage for iCloud content caching or even Time Machine.

Sadly, these dreams are just that. Apple’s router division is rumored to have been killed off and there hasn’t been new AirPort hardware, of any kind, since 2013. With the absence of anything from Apple, Netgear Orbi is perfectly adequate. Don’t get me wrong. The user interface and experience of the Orbi is about as good as any other of the third-party routers on the market from landing brands. It does the job.

And critically, the core purpose, providing WiFi all over the home is wholly fulfilled. The promise of mesh WiFi is definitely delivered on in this product. I could go never back. Even if there is potential for something even better to exist, it doesn’t yet and this is the happiest I’ve ever been with my home WiFi performance. If you have dead spots with your current home wireless network, seriously consider adopting a mesh solution.

Netgear sells a lot of different Orbi packs. The one I have is the RBK50 ($370), which has one base station and one satellite. There are numerous other models, for larger and smaller properties. Check Netgear’s website for more information.