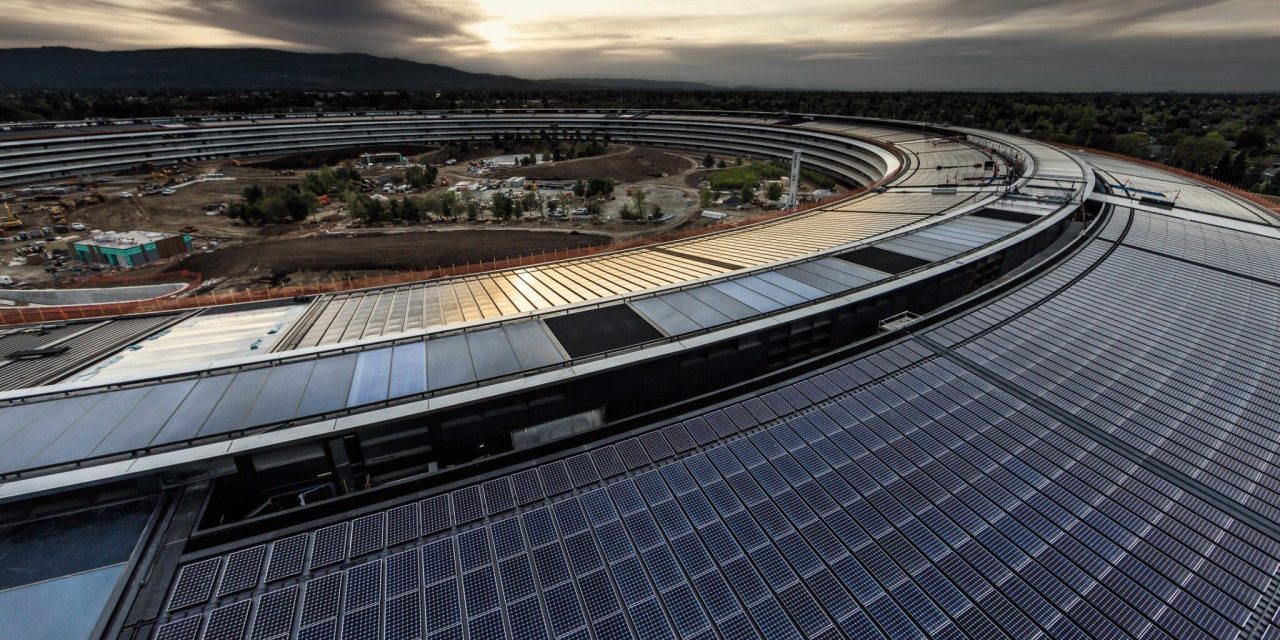 [Update: Apple has shared a press release on its environmental progress and hitting 100% renewable energy.]

Apple has finally hit its goal of running its own operations off 100% renewable energy. All Apple facilities, from Apple Park to its data centers to worldwide fleet of Apple retail stores, are now solely powered by green energy. Last year, it was close at 96%, but now it’s finally hit the magic 100 number.

This figure does not include Apple’s third-party suppliers or manufacturers, although the company is convincing many of those to switch to 100% renewable sources too …

Apple’s environment VP Lisa Jackson discussed the news in an interview with Fast Company. Jackson highlights how Apple has not only focused on reducing emissions but also contributed to the availability of green energy on the grid.

The company has built numerous wind and solar farms in cooperation with local institutions, as well as intense focus on environmental sustainability during development of its new buildings like Apple Park. Its data centers are flanked by fields of solar panels.

Filling out the last 4% required Apple to find renewable energy sources in some of its more remote retail stores and offices. It has signed power purchase agreements in Brazil, India, Israel, Mexico and Turkey.

Here are some of Apple’s latest renewable energy projects:

Apple Park, Apple’s new headquarters in Cupertino, is now the largest LEED Platinum-certified office building in North America. It is powered by 100 percent renewable energy from multiple sources, including a 17-megawatt onsite rooftop solar installation and four megawatts of biogas fuel cells, and controlled by a microgrid with battery storage. It also gives clean energy back to the public grid during periods of low occupancy.

Over 485 megawatts of wind and solar projects have been developed across six provinces of China to address upstream manufacturing emissions.

Apple recently announced plans to build a 400,000-square-foot, state-of-the-art data center in Waukee, Iowa, that will run entirely on renewable energy from day one.

In Prineville, Oregon, the company signed a 200-megawatt power purchase agreement for an Oregon wind farm, the Montague Wind Power Project, set to come online by the end of 2019.

In Japan, Apple is partnering with local solar company Daini Denryoku to install over 300 rooftop solar systems that will generate 18,000 megawatt-hours of clean energy every year — enough to power more than 3,000 Japanese homes.

Apple’s data center in Maiden, North Carolina, is supported by projects that generate 244 million kilowatt-hours of renewable energy per year, which is equivalent to the energy used by 17,906 North Carolina homes.

In Singapore, where land is scarce, Apple adapted and built its renewable energy on 800 rooftops.

Apple is currently constructing two new data centers in Denmark that will run on 100 percent renewable energy from day one.

Being 100% renewable does not mean that every Apple Store is powered by a solar farm, of course. Apple contributes to the power grid in even absolute amounts to what it uses. Unlike some other companies, it does not buy up REC in open market transactions to offset its dirty energy consumption skew the figures. Jackson explains:

Jackson explains that Apple prefers to buy power from renewable energy projects where the company played some role–by either investing capital up front or committing to buying the power produced there for a long time, sometimes decades.

In regard to the supply chain, the story is not as clean. Apple has now announced pledges with 23 of its suppliers to serve Apple operations on 100% renewable energy. This is up from 14 in 2016 and includes names like Finisar and Pegatron, a key iPhone assembler. Apple’s biggest link in the supply chain, Foxconn, has yet to sign up.

There is a long way to go. Apple wants to stop mining rare mineral for its production processes, and has a long-term goal to create a ‘closed loop’. This would see Apple making new products solely out of recycled parts. These initiatives are underway but may be years off coming to fruition.

Apple's VP of Environment, Policy and Social Initiatives @lisapjackson says the company is now globally running on 100% renewable energy, including 23 of its suppliers, and are progressing towards a carbon neutral footprint. #CheddarLIVE pic.twitter.com/HtAq2R03Eh