HomePod Diary: A second one just replaced the Sonos Play 5 in our bedroom 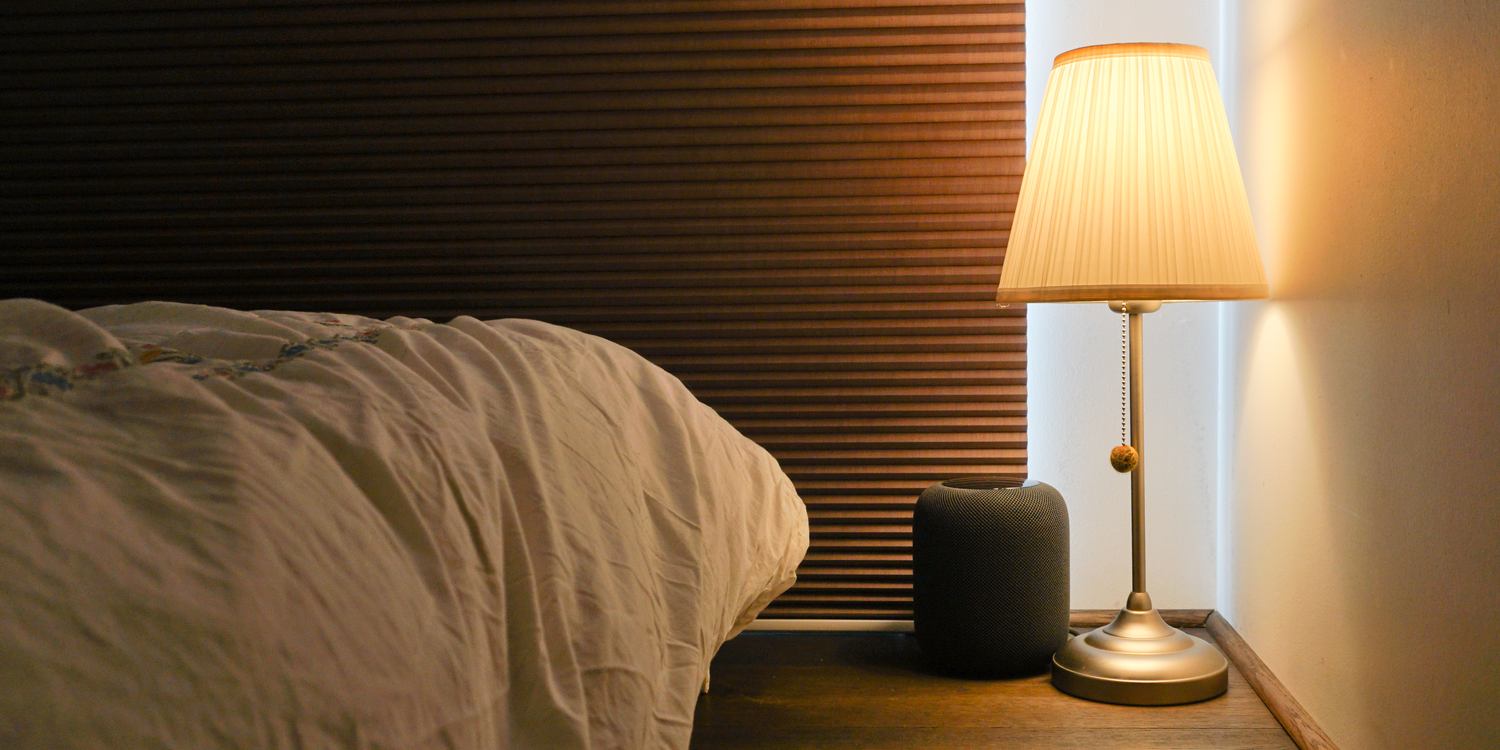 I said back in February that the HomePod is a Sonos Play 5 killer, and I’ve just demonstrated this by buying a second one to replace the Sonos in our bedroom.

I explained then the reasons why I felt that HomePod was the better buy, despite my fondness for Sonos speakers …

I wrote last time that the HomePod had already made the transition from a luxury to a device I wouldn’t want to be without.

That’s partly for the ease and reliability of Siri control of HomeKit devices. While I was happy using my Watch or iPhone to control devices in the home, my partner doesn’t have (or want) a Watch, and doesn’t carry her phone around. For her, then, Siri was a significantly less convenient way to do things like switch lights on and off.

But HomePod rapidly won her over. It easily hears commands from the living room, balcony and kitchen. It can also hear you from elsewhere in the flat if you raise your voice.

That ‘raising of the voice’ from hallway, office or bedroom was one reason a second device was desirable. But if it were just for voice control of smart home devices, an Echo Dot would have done the job for a lot less money.

A second HomePod justified itself because it’s become our go-to music player.

I said before that while HomePod doesn’t compare with true HiFi systems, it is decent quality sound, and the convenience is unbeatable.

Most of us aren’t willing to accept audio quality we perceive to be poor, but when the difference is ‘great’ versus ‘really good,’ then the convenience factor does come into play. And for me, HomePod audio quality ticks the ‘really good’ box in exactly the way the Sonos Play 5 did.

It’s not B&O. It’s not Naim. But the sound quality is really good. Good enough that I’ve been perfectly happy with it for casual and background listening.

And that, in truth, is most of my music listening these days. There are still times when I really want to immerse myself in music, and that’s when the difference between ‘really good’ and ‘great’ makes itself heard. But the rest of the time, the difference doesn’t interfere with my enjoyment of the music.

Six weeks on, that’s even more true today. And one other factor came into play: one of my B&O speakers developed a fault. Normally, that would have been a first-world emergency. I’d have rushed it off to the dealer for repair within days. I listen to music all the time, and wouldn’t have wanted to be without my B&O system for a day longer than necessary.

But with HomePod to pick up the slack, I still haven’t gotten around to taking the speaker in for repair. It’s not a full replacement, but I’ve actually been satisfied with the ‘really good’ quality it offers. And since the winter garden (glazed balcony) is where we spend most of our time in the evening, the HomePod also pumps out enough volume for the relatively small space. I do, though, miss stereo – of which more in a moment.

With HomePod having become our de-facto primary music system, that increased my desire to enjoy the same convenience in the bedroom – of simply being able to tell the speaker what to play, instead of having to use an app. And, to my surprise, Steph didn’t need any convincing: she too was hooked on the simplicity and efficiency of Siri-controlled music.

A set up complication

I said before that the set up process was beautifully simple, and once again I was up-and-running in a minute or two.

There was, however, one complication this time around. Regular readers will be familiar with my aversion to visible wires. When we had the platform floor built in the winter garden, I asked for lifting slats to be fitted to allow plugs to be fed beneath the floorboards. The bedroom setup, though, is a little different. 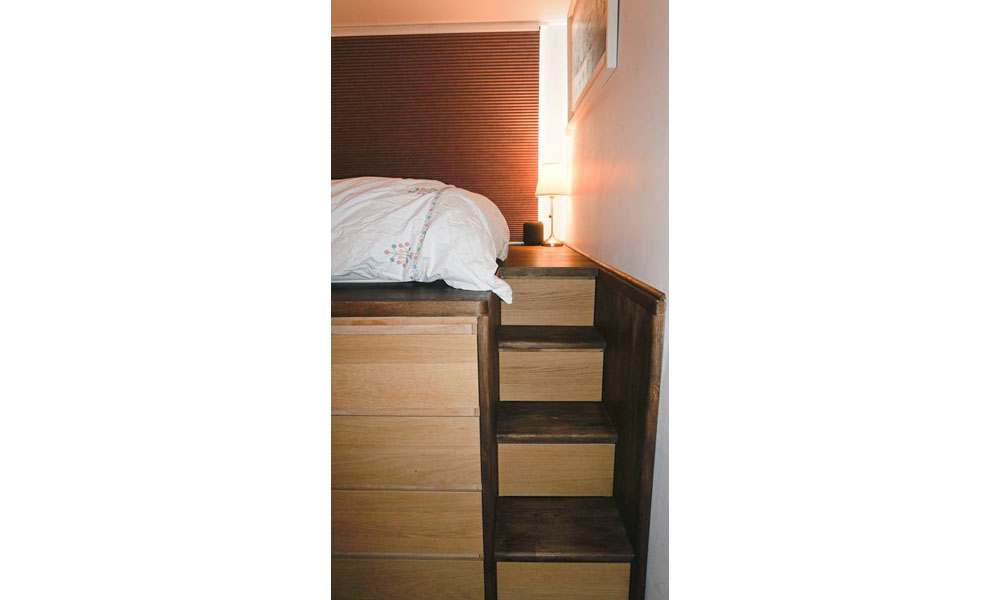 The mattress sits on a raised platform created for two reasons. Mostly, it creates a large storage area beneath – and it also brings the bed level with the window, allowing us to enjoy the view while sitting up in bed. Since we don’t expect to be moving electrical items around very often, we opted to simply have a few small holes for cables, for wires to pass through to the power sockets located beneath the platform.

The Sonos speaker lived at the foot of the bed, with a small cable hole used for that and a table-lamp. The Sonos had a figure-of-eight cable, so we simply passed that up through the hole from underneath. With the table lamp, we removed the plug, passed the cable through and then rewired it.

But the HomePod has a sealed plug, and the other end of the power cable is, in principle, not user-removable. However, it can be done, as we demonstrated back in February. I cringed while watching the video at the time, but gritted my teeth and did it.

Fortunately, it didn’t seem too dramatic. A firm pull saw the cable pop off, and it snapped easily back into place once I’d fed the cable through the platform. It’s not something I’d want to be doing on a regular basis, but now that it’s in place, that should be it.

I’m still waiting impatiently for Apple to enable stereo pairing. Once that’s available, I’ll test how well that works. Normally, I’d move the bedroom HomePod to the winter garden to test it, but given that I don’t want to repeat the cable-removal process, I think I’ll simply take advantage of Apple’s risk-free trial to order a third one to try it out.

Steph isn’t overly keen on the BeoLab 6000 speakers sitting in the winter garden, so if two stereo-paired HomePods deliver decent performance, then the B&O system will be relocated to the living-room.

So, that’s my update. Two HomePods so far, and a third one to be ordered (at least provisionally) once stereo-pairing is available. How about you guys? Anyone else bought more than one? Please take our poll, and either way let us know in the comments how you’re getting on with yours. As both stereo pairing and multi-room playing could prompt additional purchases, the poll allows you to choose more than one option.