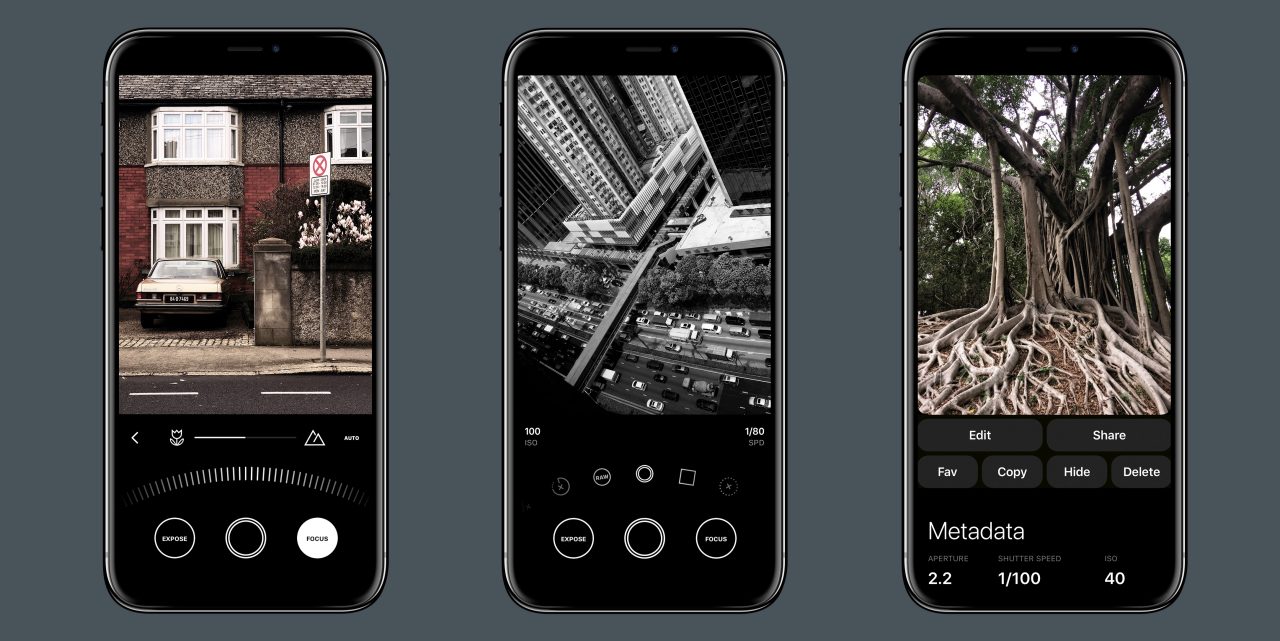 The alternative camera app market has been heating up lately. Apple’s stock Camera app is great for the average person, but intentionally hides away advanced options like manual controls for ISO and shutter speed. Also, on iPhone X, the Camera app doesn’t quite fit in with lots of unused blank space and a hard-to-reach top toolbar.

Obscura 2 is a worthy contender in the pro camera app market, launching today in the App Store ($4.99). The main screen incorporates all controls into a bottom third of the screen, easily accessible when using the iPhone one-handed. There are dedicated buttons for common actions of changing exposure and focus, and a simple ‘control wheel’ dial houses the rest of the controls. Obscura includes a rich set of filters, gestures and a beautifully integrated photo library browser.

The navigational interface of Obscura is well-considered. You can access all camera controls with just your thumb, leaving most of the display to the viewfinder. The dial is a clever user interface element to pack in a lot of disparate settings into a small space; you scroll through filters, zoom mode, grid overlays, flash options, timer controls, file formats and more with this single piece of UI.

Exposure, focus, shutter speed and ISO options are given top billing with permanent buttons on the left and right side of the screen. Tapping on either of these swaps out the main dial for a custom slider to adjust the relevant values. All app chrome is a black, white and dark gray monochrome theme which looks really great on the iPhone X OLED display.

The dial UI is an interesting approach to a hard problem. The concept is sound and it really does keep everything you need in reach of your thumb, enabling one-handed operation. It isn’t perfect, the momentum physics of the dial sometimes make it hard to precisely select a particular option, with the dial inexplicably flicking across to the next item in the list than the one you wanted to stop on. I think some code tweaks to dampen the scrolling response when making fine, precise, changes would go a long way to answering this niggle. 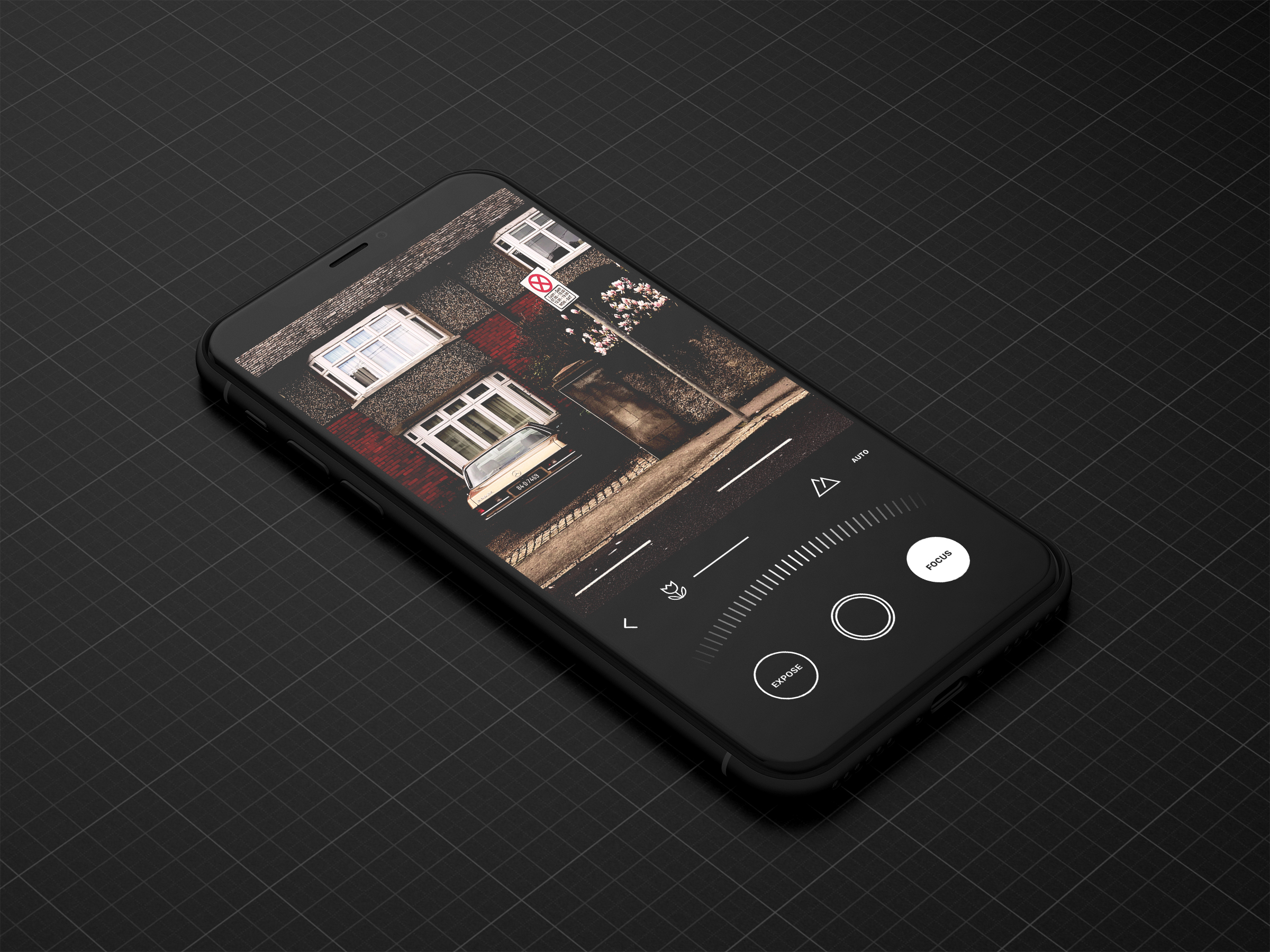 One other complaint: on iPhone X, the ears of the notch are always left blank; the viewfinder cuts off below it. This feels like a waste to me, putting some non-interactive status controls in those spaces would make sense to me, something Halide has led the way with.

One of my favorite features of Obscura is the Spirit Level. To help line up shots with the horizon, enabling the Spirit Level puts a semi-transparent line on the screen which uses the device accelerometer to show how much the phone is tilted. This line expands to fill the width of the display when the device is straight, so you know you are taking a shot that isn’t wonky. Pro users will like the ability to save images in multiple formats simultaneously; you can shoot RAW + HEIC for example.

The one-handed interaction model continues to the library. You can go from the viewfinder to the library just by swiping down, and a gallery of your photos slides into view. There’s a button bar above which lets you filter by media type or album. The design of the buttons feels inspired by the Apple Watch interface, with subtle platters that enlarge when you press down. By default, Obscura liberally deploys haptics for almost everything you can touch. It’s a cool gimmick but it quickly got on my nerves; thankfully there is a toggle to disable them.

Tapping on an image in the library reveals some simple editing and sharing options, as well as a detailed waterfall of metadata below. You can see all the technical EXIF information attached to every photo, including what device it was taken on, focal length, and aperture configuration. Lat/long coordinates are displayed — the developer says a visual map view is coming in a future update.

Befitting its status as an advanced camera app, Obscura has a lot of settings to customize the experience. You can set the control wheel to automatically open and close when you hover over a function for example; this is a really useful speedup once you get to grips with how the UI works.

You can choose what action to perform when you press the volume button, from taking a photo to locking exposure. There are viewfinder shortcut gestures too, again customizable in the settings. You can even pick display options like how many photos per row to show in the library view, and whether to hide screenshots and hidden images altogether (something Apple should steal for its stock Photos app).

In the future, Obscura promises to add an Apple Watch remote viewfinder mode, white balance controls, and more. I think the biggest omission for the 1.0 is lack of support for Portrait mode bokeh blur. You can choose to capture the depth map when taking a photo, but Obscura doesn’t know what to do with it. Luckily, Portrait Mode is also promised to be in development.

The biggest barrier to using alternative Camera apps continues to be the iOS system’s lack of support for choosing default apps. Ideally, you’d be able to get to Obscura by pressing the camera shortcut button on the iPhone X lock screen, or from Control Center.

Abandoning the stock app is not easy, but there’s a reason that this niche category of alternative apps exist: they appeal to photographers who use iPhones, not merely people wanting to take pictures. If you are interested in the nitty-gritty, finely adjusting exposure and ISO regularly, Obscura is a great option. Perhaps you just keep it on your phone for those moments when the Apple Camera automatic algorithms don’t quite cut it.

The app is on sale now for $4.99. There are a couple of additional filter packs which can be purchased for $2 each, adding a handful more of artistic black/white and analogue film effect filters.

There are 19 filters included as standard, so these purchases should definitely be seen as optional extras rather than mandatory upgrades. There’s a Sepia filter pack which can be unlocked by sharing Obscura with friends using the share sheet.

Find out more about Obscura 2 on the developer’s website.