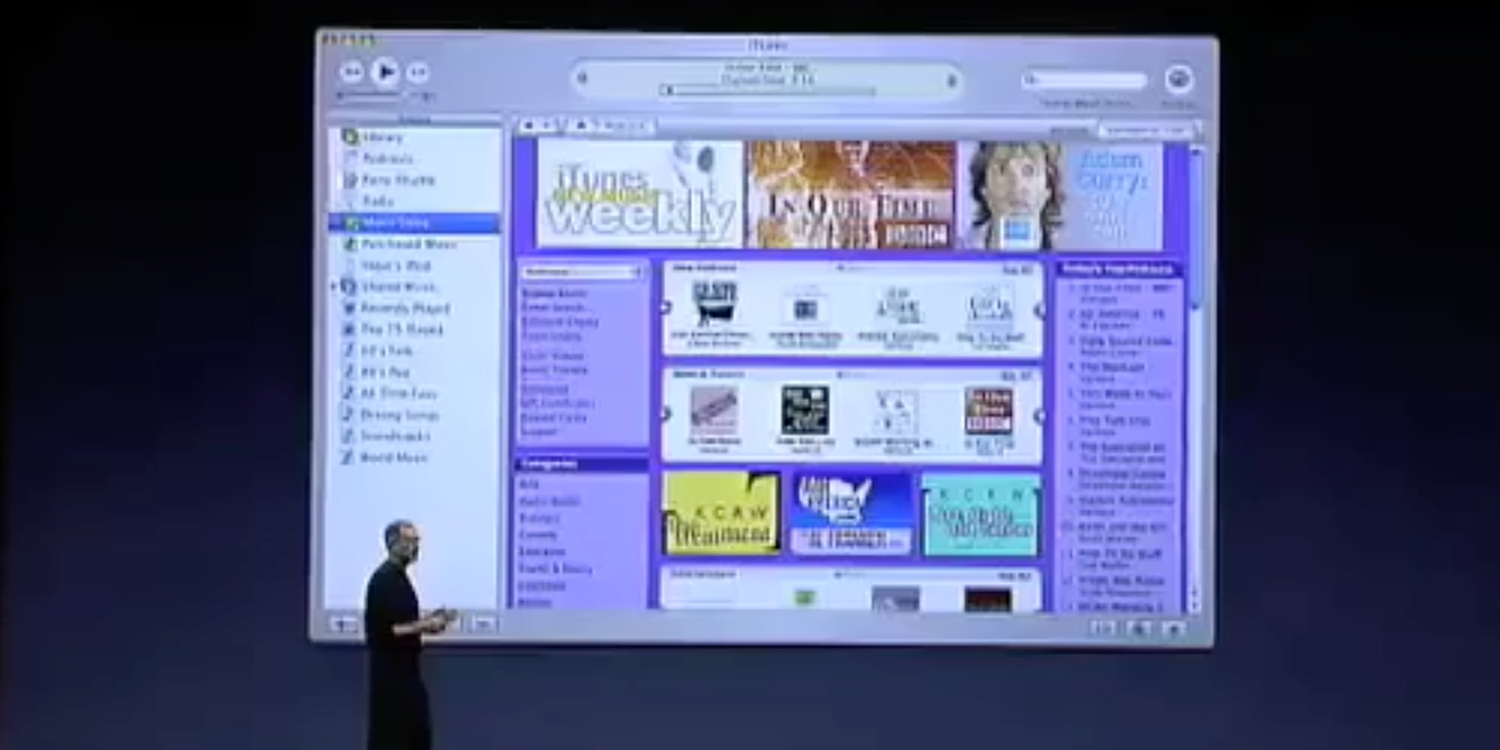 June 28th, 2005 might go down as one of the biggest days in the history of media. It was the day Apple announced they were taking podcasting mainstream by including support for Podcasts in iTunes 4.9 and with syncing to the iPod. As rumors continue to swirl of iTunes being dismantled on macOS (in favor of dedicated apps), I thought it might be fun to take a look back at this important decision.

Apple® today announced it is taking Podcasting mainstream by building everything users need to discover, subscribe, manage and listen to Podcasts right into iTunes® 4.9, the latest version of its award winning digital music software and online music store. iTunes users can now easily subscribe to over 3,000 free Podcasts and have each new episode automatically delivered over the Internet to their computer and iPod®.

“Apple is taking Podcasting mainstream by building it right into iTunes,” said Steve Jobs, Apple’s CEO. “Podcasting is the next generation of radio, and users can now subscribe to over 3,000 free Podcasts and have each new episode automatically delivered over the Internet to their computer and iPod.”

The new Podcast Directory in iTunes 4.9 features over 3,000 free audio programs, making it one of the largest Podcast directories in the world, with favorites such as ABC News, Adam Curry, BBC, Clear Channel, The Dawn and Drew Show, Disney, Engadget, ESPN, Newsweek and NPR member stations such as KCRW in Los Angeles and WGBH in Boston.

For podcast fans that have only ever used iPhone apps to download podcasts, you have no idea the lengths we used to go to get our shows. This was also at a time when only a small percentage of homes in the US had broadband (so downloading shows could be time-consuming).

In late 2003, Adam Curry released a solution called RSS2iPod that made it easy to load his Daily Source Code show onto your iPod.

Mac users can use this folder applescript to automagically update your iPod with any new mp3’s that are downloaded to your Radio UserLand enclosures folder from enclosure aware RSS feeds.

If 2004 was the introduction to podcasts, 2005 was the year it was going mainstream. By building the iTunes Podcast directly, they changed the future of media. iTunes allowed anyone with an iPod to easily find, subscribe, and listen to thousands of shows. This was two years before the iPhone launched.

It wasn’t until 2012 that they launched the Apple Podcasts app for iPhone — podcasts were synced to the iPod app before this — and countless third-party apps filled the gap in the meantime. I’ve used almost all of the major ones. Over the years, apps like Instacast, Pocket Casts, and Overcast have all been on my home screen. Of course, the official Apple Podcasts is still the most popular app since it comes pre-loaded on every iPhone.

For those of us who enjoy technology related podcast, The TWiT network, 5by5, and the Relay FM network have provided us with countless hours of enjoyment over the years. Podcasts are no longer just about technology topics though. There are thousands and thousands of shows relating to almost any topic you could imagine.

According to Pew Research, the industry is growing as well. 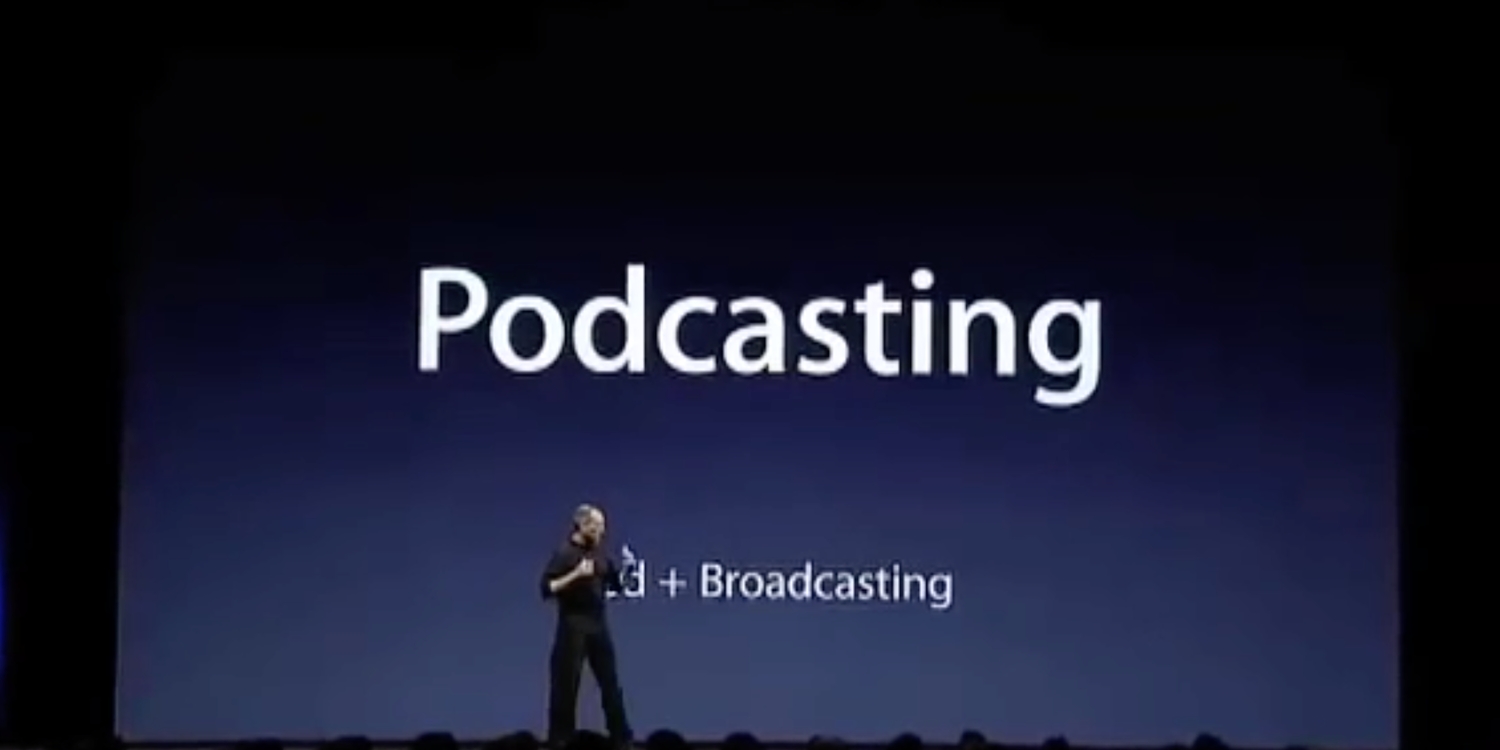 Ultimately, when Apple included podcast support in iTunes 4.9, they decentralized media and jumpstarted an entirely new industry. Anyone could have a voice. Anyone with a microphone and a hosting plan could submit a show to iTunes to build an audience. Apple’s directory is still the defacto one, and they’ve been a great steward of the industry. It’s still built on open standards, and I don’t see that changing anytime soon. They’ve never tried to move to technology that they own and control. As when it started, the iTunes/Apple Podcasts directory is still just a collection of RSS feeds.

One interesting tidbit is that when Apple launched iTunes 4.9, another company was working on a directory. They were called Odeo.

Odeo was a directory and search destination website for RSS-syndicated audio and video. It employed tools that enabled users to create, record, and share podcasts with a simple Adobe Flash-based interface.

When iTunes 4.9 was released, it ultimately made Odeo irrelevant. The people behind the company went on to create a service called Twttr. Does that sound familiar? It should – it’s the original name for Twitter. iTunes 4.9, believe it or not, ultimately led to the creation of one of the most popular social networks in the world.

iTunes 4.9 changed the media landscape forever. Even though there are countless third-party podcast apps, most of them still use the Apple Podcasts directory to build their libraries. I love listening to podcasts, and I don’t see that going away anytime. We’ve gone from complicated methods to downloading shows to downloading them on a watch in the span of thirteen years.

What a ride it has been, and I think it’s just getting started. Thank you, Apple Podcasts!

Looking for a new podcast? Check out the 9to5 family of shows: