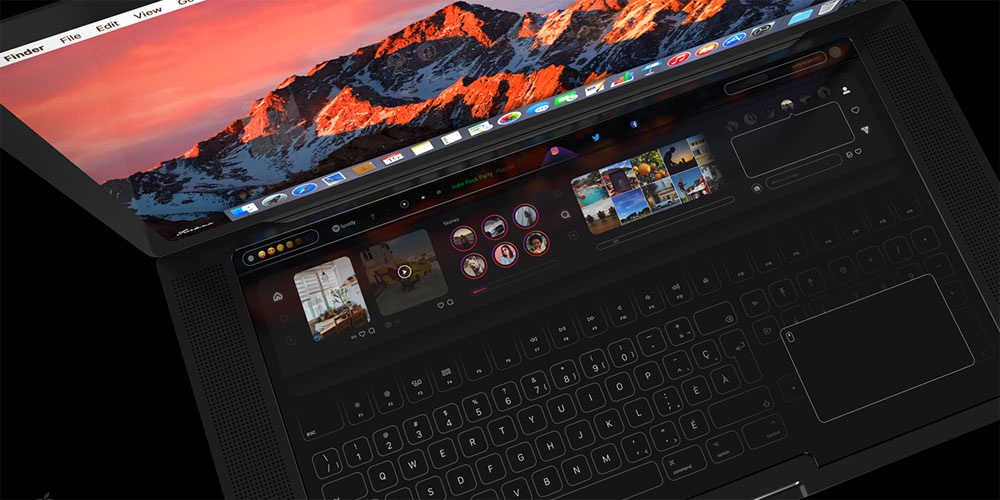 Whether you love or hate the idea of dynamic keyboards, it does seem that Apple is moving gradually in that direction. We’ve seen the company design ever slimmer keyboards with less and less movement, and of course the MacBook Pro range got Apple’s first implementation of touchscreen keys in a Mac: the Touch Bar.

It’s no surprise, then, that concept designers keep imagining what a MacBook Pro might look like with a full touchscreen keyboard …

The latest one, from industrial design student Furkan Kasap envisages a radical new design where the keyboard sits at the front of the Mac, occupying the space currently used for the trackpad, while the trackpad is a virtual one on the right.

The existing Touch Bar remains, but the space freed up above the virtual keyboard is now used for a kind of giant version, which provides more useful app thumbnails.

As with many such concepts, the designer appears to have prioritized a radical new look over usability. The trackpad is far too small, and it’s unclear why there are effectively two Touch Bars.

My own view is that Apple’s next step in this direction is likely to be some kind of hardware dynamic keyboard, like the one created by Sonder. The biggest obstacle in the way of a full touchscreen keyboard is feel.

Haptic feedback does a pretty good job at simulating a keypress, and Apple is training us to accept ever-smaller keyboard movement, meaning we’re probably not far from a virtual keyboard that feels like a real one. But that’s only half the job. Touch typists also need to be able to position their fingers on the keyboard by feel, and that requires advanced haptics that can simulate the feed of the edges of each key even when they’re not being pressed.

Apple is already working on that technology, at which point some more practical version of this concept becomes a real possibility.

Perhaps the entire area becomes a screen-sized trackpad when it detects that we’re using it as one, switching to a keyboard and some larger version of a Touch Bar when we’re not. So while I think this particular concept is muddled to say the least, it may not be too far off the mark in one respect: a giant Touch Bar.