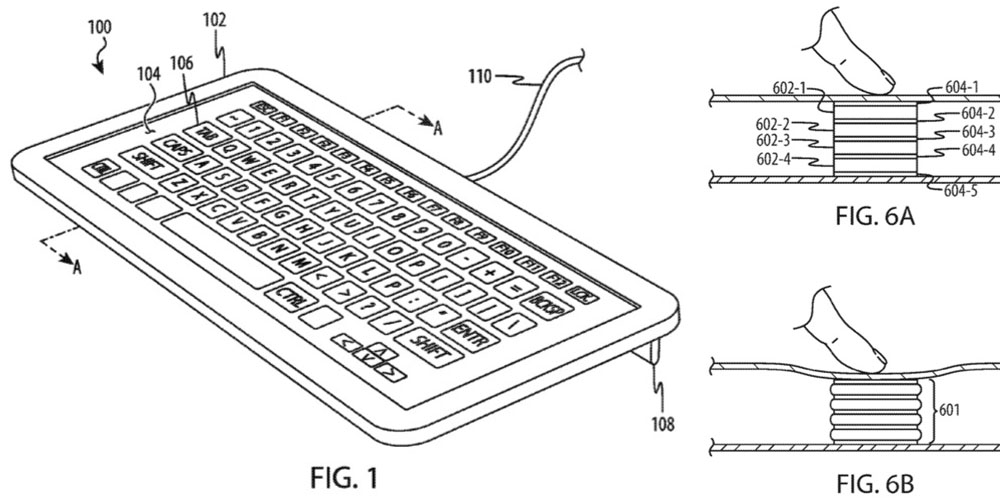 When Steve Jobs unveiled the original iPhone in 2007, he made much of the fact that other smartphones of the time had physical keyboards. That was, he said, an inflexible approach when you didn’t need a keyboard all the time, and where the optimal keyboard layout may depend on which app you’re using.

The same argument could be made for a laptop, but while an on-screen keyboard is fine for small amounts of typing, it can never replace a physical laptop keyboard – unless it could act and feel like a real one. And that’s what Apple tackles in a new patent application …

The patent background almost echoes what Steve said during the iPhone launch (below), albeit using more formal language.

But it acknowledges the challenge of replacing a physical keyboard with a screen-based one on a device designed for typing.

It also notes an additional issue for touch-typists.

Users may rest their fingers on keys that are not being actively selected. Moreover, different users may rest different numbers of fingers on the keys, or rest them with different amounts of force. And the same user may rest different numbers of fingers on the keys at different moments while typing. Thus, the force threshold for detecting a key press may change depending on how many fingers are touching the keyboard. Accordingly, a keyboard with global force sensing may set a force threshold that determines whether a key is pressed based on the number of fingers that are in contact with the surface at a given time (as detected by a touch sensing system, for example).

Apple proposes a three-fold approach to making a screen-based keyboard feel like a physical one. First, allowing a flexible screen to deform when a virtual key is pressed.

When pressed, the user’s finger may form a depression in the keyboard surface beneath the finger. The pixelated capacitive sense layer may detect the depth and/or location of the depression to determine both an amount and a location of a force.

Second, haptic feedback would be used to simulate the click of a real key.

Haptic actuators may provide physical feedback to indicate that a user has pressed the keyless surface with sufficient force to register an input. The haptic actuators may induce a physical sensation that is similar to or representative of a mechanical key.

Third, an electrostatic charge could also be used to simulate the feeling of the edge of a key, making it feel like a real keyboard when you place your fingers on it ready to type.

The main illustration shows an external keyboard, rather than a MacBook one, but Apple’s patent drawings frequently show the most basic user case, often with old-fashioned examples. This idea would seem to make most sense in a laptop.

As with all Apple patents, there’s no telling whether or not the concept will ever make it into production, but there is clear evidence that Apple is moving toward some form of dynamic keyboard. The Touch Bar on the MacBook Pro is, of course, an actual implementation of a dynamic keyboard element.

Using a second screen as a keyboard isn’t the only approach Apple could take. Back in 2016, the company held discussions with Sonder Keyboard, a startup which makes a physical keyboard with dynamic key labels. But the patent does show that Apple is thinking more radically than this, and at least exploring the idea of a completely screen-based keyboard.

What are your views? Would a screen-based MacBook keyboard be a horrible experience no matter what technical trickery Apple employed? Or do you think it actually has the smarts to make a virtual keyboard act and feel like a real one? Let us know your views in the comments.