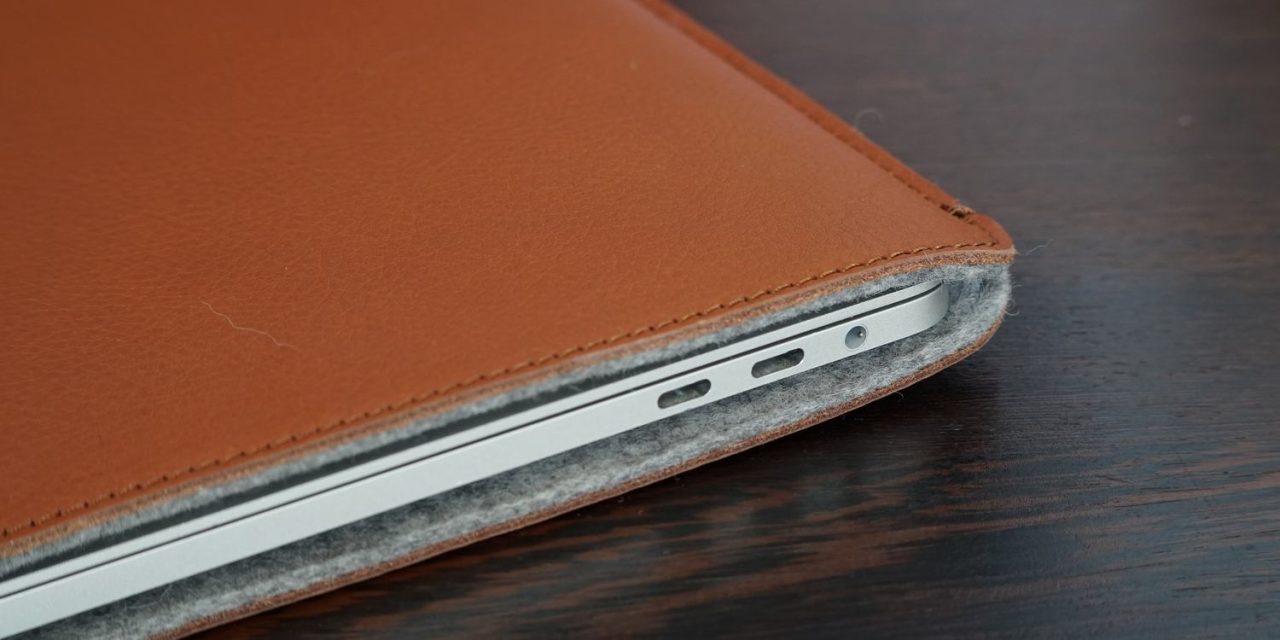 If you’re looking for a sleeve to protect your MacBook Pro inside a bag, or just when carrying it around on its own, you have plenty of options, starting from around ten bucks.

Materials include felt, neoprene and polyurethane. But if you want a real luxury look and feel, there’s no substitute for leather.

If money’s no object, you could opt for Apple’s own Leather Sleeve. But despite its $199 price-tag for the 15-inch version, our review found that it’s still not a perfect option, with two problems …

First, Jeff noted, there’s the fact that you can’t charge your MacBook while it’s in the sleeve.

Even if you go against the grain (heh) and put the MacBook Pro inside the sleeve “backwards,” the USB-C ports would still be recessed too far inside the case to connect to a USB-C charging cable while completely inside. The conclusion is that this sleeve was simply not designed to be used while charging your MacBook Pro [which] I find it to be an annoyance.

Second, it can be uncomfortable to carry.

A secondary complaint is that the bottom edge of the sleeve can be uncomfortable to hold, because a hard edge is created where the two pieces of leather are stitched together. With a 3 pound MacBook Pro inside, I found it slightly uncomfortable to carry around with the edge pressed into my fingers.

So when Woolnut came up with an alternative which appeared to solve both problems – while still offering very high quality leather – that was already interesting. But add in the fact that it costs half the price, and it became something I had to try for myself.

Apple’s sleeve is available in a choice of black, saddle brown (which I’d describe as more of a tan color myself) and midnight blue. Woolnut offers a choice of black and cognac brown. I tend to prefer brown leather, and am a fan of both Apple and Woolnut’s very different shades.

It can be difficult to capture color shades accurately in photos, as exposures often involve some degree of compromise. I’d describe the actual color as darker than it appears in my photos, but lighter than seen in the company’s own photos.

Apple doesn’t specify the leather used in its own sleeves, simply describing them as ‘European leather.’ However, from the look and feel, I’d say it’s likely aniline leather. This is very soft, smooth, high-quality leather subjected to a dye process which gives it an extremely even color.

Woolnut uses full-grain leather. This is also very high-quality leather, but you get more of a visible and tactile grain than you do with leathers used for the aniline dye process. The company uses the vegetable tanning process traditionally used for the best leathers. 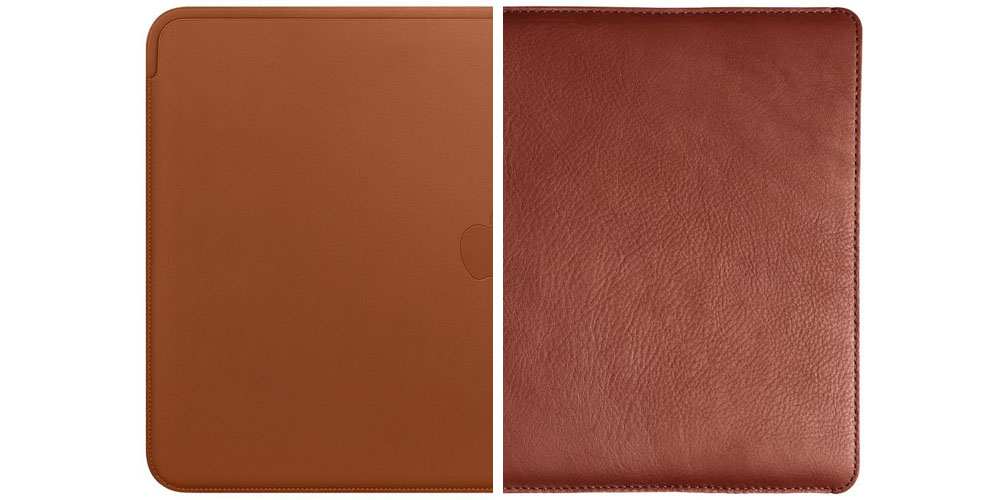 Choosing between the two is very subjective, but suffice it to say I love both. I like the smoothness of aniline leather, and the more obvious grain of full-grain leather. Unless you have a marked preference for one over the other, I don’t think even the fussiest person would be disappointed with either.

The first thing you notice about the Woolnut sleeve is its simplicity, even more so than the Apple sleeve which has the embossed Apple logo on one side, impressed indentations for the feet on the other and a split each side of the opening. With the Woolnut, there’s just the embossed Woolnut name and logo on the bottom of one side and that’s it.

The second is the quality of the stitching, which is the equal of Apple’s. It’s beautifully neat.

Inside, Apple uses microfibre, a common choice when you want a soft material that doesn’t scratch. But Woolnut opts instead for 100% wool felt, a more natural way to achieve the same result. Apple achieves a pretty close color-match, while Woolnut opts for grey felt. The grey does look good, but I think Apple made the better choice here in terms of color.

The leather is absolutely gorgeous to the touch – more so than the Apple sleeve.

I wrote this review in a coffee shop, and I think the other patrons may have suspected I had some sort of obsession from the amount of time I spent feeling it, trying to figure out the best way to describe it. The best description I can provide is that it’s buttery soft.

Jeff mentioned the hardness of the bottom edge when carrying the Apple sleeve, and that definitely isn’t an issue with the Woolnut one. Even the stitched areas are beautifully soft to the touch.

The wool felt is thick enough to provide a worthwhile amount of cushioning, without adding too much to the thickness of the laptop.

Leather stretches with use, so both sleeves are designed to be extremely snug when new. Straight out of the box, it does take a small amount of effort to slide the MacBook Pro inside, just as Jeff found with the Apple one. But it’s no big deal even when new, and will grow easier with time.

The Woolnut sleeve also solves the big problem with the Apple sleeve: being unable to charge the MacBook without removing it. That’s because Apple has the opening on the long side, with the USB-C sockets inaccessible. Woolnut, in contrast, has the opening on the short side, leaving two USB-C ports fully accessible. You can thus easily put your MacBook on charge while leaving it in the sleeve. I tested this, and the machine didn’t seem to get any warmer than usual.

Even if both were identically priced, the softer feel in the hand and ability to charge while inside the sleeve would be solid arguments in favor of Woolnut. But throw in the fact that the Woolnut sleeve is literally half the price for something which looks and feels just as good, then – unless you have a strong preference for aniline leather or are willing to pay a lot for that Apple logo – Woolnut presents a very compelling case.

The Woolnut Sleeve for MacBook Pro is available from the company’s Amazon store in a choice of black and cognac brown for $89 or $99 depending on model.