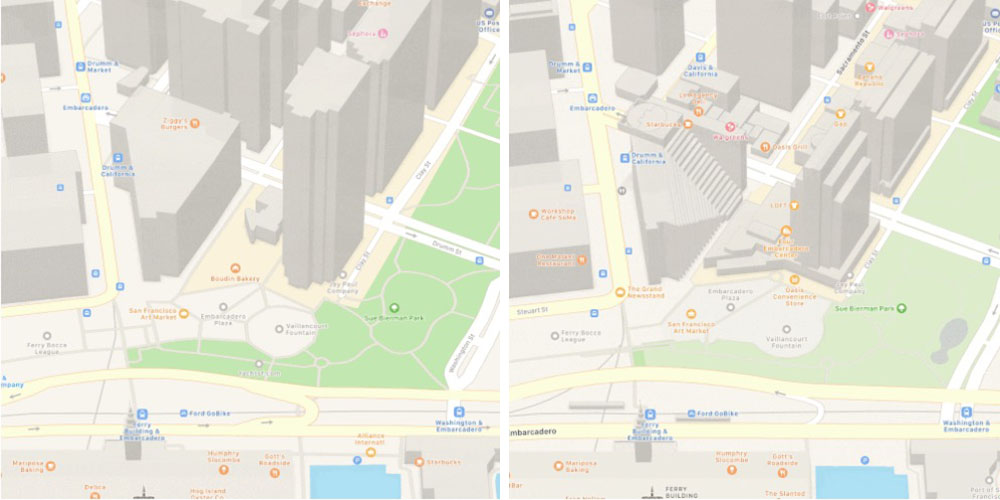 Apple Maps detail now beats Google Maps in many respects, from things like building shapes to vegetation coverage. That’s the conclusion of Justin O’Beirne, who used to work for Apple’s maps division and has now put together an exhaustive comparison …

O’Beirne begins with one complaint: that Apple’s more detailed mapping only covers 3.1% of the land area, and 4.9% of its population. Apple has promised 100% coverage by the end of next year. The company is also continuing to improve coverage outside the US.

But that aside, he is blown away by the level of Apple Maps detail now available.

But don’t let its size fool you—it’s a dramatically different map from before, with a staggering amount of vegetation detail […]

The most striking differences are in smaller cities farther away from the Bay Area, like Crescent City. Crescent City is one of the 52 county seats located within the new map’s coverage area. Surprisingly, 25% of these county seats had no vegetation or green areas whatsoever on the old map—and now they look completely different.

I feel tired just looking at the amount of work O’Beirne has put into the comparison to create animated GIFs comparing both old and new versions of Apple Maps, as well as comparisons with Google Maps and other mapping services. He said what’s most remarkable is the extreme level of detail Apple Maps now has.

What’s really remarkable about this new vegetation detail it how deep it all goes—all the way down to the strips of grass and vegetation between roads, inside of cloverleafs and even around the corners of homes.

In an exclusive interview, Apple told TechCrunch ‘We don’t think there’s anybody doing this level of work that we’re doing,’ and that’s certainly true of this house-resolution vegetation detail. Nobody else has it.

O’Beirne gives examples of similar levels of detail in things like beaches, harbours, racetracks, parking lots and golf courses, where fine-level shapes are shown in place of the more typical general representations.

Building footprints are now much more accurate, with some buildings ‘spectacularly detailed.’ San Francisco’s Five Embarcadero Center, shown at the top of this piece, is one example.

It’s not that the new mapping is perfect. O’Beirne also points out a number of errors, including several buildings showing the wrong height. Some buildings still completely lack detail, and Google still has more businesses listed. But overall, he says Apple Maps detail has at least caught up with Google.

All of these details create the impression that Apple hasn’t just closed the gap with Google—but has, in many ways, exceeded it.

The whole post is a really interesting read – including speculation as to the methods Apple is using, and how it has made some strange mistakes.