Facebook Messenger rolling out new ‘Unsend’ feature, here’s how to use it 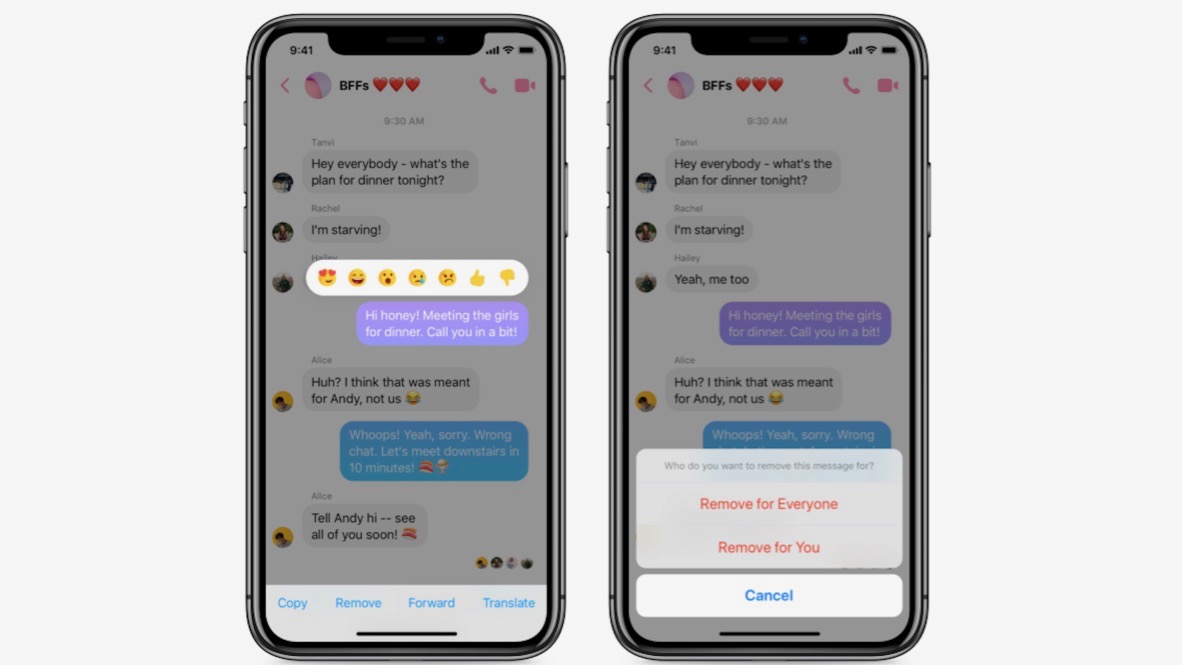 After teasing the feature last week, Facebook today has officially started rolling out an “Unsend” functionality to Messenger on iOS. The feature is only rolling out in select countries for now, but TechCrunch highlights exactly how it will work for Messenger users.

First and foremost, you have 10 minutes after the original message was sent to delete or edit it. Additionally, Facebook will retain a copy of any unsent message for a period of time to ensure the message did not contain any policy violations.

In order to access the new functionality, which Facebook is calling “Remove,” you simply long-press on a message in the Messenger app. From there, you’ll see options to copy the message, remove it, forward it, and translate it. Choosing the “Remove” option displays a prompt asking if you’d like to remove the message for everyone or just yourself.

Lastly, Facebook Messenger will display a notice offering more detail on what happens when you remove a message:

”You’ll permanently remove this message for all chat members. They can see you removed a message and still report.”

As that popup indicates, when you delete a message in Facebook Messenger, the app will display a notice in the thread indicating that “you removed a message,” which is visible to everyone in the group.

Facebook’s head of Messenger Stan Chudnovsky offered some color on the feature in an interview with TechCrunch:

“The pros are that user want to be in control . . . and if you make a mistake you can correct it. There are a lot of legitimate use cases out there that we wanted to enable. We need to make sure we don’t open up any new venues for bullying. We need to make sure people aren’t sending you bad messages and then removing them because if you report them and the messages aren’t there we can’t do anything.”

To start Facebook is rolling out support for unsending messages in Poland, Bolivia, Colombia, and Lithuania. Facebook hopes to roll the feature out globally as soon as possible, but details are unclear.