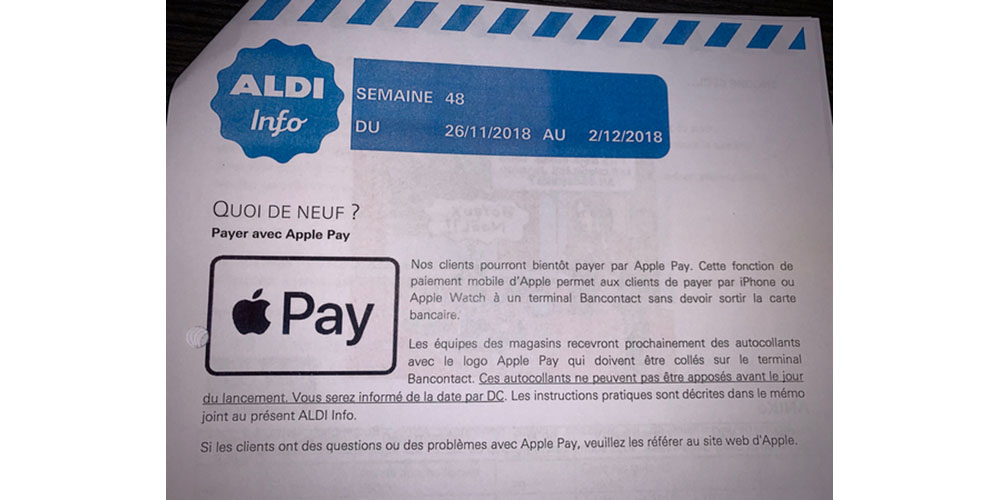 A report a few weeks ago suggested that Apple Pay would be launching in Belgium this month, initially for customers of BNP Paribas Fortis. We’re today seeing more evidence than the launch may be imminent …

Mac4ever has seen a letter from supermarket chain ALDI to its employees, explaining how Apple Pay works.

The letter, which takes a newsletter format, is issued for the period November 26 to December 2, but doesn’t specifically give a launch date for Apple Pay.

The previous report suggested that it will at first be exclusive to VISA and MasterCard payment cards from Fortis, but may include subsidiaries Hello Bank and Fintro.

Both Apple’s own website and that of a major bank also say the mobile wallet service is coming soon to Germany.

Earlier clues have suggested that Apple is readying itself for a rollout of its peer-to-peer payment service, Apple Pay Cash. Belgium was named alongside Italy, Switzerland and the UK, which would obviously require Apple Pay itself to be available in the former country. We do, though, need to be aware that not all such clues have panned-out.