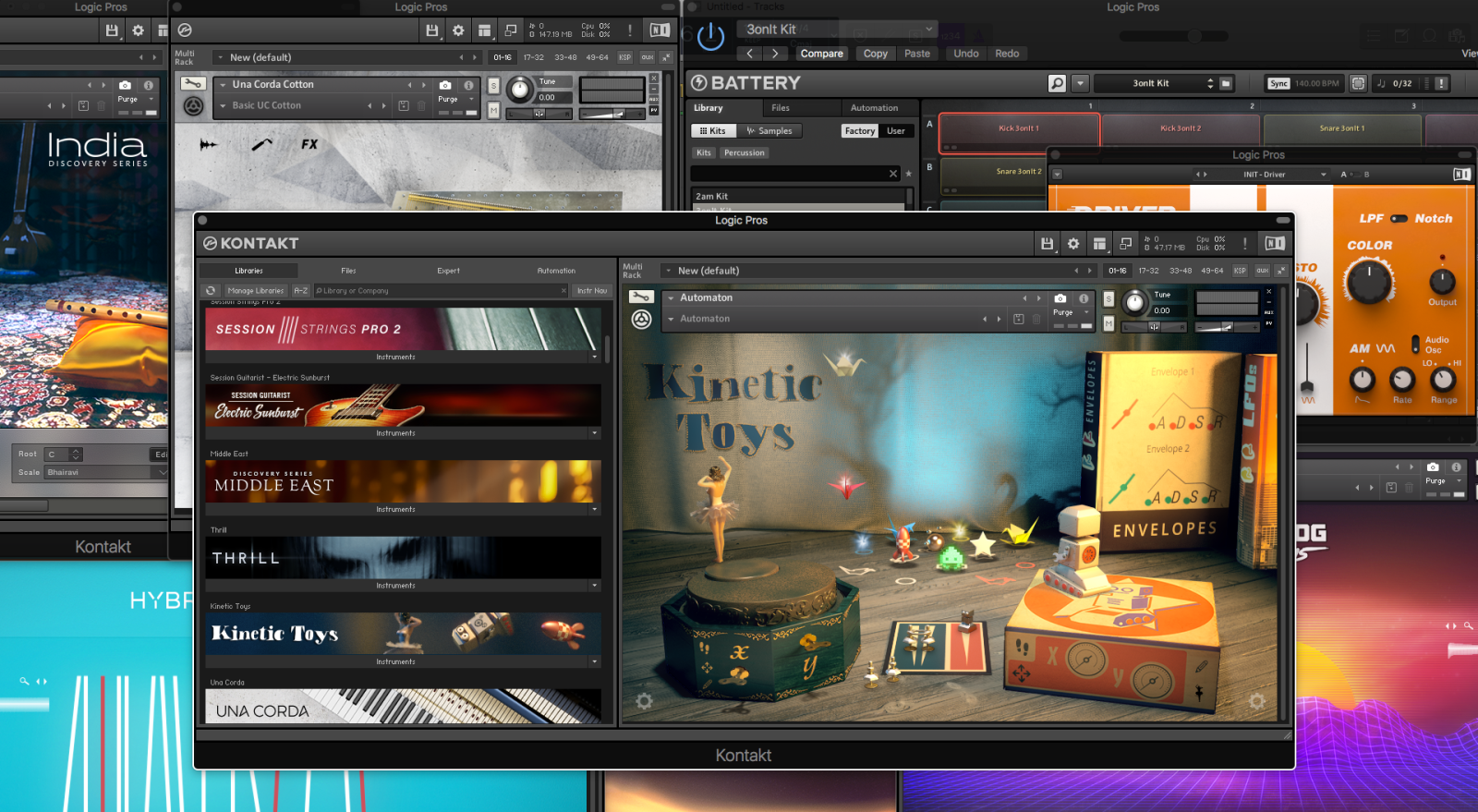 Native Instruments has always been one of our favorite audio software makers out there. So when it unveiled the new Komplete 12, we were extremely excited to say the least. This is easily one of, if not the best collection of software instruments, samplers and sound libraries on the planet, and has been a go-to in our personal arsenal for many years.

The latest version bundles an astounding number of products from massive orchestral sound libraries to world-class software synthesizers and some of the most interesting sampler instruments out there. After extensive testing and having a chance to implement the new gear in our ongoing productions, we are now ready to bring you our Komplete 12 review.

The Native Instruments Komplete 12 bundle is available in various tiers. Those include the more affordable 45GB Select configuration all the way up to the gigantic 900GB Collector’s Edition bundle. For the purposes of our Komplete 12 review, we will be referring to the full-on CE bundle as it encompasses everything found in the other options along with a whole lot more. We will go over the value proposition for all of the offers below as well as the overall versatility and quality of the products included in this wide-ranging sound package.

It contains over 100 different instruments and another 50 expansion libraries, on top of all the engines they run on. For the purposes of our main Komplete 12 review, let’s zero in on the most notable elements and the overall value.

And as a quick disclaimer, we would have been purchasing an upgrade from the previous Komplete bundle for the Collector’s Edition the second it was available regardless of whether it was getting reviewed or not.

You could easily argue that Kontakt 6 is the world’s best software sampler and the heartbeat of Komplete 12. Not only has NI constantly supported it with new (first and third-party) instruments over the years, the engine itself got a major overhaul this time around. Sound designers and instrument makers are getting some massive upgrades here including wavetable synthesis, new effects options and some serious scripting/library related enhancements. While that might not sound all that exciting for your average beat maker or artist, it does mean we are going to be getting even wider array of instruments for Kontakt very soon. And that’s saying a whole lot considering how incredible the offerings already are with Komplete 12. 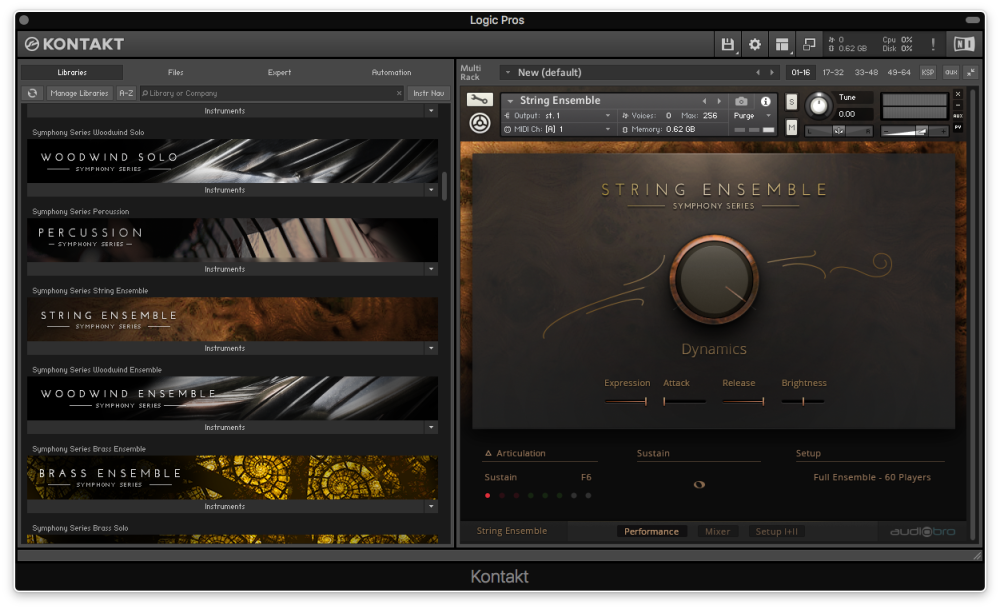 As far as we are concerned, the Komplete 12 Symphony Series is fantastic. The interface with which you can customize each of the elements of your orchestra isn’t quite as nuanced as some of the competition. But these samples and the possibilities the instruments provide are well worth the price tag. Unless you have already invested hundreds (or much, much more), these will be the best sounding strings and woodwinds in your library the second they get installed on your system.

While it has been said before, Native Instruments doesn’t necessarily have the most detailed string library instruments out there. But this thing includes all the brass, strings, woodwinds and even orchestral percussion you could need, providing you’re not about to score the next Spielberg flick. For pop music and anything less than the most professional string library needs, it is easily one of the best value propositions out there. Especially when it’s bundled in Komplete, which also includes another 41GBs of pop orchestral sounds inside of Session Strings Pro 2 and Session Horns Pro. 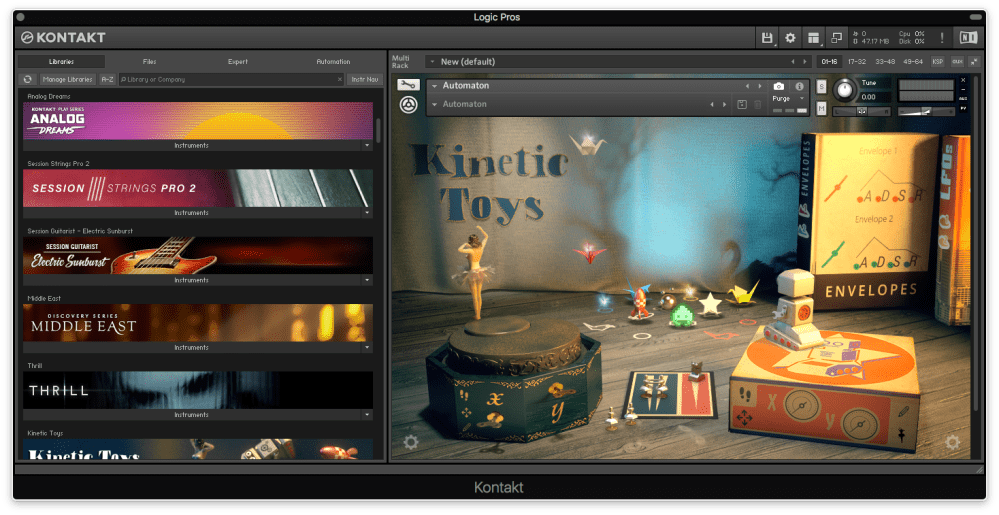 This Kontakt instrument was already available as a standalone product ahead of the release of Komplete 12. But with its inclusion in the bundle and just how mind-blowing it is, we just had to mention it in our Komplete 12 review. A brilliant combination of vintage children’s toys and intelligently integrated synthesis, Kinetic Toys offers up some of the most magical noises and melodic content we’ve heard in a while. It might sound a little gimmicky on the surface, but it ranges from charming music box tones and horror-inducing ambiances to some of the most marquee electro-pop/hip-hop licks you could ask for. Its almost entirely foreign and one-of-a-kind interface is disorienting in the best possible way for a seasoned patch designer. This one is as inspiring and wondrous to look at as it is to use.

Thrill makes use of a 30+ GB sample library to form an absolute beast of a cluster machine. This thing will help you create huge swelling textures and atmospheres ranging from suspenseful pads to devastating string crescendos. There’s some great performance possibilities here too with the X-Y pad that allows you to custom tailor each of the 687 presets or any of your own creations. We are still toying around with interesting ways to integrate this cinematic monster into other forms of sound design and song production, but you can expect a more detailed rundown from Logic Pros on this one in the future. Needless to say, it in no way, shape or form stops there. The new Kontakt Play Series instruments (Ethereal Earth, Hybrid Keys, Analog Dreams) are fantastic sounding and offer up loads of new possibilities for everything from 80’s-influenced synth music right up to the most modern trap beats.

Other serious highlights include the new drum and bass machine, TRK-01 (expect more on this sucker coming soon as well) and the Discovery Series which includes some amazing sampler instruments from India, Cuba and West Africa. The Una Corda is another beautiful Kontakt instrument that leverages some precious and subtle piano tones for a unique take on your average piano sampler instrument.

If we had to find something to complain about here, and it isn’t easy, it would probably have to be some of the tired user interfaces. It would have been nice to see some of the older instruments get a serious face lift for Komplete 12’s release. That would have to include the aforementioned Massive and FM8 as well stuff like the absolute classic, Absynth 5. But these are minor, aesthetic gripes at best. All of these instruments have been and will continue to be mainstays in our sound libraries.

One thing that should be mentioned here is Massive X. It is included in all but the lowest tier versions of the bundle. But it will not appear in our main Komplete 12 review until it releases in February 2019. You can expect a full hands-on with Massive X shortly after release. It is built on arguably the world’s most famous wavetable synth (and a personal favorite around here) in Massive, and is in turn one of the most highly anticipated upcoming releases in music production.

When it comes to a massive bundle of instruments like this, versatility is an important metric to consider. And Native Instruments does a great job here.

You get world-class synthesizers with Massive and FM8 with a mind-boggling number of brilliant organic sampler instruments. Plus a wide selection of traditional/world instruments as well as insane specialized percussion options (we’re looking at you Damage). On top of that you can add some of best collections of drum samples and a bunch of imaginative sound sources you just won’t find anywhere else.

Is there anything else that could even be in there? Did we leave anything out? Oh, and you also get the modular/design-your-own-synth Reaktor engine and 25+ world-class creative/utility effects processor units. Plus vintage organs, more pianos than you’ll ever need and an entire instrument specifically tailored to creating your own crescendos/swooshes.

But best of all, you get great value for your money, most of the best sounds you can spend it on and an absolutely massive injection of near-endless inspiration.

Now clearly, the higher tier bundle you opt for, the better the value. The CE bundle is under $2 per GB, but that’s not necessarily the best way to value this thing. I mean, how do you calculate a metric for awesomeness per GB? However you might do it, NI is going to come out looking really good.

Just the Symphony Series Collection and a couple of those instruments alone are individually valued at more than the $1,599 Collector’s Edition price tag. While the value drops slightly as you move down the tier options, you’re still saving hundreds of dollars here. NI has a friendly upgrade system which will allow musicians to bring additional elements of collection to their arsenal as they see fit as well.

The $199 Select bundle might leave a little too much to be desired for all but the most casual of users. But jumping up to $599 standard edition will more likely suffice if you’re not a complete sampler instrument glutton like me. You won’t get your hands on that $1,000 orchestral library or some of the more quirky instruments, but it will take your sound palette to the next level. You’ll secure Massive X in February along with all of the major synthesizer options, the (in my opinion) best drum sampler instrument out there in Battery 4, Una Corda, some great acoustic drums, the Discovery Series, and well, a lot more. You can see all of the differences between each of the 4 tiers right here.

Native Instruments has always dominated our library of sounds and instruments to some degree and it certainly won’t be losing any ground. It is easily the best collection of software instruments you can add to your Logic Pro X setup in one shot. The company has attracted some of the most talented instrument developers to its platform resulting in an extremely versatile and frankly, unparalleled collection of sounds.

Komplete 12 offers incredible quality at a considerably amazing price no matter which tier you jump in at. Especially with the pricing upgrade system that won’t punish musicians looking to slide into the NI ecosystem at their own pace. Komplete 12 is an automatic purchase for us. And if you haven’t already jumped in, we suggest you should do it right now.

Have you had a chance to dive in to Komplete 12 yet? Any favorites emerging? Let us know what you think of the new gear in the comments below.

Want more Logic Pros? Check out the archives here and stay tuned for a new installment each week.