Hands-on: Osmo Pocket, a really small and powerful gimbal – at a price [Video] 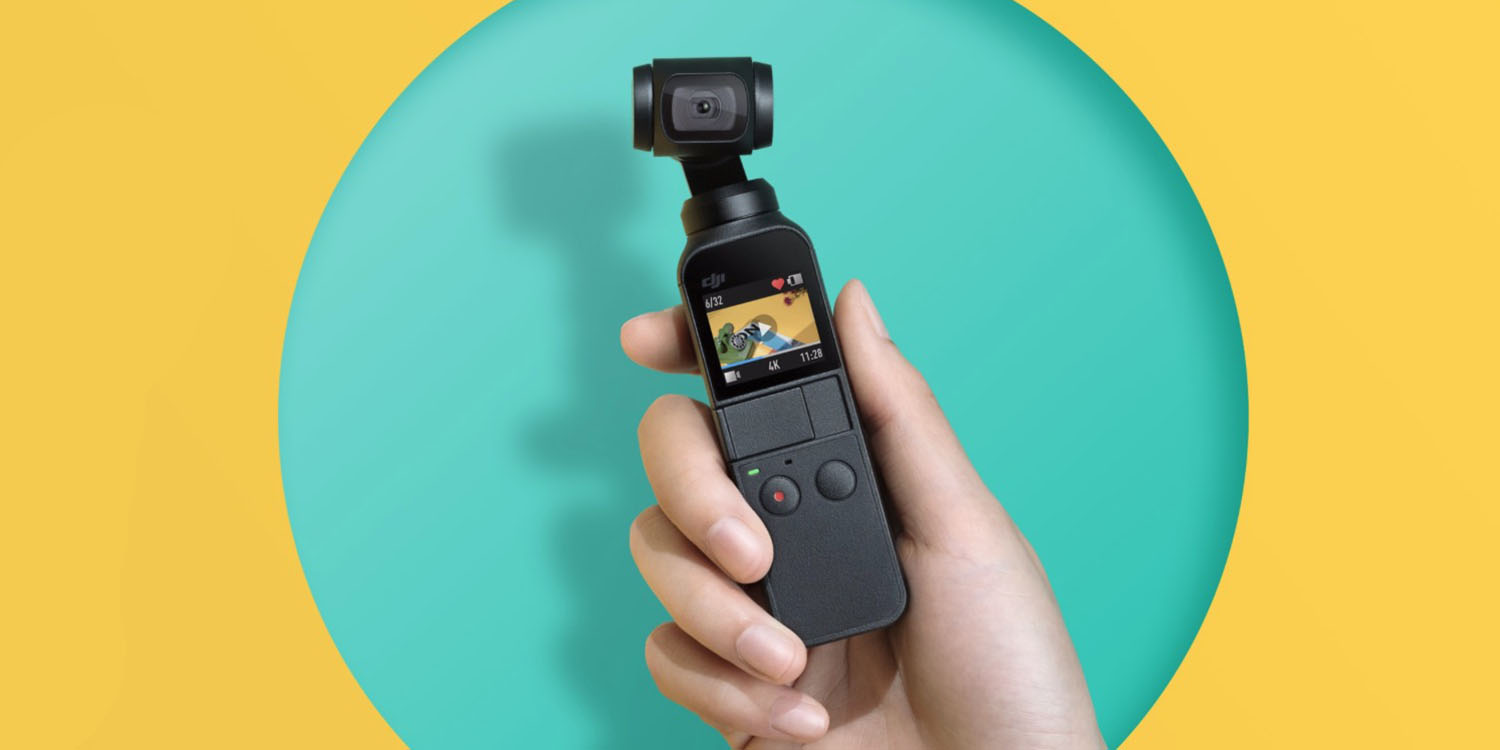 I described the DJI Osmo Mobile 2 as the best-value iPhone gadget available at the time, and I still think it’s an incredibly impressive piece of kit for the money. With the Osmo Pocket, DJI has aimed to shrink down those same capabilities into a truly pocketable device …

One of the keys to shrinking down the unit has been abandoning the need to use your iPhone (though that statement does get a rider, below). The Pocket has a tiny built-in camera, about a fifth the size of a GoPro.

Effectively, this is going back to the Osmo’s roots – the very first version had a built-in camera – in a massively more pocketable form factor.

What you get is a matte black plastic device measuring less than five inches long by 1.5 inches wide and just over an inch deep. It weighs a fraction over four ounces.

This is a genuinely pocketable device. Ok, it’s a little bigger in the supplied protective case I would say is all but essential to protect the gimbal mechanism, but it still fits comfortably into a jeans pocket. It’s truly something you could take anywhere with you, even carrying it casually on the off-chance you might need it – something you’d never do with the Osmo Mobile 2.

The handle part of the unit has a tiny touchscreen, a power/multifunction button and a record button – and a sliding plastic flap we’ll get to.

Finally, there’s a USB-C charging port at the bottom. DJI says it charges in 73 minutes when using a 10W charger.

In principle, the Osmo Pocket is usable straight out of the box. However, you need to ‘activate’ it first. This requires plugging it into your iPhone and using the free DJI Mimo app.

To connect the Pocket to your iPhone, you slide off the plastic flap and insert the supplied Lightning adapter. There’s also a USB-C adapter for use with modern Android phones.

I understand why DJI has taken this approach. It wanted the device itself to be useable with any modern phone, and it wanted to keep the unit as small as possible. But I have to say the Lightning adapter is my least-favorite aspect of the device. You either have to leave it connected all the time, which is messy and can interfere with your grip, or you know that it’s only a matter of time before such a tiny accessory gets lost.

The lens is an 80-degree one. At that sensor size, it offers a reasonably wide FOV, but doesn’t come anywhere close to the 170 degrees you get from a GoPro. In part, however, that’s a deliberate decision by DJI, as it is largely aiming the device at vloggers, who will mostly use the device in selfie mode – the camera facing them. A very wide-angle camera held close to your face does not give a flattering view!

Claimed battery life is up to 140 mins at 1080p/30fps. I wasn’t able to use it long enough to do a real-world test. You can charge it (via USB-C port) while it is in use, though, so an external battery-pack would be an option for things like long timelapses.

The Osmo Pocket in use

Once the device has been activated, you can mostly use the Pocket as a completely standalone device.

Pressing the multifunction button switches between video and photo modes, and swiping on the touchscreen lets you change settings. You can also access things like motion-lapse, one of my favorite features of the Osmo Mobile 2 and one I was glad to see carried over to the pocket – you’ll see an example in the sample footage below.

For static handheld use, the gimbal performance is excellent. You get really smooth footage while panning around. There’s also object tracking, which is particularly useful for hyperlapses, where you can choose an object to keep centered while you walk toward and past it. But the most useful tracking tool for vloggers is face-tracking. You can move your hand around, and it will keep your face centered.

It will also follow you if you mount it in a tripod. But this is the one drawback of the tiny size: there’s no tripod thread on the bottom. The only way to mount it on a tripod is to plug it into your phone and then using a phone holder like this to attach the combined unit to a tripod. That works well enough, but it is a shame that you can’t do it without your phone.

Footage is still smooth when walking carefully – but you do get a smooth bobbing motion when walking normally, or running. It’s definitely a lot better than the jerky motion you get without a gimbal, but it’s not to everyone’s taste.

Dynamic range is somewhat limited, though the auto-exposure adjusts well to changes of lighting conditions, as you’ll see in the sample shots.

Low-light performance is another limitation of the small sensor.

The built-in microphone is probably the greatest weakness of the device. It faces you – which is good for vlogging, not good for recording anything in front of you – and isn’t great quality. Realistically, the built-in mic is only usable for vlogging, and it isn’t really good enough for that. So you’re going to need to budget for the ‘optional’ mic adapter to use an external microphone – and we don’t yet know what that will cost.

With the original firmware, there were some things you could only do with your iPhone connected – like change frame rate. I had very little time to try it with the latest firmware, but DJI does seem to have made the standalone device very much more capable. The company wasn’t able to tell me exactly what features require the app.

The latest update also added a Story function, which does need the app. With this, you choose a template and the app then walks you through the types of shots you need to take, making the gimbal movements automatically to create the desired effect. Here’s a DJI walk-through and sample video:

I described the DJI Osmo Mobile 2 as the best-value iPhone gadget as it cost $129. The Osmo Pocket, in contrast, costs $349.

Yes, you get a 4K camera for your money this time, but we all have one of those in our pocket. So really the deal here is you’re paying an extra $220 to get the device down to pocket-size. Plus whatever the upcoming mic adapter costs once it’s available.

Whether that’s worth it will be a very subjective decision. I do absolutely love the size of it. If I were a vlogger, or used a gimbal a lot while travelling, I’d buy it without any hesitation. But for my particular use-case, for the limited amount of gimbal shooting I do, the equation doesn’t quite add up.

The DJI Osmo Pocket costs $349 and is available on Amazon. Check out the sample video clips below.