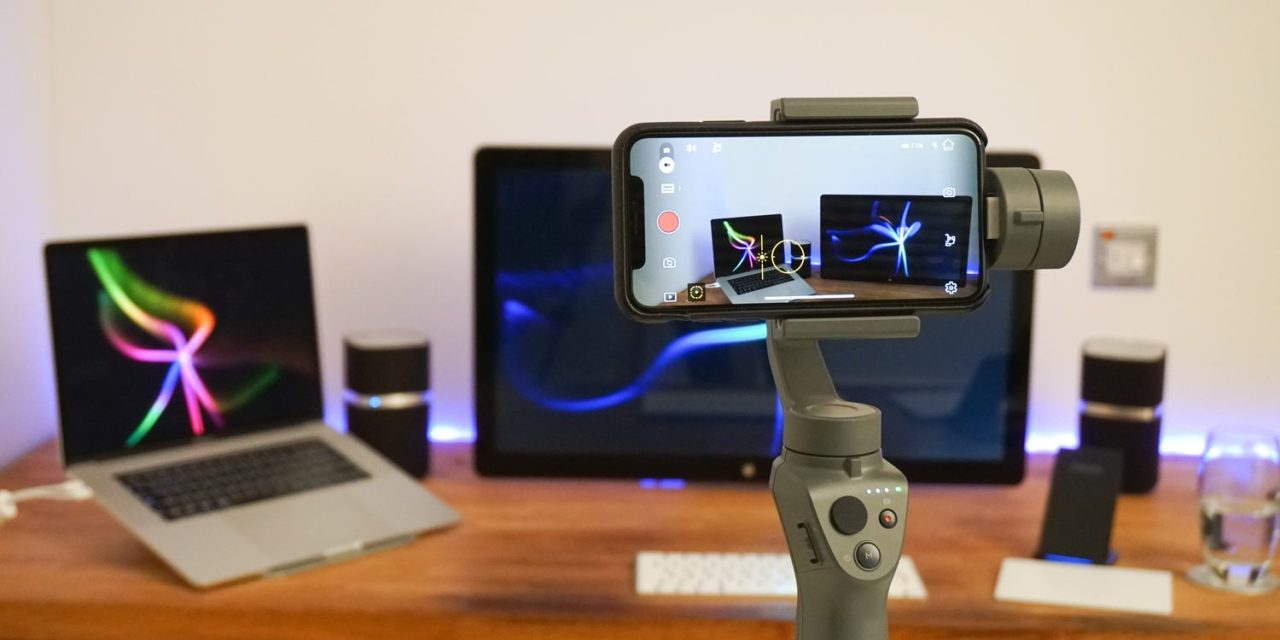 If you’ve got any recent model iPhone, you’ve got a great camera – both for still photos and for video. So good, in fact, that many independent filmmakers use it to shoot both shorts and full-length movies.

But such reports can give a somewhat misleading impression. Very often, the iPhone is the capture device, but it’s coupled to far more expensive supplementary kit like professional lenses, and gimbals to smooth footage.

What DJI has done with its latest gimbal is to bring smooth mobile shooting – and more – down to a price level that makes it extremely affordable. So much so that, when you consider all the things it can do, I’d say it qualifies as the best-value iPhone accessory on the market at the moment …

What does a gimbal do?

One of the things that distinguishes professional-looking video footage from amateur is the steadiness of the camera. Professional footage uses tripods for static and panning shots, and a range of devices for moving ones.

Visit a mainstream movie set, and you’ll see everything from dollies – camera mounts that run on rails – to huge cranes or jibs to get smooth aerial shots.

For shots where the camera operator needs to walk, a Steadicam device is usually used. This smooths out walking motion to give an appearance of the camera floating along. A gimbal is a mechanical or electronic device designed to do the same thing.

With an electronic gimbal, gyroscopes and motors are used to counter the movements of the person holding it.

DJI’s first move into handheld gimbals was the Osmo, a complete camera system which used a smartphone as a monitor. An upgraded Osmo+ model followed, but what really grabbed people’s interest was the Osmo Mobile, a device which for the first time allowed you to use your iPhone (or other smartphone) as the camera.

The original Osmo Mobile cost $299, but for the next-gen model, the Osmo Mobile 2, DJI has actually improved the product significantly while also cutting the price to just $129.99.

The device comprises the gimbal itself, set on top of a battery-handle with four controls. There’s a power/mode button for switching the device on and off, and changing between two different modes, which we’ll talk about in a moment.

A 4-way joystick control allows you to move the camera up, down, left and right. This is only useful for initial positioning: it’s unfortunately not slow or smooth enough to be used while shooting.

There’s a red record button, used to take photos in still mode and start and stop recording in video mode. This works via a Bluetooth link to the iPhone.

Finally, there’s a zoom in/out slider on the left that also works via Bluetooth.

On the side, there’s a micro-USB port to charge the battery – which has a claimed life of 15 hours. And at the back, there’s a USB-A port which you can use with a Lightning cable to keep your phone powered. The gimbal can also act as a battery-pack to recharge your phone when not in use. 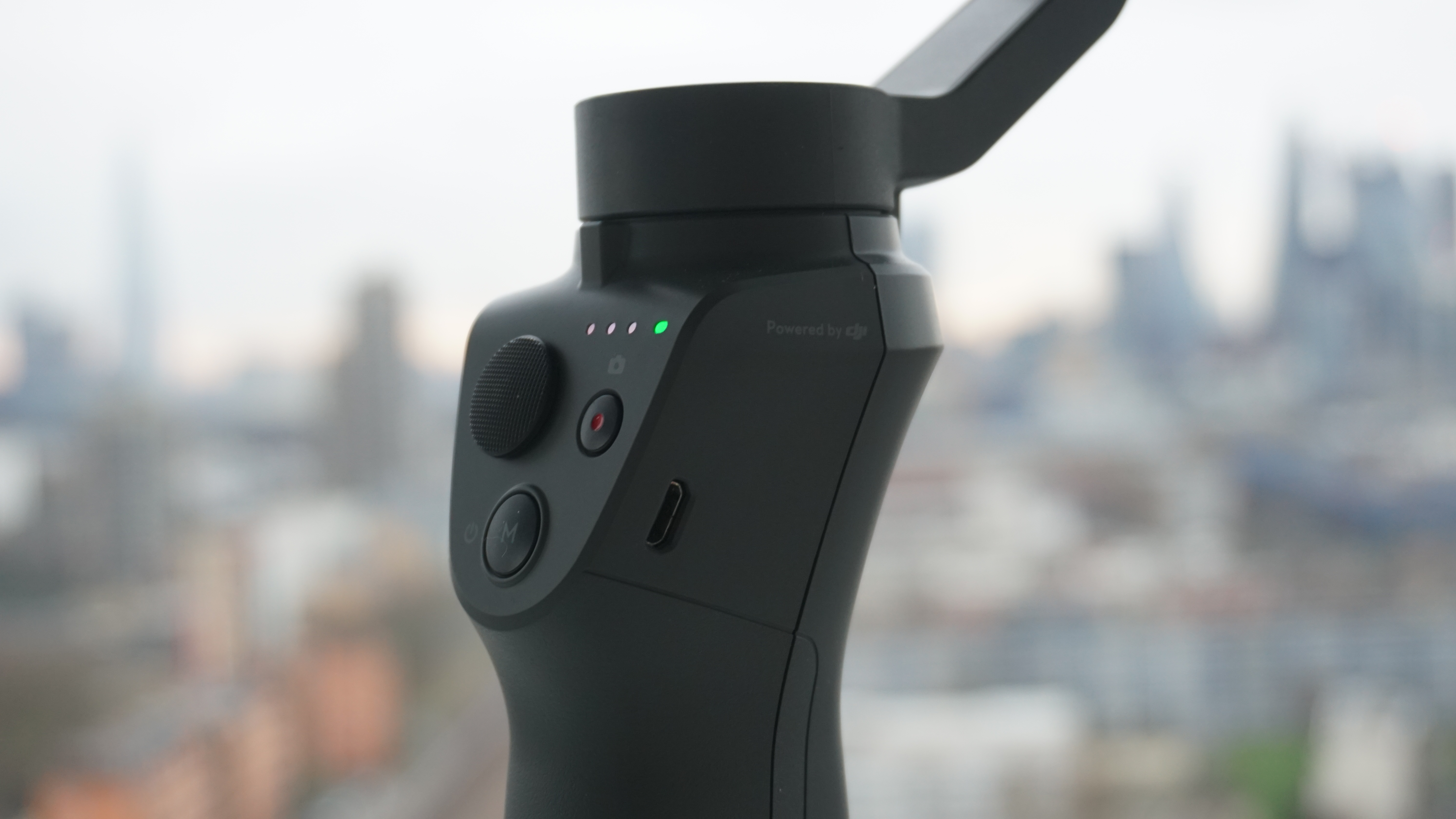 The most common use of a gimbal is shooting while walking. Normally, you’d get a jerky up-and-down movement with each step, which a gimbal smooths out. The Osmo Mobile 2 (OM2 from now on) doesn’t entirely eliminate the up-and-down motion, but it does transform a very abrupt movement into a smooth, gently bobbing one. You can see this in action in the video at the end of the piece, along with examples of other types of use.

This is particularly useful for vloggers who do walk-and-talk pieces – though personally I aim to stay behind the camera! 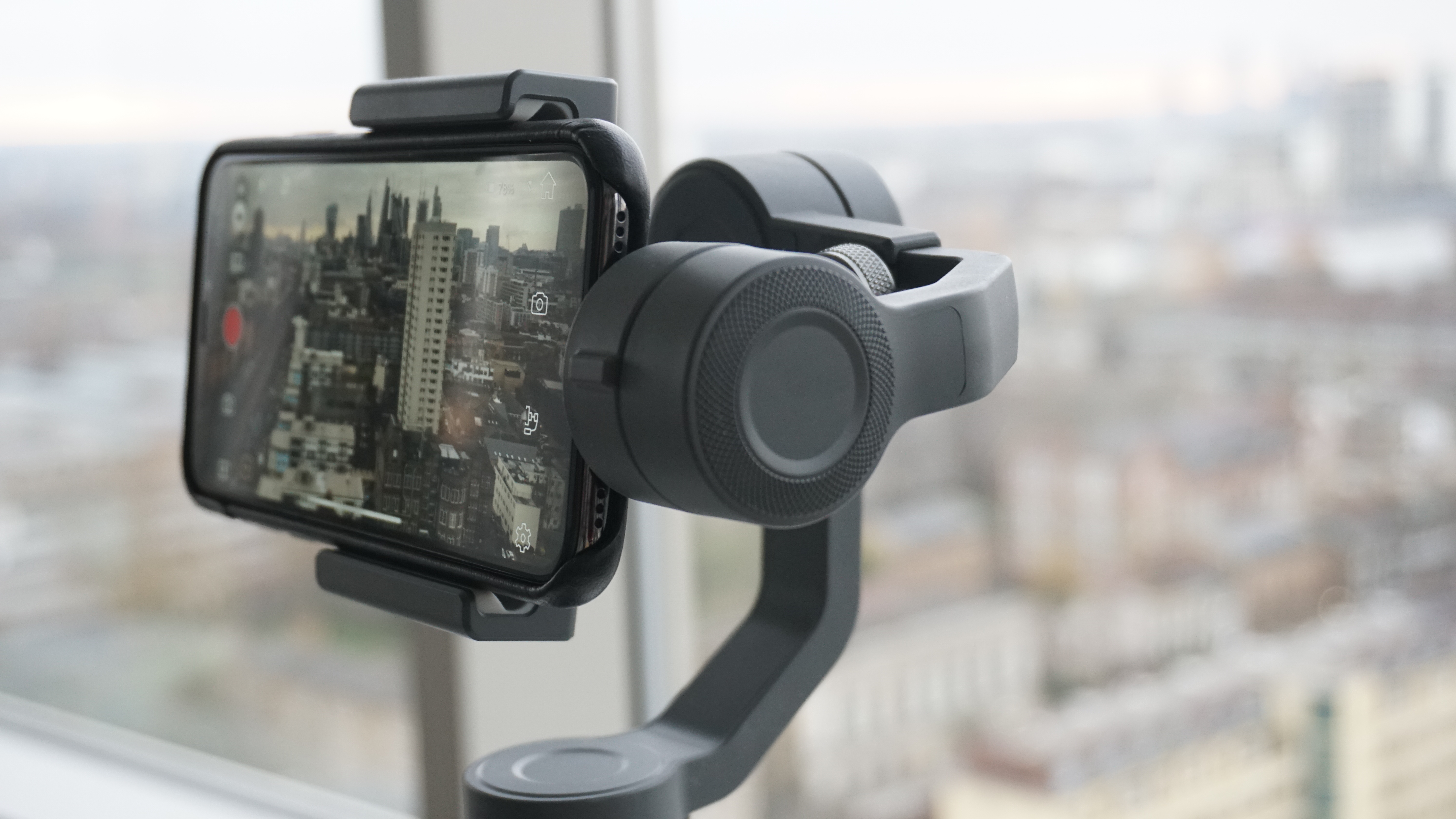 The OM2 also smooths out panning motions, where you sweep the camera from left to right. No matter how gentle you try to be in your movements when doing this manually, there will always be variations in speed as you turn your body. You’ll also usually get inadvertent up and down movements.

The OM2 has a mode where instead of locking in a particular direction, it follows your movements, but slowly, smoothing out any jerky motion. 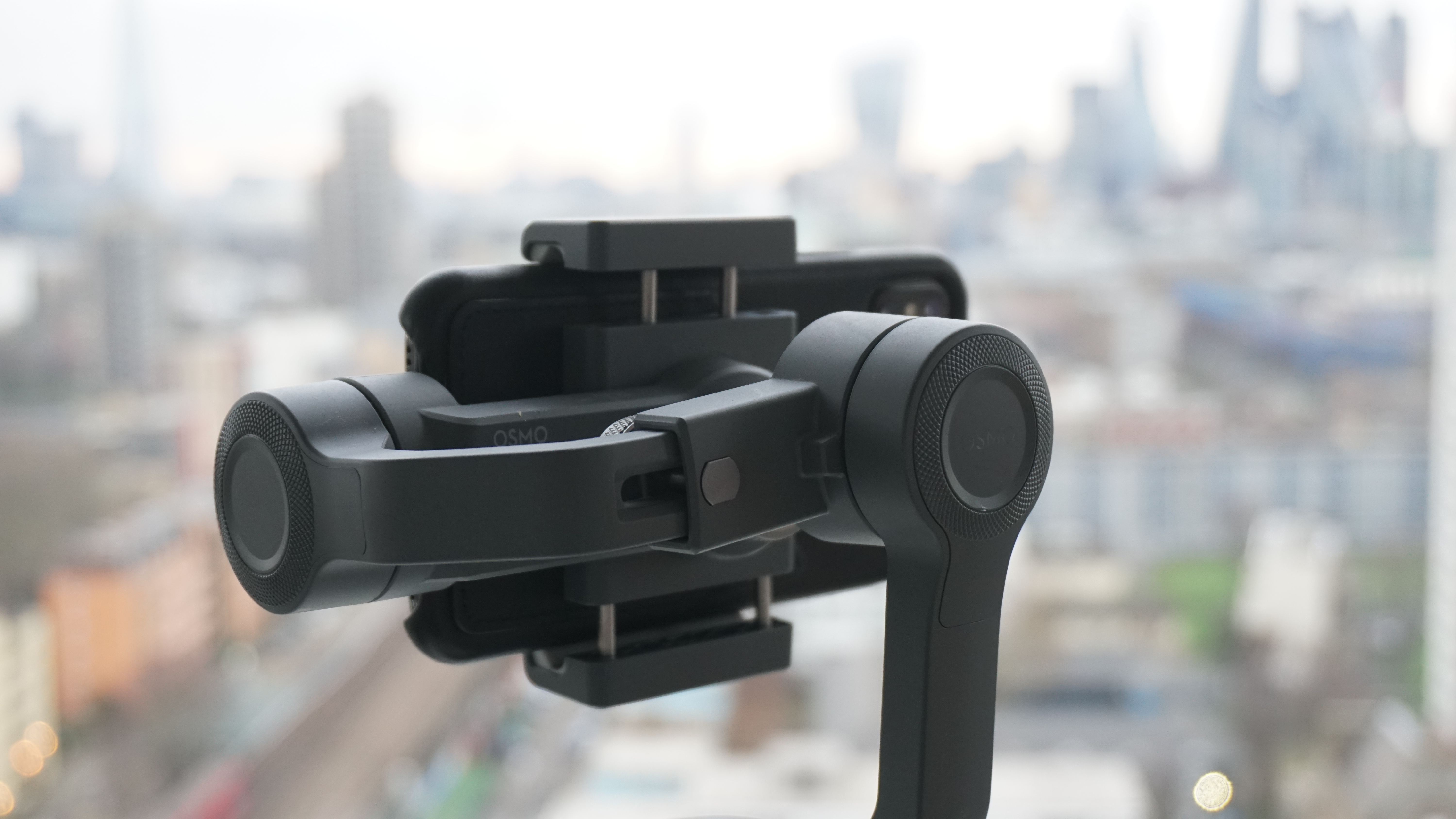 So far, so standard for any electronic gimbal. But the OM2 has a couple of bonus features, the first of which is subject-tracking.

Place the OM2 on a tripod, select tracking mode and point it at a person. It will then automatically track that person’s movements, moving the camera to keep them in the shot.

Again, this could be useful for vloggers who want to shoot a piece to camera, moving around to point to different things.

But the most impressive trick the OM2 can perform is a motion time-lapse.

The standard iPhone camera app can, of course, do a conventional time-lapse. But the OM2 can move the camera during the time-lapse, panning left or right, tilting up or down, or any combination. It can even do more than one movement – for example, panning from left to right and then tilting up.

Motion time-lapse is something that normally requires significantly more expensive devices. But here all you need is the OM2 and the free DJI Go app – plus either a tripod or the optional Osmo base, seen below.

Time-lapses with motion look much more impressive than ordinary ones. Again, you can see examples of these in the video below.

It can also do hyper-lapses: time-lapse video shot while moving. 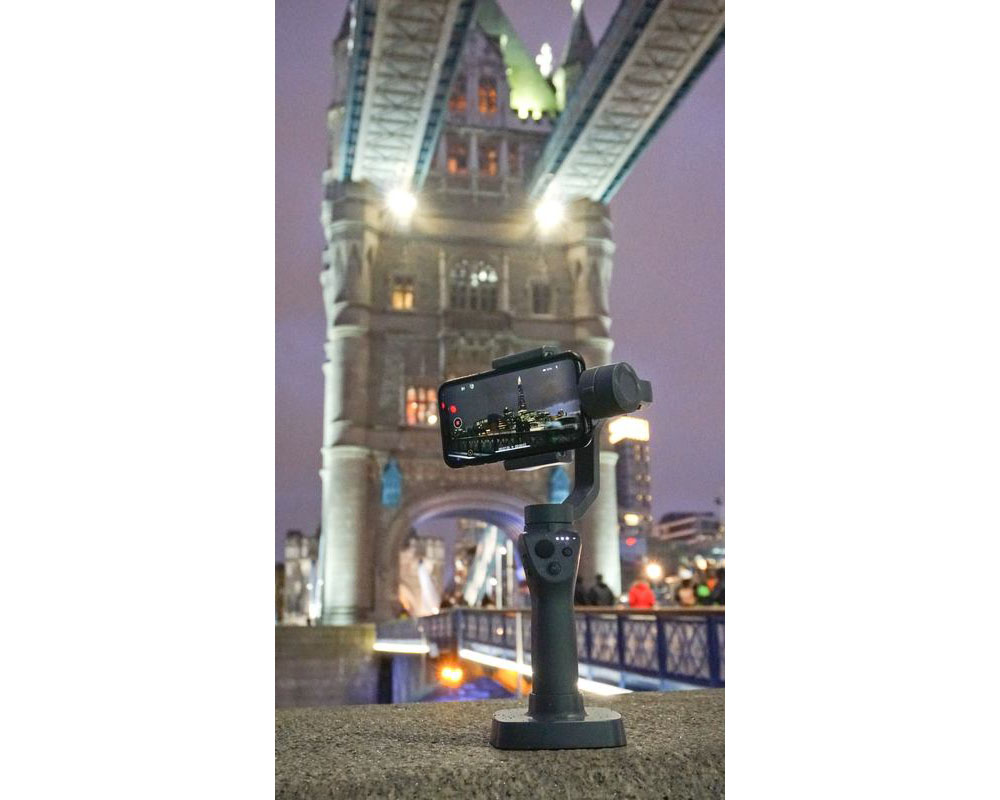 As a standard gimbal, smoothing out motion, I’d say that the DJI Osmo Mobile 2 would already be good value. At $129, that puts it within the $99-149 range you’ll typically pay for less well-known brands.

But add in the motion time-lapse capabilities and it becomes fantastic value. You can easily pay hundreds of dollars for dedicated devices that are much less portable and also harder to use. With the OM2, it’s a built-in feature controlled by the app, and the UI is totally intuitive.

And as a bonus, the ability to power or recharge your iPhone from the device means that you’re effectively getting a battery-pack thrown in free. All in, I’d say this has to be the best value iPhone accessory currently available.

Check out the video below to see what it can do.

The DJI Osmo Mobile 2 is currently available in Apple Stores and on apple.com and is coming to the DJI website. The older Osmo Mobile is still available, but typically at a higher price.