Another ‘1984’ ad factoid: the pre-test results were so bad the ad agency hid them from Apple 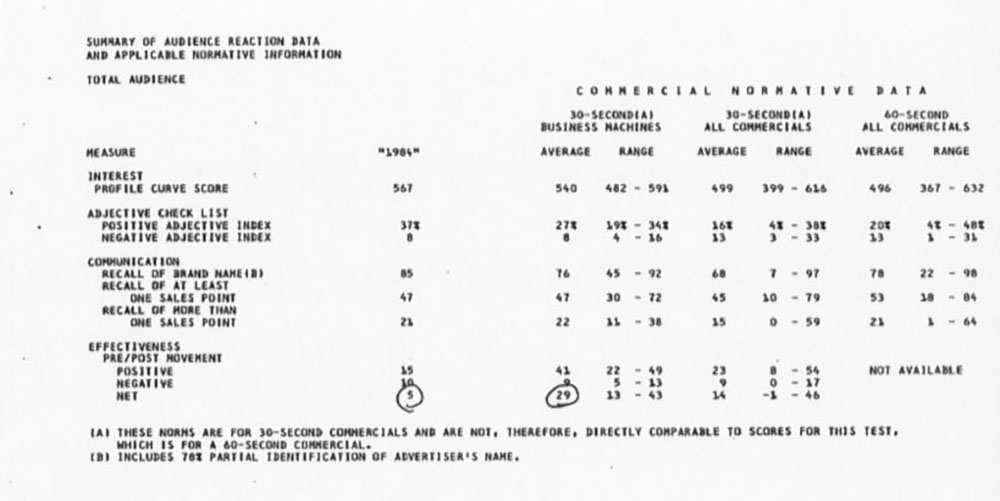 A couple of days ago, we got a look at the 14-frame storyboard behind Apple’s famous ‘1984’ ad for the Macintosh, and today a new piece of info has been revealed: the pre-test scores for the ad were so bad that the ad agency hid them from Apple …

Pre-tests are when an ad agency privately shows a proposed ad to some consumers in the target demographic to get their take on it. The ads are typically rated on a range of scales, such as recall of the brand and recollection of at least one message from the ad.

A common measure is to ask consumers how they rate the brand before and after watching the ad, and to measure the difference. You’re looking for a reduction in negative ratings and an improvement in positive ratings, to give a net positive score.

A typical 30-second business ad has a net positive score of 29.

Business Insider quotes Fred Goldberg, who managed the Apple account for Chiat/Day, recalling that this one didn’t get close.

He continued: “So that test went into my file drawer and never went to Apple.”

Jobs liked to make decisions using his intuition. “He’d never seen a strategy before. He was a guy who just looked at ads — he determined whether he liked it or he didn’t like it,” Goldberg said. “That was how the ad got approved or didn’t get approved, if Steve thought it was neat.”

The ad was aired only once on national television, and went on to generate millions of dollars worth of free publicity for Apple as national news networks reported on it.

Another factoid revealed by Woz a few weeks back in a CNBC video: Woz was so hyped on the commercial, he was ready to put up his own money to get it aired.

You can listen to the Household Name podcast about the ad on iTunes.