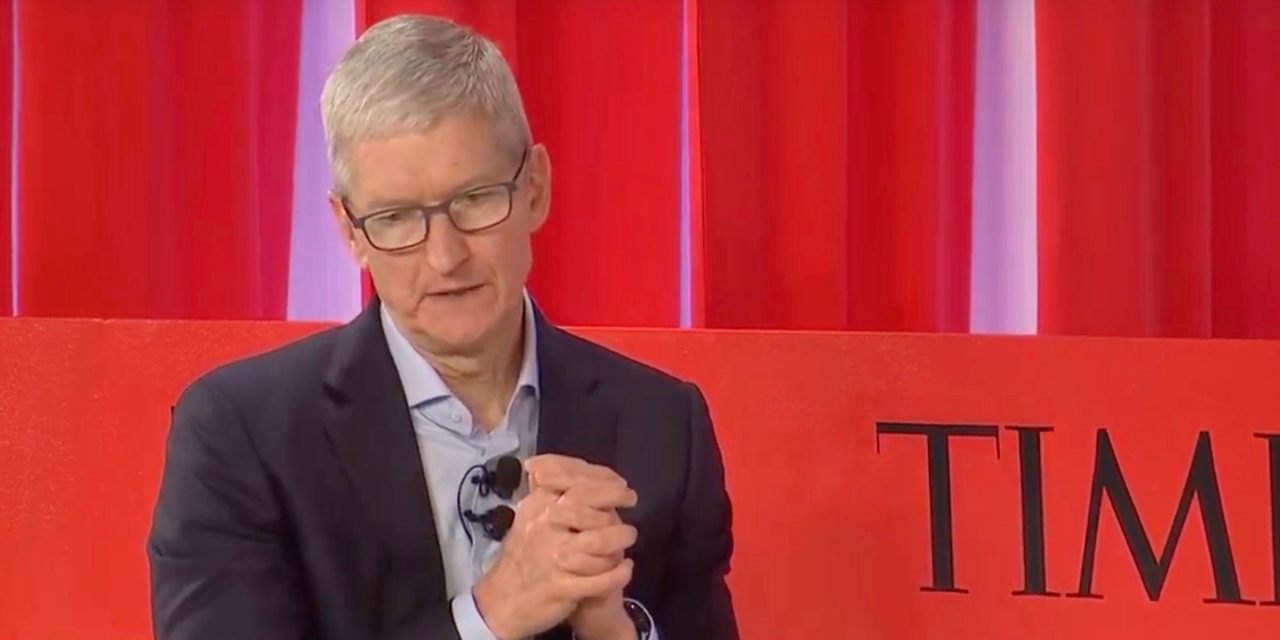 Today at the TIME 100 Summit, Apple CEO Tim Cook opened the event with an interview with Nancy Gibbs. The conversation ranged from topics like corporate values, politics, privacy, encryption, regulation in the tech industry, and more.

Gibbs started the interview by asking Cook about Apple’s values. He began by talking about why he believes corporations should have them.

And so, it’s not something unique for Apple, in a way, we’ve also had a set of things that were really important to us and we’ve felt said something about us. Part of that is the way we treat the environment, part of that is evangelizing and advocating for high-quality public education, and privacy, before anybody was talking about privacy this has been at the depths of who we are as a company.

Cook explained further that he sees today’s issues being solved by teamwork coming from the public sector, private sector, and academia.

I tend to think as I look at the world today, the issues that we face cannot be addressed solely by government, we should not be looking for government to solve all the problems. I think it takes the public sector, the private sector, and academia kind of working together to solve some of these huge problems. Climate change is not going to be solved by government, is just one example, right. So, we readily step up and participate in the conversations because we think that how we do what we do says as much about us as what we do.

Gibbs follow up with the tough question about following values in the currently polarized national and global environments. “How do you figure out how to avoid the minefields while still having an impact?”

I focus on what’s right, and decide that first. Then it’s more about, you know, what you do. The issues that we weigh in on, are issues we feel we have standing. And by standing I mean that we have a legitimate unique position or lens on the issue, we have something of value to say that we’re not just a talking head, right, that we’re not just giving an opinion so to speak.

When it comes to acting on its values, Cook said that Apple focuses on policies, not politics.

We focus on policies, not politics, we do not focus on politics and I recognize that everything kind of, unfortunately, tends to break down in that way. But we focus on the policy itself, not the politics.

You know this probably not known to a lot of people in here, but Apple doesn’t have a PAC (political action committee). Apple’s probably the only large company I would think that doesn’t have a PAC, I refuse to have one because I think it shouldn’t exist.

I think that people that should be able to donate are people that can vote, right, and we should set a limit about what that is… and it should be transparent. I never have donated any money to a PAC personally, every donation I’ve ever made has been public.

He further highlighted that Apple donates to “zero” to candidates.

Cook shared some of his concerns about what he’s seeing in the tech industry as a whole, and why he’s pro-regulation even though he has a free market mindset.

I think there are some serious issues with tech. I think that even though I’m deeply a free market person in mindset and believe that some unexpected things can happen in regulation, I think that we all have to be intellectually honest and we have to admit that what we’re doing isn’t working. And that technology needs to be regulated.

There are now too many examples where the no rails have resulted in a great damage to society. And when things are out in society and they don’t represent the true cost, then you have to do something about it. You either have to reflect it from a cost point of view so you’re valuing things properly, or you have to regulate it.

I’ve been on the regulation kick – which surprised even me – for a while because I didn’t see companies laying the basic rails in place and then refusing to step over those, so I think that’s where we are.

When Gibbs asked Cook how confident he is about smart regulation being passed for the tech industry in the US as opposed to “dumb or destructive regulation.”

I’m not confident (crowd laughs) is the short version of the statement. I think this is an example where Europe is more likely to come up with something. GDPR isn’t ideal, but GDPR was a step in the right direction. This is on the privacy side, obviously.

It may be that the sort of the center of gravity in moving the ball forward in privacy may be in Europe. And that it may eventually come to the US.

Tim Cook also touched on the San Bernardino case in which Apple fought against the US government to protect encryption, and how far the subject of privacy and encryption has come in the US. Notably, the DOJ concluded last year that the FBI misled Congress.

Because in the world where everything is totally open, people begin to guard what it is they will say. Think about where society goes if we’re afraid to tell each other our opinions, if we’re afraid somebody is listening, or watching, or monitoring, or we’re under surveillance. This is a bad thing inherently in a very broad way.

He went on to say that evidence shows the case was rigged and wished it would have gone to court.

I wish that case would have gone to court to be honest, it was dropped the day before. And  now after the inspector general reports have come out, our worst fears have been confirmed that it was a very rigged case to begin with. And so I think this was not the government’s finest hour. I have personally never seen the government apparatus move against a company like it did here in a very dishonest manner.

Cook also discussed education and Apple’s efforts around health and Apple Watch. Check out a portion of the interview below: