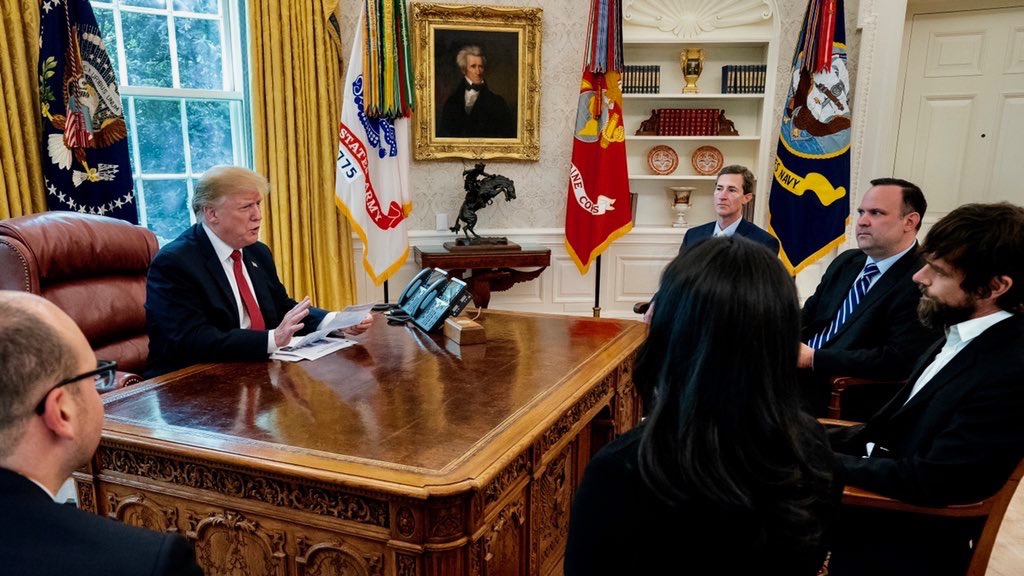 After reporting strong Q1 earnings this morning, Twitter CEO Jack Dorsey this afternoon met with President Trump at the White House. The goal of the meeting was to talk about “protecting the health of the public conversation” ahead of the 2020 elections, Twitter said in a statement.

Twitter says that meeting was initiated by the president, who has expressed frustration with the social network in the past. Trump has accused Twitter of playing “political games” and silencing conservatives on multiple occasions.

The Washington Post offers new details on the meeting, explaining that Trump spent a “significant portion” of the meeting complaining about his follower account on Twitter. Trump also reportedly noted that other conservatives had likewise experienced a drop in followers:

A significant portion of the meeting focused on Trump’s concerns that Twitter quietly, and deliberately, had removed some of his followers, according to a person with direct knowledge of the conversation who requested anonymity because it was private. Trump said he had heard from fellow conservatives who had lost followers as well.

The actual answer to Trump’s concerns is that follower counts on Twitter can vary wildly as the social network removes spam accounts. If Twitter removes a large chunk of spam and bot accounts, many Twitter users will notice a loss in followers. Dorsey reportedly stressed this point during the meeting, explaining that even he, as Twitter CEO, had “lost followers as part of Twitter’s work to enforce its policies.”

Ultimately, Twitter said in a statement that the meeting served as a way to discuss protecting the public conversation:

In a statement, Twitter said the meeting— initiated by the president — focused on “protecting the health of the public conversation ahead of the 2020 U.S. elections and efforts underway to respond to the opioid crisis.” Twitter partners with the federal government on a program to encourage Americans to dispose of prescription drugs they no longer need to prevent against abuse.

“The best thing ever to happen to Twitter is Donald Trump.” @MariaBartiromo So true, but they don’t treat me well as a Republican. Very discriminatory, hard for people to sign on. Constantly taking people off list. Big complaints from many people. Different names-over 100 M…..

Great meeting this afternoon at the @WhiteHouse with @Jack from @Twitter. Lots of subjects discussed regarding their platform, and the world of social media in general. Look forward to keeping an open dialogue! pic.twitter.com/QnZi579eFb