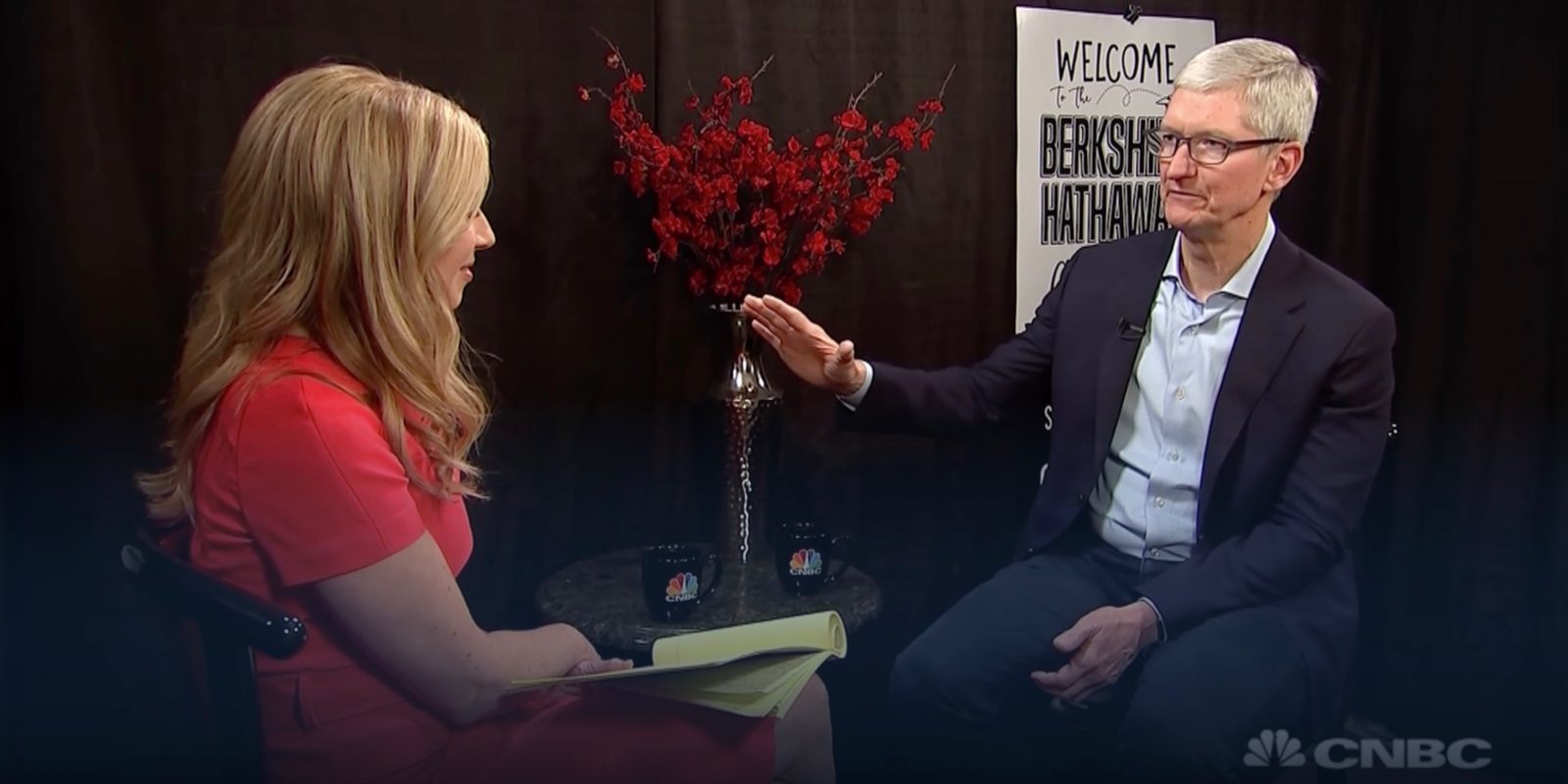 CNBC has published its full interview with Apple CEO Tim Cook that covers a wide range of topics. Some interesting tidbits include a story about how Cook first met Warren Buffett and what advice he asked for, what topics at Apple create debate, and whether Cook has a nemesis.

We previously learned from this interview that Apple has purchased 20-25 small companies in the last six months. Now the full transcript and video detail all that Cook shared in this sit down with CNBC’s Becky Quick during Berkshire Hathaway’s annual shareholder’s meeting, which saw attendance of over 40,000.

Cook was first asked about when he initially found out Buffett was investing in Apple:

Well, I found out probably like you did. Which is the 13F gets filed, and somebody tells me about it, and I went, “Oh, this is really cool. Warren Buffett is investing in Apple.” You know, we welcome all shareholders, but we run the company for the long term. And so the fact that we’ve got the ultimate long-term investor in the stock is incredible because our interests are aligned.

When asked about Apple’s share buybacks, Cook mentioned the first time he met Buffett which was in 2012 when he was looking for advice on the topic:

You know, this is a funny story a bit, is back in 2012, I’d been in the CEO spot maybe a year or so. We had a growing amount of cash. I think we had just crossed the $100 billion mark, if my memory is correct. And I was getting lots of input from a lot of different people, as you can guess.

And when I don’t have experience in something, I always make a list of the people that I think are the smartest people that I can contact to talk to them and get advice. And Warren was on the top of the list. As you can imagine, I’d never met Warren before. And so I get his number. I call out into Omaha. And I’m think — I wasn’t sure he’d take the call. You know, I’m just sort of calling outta the blue. He doesn’t know me from Adam. But he took the call, and I had a great conversation with him. And that was the first time that I’d met Warren.

And he was very clear to me. I still remember it. He said, he goes, “Let me just cut through it. If you believe your stock is undervalued, you should buy your stock.” And I thought that was just the simplest way of looking at it. So here’s what we do is, we first and foremost take care of our people, and we take care of the company and the future of the company. And we’ve been investing a ton in both this country and some others.

Following Apple’s latest March earnings call the company announced it will repurchase another $75 billion worth of its shares.

Another interesting response came after Becky Quick’s question about whether Cook felt he had a nemesis. She gave the example of Steve Jobs and Bill Gates being “frenemies.”

He further explained that at the end of the day he and Apple focus on customers over the competition.

We compete in the hardware space with Samsung and Huawei and many other prominent Chinese companies, in particular. We compete in the PC space with Dell to H.P. to Lenovo. And so each one of these markets we’re in has a significant number of competitors. But … I don’t fixate on the personalities or the company. We focus on the customer, and always ask ourselves, “What more can we do for the customer?” You know, and so that’s how we look at it.

Quick also asked Cook about a topic at Apple that has caused debate. He responded with general topics that the company sees lively debate, so she refined her question to ask about a past topic that brought about some internal controversy.

Well, there was a healthy debate about going into the watch space. Right, a very healthy debate. And about what it could eventually do for people, and how much emphasis to place on the health and fitness side of that. You know, where to put the relative balance.

You could imagine, there’s an incredible set of features in the watch just to do things like curate when you’re interrupted, and people are now taking calls on them. And sort of the things that you would think is part and parcel to the iPhone, but in a curated manner. And, or you could, to put the emphasis on fitness and health and so forth, and we’ve elected to do some of this in a great way. But we put an enormous amount of energy in the health and-fitness and wellness side as well. And that was a new area for us. And so a healthy debate should have happened, and it did.

The interview also covers topics like privacy and the status of tech industry, Apple’s mission to enrich people’s lives, and more. Read or watch the full interview at CNBC.