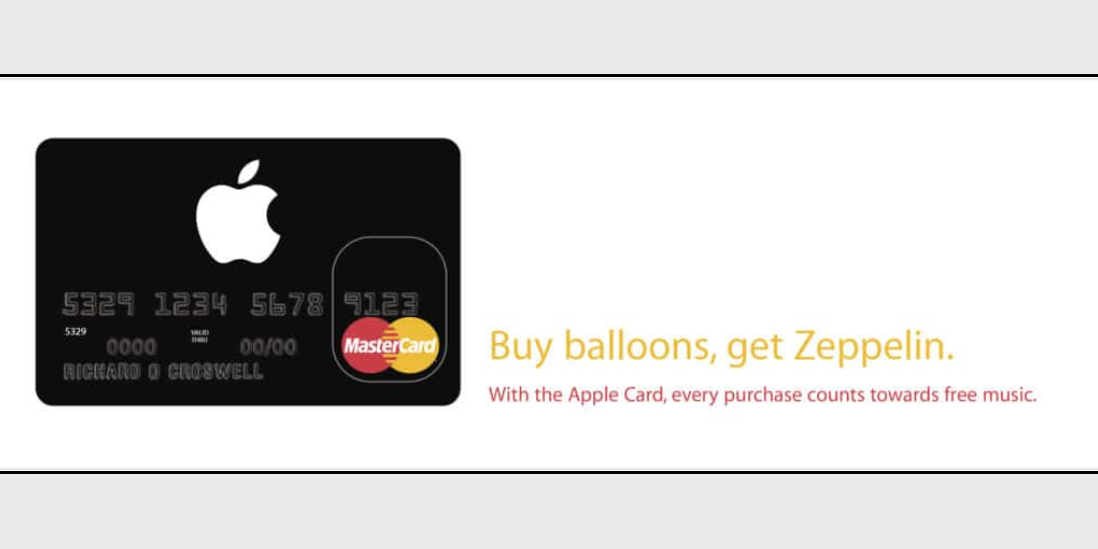 Apple announced Apple Card at its March services event with the draw of daily cashback as rewards. In a blog post, former Apple creative director Ken Segall reveals that Apple is no stranger to the credit card idea. In fact, in 2004, Steve Jobs / Apple was working on an iTunes credit card. The idea: spend money, get free music.

In 2004, back when Apple’s success was predicated on iTunes and the iPod hardware lines, Segall says that Jobs had embarked on a credit card project.

Customers would earn ‘iPoints’ for every purchase which could be used to acquire free music from iTunes.

Segall shares early creative work on the 2004 era Apple credit card in the post. Apple would use tag lines like ‘Buy balloons, get Zeppelin’ or ‘Buy lipstick, get Kiss’.

Interestingly, Apple was working with Mastercard on this 2004 project. The 2019 Apple Card, set to launch this summer, is also in partnership with Mastercard (and Goldman Sachs). Segall says the 2004 card never came to fruition as Apple could not negotiate the terms it wanted.

Since then, Apple never committed to launching its own brand card but it has partnered with companies like Barclaycard with a credit card featuring Apple-centric rewards.

The new Apple Card was a surprise hit in the aftermath of the March event. Apple Card is focused around contactless Apple Pay transactions using the iPhone, but the company announced it will also ship its own physical card made of titanium. Here’s what it looks like.

Apple Card will be available in the United States later this summer.