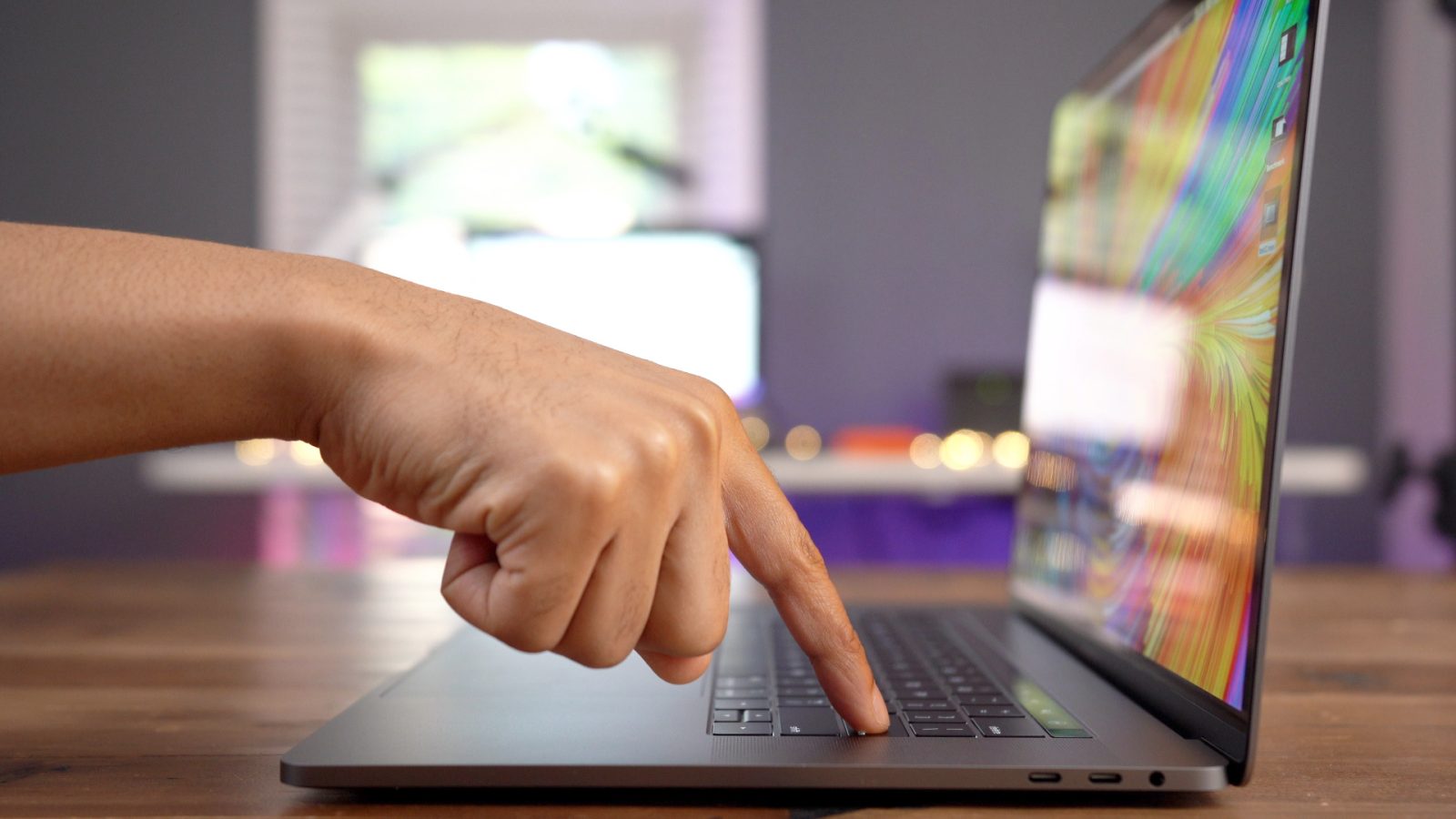 As we await Apple’s full-on redesign of the MacBook Pro, hopefully with a rethought keyboard in tow, Apple surprised us with another spec-bumped MacBook Pro release alongside the launch of the new 23.7-inch LG UltraFine Display.

In light of the ongoing keyboard issues, it would be all too easy to criticize Apple for releasing yet another MacBook with a slightly-modified butterfly key switch design. The criticism is well-deserved given the history of the keyboard issues, but I also think it’s worth looking at the positive aspects of this release.

Just because its brand new fully-redesigned MacBook Pro hardware with a rethought keyboard isn’t ready, doesn’t mean that Apple has left the existing MacBook Pro lineup to stagnate — something it would have had no problem allowing to happen in the past. Instead, Apple continues to issue updates as they become available from key partners.

For example, Intel’s new 9th-generation i9-9980H and i9-9980HK CPUs just launched this quarter, and Apple wasted no time updating its MacBook Pro with the new 8-core chips. This release, along with last November’s Radeon Pro Vega spec-bump update, shows that Apple is taking the idea of catering to professional Mac users seriously.

The 2019 MacBook Pro is the absolute definition of a “spec-bump” upgrade. Its new Intel Core i9 8-core processor option will appeal to users in certain lines of work — compiling code, encoding video, editing video — where having a couple of extra cores provides real benefits, but it’s not compelling enough for most users to consider selling their current MacBook Pro in order to upgrade.

Special thanks to iFixit for sponsoring 9to5Mac on YouTube. Get your iFixit Repair Kits today: http://bit.ly/2Mg73pw

If you plan on buying a 15-inch model, despite the possible issues with the keyboard, then I recommend going for the 8-core version if you can afford it. It wasn’t that long ago when a quad-core CPU was all you could get in any Mac, desktop or otherwise, so to see an 8-core MacBook Pro is pretty great. 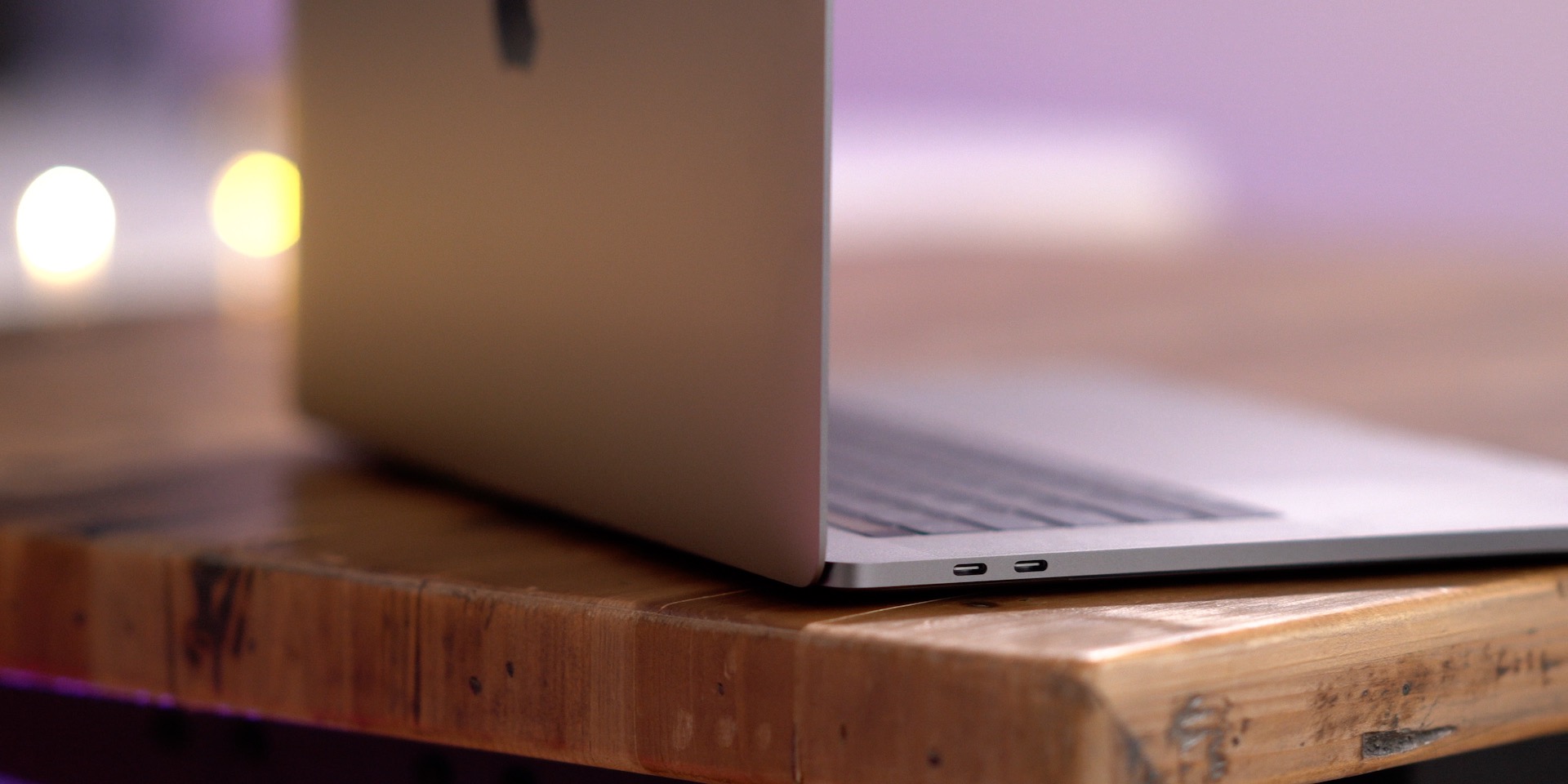 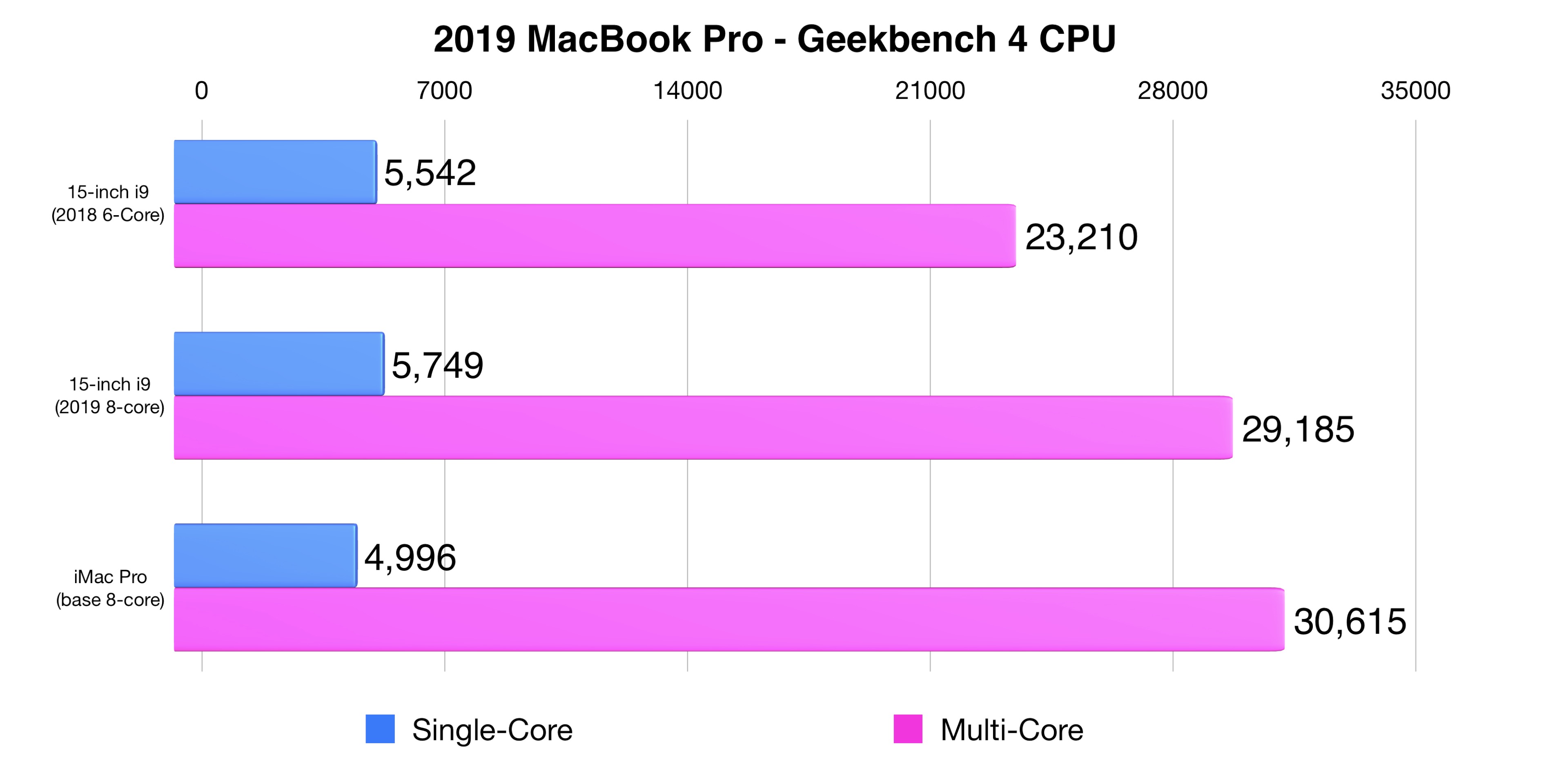 Although throttling will always play a role in space-constrained laptops, I find that the CPU in the 2019 MacBook Pro stays at or above its base clock speed while under load. Of course, it won’t be able to turbo boost for extended periods of time, but that’s to be expected. 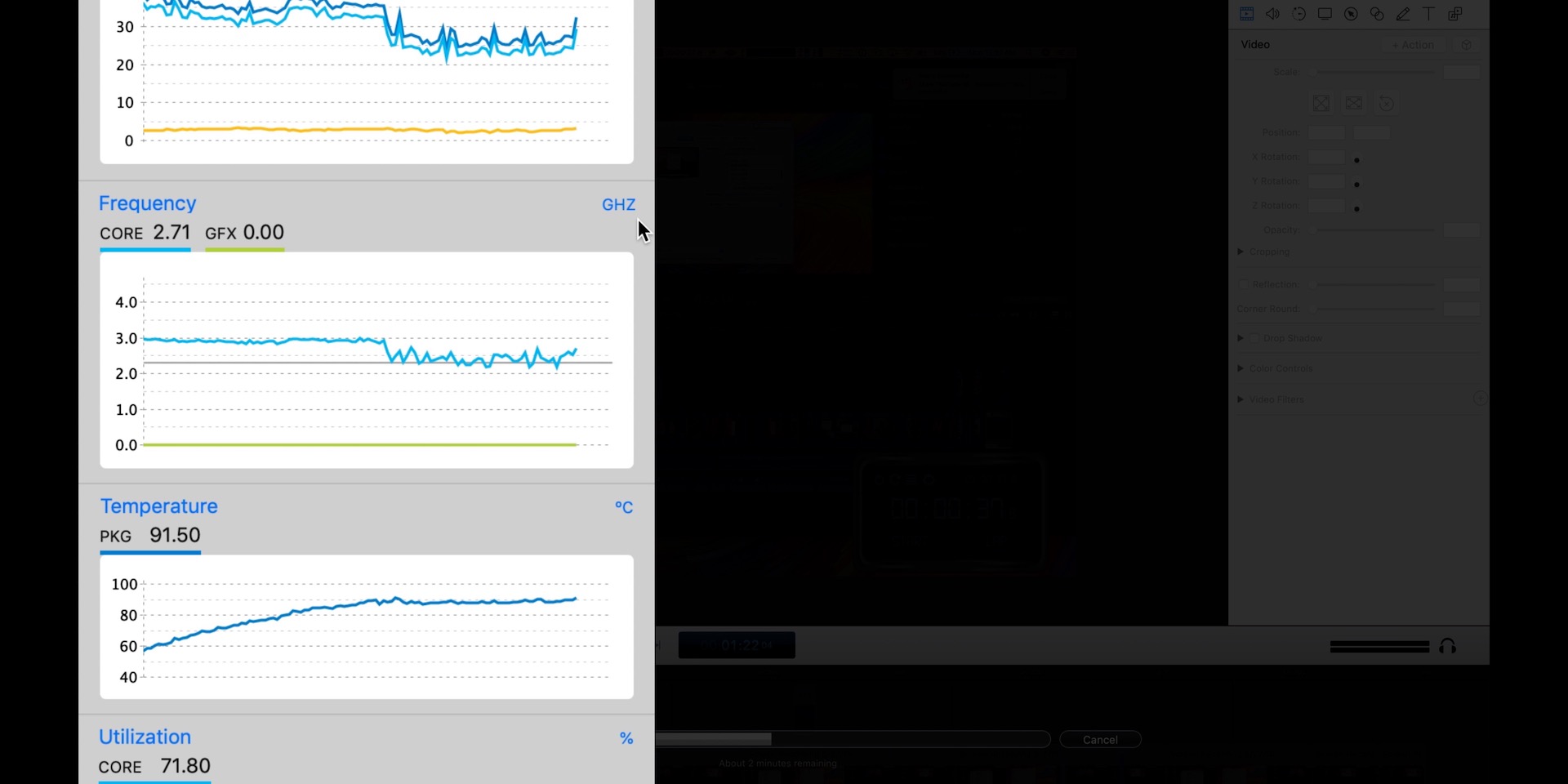 Nevertheless, if you regularly use multithreaded applications that can take advantage of multiple cores, then real benefits can be derived from this upgrade. When coupled with one of the high-end Radeon Pro Vega GPU options, you can expect the machine to live up to its billing as the fastest Mac laptop.

This update also includes a modified keyboard that uses new materials. Apple says that the updated keyboard in the new 2019 MacBook Pro — its fourth since the butterfly key switches debuted on the lineup in 2016 — should prove to be more reliable. 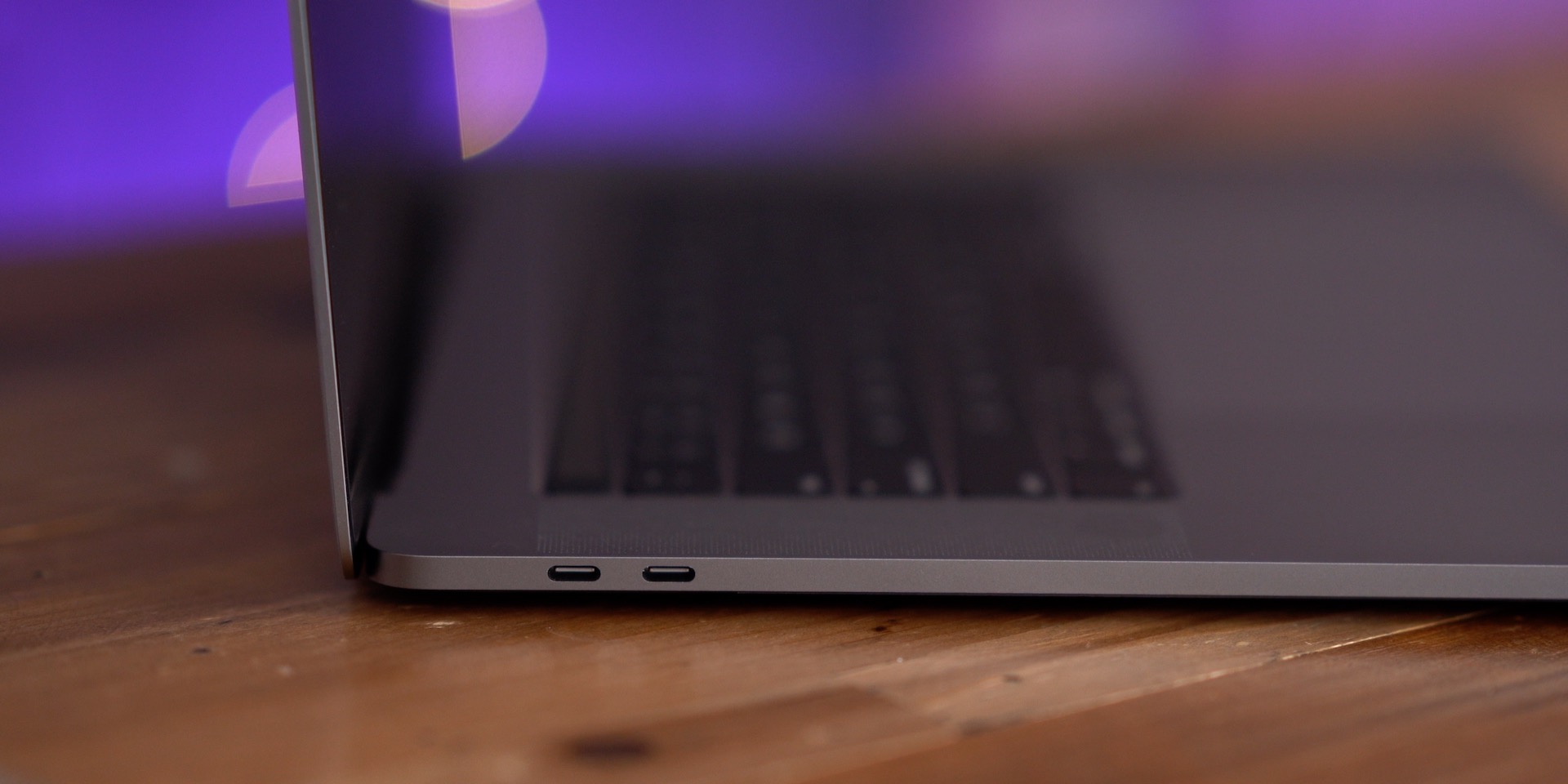 Although Apple is vague about what the new keyboard update entails, the folks over at iFixit have performed a 2019 MacBook Pro teardown to reveal the differences between it and its predecessor. According to iFixit, the updated keyboard includes new membrane covers and tweaked dome switches.

The updated membrane covers, which Apple introduced in the 2018 MacBook Pro refresh to dampen sound and help mitigate debris ingress, are now transparent, smooth, and made out of a nylon polymer. iFixit also found that the surface finish of the dome switches used for detecting key presses “may be using a revised heat treatment, or alloy, or possibly both.” 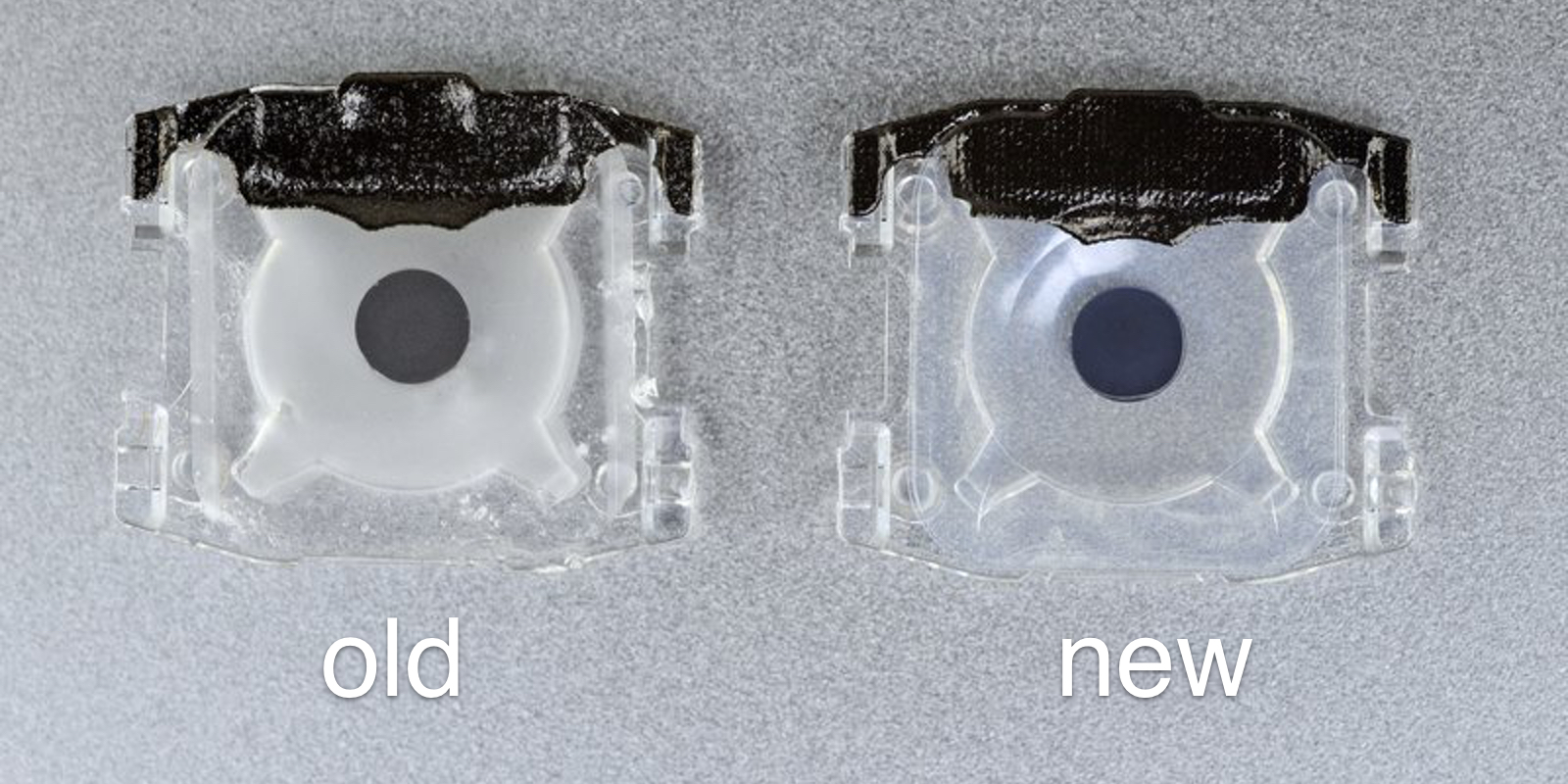 In other words, this keyboard update is along the same line as the keyboard updates we’ve seen in previous Apple laptop iterations. Unfortunately, those updates have failed to fully fix ongoing problems that users have experienced with double and missed key presses.

I’ve been experiencing these issues since the butterfly switches were introduced in the very first 12-inch MacBook in 2015, and here we are, several years later, still discussing the issue. It’s telling that Apple makes no mention of the improved keyboard on its MacBook Pro product page, or its press release for the updated 2019 model, although it did acknowledge the issues with the Keyboard Service Program that it launched last year, of which this new MacBook Pro is already eligible for. 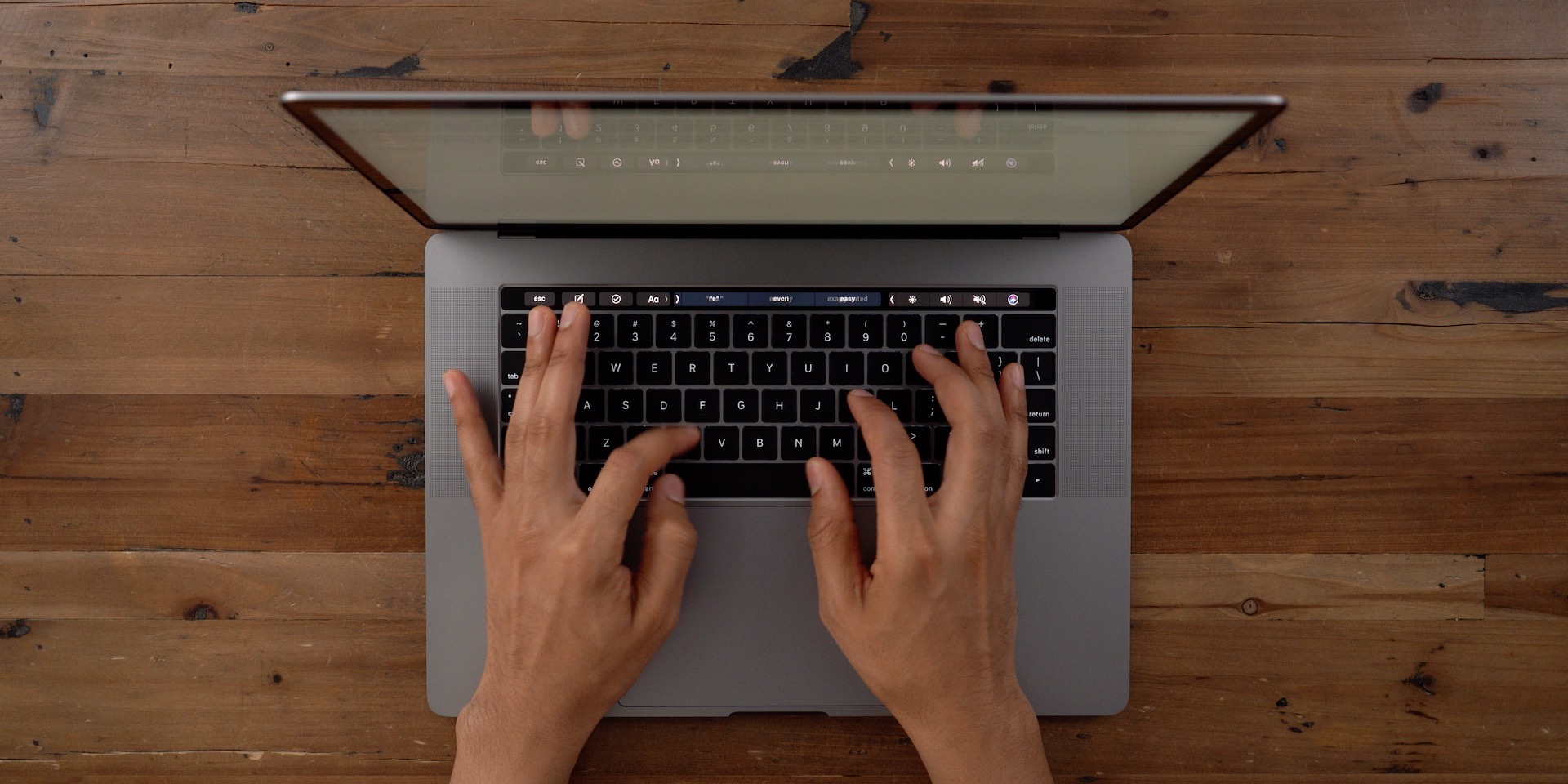 This acknowledges that Apple still isn’t fully confident about its keyboards and that users who purchase this latest MacBook Pro should not be surprised if similar issues occur in the future.

Apple’s statement to The Verge is particularly telling (emphasis, mine):

Apple says that it is using “new materials” in the switch mechanism that should significantly reduce the occurrence of double and missed key presses.

Translation: If you want a keyboard that is more or less guaranteed to not have the same problems that our laptops been experiencing for nearly half a decade, wait until the MacBook Pro refresh with a fully-redesigned keyboard. 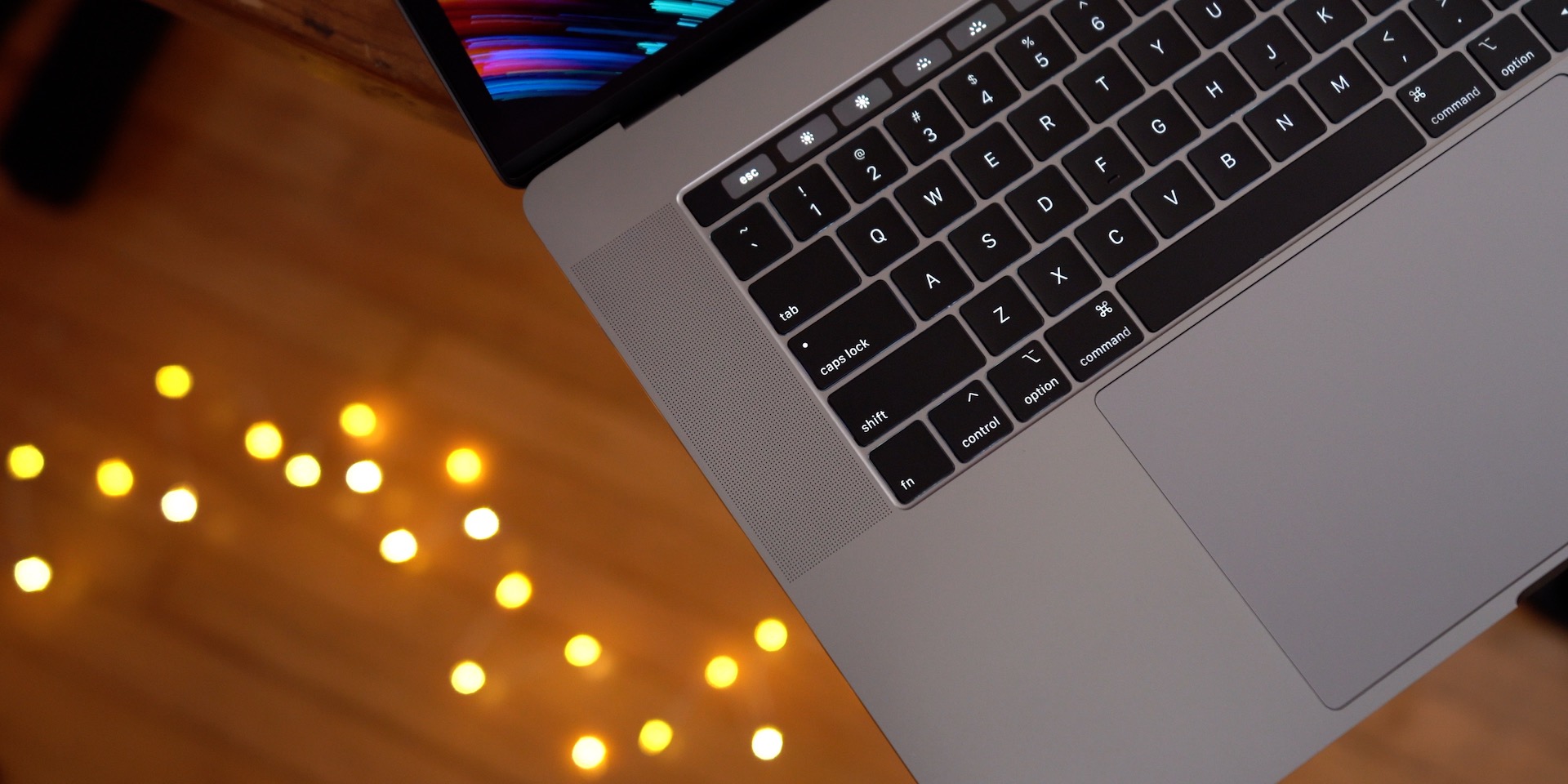 Granted, I haven’t used this keyboard long enough to judge it, but from what I can tell, it feels very similar to the previous butterfly switch keyboard revision. When comparing it side by side with my 2018 MacBook Air, I was hard pressed to notice any difference between the two. 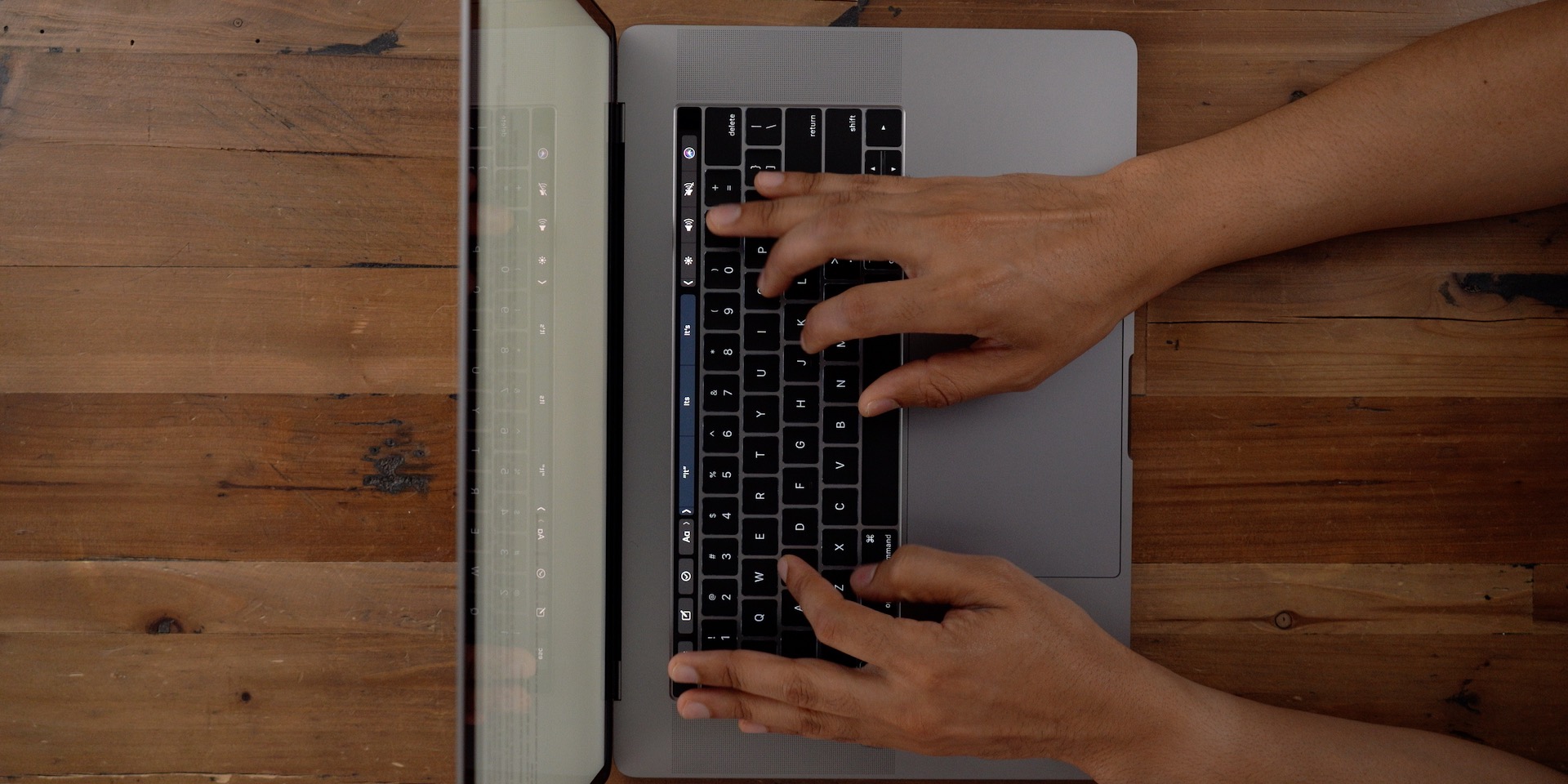 If this were the first or even the second revision to the keyboard, I might have a more optimistic attitude toward the prospects of it performing well over the long term, but I’m definitely taking a wait-and-see approach before declaring this keyboard revision a success.

If you’re not a fan of the modern state of MacBook Pro hardware, then this updated model — from a technology perspective — will do absolutely nothing to change your opinion. Both the 13- and 15-inch models feature the same form factor, I/O, and screen technology of their predecessors. It also features the same GPU, SSD, and RAM options that we’ve seen before.

And you know what? That’s okay. This is what the pro tech community has been asking for, after all — to keep the hardware updated periodically with faster components. Apple has delivered, ushering in a new 8-core processor for the very first time in its laptop lineup, and using the opportunity to tweak the keyboard in an attempt to make it more reliable at the same time. 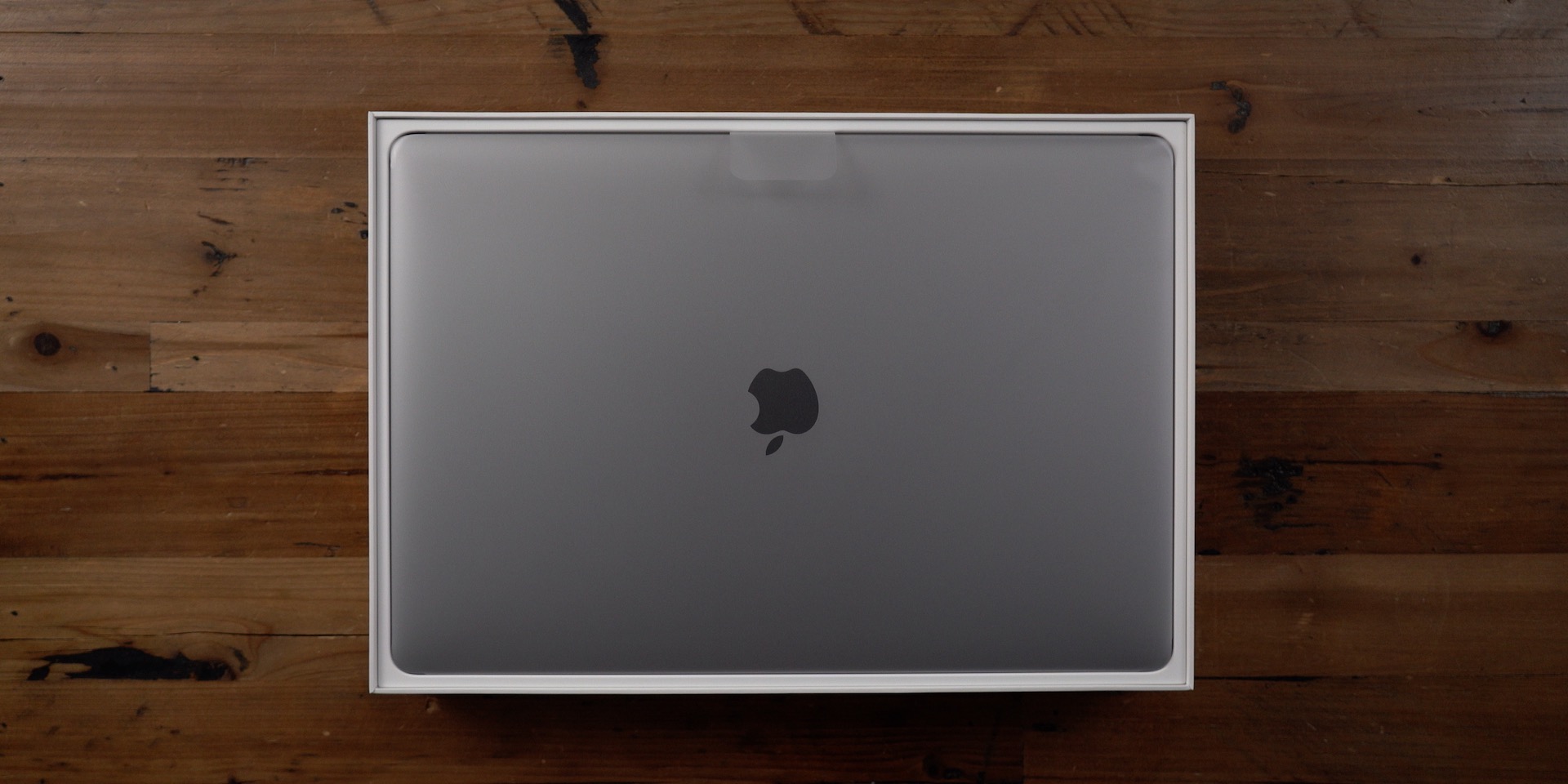 I have some definite issues with the current MacBook Pro design — I’m still not a fan of the Touch Bar, the keyboard has too little key travel, and I really want my SD Card reader back —  but I commend Apple for periodically providing users with better components instead of making them wait. 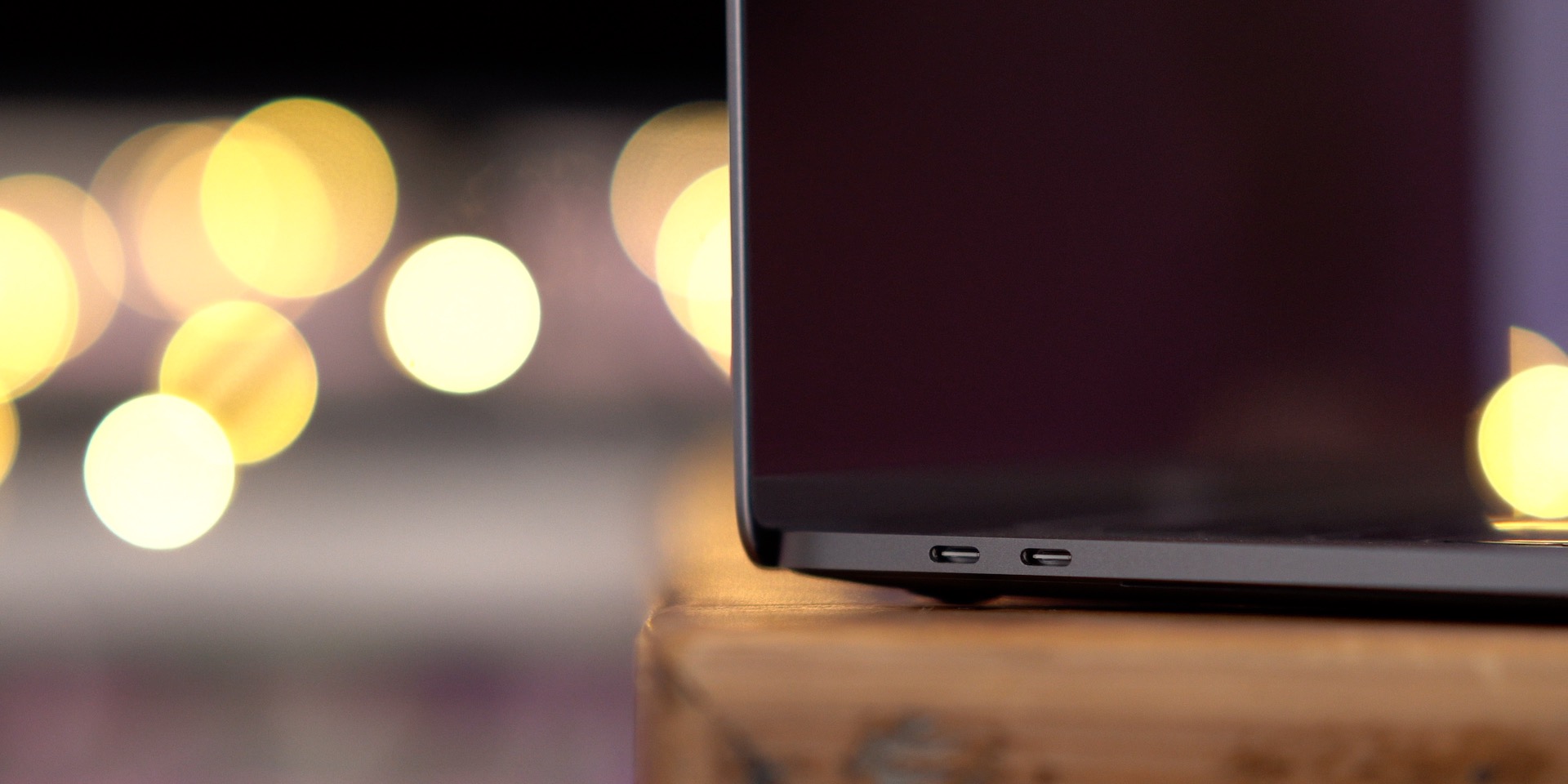 Given that the rumored 16-inch MacBook Pro redesign is not yet ready for prime time, it’s hard to fault Apple for attempting to improve on what’s already out there. That’s what professional Mac users have been asking for, after all.

What do you think? Sound off down below in the comment section with your thoughts.