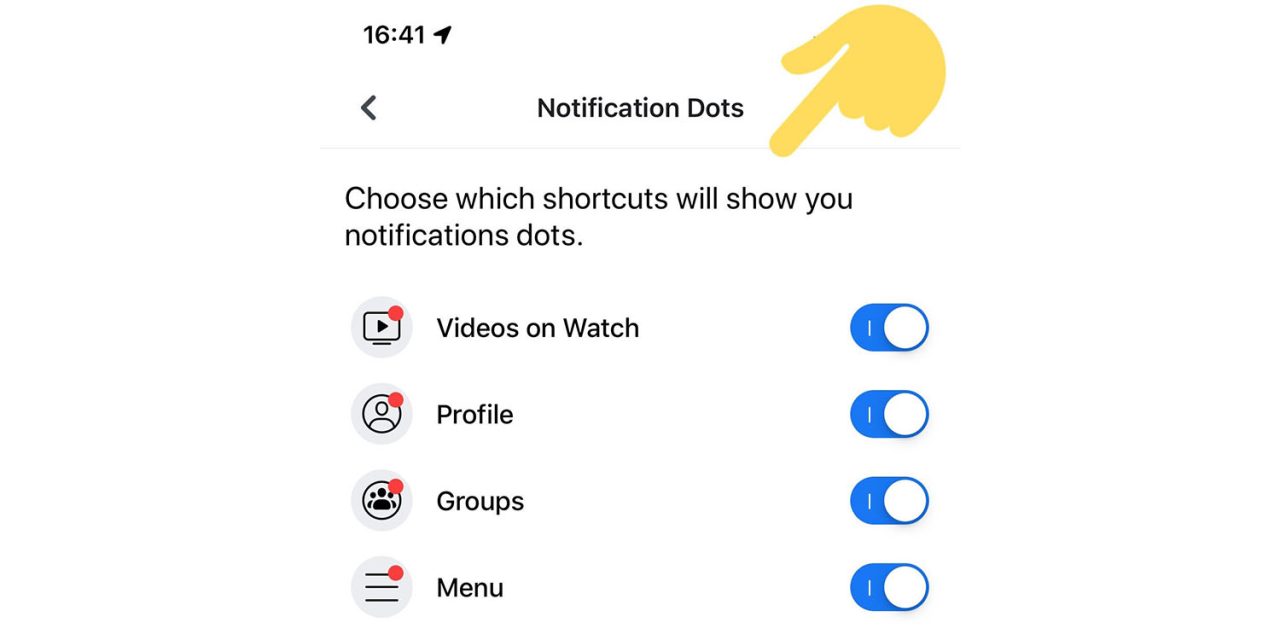 Facebook iOS and Android apps are testing a new option: the ability to turn off red dots at the bottom of the screen and throughout the app …

The Facebook app uses red notification dots to signal new content available in things like videos and groups, but many people find those annoying rather than helpful. Especially as you have to tap each in turn to remove it.

TechCrunch says that Facebook had initially used the dots to drive greater usage of the app, but now realizes that may not have been the smartest approach.

“It’s related to the work we’re doing with the well-being team. We’re thinking about how people spend their time in the app and making sure that it’s time well spent” a Facebook spokesperson tells me. Many people can’t feel settled if there are red dots begging to be tapped — a psychological quirk Facebook takes advantage of. The company seems to be realizing that its growth hacking can backfire if its pleas for engagement actually deter us from opening its app in the first place.

The Facebook Notification Dots setting was first spotted in its prototype form by reverse engineering specialist Jane Manchun Wong, hidden in the Android app’s code earlier this summer. Today, social media consultant Matt Navarra noticed the feature being publicly tested. Facebook now confirms to TechCrunch that this is a new global test that started recently on iOS and Android for a subset of users. “We are testing new ways to give people more control over the notifications they receive in the Facebook app” a spokesperson tells me.

Facebook plans to continue offering additional ways to personalize notifications so you don’t miss what’s important but aren’t drowned in noise. “People don’t necessarily want to see a notification on the badge [the in-app dots on tabs] if they’re already getting notifications in the jewel [the red counter on the Facebook app icon on your phone’s homescreen]” the spokesperson tells me

The social network apparently originally planned a ‘snooze’ option for the dots, but then decided an on/off toggle was better.

The counter for notifications has to remain, but all other dots can be switched off.

There’s also a hidden feature in Facebook many don’t know about. If you don’t want one or more of the options at the bottom of the screen, long-press them and you’ll be offered the option to remove the button. So even if you don’t yet have the option to turn off red dots, you can lose unwanted icons altogether.

Facebook doesn’t have the best of relationships with Apple, one of the social network’s execs recently describing Apple as an ‘exclusive club’ for the better off, and Apple had to ban a Facebook app for violating App Store privacy protections.