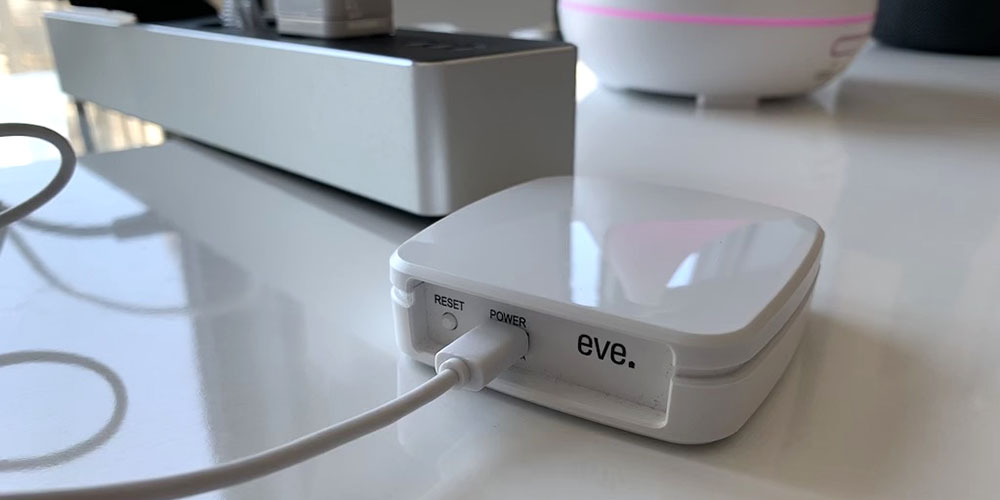 Eve (formerly Elgato) is expected to announce a HomeKit-compatible Bluetooth range extender in the next couple of weeks, with the product launch scheduled for September. It will be called Eve Extend, and work with a range of existing Eve devices …

Bluetooth smart home devices have the big advantage of not needing a hub, but their range can be limited. A Bluetooth range extender is a simple way to boost the range. It picks up Eve or HomeKit commands via WiFi, then relays them to the devices via Bluetooth.

It’s the same principle as the range extenders offered by Hunter Douglas with its window blinds.

Macerkopf got an early hands-on with the device, which it says is likely to be particularly useful for the Eve Aqua, the company’s HomeKit-compatible garden irrigation controller, as these are often situated some distance from the home.

With Eve Aqua, Eve Systems has been offering a HomeKit irrigation controller since last summer […] Eve Aqua communicates via Bluetooth. Now, depending on the size of a garden, Eve Aqua may be placed so that it can not connect to the iPhone or HomeKit Hub (HomePod, iPad or AppleTV) when needed. Do not worry, the irrigation works without active iPhone connection, as the watering times are deposited directly on Eve Aqua. So the device works self-sufficient.

Eve Aqua was launched in May of last year as a way of automatically watering gardens on either a timed schedule or via Home app or Siri control.

The Eve Aqua is a network-connected valve that fits over a hose; the valve can be opened or closed remotely with the Apple Home app, or Siri. As well as on/off, you can set an integrated timer to let the water run for 10 minutes before turning off, for example.

The hose could be pointed at your garden’s flower bed, or hooked up to your sprinkler system as is common in the US.

To avoid leaving water on indefinitely, Aqua has an unusual method of control, as we found when we tried it.

You can’t turn a sprinkler on indefinitely like you can a light bulb. Instead, sprinklers are tied to timers that you can set to last for up to four hours.

Timers are set to a specific duration by default, but you can customize the duration with any five-minute interval between 5 minutes and 4 hours. The max duration was initially up to 1 hour in the Home app, but increased to 4 hours after a firmware update in the Eve app.

Eve Aqua is available on Amazon, while the Eve Extend Bluetooth range extender will be available sometime in September. Pricing is yet to be announced.