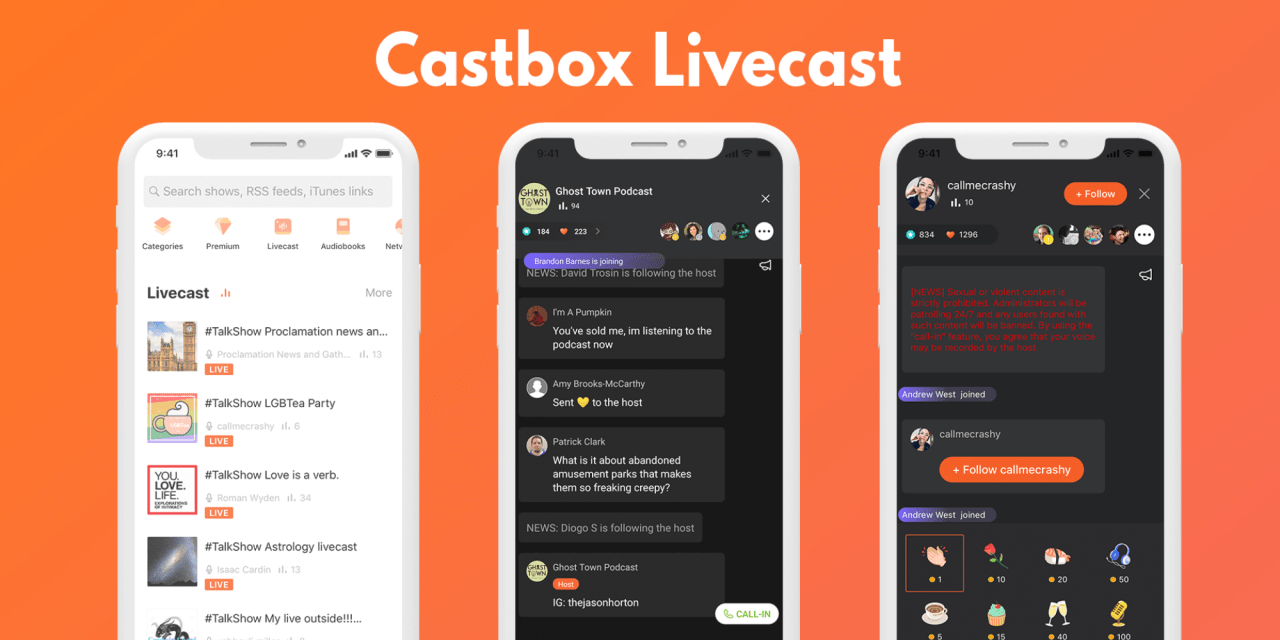 Castbox is a really interesting podcast app that I’ve been watching for a while now. The app offers what you expect when you think of an iOS podcast application, but Castbox wants to add their own spin on it. Today, they’ve announced the launch of Livecast. Castbox Livecast is a free audio streaming service that lets podcasters go live to their audiences with the tap of a button. Livecast is available on Castbox mobile and desktop apps, so users can join wherever they are.

The live streaming market certainly has existing players like YouTube and Twitch, but Castbox is the first to add it inside of a dedicated podcasting application. During a live session, listeners can ask questions, share opinions, and connect with other listeners. Livecasts can be public or private depending on the preference of the podcaster. Castbox Livecast supports unlimited listeners and up to eight simultaneous callers.

“Podcast listeners are already considered one of the most engaged audiences but podcasting itself has largely been a passive activity,” said Renee Wang, founder and CEO of Castbox. “As a dedicated podcast platform catering to power users, we’re introducing an interactive element that pulls the audience into the show to immerse them in audio content in an entirely new way.”

Castbox’s Livecast feature also includes a virtual gifting mechanism that lets listeners support their favorite podcasts. Users can purchase in-app currency to send hosts emoji-style gifts such as applause, roses, or a golden mic. Podcasters can then convert these gifts into cash that can be deposited via PayPal. I’ve argued that Apple should include an option inside of Apple Podcasts for donations as well.

Plenty of podcasters are using Patreon as a way to drive revenue for their shows. You can donate $X per show or per month, and they will give you rewards. The problem is the friction of hearing about the rewards system, and then signing up. Patreon supports RSS feeds, so plenty of podcasters publish bonus episodes as well.

All of this could be built into Apple Podcasts+. If I enjoy a certain show, I could see a “Join Apple Podcasts+” link on the screen. Joining Apple Podcasts+ (for $9.99 per month) would enable me to receive all of that show’s bonus content. The possibilities are endless (bonus episodes, email Q&A newsletters, etc.), but it would be an additional revenue stream for creators.

During the beta period, dozens of podcasters across many genres used the Castbox Livecast feature to host live “Ask Me Anything” sessions with fans. As part of the official launch, several popular podcasters will go live in the coming weeks.

The lineup of upcoming Livecasts include:

I know a lot of people get wary anytime a company breaks the mold of RSS style shows, but I think this is an interesting approach on how to expand options for podcasters and listeners. Creators can save these live sessions to upload back to their podcast feed in the future as well. Visit Castbox.fm to learn more about Castbox Livecast.