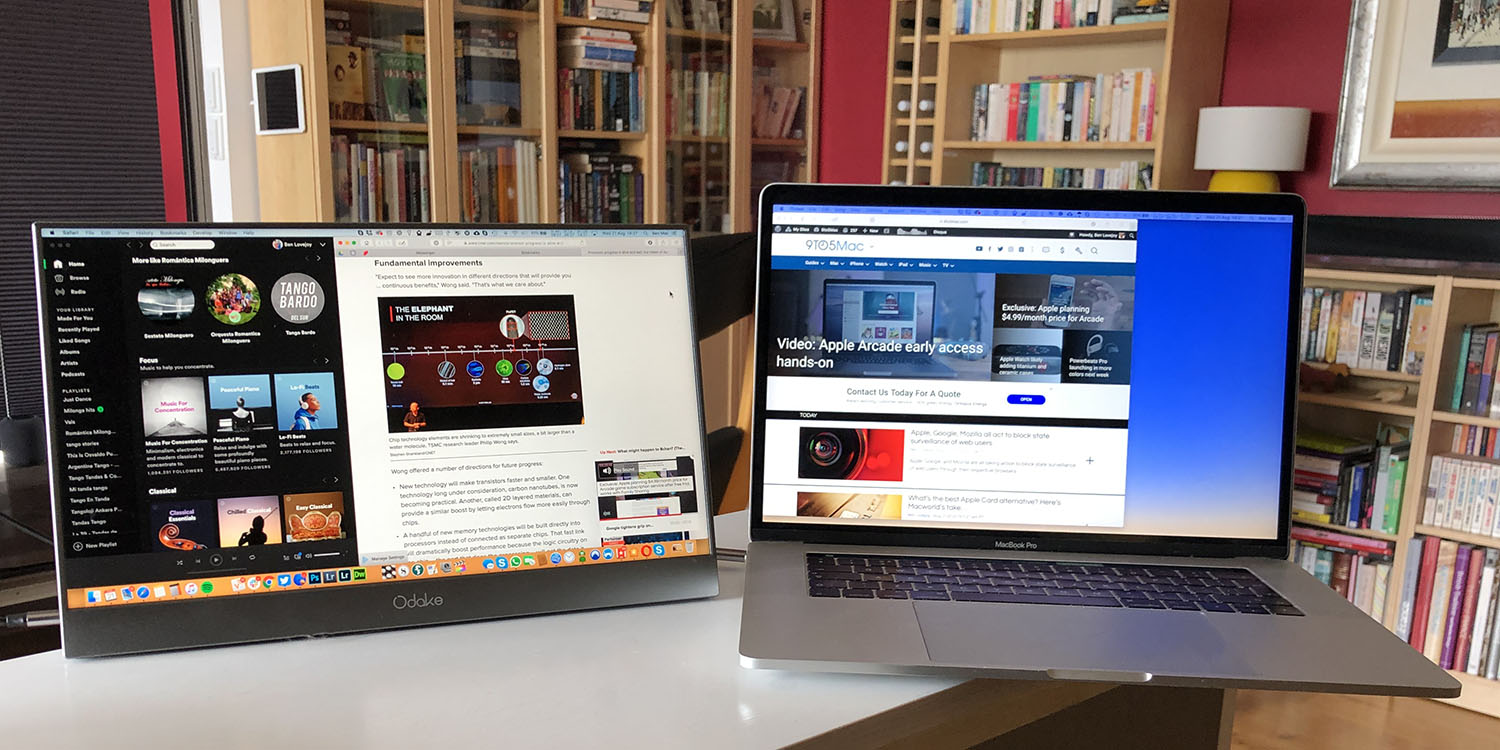 Update: I have since heard of a number of backers who have not received their monitors, and would therefore not recommend purchasing.

The BladeX Pro 4K portable monitor is similar to the Gemini I reviewed earlier in the year, though from a different brand: Odake.

It has quite a lot in common with the Gemini. It’s again battery-powered, for truly mobile use. The display is still 15.6 inches, and you again get a choice of a 1080p touchscreen version and a 4K model without touchscreen capability. You still get both USB-C and HDMI input, though Mini DisplayPort has been dropped.

But the BladeX has a sleeker design. Instead of the entire device being a half-inch thick, the display is now less than a fifth of an inch thick. The base is still a half-inch thick when folded, so you don’t really get any portability benefit, but there’s no denying the visual appeal of the far slimmer design…

I again opted to test the 4K version, which was again a fully functioning prototype. (I do think a touchscreen Mac could be occasionally useful, but it’s not worth sacrificing resolution.)

The BladeX has a sleek, modern look in gun-metal gray. The top and side bezels are really slim, while there’s a significantly larger chin at the bottom.

The finish is an attractive brushed aluminum in the same color palette as one of Apple’s many Space Gray hues.

The base folds down from the rear to form a stand. The angle is infinitely adjustable, from fully upright to fully flat.

On the left side of the base is one USB-C port for connecting to a Mac, a second one for charging, an HDMI input, and a headphone socket. On the right side are two MicroUSB ports and three multi-function buttons.

The whole unit feels light and slips easily enough into a travel bag.

That far slimmer design comes with one huge drawback: The 5000mAh battery has been replaced with a 3000mAh one. The previous model claimed five hours of use, while this one claims three. A problem with the prototype prevented me testing the five-hour claim, but I was able to test this one, and got only 1 hour 38 minutes. That’s a massive sacrifice of form over function.

However, as appealing as a battery-powered monitor sounds, the reality is that I always use them powered. If I go to the trouble of packing an external monitor, it’s because I expect to be using it for full working days, when I’d need external power either way. For me, the classic usage scenario is when I need to continue working while traveling, when I’m in a hotel room, so power isn’t an issue.

I’m a big fan of widescreen displays, and the 16:9 format looks better to me than the MacBook Pro’s 16:10. For someone with OCD tendencies, it’s slightly annoying that the monitor doesn’t line up perfectly when positioned next to the Mac, but that’s quickly forgotten in use, and the wider-format screen is more useful to me than a matching one.

I love the slim bezels top and side. The large bottom chin doesn’t feel obtrusive, but the logo slightly does. It made me appreciate the very subtle MacBook Pro lettering in the bottom bezel of the laptop.

The infinite adjustability of the tilt angle is very welcome. Hotels never seem to give much thought to the realities of working at their desks, with often uncomfortable chairs and poorly positioned power sockets. Avoiding reflections from lighting can be one of these challenges, so being able to tilt the display to suit is really handy.

In reality, though, none of this matters unless you are doing color-critical editing work. It doesn’t seem that many years ago that 100% or aRGB was considered a pro-quality monitor. Things have moved on, so pro photographers and videographers wouldn’t be happy with that now — but for everyone else, the quality is really impressive.

In terms of brightness, I found 7/10 was about the right level, which is roughly what I use on my Mac, so the theoretical maximum brightness level doesn’t seem to me to be reflective of real-life use.

MicroUSB is an odd choice for the USB 2.0 ports, but these are standard ones in terms of spec, so you’d just need the appropriate cables or adapters to connect to USB devices, which is a bit fiddly. My guess is that the company did this to save space. For me personally, I have no need to attach anything to the monitor.

The built-in speakers are very small, rear-facing, and definitely not suitable for listening to music. That said, they are good enough for most casual TV or movie viewing, but for a two-screen setup, I’d recommend using the built-in MacBook speakers.

One other nice thing about the HDMI port: you can hook it up directly to a camera, to use as a monitor during a shoot or for reviewing afterwards.

The 4K BladeX Pro I tested costs $309 on Indiegogo, while the non-pro 1080p touchscreen model costs $209. Pricing is broadly in line with other portable monitors already out there.

We of course have to add the usual crowdfunding caution here: not all projects deliver on time or at all, and it is possible to lose your money. That said, the company has a track record, the project is well-funded and it has working prototypes, so the risk ought to be low.

Having spent a fair amount of time working from hotel rooms, I can say without any doubt that a second screen is the biggest favor you can do for yourself in terms of productivity, and the BladeX Pro is a very nice display that is easy to pack.

That said, macOS Catalina and iPadOS 13 introduce Sidecar, allowing you to use an iPad as a wired or wireless monitor. Especially for those of us with a 12.9-inch iPad, that gets you a lot of the way there without any additional purchase.

Whether any external monitor makes sense, then, will depend on whether you have an iPad, what size it is, and how much the additional screen space is worth to you. But if you do decide that a dedicated external monitor is for you, the BladeX Pro is well worth a look.