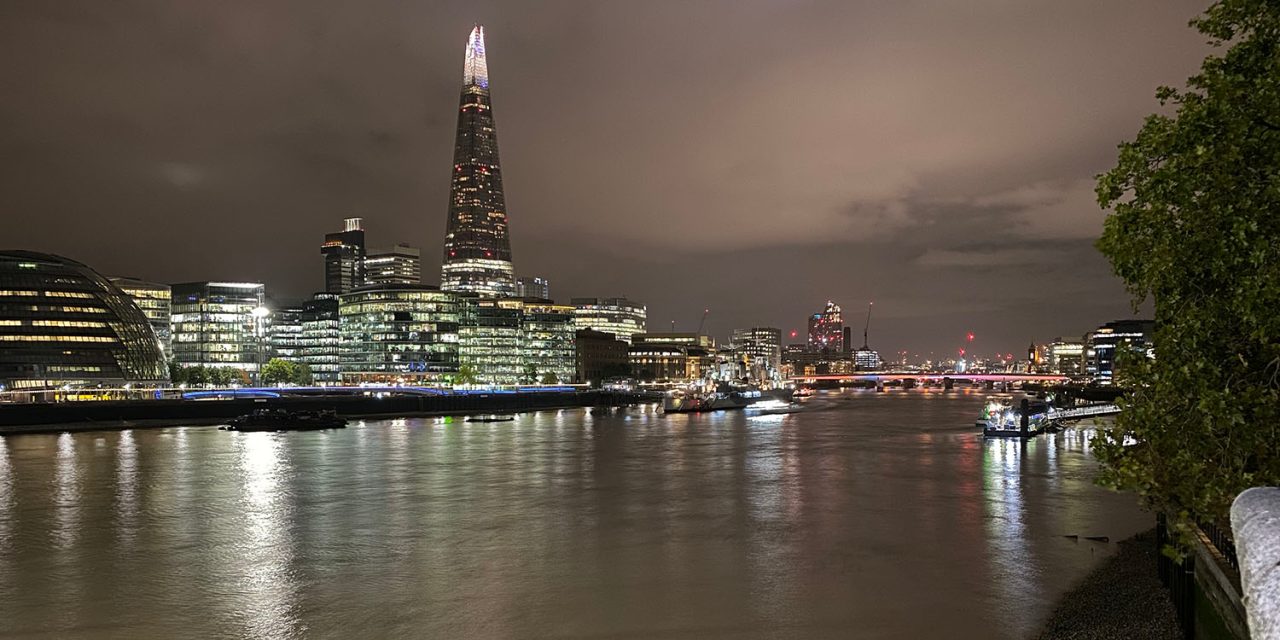 I had only a few minutes to play with the iPhone 11 Pro camera on release day, taking just a few hand-held iPhone night photos to test Night Mode.

But a couple of readers made a good point in response. Although the vast, vast majority of iPhone photos will be handheld, it wasn’t fair to compare the results against a DSLR or mirrorless camera when those were tripod-mounted 30-second exposures. For a fair comparison, I should also mount the iPhone on a tripod, and let it also use its longest-available (pseudo) shutter speed…

Of course, I live in Britain, famous for its variable weather, and we promptly got a solid week of rain and grey skies. But the weather did eventually cooperate, and I discovered that my first tests weren’t in fact all that unfair. Even on a tripod in manual mode, the longest exposure I was ever offered on the iPhone exposure-time slider was six seconds.

And with some night shots, the iPhone decided there was too much light for Night Mode at all, and took a normal exposure – like the lit fountain shot below, where it opted for 1/20th second. In some cases, you can manually activate Night Mode, but not if it thinks there’s too much light, as it did here. 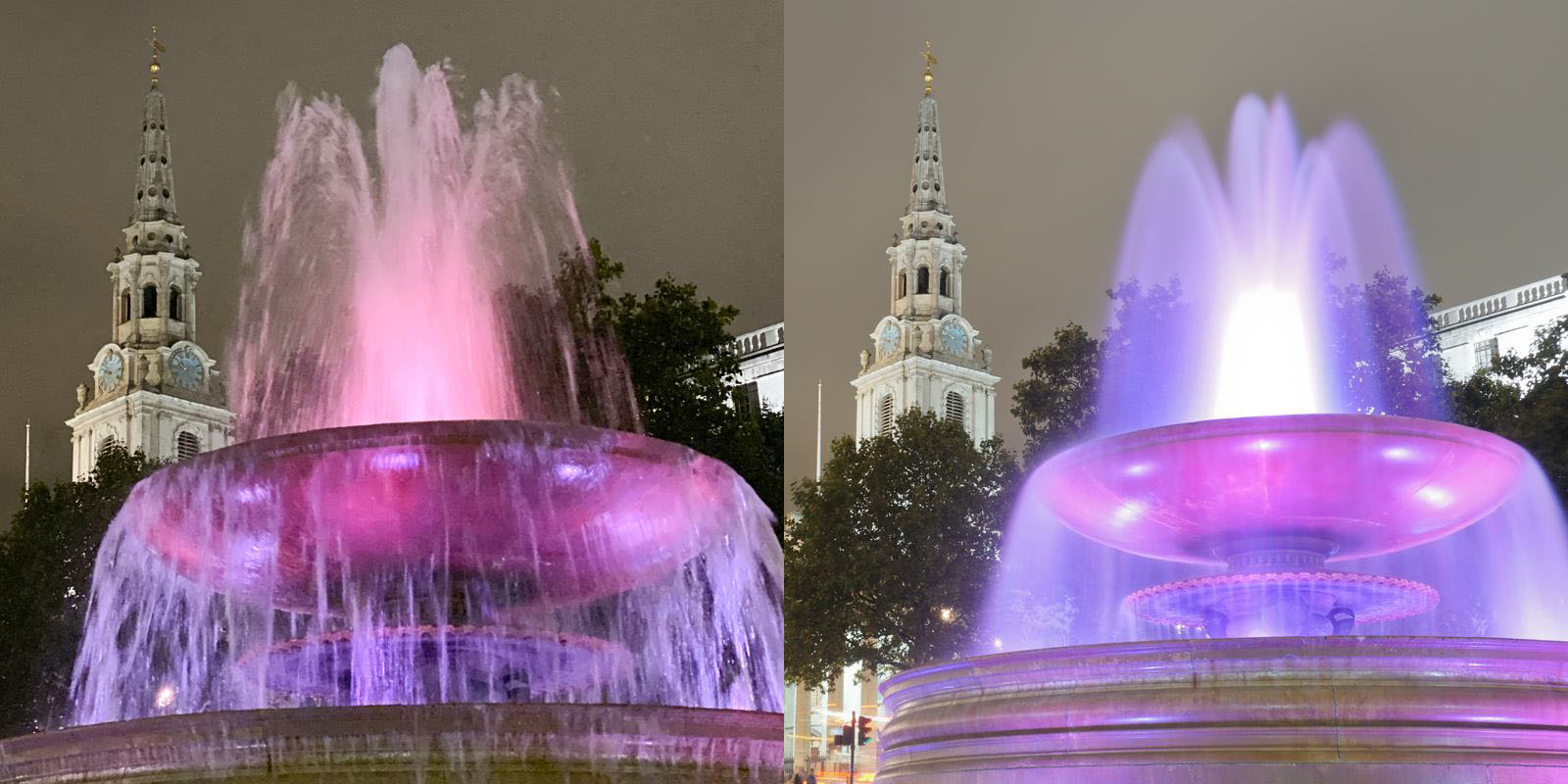 The same thing was true of the Thames shot at the top of the piece. Night Mode wasn’t available, and it shot at 1/4-second.

So, my limited testing to date suggests iPhone night photos have three limitations for the type of cityscape shots I take at night. First, six seconds is the longest exposure it has ever made available to me. Second, it won’t auto-activate if it sees plenty of light, which may just be in the foreground. Third, while you can sometimes manually activate it in these cases, not always, even if it is unequivocally night.

For all these reasons, then, the Sony will be accompanying me on my travels for this iPhone generation at least.

I was also able to confirm something else for myself. When you select the 2x lens at night, the EXIF data confirms that my iPhone was in fact using the 1x lens. So it was cropping digitally to get the result. Here, for example, we can see that the 2x image (shot with the 1x lens) is just as clear as the 1x version (I’ve taken full-height square crops from each for easy side-by-side comparison): 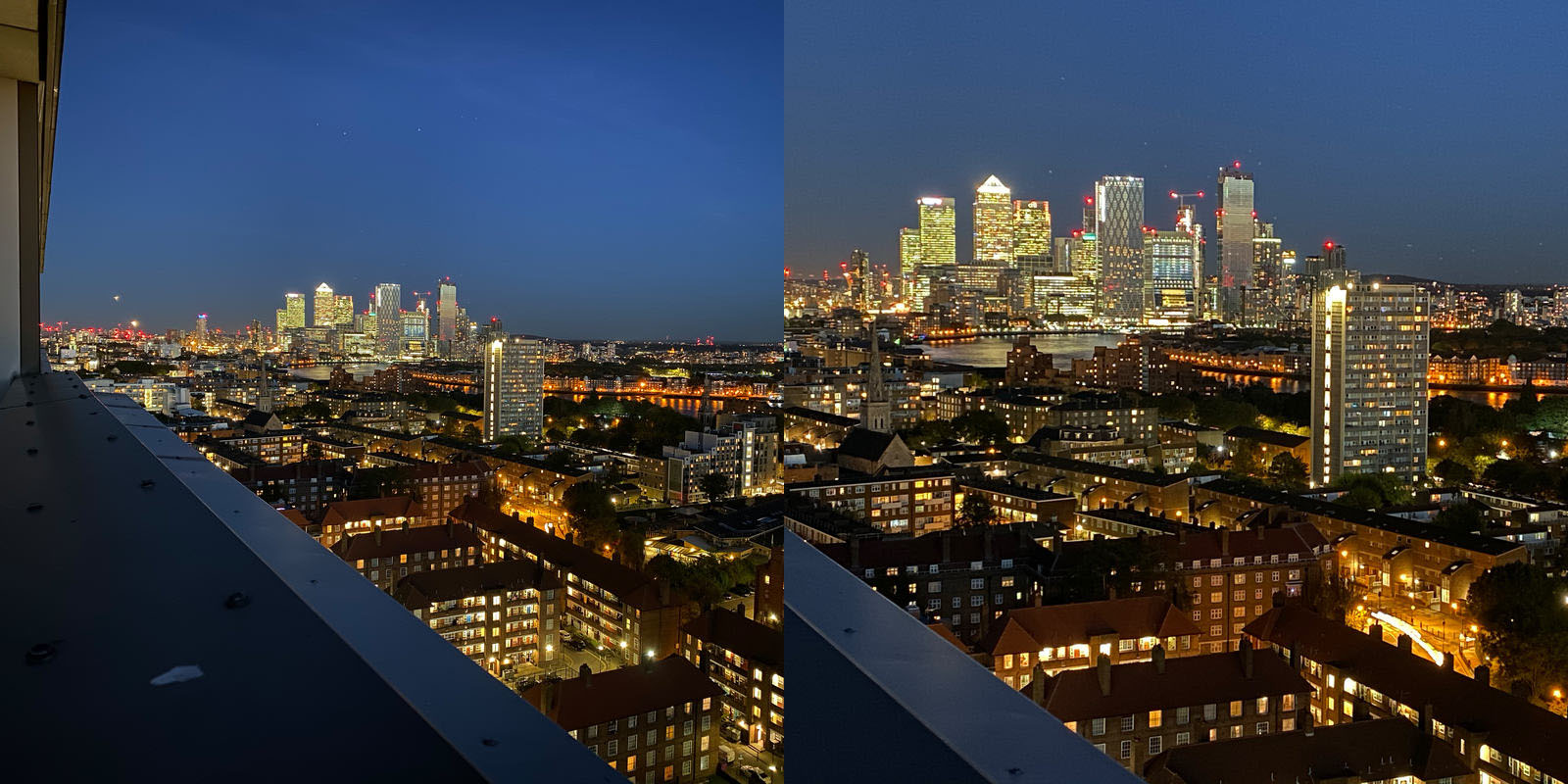 Again, 100% crops show the limits of the small sensor. This is not a substitute for a DSLR or mirrorless camera. But the standard is certainly good enough for daytime shots and most night-time ones when viewed digitally. The exceptions are when you want to specifically take advantage of a long exposure for things like light trails and smoothing water movement.

The ultra-wide lens is a non-starter at night. It can’t capture as much light to start with through the narrower-aperture lens, and the sensor doesn’t appear to be of the same standard. There’s simply no comparison: 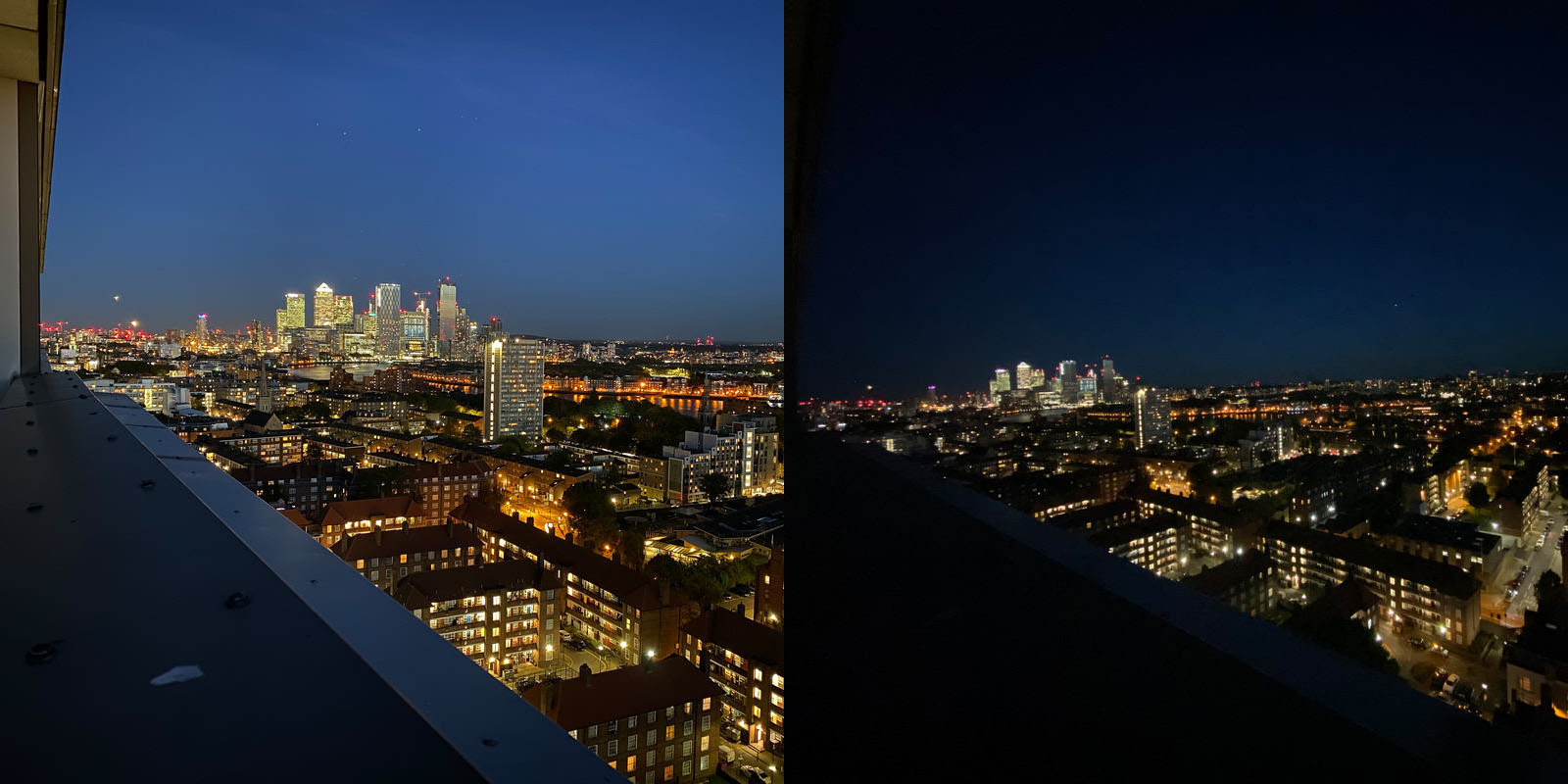 Both light-capture and sharpness are miles apart. The 0.5x version is like an iPhone camera from many generations ago.

However, it is very dependant on the light. Just 20 minutes earlier, when there was a little more light and I was shooting toward it, the 0.5x camera copes fine with light capture. Indeed, it actually captured more light in the foreground. Though it was still notably less sharp.

This also shows up for indoor shots, like this theater one. Here the iPhone has used the correct lens for each shot, and the 1x and 2x shots compare well: 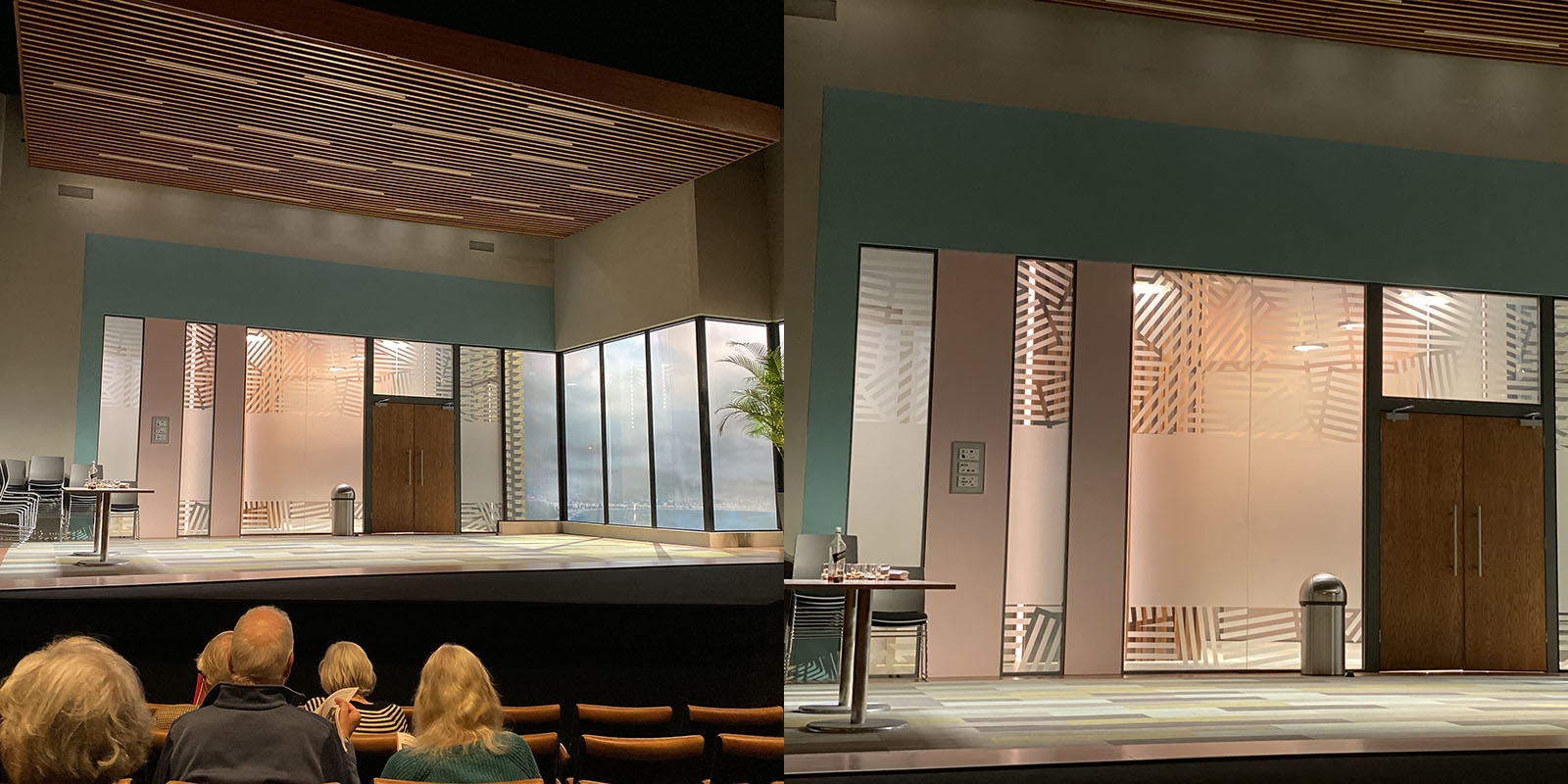 Even when I view 100% crops, there is little difference to be seen.

But it’s a whole different story with the 0.5x lens, compared here to the 1x: 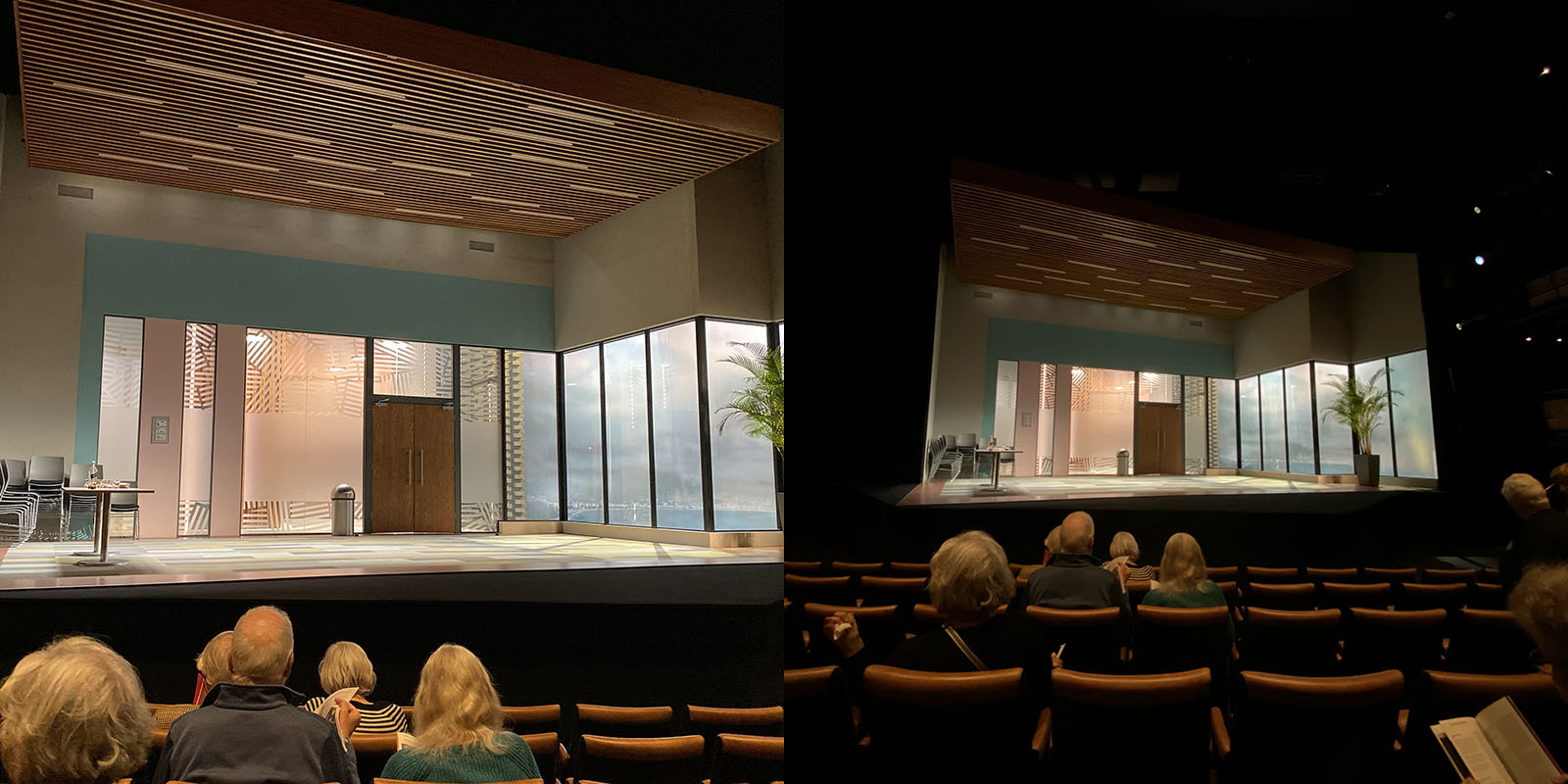 Even at web size, you can see the difference in light capture. There are similar differences in both sharpness and noise. Once more, it’s like a much earlier generation of iPhone camera.

The lesson here, then, is don’t try to use the ultra-wide-angle lens for iPhone night photos.

However, I am very much looking forward to using it in daylight, where I’m expecting very much better results. All I need now is some cooperative weather and a chance to use the cameras for more than just quick test shots…