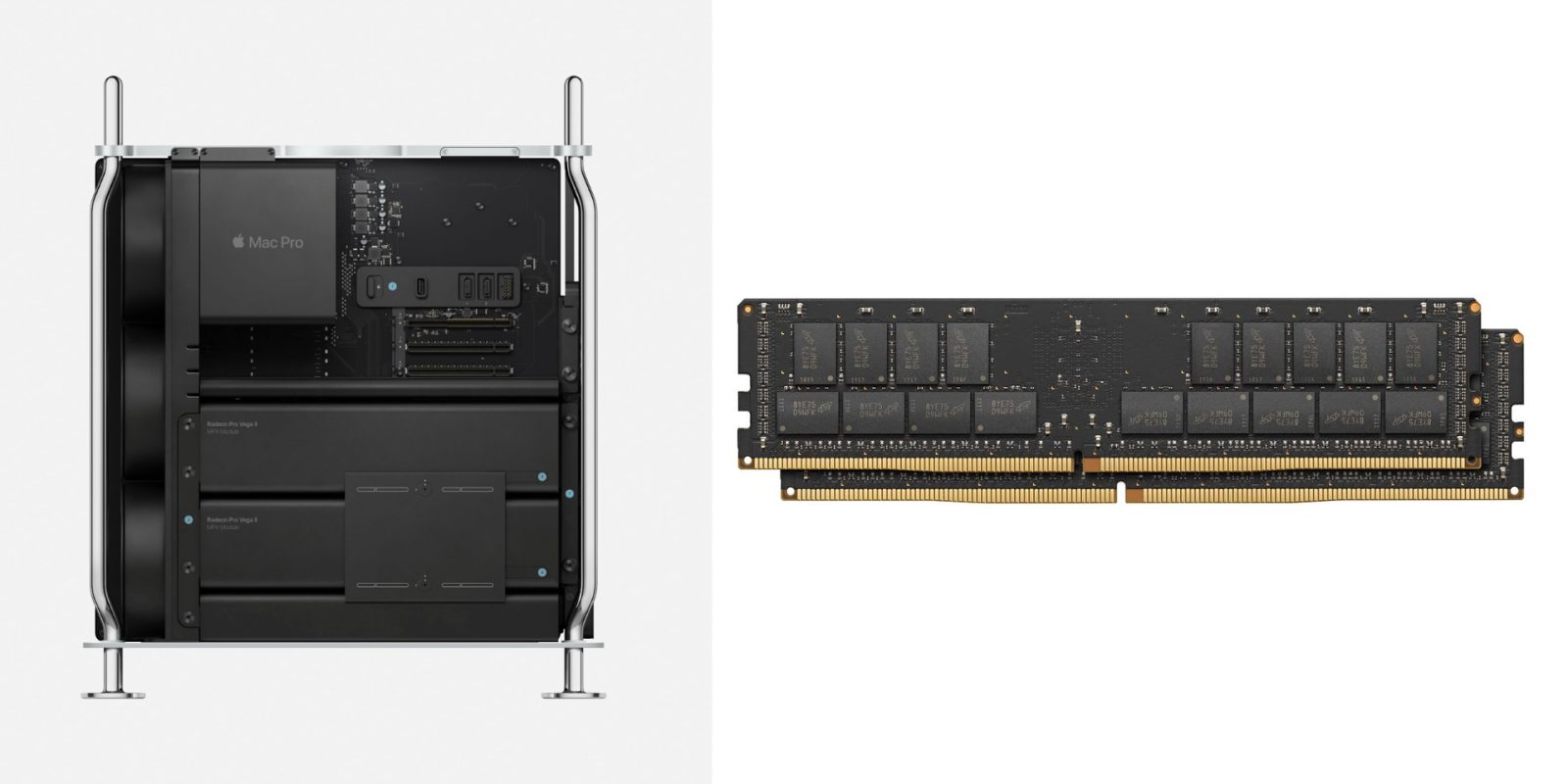 Apple is known to charge exorbitant prices for memory, and the just-released Mac Pro is no exception. For example, the Mac Pro comes with a base amount of 32GB of RAM in a 4x8GB configuration, but upgrading to 48GB costs $300 and quickly balloons to $1000 for 96GB of RAM.

But there may be good news in all of this. As has been the case for many years, it may be possible to utilize third-party RAM, which comes at a much more reasonable price. For example, this 64GB kit in a 2x32GB configuration from NEMIX RAM costs under $200, a $1000 savings over Apple’s kit.

One of the great things about the Mac Pro is its expandability. Pound for pound, even in its base configuration, I think it’s a much better buy than an iMac Pro, even without the built-in 5K display. More on that in a later post.

For RAM expansion, the Mac Pro simply can’t be beaten, with 12 DIMM slots that can house up to 1.5TB of RAM, that’s terabytes with a ‘t’, when utilizing top-end CPU configs. 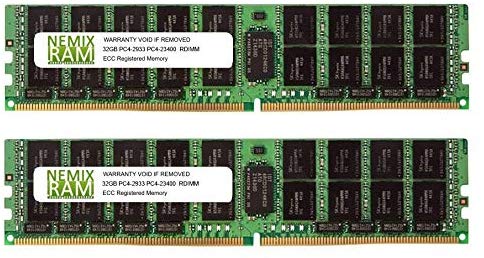 Is the substantial savings worth it? I can’t say 100% for sure without trying it, but chances are, these memory modules will work just as well. Needless to say, I’ll be testing this out soon in order to verify.

LR-DIMM modules have several benefits, with one key benefit being higher chip density. For example, all of the 64GB and higher DIMM modules that Apple sells are LR-DIMM modules. Modules with 32GB and lesser density are R-DIMM Modules.

Keep in mind that you cannot mix R-DIMM and LR-DIMM Modules. So if you wish to combine the memory that’s currently in your Mac Pro with RAM bought after the fact, you’ll need to make sure that it matches the type of RAM currently in your machine.

With that in mind, the 32GB chip density found in these Nemix kits are R-DIMM modules. Because of their lesser density, if you filled all 12 DIMM slots in the Mac Pro with these kits, you’d “only” max out to 384GB.

Like Apple, Nemix sells LR-DIMM kits with higher densities as well. For example, their 256GB RAM upgrade kit features 4x64GB modules and costs less than $1200. That’s right, for the price of a 64GB upgrade kit from Apple, you can get a 256GB upgrade kit.

Granted, Apple’s 256GB kit features a much denser 2x128GB configuration, giving you 10 remaining DIMM slots to use if desired. That would allow up to the aforementioned 1.5TB of RAM when paired with the top end CPU offerings.

A couple of lessons can be taken from this. First, If you have long term memory upgrade plans, it makes more sense to go with LR-DIMM modules, since they pack in more memory per chip, allowing you to add more DIMM modules to your Mac Pro.

Secondly, If you desire to use Apple memory, it’s cheaper to buy the memory during the build-to-order process. For example, 384GB of RAM in a 6x64GB build-to-order configuration costs $6000, while the same config from Apple purchased after the fact would be $8800. It’s not exactly oranges to oranges, because you’d still have the RAM left over from the initial build, but it makes sense to order RAM upfront if you’re okay with paying Apple’s premium. 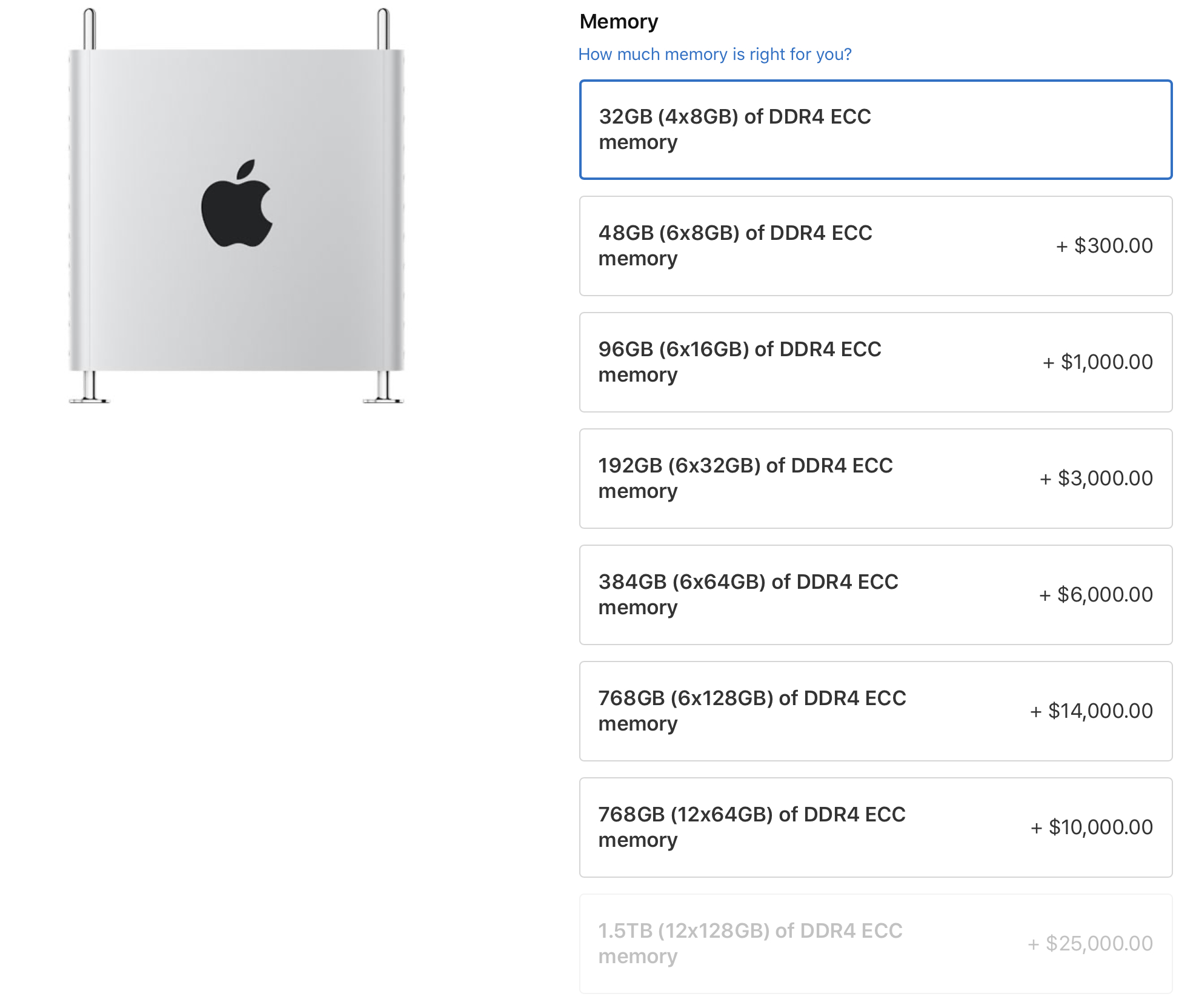 The point is, it probably makes more sense to buy your RAM upgrades from a reputable third-party. We’ve done it with the iMac, and the Mac mini in the past, and we’ll be doing the same thing with the Mac Pro.

As noted, I’m stopping short of recommending this upgrade yet until I try it myself, but I’ll be doing so soon, and will follow up with my findings.

We’ll be back soon with much more on the Mac Pro, including unboxing, a look at its top features, upgrades, opinions, and more. Stay tuned.